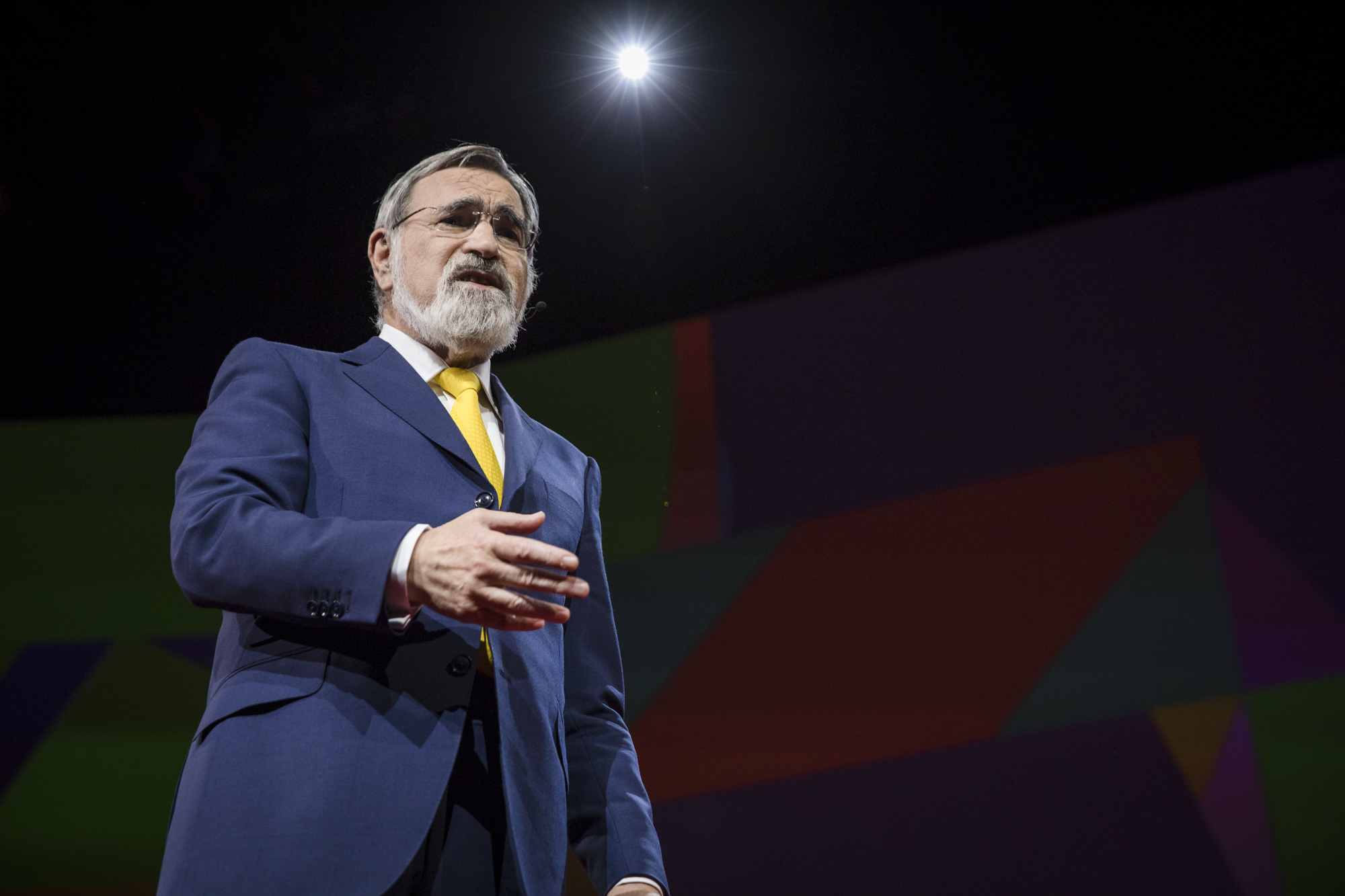 “These are the times that try men’s souls, and they’re trying ours now,” begins Rabbi Lord Jonathan Sacks, quoting Thomas Paine, in an electrifying talk about how we can face the future without fear if we face it together.

It’s a fateful moment in history. We’ve seen divisive elections, divided societies and a growth of extremism — all of it fueled by anxiety, uncertainty and fear. The world is changing faster than we can bear, and it’s looking like it’s going to continue changing faster still. Sacks asks: “Is there something we can do to face the future without fear?”

One way into this question is to look to what people worship. Some people worship many gods, some one, some none. In the 19th and 20th centuries, people worshiped the Aryan race, the Communist state and many other things. Future anthropologists, Sacks says, will take a look at the books we read on self-help, at how we talk about politics as a matter of individual rights, and at “our newest religious ritual: the selfie” — and conclude that we worship the self.

This worship of the self conflicts directly with our social nature, and with our need for friendship, trust, loyalty and love. As he says: “When we have too much of the ‘I’ and not enough of the ‘we,’ we find ourselves vulnerable, fearful and alone.”

To solve the most pressing issues of our time, Sacks says, we need to strengthen the future us in three dimensions: the “us of relationship,” the “us of responsibility” and the “us of identity.”

Starting with the “us of relationship,” Sacks takes us back to his undergraduate days studying the philosophy of Nietzsche, Schopenhauer, Sartre and Camus. Full of ontological uncertainty and existential angst, Sacks describes himself as self-obsessed and thoroughly unpleasant to know. Then he saw a girl who was everything he wasn’t. “She radiated sunshine, emanated joy,” he says. They met, talked and forty-seven years of marriage later, Sacks finds himself living proof that it’s the people not like us who make us grow. 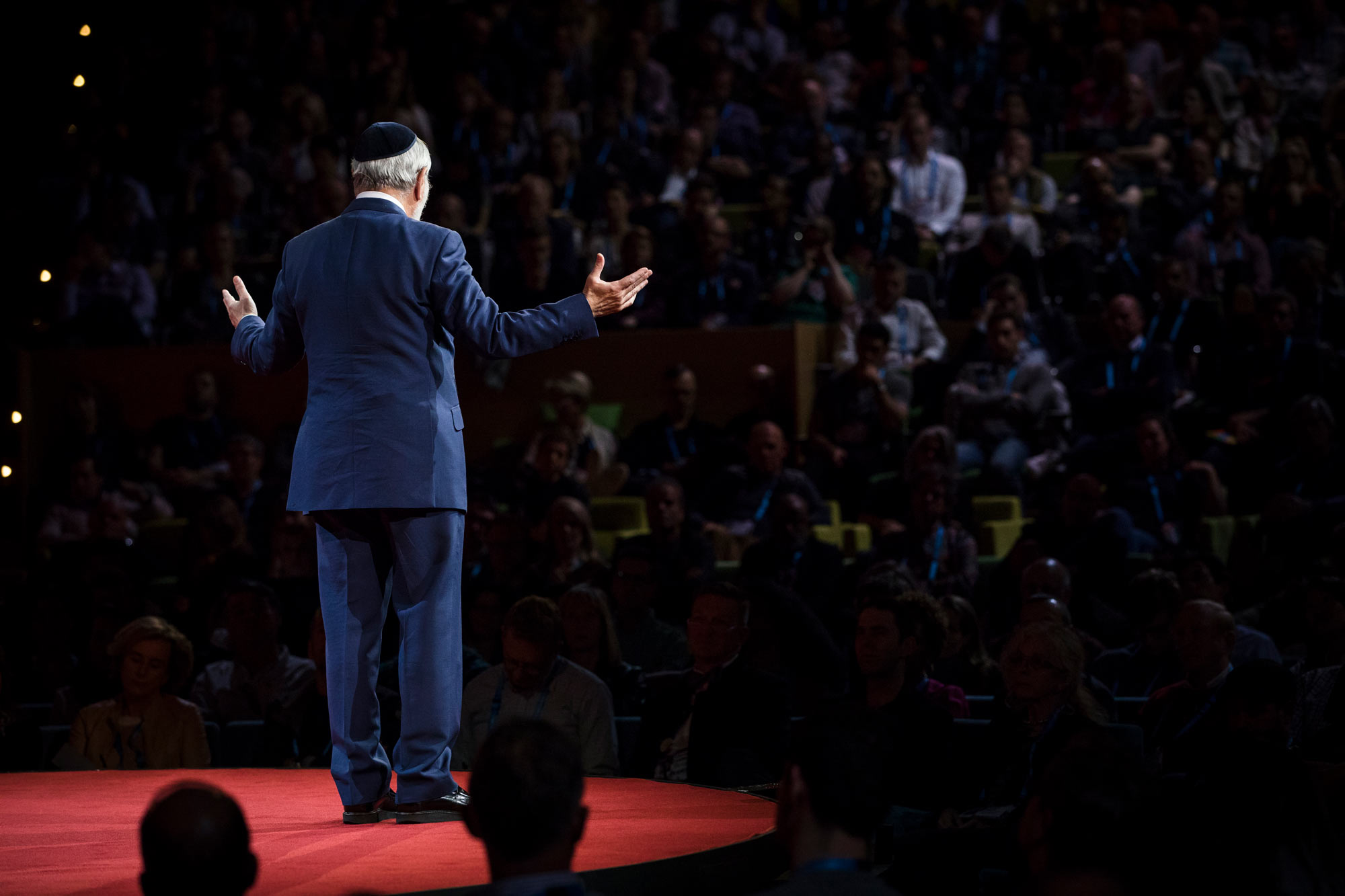 Rabbi Lord Jonathan Sacks: “The only people who will save us from ourselves is we, the people — all of us together.” He speaks at TED2017, April 24, 2017, Vancouver, BC, Canada. Photo: Ryan Lash / TED

In an age when narrowcasting, not broadcasting, dominates, and when we surround ourselves only with the ideas we feel comfortable with, our relationship with others suffers. “We need to renew those face-to-face encounters with the people not like us in order to realize that we can disagree strongly and still stay friends,” Sacks says. “In those encounters, we discover that the people not like us are just people, like us.”

Moving on to the “us of identity,” Sacks takes us to the memorials in Washington, DC, for American luminaries like Thomas Jefferson, Abraham Lincoln and Martin Luther King Jr. — all of which feature panels of text and quotes enshrined in stone and metal. In London, memorials are different, with very little text. Why the difference? Because America was largely a nation of immigrants; it had to create its identity by telling a story. The trouble is now that we’ve stopped telling the story of who we are and why, even in America, and immigration rates are higher than ever.

“When you tell the story and your identity is strong, you can welcome the strangers. But when you stop telling the story, your identity gets weak and you feel threatened by the stranger,” Sacks says. “We’ve got to get back to telling our story — who we are, where we came from, what are the ideals by which we live.”

Finally, the “us of responsibility.” Sacks finds that we’ve fallen into “magical thinking” when we believe that electing a particular strong leader will solve all of our problems. When this kind of thinking dominates, we fall for extremism — on the far right or far left, in the extreme religious or extreme anti-religious.

Sacks leaves us with a simple suggestion: “Do a search-and-replace operation on the text of your mind. Wherever you encounter the word ‘self,’ substitute the word ‘other.’ Instead of self-help, other-help. Instead of self-esteem, other-esteem. We can face any future without fear so long as we know that we won’t face it alone.”