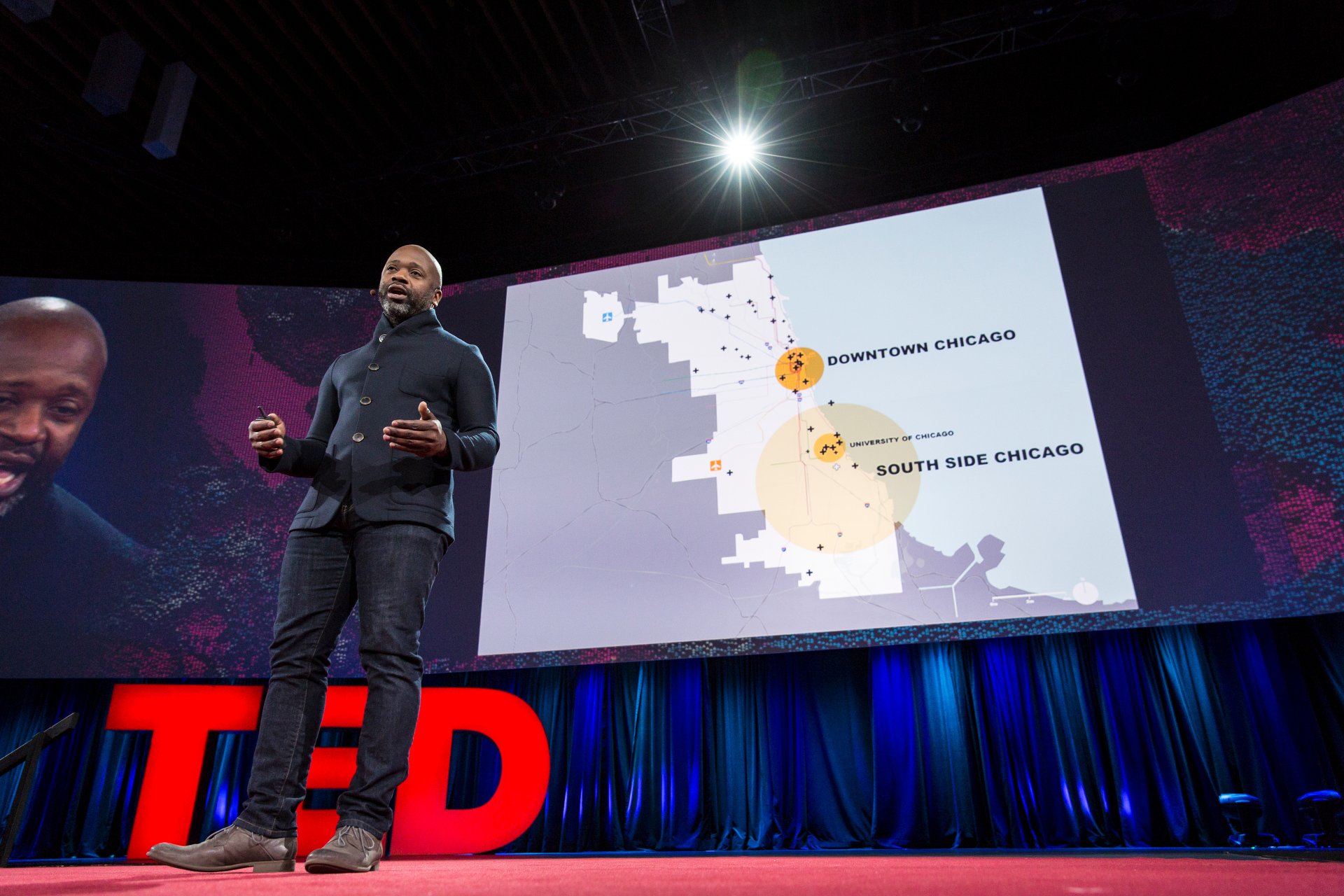 Theaster Gates speaks on bringing a neighborhood back to life with beauty, imagination, and art. Photo: Bret Hartman/TED

“Beauty is a basic service,” says artist Theaster Gates. He brought the audience to its feet this morning during Creative Ignition at TED, as he told the story of how he went from shaper of clay to shaper of cities.

For fifteen years Gates made pots, “which might seem like a humble vocation,” he says. But in this work, “You very quickly learn how to make great things out of nothing.” When Gates’ father retired from roofing at 80, for example, he gave his son his tar kettle. The younger Gates reimagined this low “nothing material” and elevated it, turning the tar into a series of paintings.

Gates then turned his sights to a different material: the crumbling neighborhood of Grand Crossing on Chicago’s South Side. Gates was disheartened by failing houses there — what he calls “the challenge of blight” — and he wondered, “Could I think of these buildings as an extension or expansion of my art?”

Gates bought one of the houses for $18,000 to try and “trick it out” … except then he ran out of money. So, again with nothing, he created a performance piece of him cleaning the house: “The broom was free, and the sweeping was free.”

Eventually this became known as the Archive House, a place to preserve the history of the neighborhood and inspire conversations with artists and community members. Following its success Gates took up two surrounding buildings, which became the Listening House and the Black Cinema House, which he turned from a crack house to a film-screening center. The demand for the Black Cinema House grew so big Gates had to expand to a new building. “It was,” he says, “a much larger piece of clay.”

Currently Gates is working on the Stony Island Arts Bank Project, which at its start was a dilapidated abandoned bank with six feet of standing water. “Nothing had happened there,” he said. “It was dirt. It was nothing.” Now Gates is setting to work turning the bank into a performing arts center.

“We brought some heat, we kind of made a fire,” he says of his efforts. Gates hopes someday to connect the land between his different renovation projects and add greenery, to “land a miniature Versailles on top.” He hopes it will be “a pretty hardcore node of cultural activity.”

But how do you ensure that these programs remain useful to the people they’re intended for? How do you keep wealthy people from coopting art spaces? Says Gates, it’s a legitimate challenge. After all, land owners and land renters aren’t the same people. “You need entities that are not just interested in the development piece, but the stabilization piece,” he says.

In his career Gates has gone from thinking about “a bowl, to a singular house, to a block, to a neighborhood, to a cultural district to thinking about a whole city.” And while he can’t export himself to other cities, he urges passionate people to start centers in their own communities. Think not just about the individual project, he says, like one isolated old house, but about “the relationship between that house, a nearby school, a bodega. Can you get those folks talking?” When you face a neighborhood that’s failed, says Gates, they often still have a pulse. Find it.