Worldwide, nearly one out of every hundred children is born with a congenital heart disease, which can vary from defective vessels and leaky valves, to holes in the heart. Dr. Franz Freudenthal (TED Talk: A new way to heal hearts without surgery) deals in the latter as a pediatric cardiologist who has developed a better, invasive surgery-free alternative to close these life-threatening cavities.

So, when a baby is born with a hole in its heart, what happens and how do you fix it?

For a hole in the heart to develop, prematurity and genetic conditions tend to be the leading cause. A baby in the womb does not breathe and relies on the mother until it takes first breaths at birth, which signals major changes to take place in the body — especially within the cardiovascular and respiratory systems. Breathing, a new experience for the baby, stimulates some vessels in the heart to close. However, this is not always the case, and abnormal communication between atria can leave passages underdeveloped and gaping.

“When you look at patients with this condition, they seem desperate to breathe,” says Freudenthal. “To close the hole, major surgery used to be the only solution.”

Decades of research reveals that lack of oxygen can also be to blame. In high-altitude locations where air is thin, such as the mountainous regions of Freudenthal’s native Bolivia, the frequency of this kind of heart defect increases dramatically. For high-altitude patients, the holes tend to be more severe due to a larger gap between arteries. 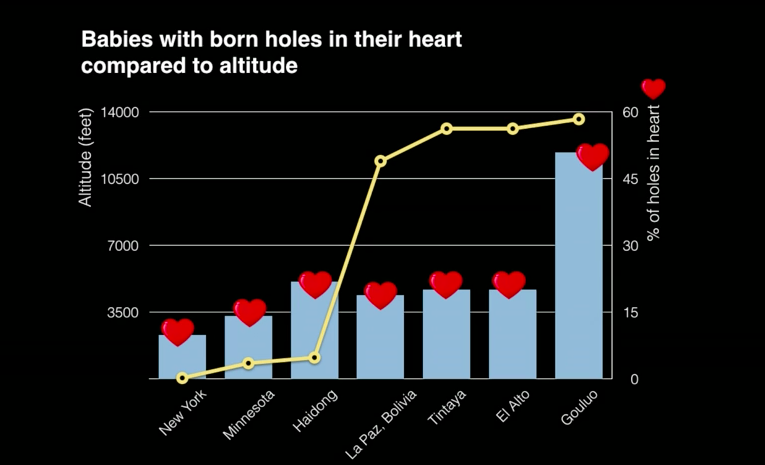 The first of many breakthroughs for a non-invasive mechanism to solve these kinds of heart defects came to Freudenthal during his time in medical school, brainstorming with a classmate while they camped in the Amazon. As they were building their fire, adding kindling to feed the flames, he noticed something that piqued his scientific curiosity.

“The only thing that would not burn in the fire was a green avocado branch,” he says. “Then came a moment of inspiration. So, we used the branch as a mold for our first invention.”

Filling hearts, one hole at a time

Observing the properties of the green avocado branch as it reacted to the flames was a great place to start. The fact that the branch withstood the heat of the fire allowed Freudenthal to look for a metal that could replicate its properties under similar conditions. He eventually landed on a smart material called Nitinol. Made of a nickel-titanium alloy, Nitinol has two unique properties that are incredibly useful in biomedical applications: It can be worked into unique shapes and retain them; and it’s superelastic, meaning that when it’s stretched or flattened, it needs no heating in order to regain its original form.

“I knew this material was ideal since it keeps its shape,” he says. “This is why the device can be transported into the body inside a tube [implantation catheter]. It can be deployed in the right spot inside the heart, recovering its ‘memorized’ shape.”

From that discovery came thousands of hours of lab work, numerous in-vitro and in-vivo studies, and a persistent enthusiasm to unravel such a complex issue. It was a lengthy, demanding process on the road to creating a prototype, a specialized piece of wire coiled into into the shape of a plug that could be be transferred through a catheter to wherever in the heart it is needed, neatly plugging the hole.

However, an issue arose when Freudenthal and Dr. Alexandra Heath, his wife and partner, realized the device could only service patients below a certain altitude level. Many of their patients lived at 12,000 feet above sea level and had extra-wide gaps in their arteries — larger than the plug of coiled-up wire could cover.

“The first coil could successfully treat only half of the patients in Bolivia,” Freudenthal says. “The search started again. We went back to the drawing board.”

After many trials and several iterations, a key development came from an unlikely source — the loom-weaving technique of the native Andes peoples. Freudenthal’s grandmother, Dr. Ruth Tichauer, a Jewish refugee who resettled in the heart of the Andes mountains, had worked closely — and Freudenthal alongside her, growing up — with remote indigenous communities, and that connection proved ever more fruitful.

For centuries, the women of these communities told stories by weaving complex patterns using looms. With Freudenthal’s vision, instead of fabric yarn, the women carefully weave Nitinol.

“We take this traditional method of weaving and make a design,” Freudenthal says. “The weaving allows us to create a seamless device that doesn’t rust because it’s made of only one piece. It can change by itself into very complex structures.”

From this insight evolved the Nit-Occlud ASD-R system and a way to fix a baby’s heart without major invasive surgery.

As seen above, the device enters the heart through the body’s natural channels via the implantation catheter and expands, placing itself before closing the hole. From start to finish, the entire procedure takes 30 minutes to complete.

After a few days, heart tissue begins to grow over the device — a process called epithelialization — eventually covering it entirely. If the hole is not too large to warrant further surgery, the implant stays as part of the child’s heart for the rest of their life.

“We are so proud that some of our former patients are part of our team,” Freudenthal shares. “We receive strength from our patients — their resilience and courage inspire our creativity.”

Right now, Freudenthal’s company PFM SRL has the Nit-Occlud ASD-R system registered in around 60 countries and estimates it has saved the lives of some 2,500 children.