Body image, beauty and bullying. In TED-Ed Clubs, students are guided through the process of making a presentation on an idea they feel passionate about — and dozens of students in clubs around the world have boldly chosen to talk about how to combat negative body image, distorted images of beauty and the bullying that springs from rigid rules about appearance.

Watch — but more important, listen — to these three inspiring perspectives on body image, beauty and bullying from teenagers in three different countries. 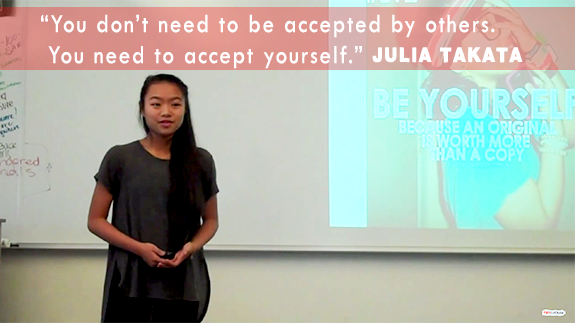 A presentation on body image: A competition with yourself

Julia Takata starts her presentation by recalling an experience she had in dance class. The short story: She started comparing herself to a classmate. “Because I was younger, I was very susceptible to what other people had to say about me. [I kept wondering], ‘How I could change myself?’” says Takata, a student in the TED-Ed Club at the Punahou Summer School in Honolulu, Hawaii. “What I didn’t realize was: I was letting someone who barely knew me tell me who I was.”

Takata sees a connection between this experience and eating disorders, which she thinks of as “your mind having a competition with your body.” “It’s a constant battle between being skinny and being well-nourished. During this battle, your body is really taking a beating,” she says. “All of this to achieve what society often portrays as beautiful.”

“But you don’t have to be skinny to be beautiful,” she says. “To be beautiful means to be yourself. You don’t need to be accepted by others. You need to accept yourself.” 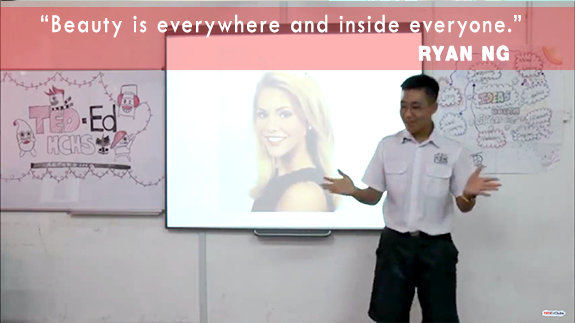 A presentation on beauty: What is it exactly?

In a presentation on the meaning of the word ”beauty,” Ryan Ng from the Han Chiang High School in Penang, Malaysia, asks a simple and honest question: “Why put so much importance and value on the way we look?”

Ng takes aim at our modern ideas of beauty, which lead people to constant self-evaluation. He shares his thoughts on plastic surgery, beauty pageants and the television show The Swan. “‘Beauty’ is one of the most overused, misunderstood, poorly defined words in the English language,” he says. “If no one can define beauty, then how can someone or something be ugly?” 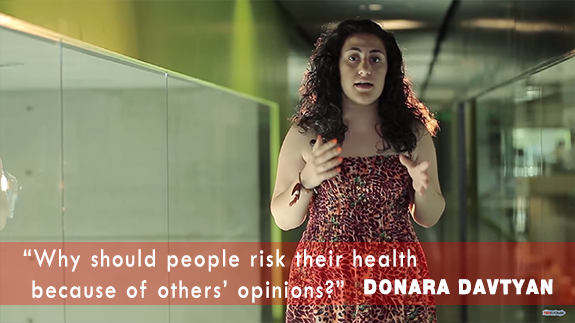 A presentation on bullying: It’s often focused on appearance

“The main reason for bullying is appearance,” says Donara Davtyan, a high school student at the Tumo Center for Creative Technologies in Yerevan, Armenia. In her TED-Ed Clubs presentation, she explores what happens when teenagers pick on each other for the way they look. “I think bullying people for their appearance is one of the most stupid and inhumane things, as one doesn’t choose how they are born,” she says.

Davtyan has experienced this herself. “My classmates say that I have a big nose, but you know what, my big nose isn’t their problem,” she says. She knows she isn’t alone — Lady Gaga has talked about being bullied for her looks, and in an informal survey of her friends, Davtyan found that about half had been bullied.

“It’s time to understand that we shouldn’t change our appearance, but our thinking and behavior,” she says. “Your nose isn’t big — you just breathe better than others.”

These three TED-Ed Club members represent a fraction of the more than 10,000 students now sharing and presenting their ideas in TED-Ed Clubs around the world. Interested in starting a TED-Ed Club at your school? Find out more.