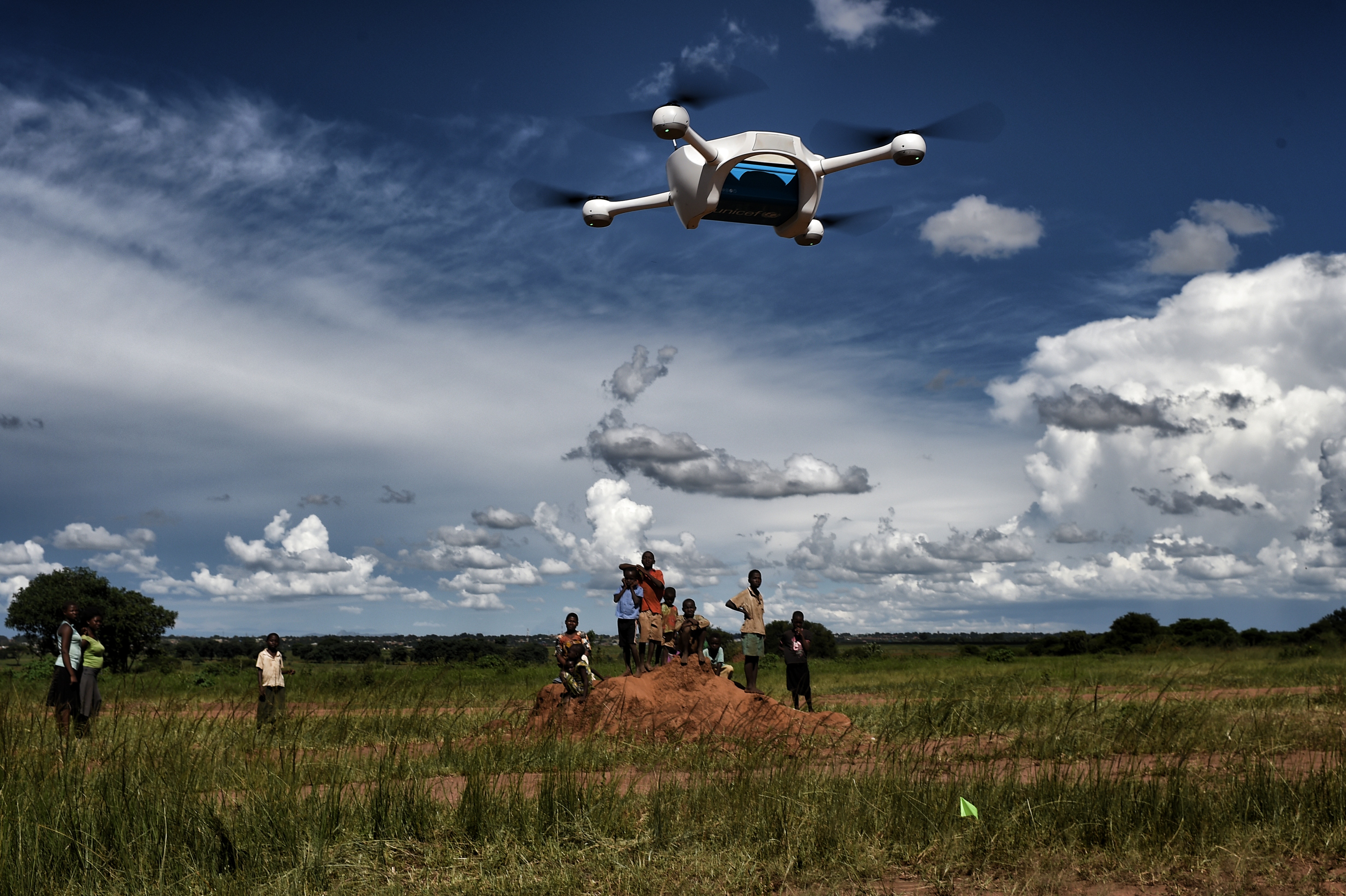 In Katete, a community in Malawi’s capital, Lilongwe, a group of residents watch a test flight of a new drone from Matternet that could, someday soon, deliver test results for newborn babies in their town. Photo: Aris Messinis for Matternet

Drones are the sexy, mysterious tech craze that are often a butt of a joke, a vague solution or an ominous threat. But no matter how flashy, good technology should still solve concrete problems. Amid the hype of getting packages and pizzas delivered in half the time, what if drones could revolutionize transportation networks, connecting people to what they actually need the most?

The health of a community relies on efficient networks. Medicine and medical supplies need to be transported reliably from Point A to Point B. This, in turn, relies on roads to travel on. Sturdy roads, able to endure heavy rains and bad weather, are something many in developed countries take for granted. But worldwide, a staggering one billion people lack access to all-season roads. What that means for people who live in remote villages: a simple rainstorm can turn a dirt road into a muddy and impassable mess, cutting them off from vital goods, services and medicines.

A surprising new technology might make a difference. Andreas Raptopoulos (watch his TED Talk) and Paola Santana co-founded Matternet, a company that adds smart software to nimble drones. Their signature product, Matternet ONE, can carry 1 kilogram of cargo over 15-20 kilometers on a single battery charge.

Matternet has worked with WHO in Bhutan to deliver medical supplies to remote hospitals, and with MSF (Doctors Without Borders) in Papua New Guinea to transport medical tests for tuberculosis.

In March 2016, Matternet started tests, along with UNICEF, in Malawi to see how well drones could deliver medical tests and blood samples from remote villages to labs. They’re working with the Malawian government to see if the drones could reduce the wait times for HIV test results, specifically for infants. 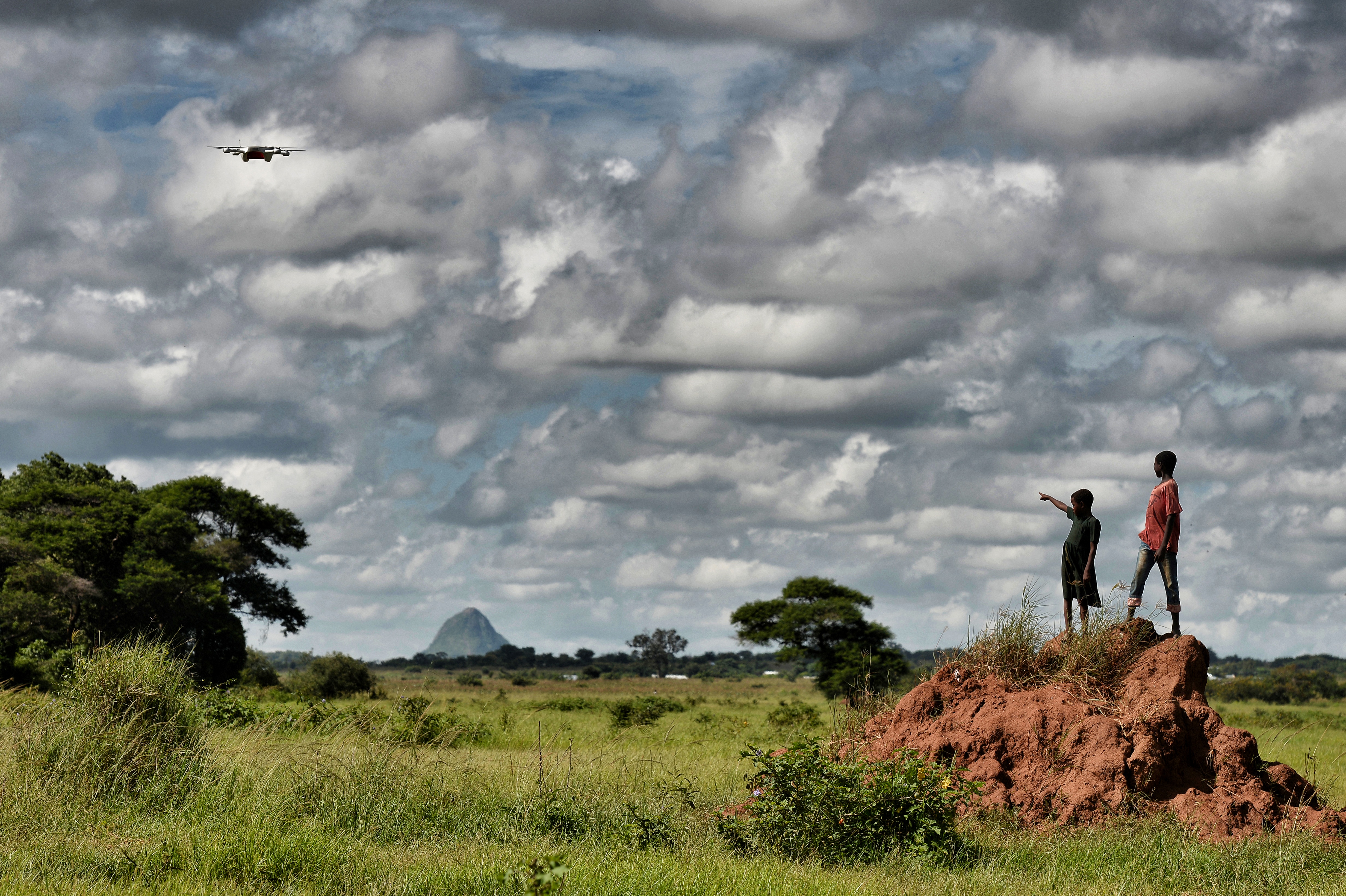 An estimated one million people in Malawi live with the disease, as of 2014. Testing — and regular medication — is crucial to survival, and yet it takes an average of 11 days to deliver supplies from health centers to labs and eight weeks to return test results. Also, according to Raptopoulos, “More than three-quarters of them are within 20 kilometers of each other or a diagnostic lab.” Using drones could dramatically speed up this process and solve the problem of distance.

The first step to solving a problem is assessing what’s already happening. Paola Santana, who is also the Head of Network Operations and Lead Coordinator for this project, studied Malawi’s current system for transporting HIV tests. “There is someone on a motorcycle or in a car that does a circuit every day. They need to go and select the number of labs where they start in the morning, and by the afternoon, they have picked up all of these samples from these clinics. Then they go to the hospital where these samples are going to be analyzed,” she says. The problem is, though, that these routes are outdated. “These circuits have been created based on data that has been there for a while. So imagine that as populations shift, more people now live in other areas that are not being served every day. Still, the logistics circuit stays the same.” 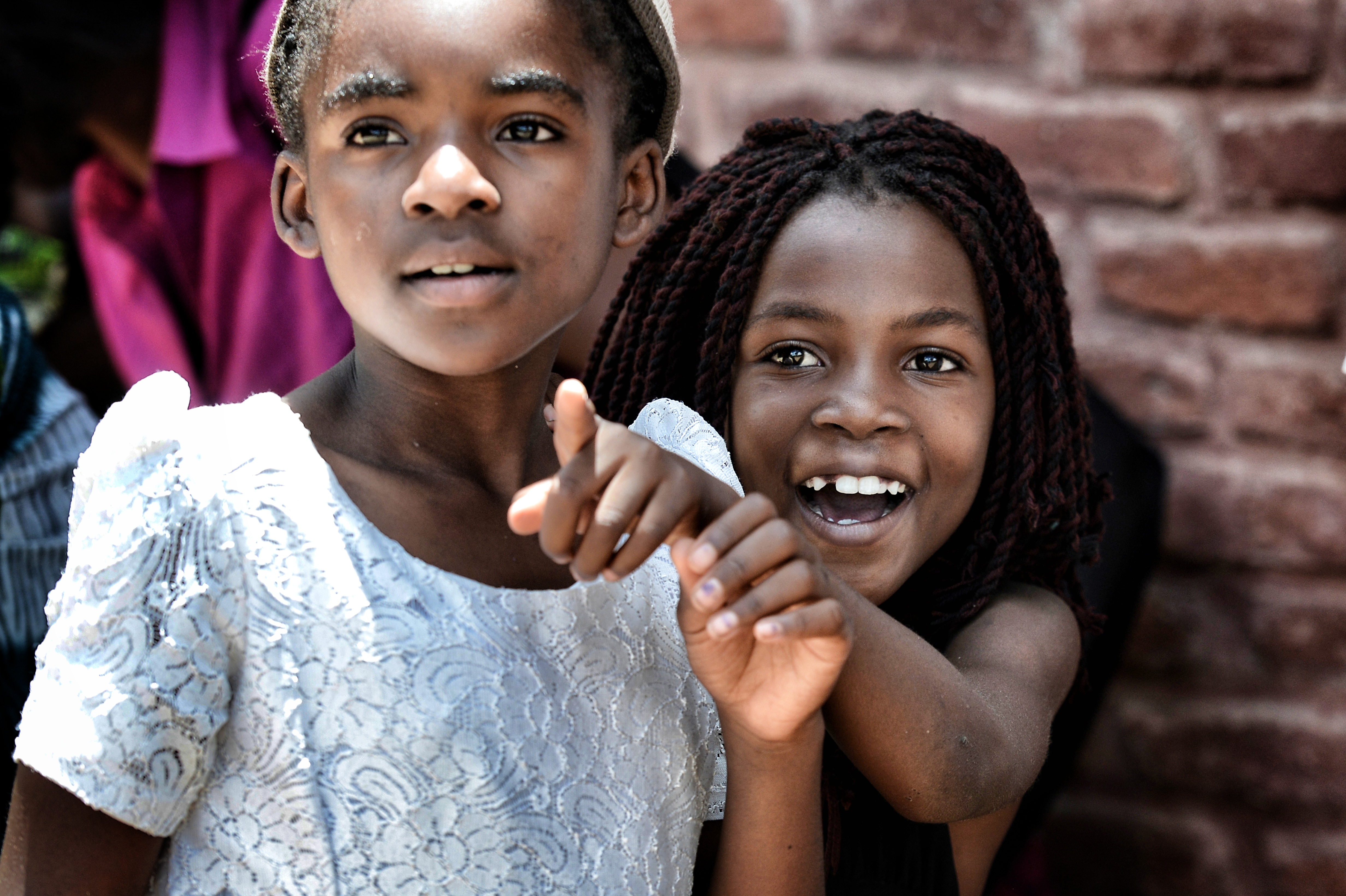 Logistics, she says, need to account for how people are moving, how outbreaks are spreading and how many samples are transported in real time. That way, a regular and efficient system is created, one that can transport tests once a day, as opposed to once a week or even twice a month, which is the current norm.

With this data, Santana and her team clearly understood the task at hand. “The challenge is trying to envision how the system should work that has nothing to do with how the system works today. How do we adapt the flow of logistics to a new technology?”

Working with Malawi’s Ministry of Health, Department of Civil Aviation and Ministry of Transportation, among others, Matternet first mapped the geography of the approved flying area. Then, they entered the data into the software so that any obstacles could be accounted for in determining the safest and most effective routes.

Through the app, a user can select the landing location and command the drone to take off. Because it flies at around 400 feet, a user can also track its course on the app and get a notification when it lands.

This means that in the future, lab technicians could autonomously use the app to send HIV tests from their remote villages to central hospitals, and get the results back in a timely manner. 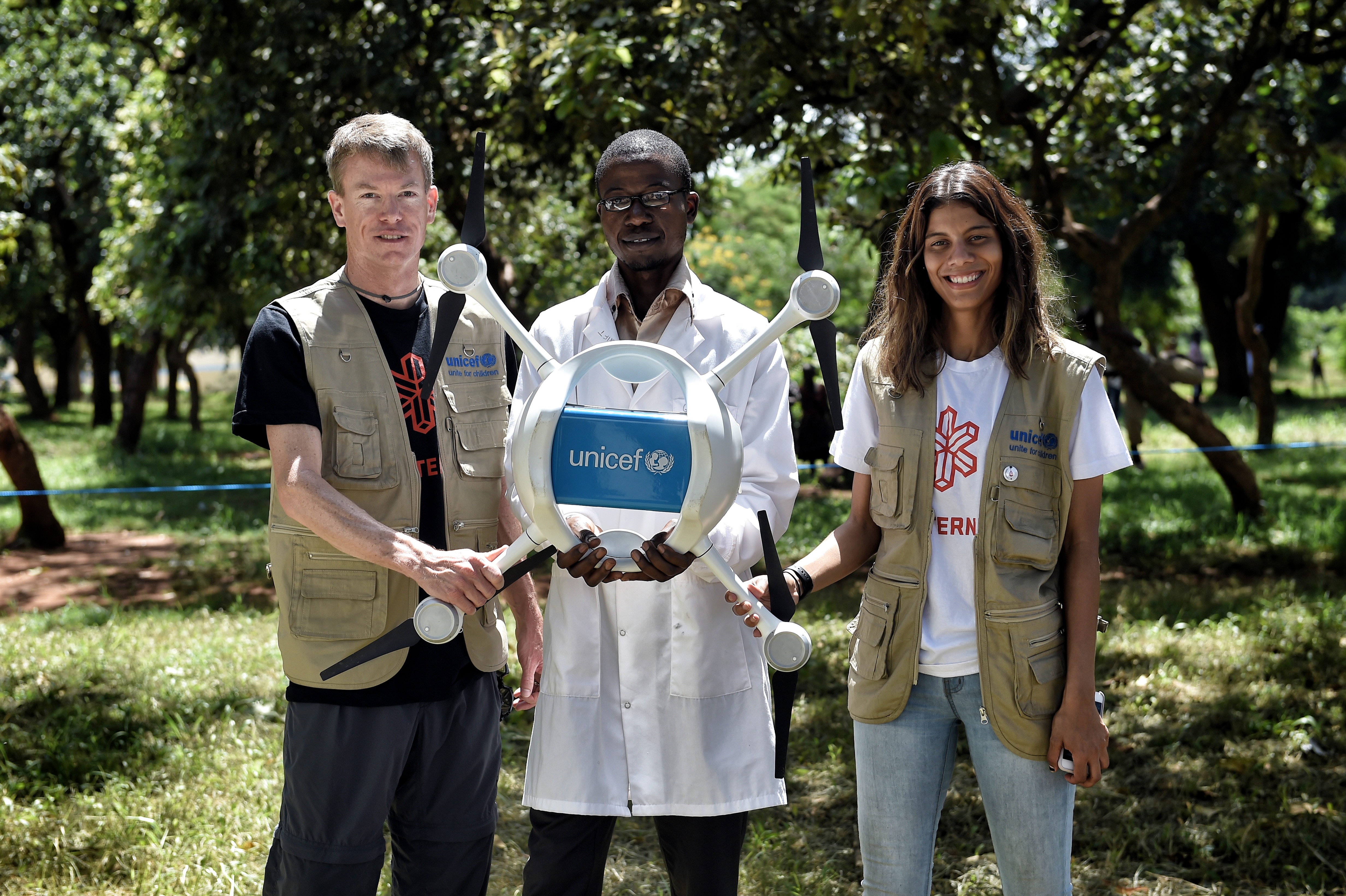 Santana and her team were in Lilongwe, Malawi, for a total of two weeks. During the first half of the trip, they worked from 8am to 5pm every day to acclimate the drones to the new geography and make sure they could fly safely over densely populated areas. “The goal was to collect diagnostics from Area 25 Health Center and Area 18 Health Center to the Kamuzu Central Hospital to be analyzed,” Santana says.

As they prepped, Matternet, UNICEF and Malawi’s Ministry of Information hosted hands-on sessions and a Community Demo Day so that the locals could see how the drones work and learn what they’d be carrying. These demos also stressed the importance of HIV awareness, getting tested and taking antiretrovirals. 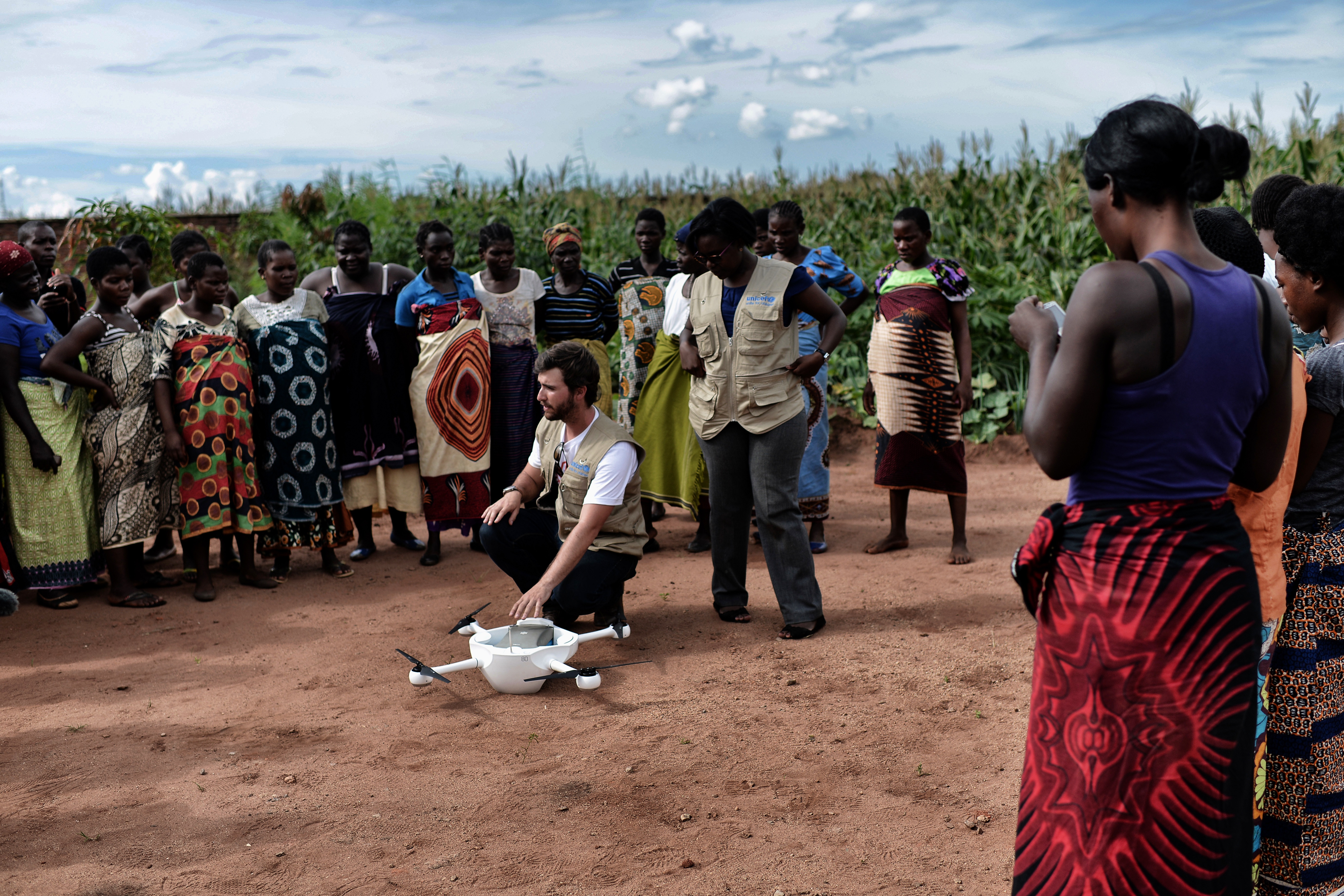 At Kamuzu Central Hospital, UAV technician Brandon Landry speaks to a group of moms-to-be, showing how the drone works and what it will be carrying: HIV tests for infants. Photo: Aris Messinis for Matternet 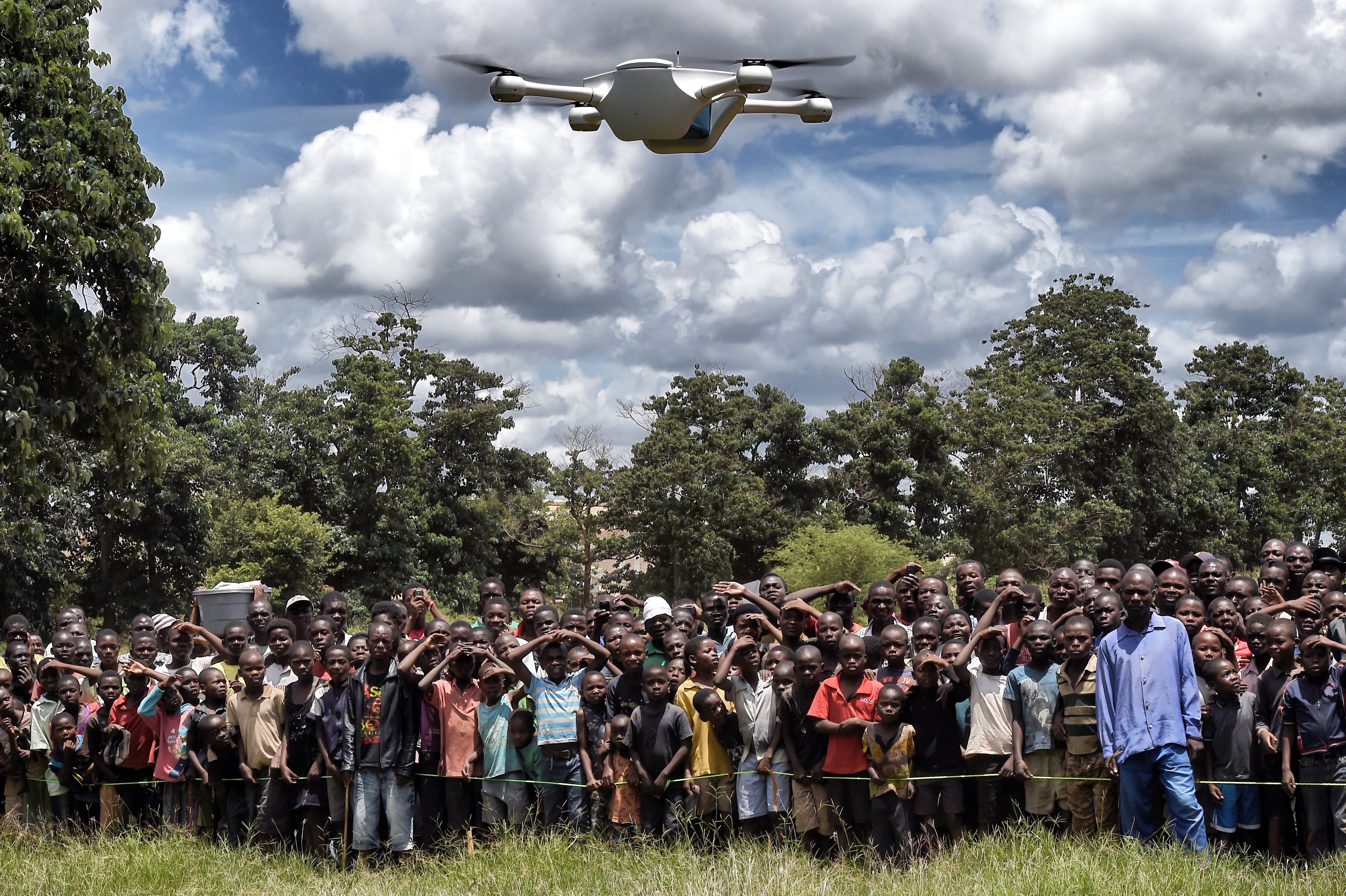 The next week, they conducted the first official test launch. The drone completed a 10-kilometer journey from Area 25 Health Center to Kamuzu Central Hospital, a journey UNICEF calls the “first known use of UAVs [unmanned aerial vehicles] on the continent for improvement of HIV services.” 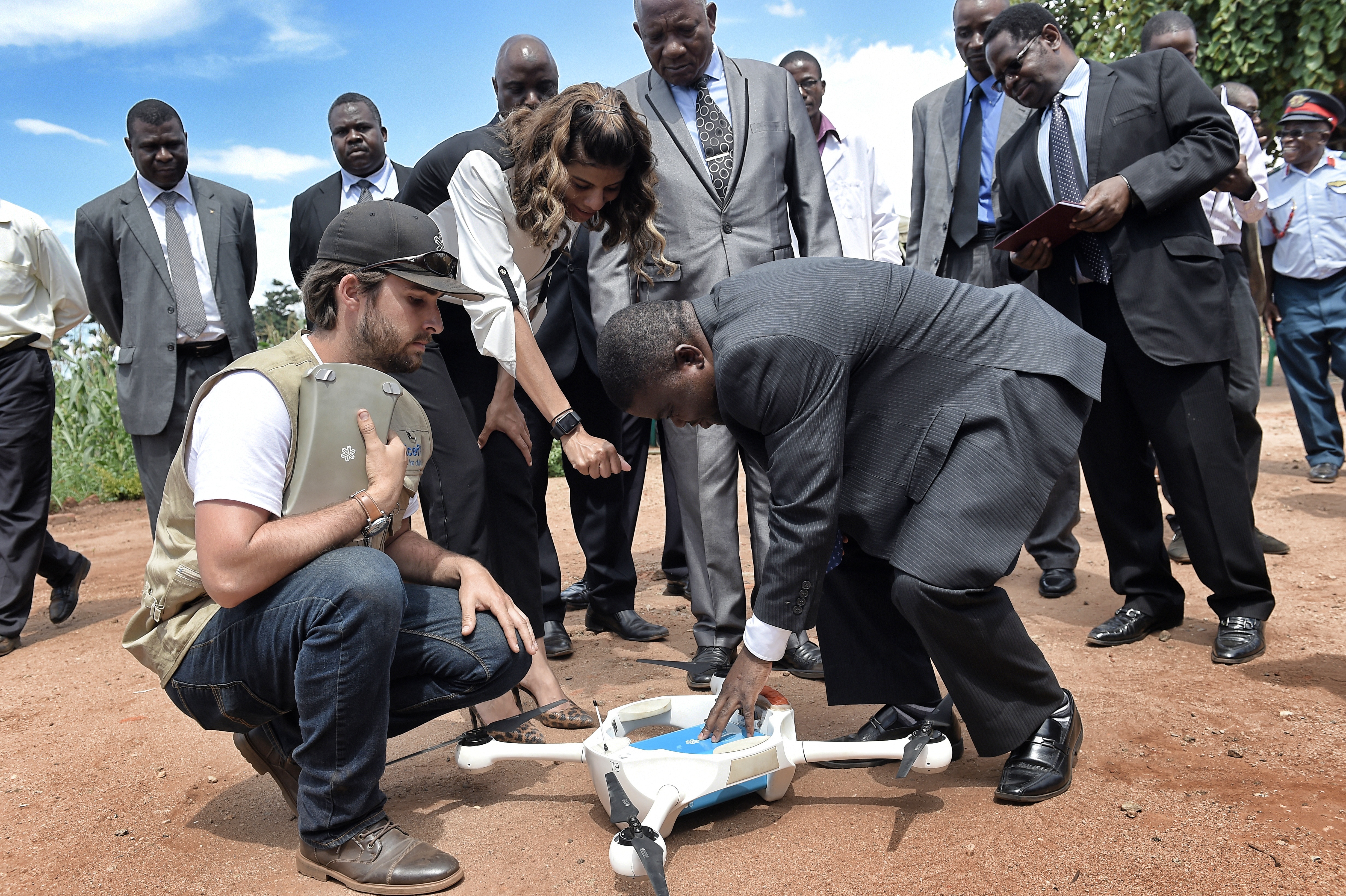 On the day of the inaugural test launch at Kamuzu Central Hospital, Dr. Peter Kumpalume, Malawi’s Minister of Health, works with drone technician Brandon Landry to get ready for launch. Photo: Aris Messinis for Matternet

Malawi’s Minister of Health, Peter Kumpalume, praised the launch as a huge step forward in the country’s fight against HIV/AIDS. “We are at the forefront of technology. The countdown to ending HIV/Aids has begun and today is another step forward in meeting that goal.”

UNICEF’s Malawi representative, Mahimbo Mdoe, also remarked on the implications for transportation in the country. “HIV is still a barrier to development in Malawi. This innovation could be the breakthrough in overcoming transport challenges and associated delays experienced by health workers in remote areas of Malawi.”

What’s next? UNICEF, the Malawian government and other partners are assessing the results of the feasibility study. This way, they can look at impact before moving on to any subsequent phases.