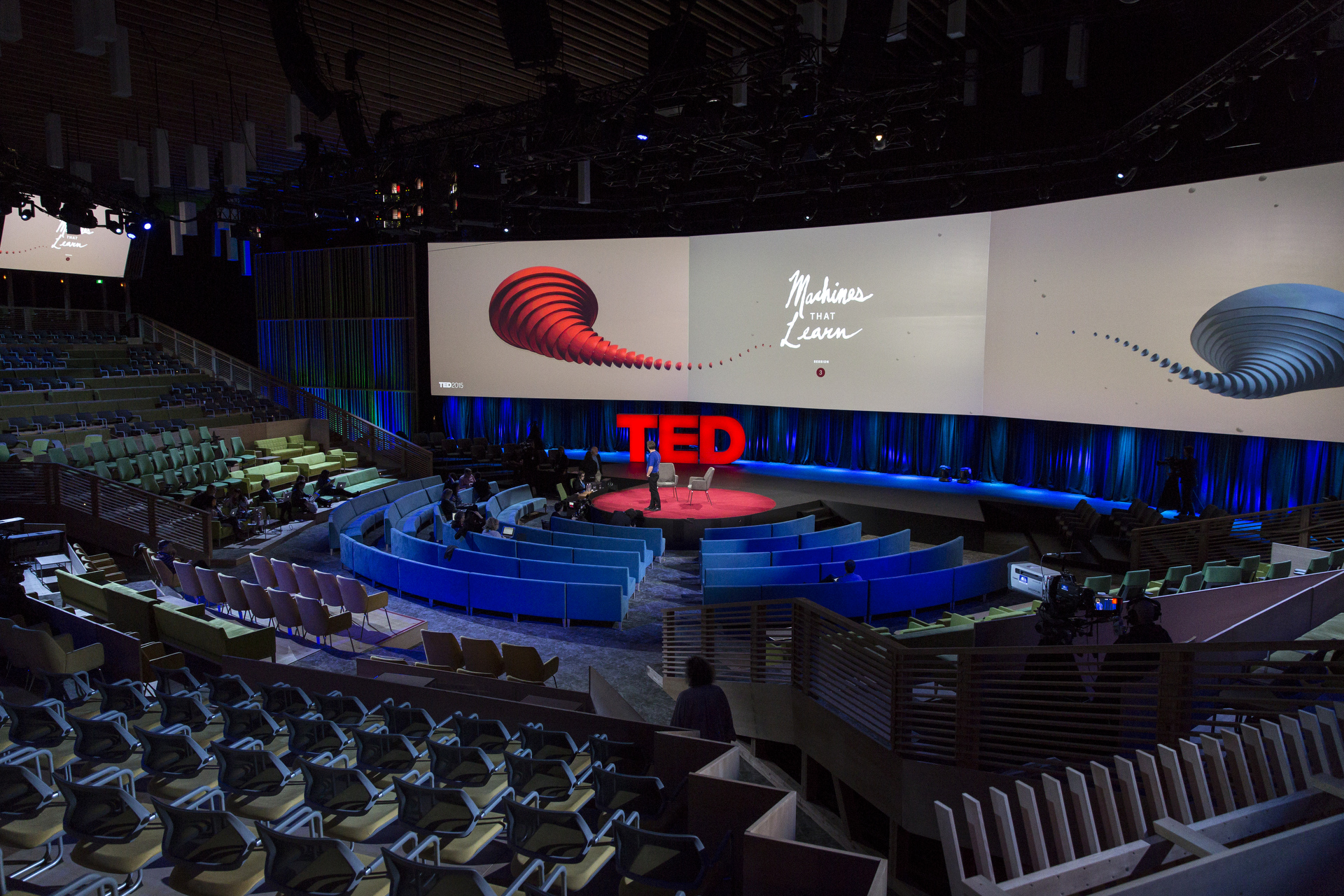 A look at the TED2015 theater. A slight revision of last year’s design, it features more compact seating, a slightly smaller stage and lots of new lighting options to make each talk unique. Photo: Bret Hartman/TED

In 2014, architect David Rockwell and his team created a custom theater to celebrate talk, designed to be assembled in just a few days inside a large empty ballroom at the Vancouver Convention Center. Post-show, the theater was taken apart and warehoused. But it was not dormant — Rockwell and team spent the year thinking about how to make TED’s pop-up theater even better for 2015.

“I spent most of the [TED2014] conference sitting in different seats to get a variety of viewpoints,” says Rockwell. “And we had a few conversations with Chris Anderson in the past year to hone in on how to solve some key things.”

The pop-up TED theater was designed to create a sense of intimacy. The idea was to create a circular stage with the audience wrapping a full 180 degrees around it, and to have all the seating levels raked so that the distance between the speaker on stage and the last row was never more than 80 feet.

“It has this immersive, intimate quality that worked really well,” says Rockwell. “And we decided, in fact, that a little bit more compression would be good.”

This year, the team has added 130 seats to the design, working with Steelcase on some furniture updates. There’s an entire new row of “ringside seating” that wraps around the stage. The team also got rid of a section of reclining chairs just beyond it, and replaced it with couch seating that will allow more people to pack into the space.

“We wanted this middle section to be a more populated area,” says Rockwell. “We wanted the audience members in the speaker’s direct line of sight to not be leaning back so much.”

Finally, they added more stools in the back of the theater in the laptop zone. “Those were much more popular than we expected them to be,” says Rockwell. “We added footrests to make them a bit more comfortable.”

Overall, the team upped the seated capacity of the theater from 1257 to 1385, plus standing room in the back.

Watch a timelapse of our pop-up theater being assembled for TED2014. This year, the process has gone much quicker than anticipated.

Rockwell Group made room for this increased seating density by shrinking the half-round thrust stage, from 24 feet in diameter to 16 feet. While this might sound like a big difference, the effect will be subtle, says Rockwell. “I don’t think the audience will be overtly aware,” he says, “But I think they might perceive a tighter focus.”

The big difference here will be for speakers. “I think what the speaker will be aware of is, in a comforting way, having a little less room to wander,” he says. “We think the greater density will allow the speaker to make contact with a greater number of the people in the audience.”

The TED2014 stage was very simple — there was no set, but instead three large screens behind a speaker. This has stayed the same for TED2015. However, this year, there was a desire to have more options to subtly make talks look visually discernible. The solution: a fabric scrim underneath the screens, which light can be shown onto.

“That will allow the lighting to be different for every presentation,” says Rockwell. “It will allow some customization of the visuals and for there to be greater visual variety.”

The lighting of the outside of the theater will also be different at TED2015. The outside of our pop-up theater is intentionally raw, as Rockwell puts it, “so you actually see the underside of the building.” Last year’s audience loved the scaffold-like exterior, and so the lighting design this year will play it up.

“People really enjoyed the outside of the space — the anticipation it signaled,” says Rockwell. “So we’re making the lighting a bit brighter.”

One thing won’t change: The delicious smell of Douglas fir that permeated the space as it was assembled. And yes, he expects that again.

“They are still cutting edges and there are a lot of modifications to the wood,” he says, “So it will still have that smell.” 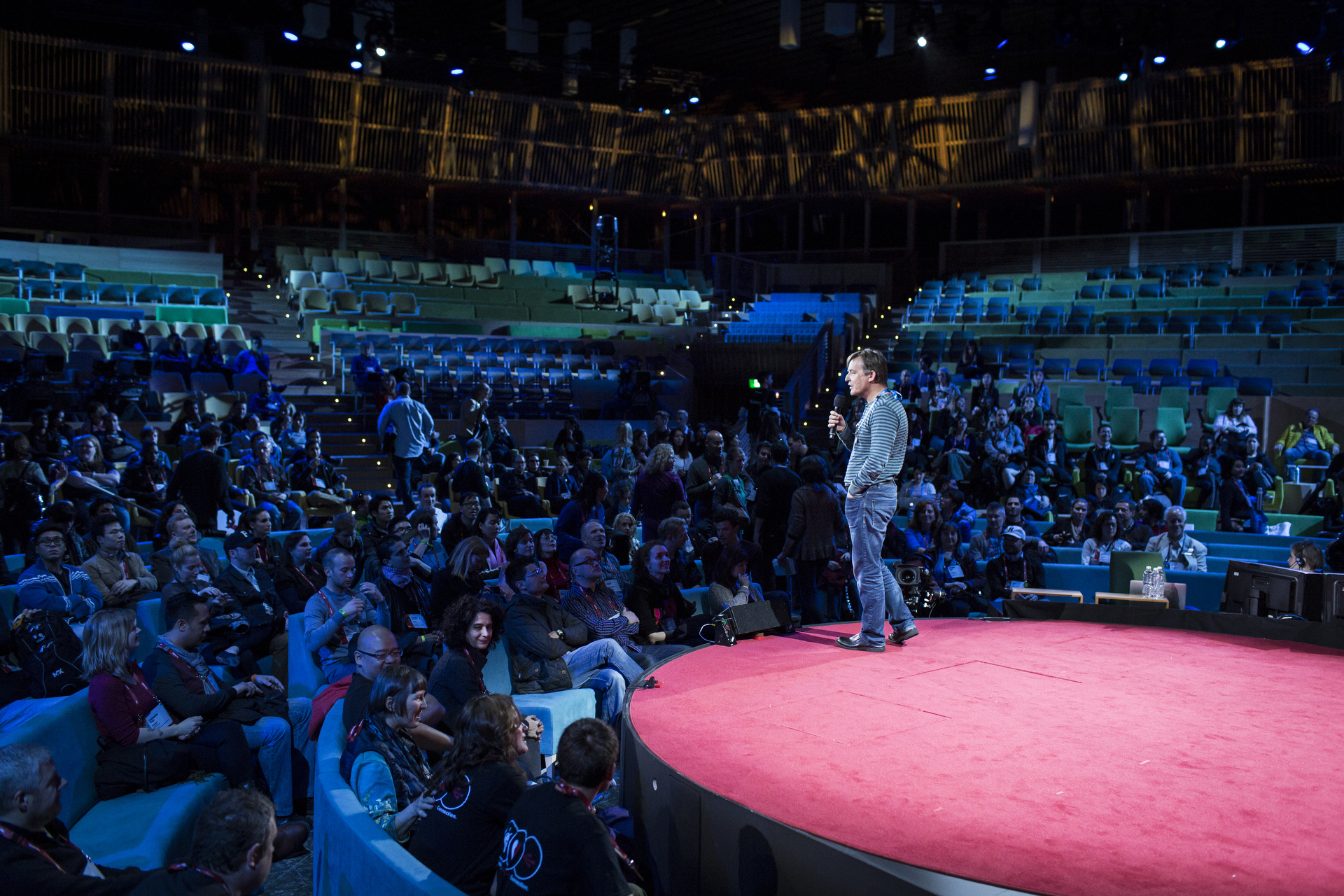 Chris Anderson addresses TEDx organizers from around the world in the TED2015 theater, making use of that 16 foot stage. Photo: James Duncan Davidson/TED