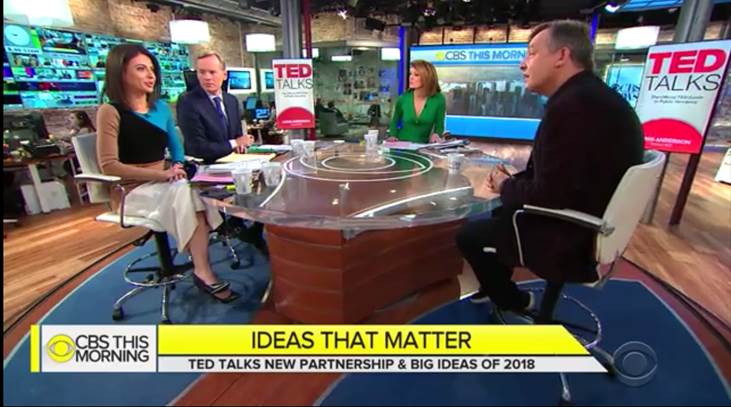 CBS This Morning anchors (from left) Bianna Golodryga, John Dickerson and Norah O’Donnell chat with the head of TED, Chris Anderson, to announce the new “Ideas That Matter” monthly series on CBS.

The American news show CBS This Morning and TED announced today that they will collaborate on an ongoing series called “Ideas That Matter.” The monthly series, which launches in January, will invite a TED speaker onto the broadcast to talk with the anchors. The series aims to highlight the individuals and ideas shaping our world and lives.

As Chris Anderson, curator and head of TED, said about the partnership: “Today’s all-consuming political headlines risk distracting us from the exciting and potentially world-changing ideas all around us. This segment will take the ideas we believe could change our world and give them a better shot at being heard, understood—and perhaps even acted on.”

The first guest in the series will be Jan Rader, the fire chief of Huntington, West Virginia,  who has been on the front lines of dealing with her town’s opioid epidemic. Her recent TED talk shared her unique solutions to dealing with this challenge. Rader will appear on CBS This Morning on January 2, and her TED Talk will be released the same day. Additional speakers will be announced.

The “Ideas That Matter” partnership was featured on CBS This Morning today by Chris Anderson, curator and head of TED. You can watch the announcement here or on Facebook.