In a searching session of talks hosted by curator and photographer Deborah Willis and her son, artist Hank Willis Thomas (who spoke together at TEDWomen 2017), 12 speakers explored conflict, love, the environment and activism, and more. The session featured duet talks from Paula Stone Williams and Jonathan Williams, Neha Madhira and Haley Stack, Aja Monet and phillip agnew, Beth Mortimer and Tarje Nissen-Meyer, and William Barber and Liz Theoharis, as well as solo talks from Jan Rader and Yvonne Van Amerongen. 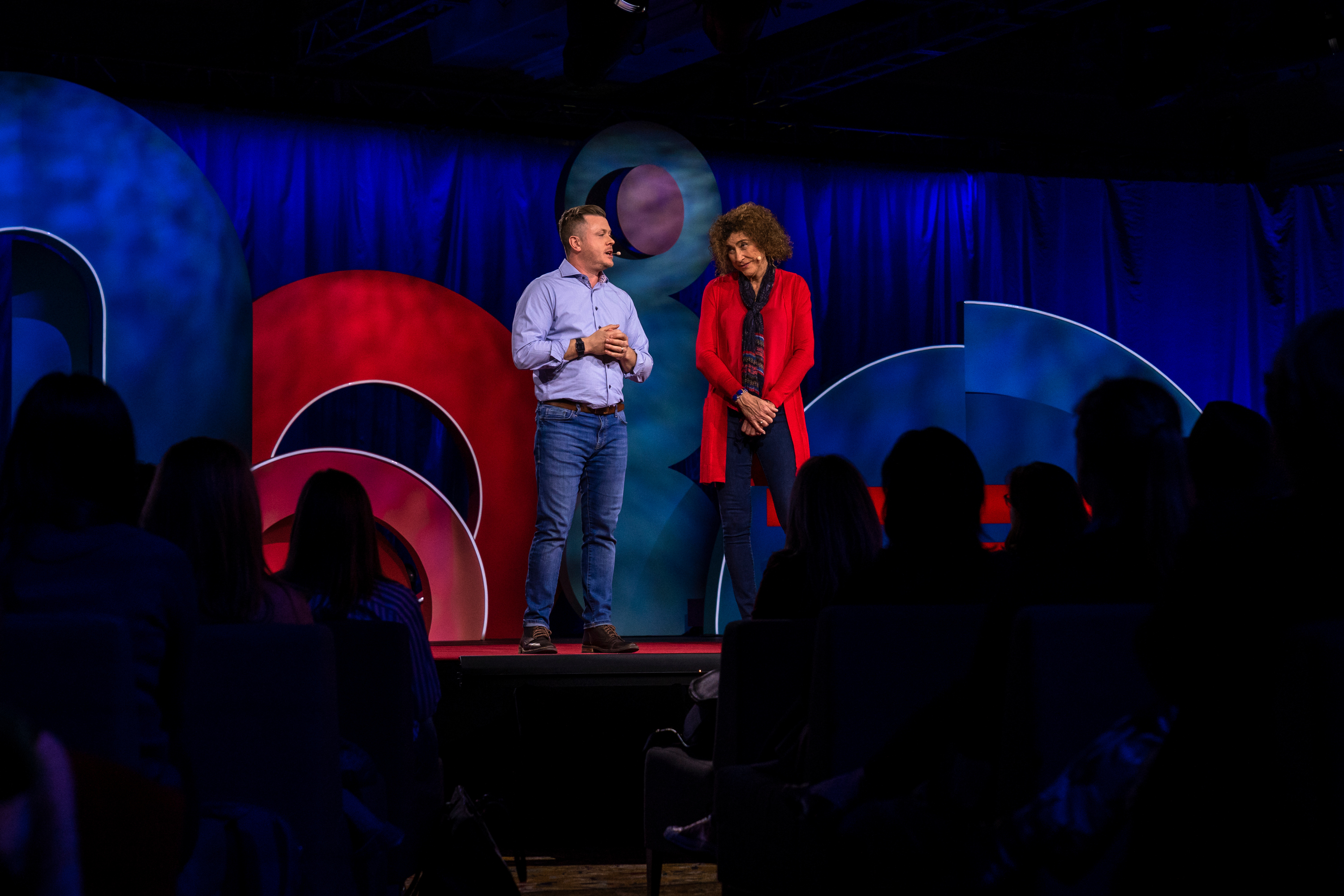 Paula Stone Williams and her son Jonathan Williams share their story of personal reckoning. “I could not ask my father to be anything other than her true self,” Jonathan says. They speak at TEDWomen 2018: Showing Up, November 29, 2018, Palm Springs, California. (Photo: Callie Giovanna / TED)

A story of redemption. Paula Stone Williams and her son Jonathan Williams know that the truth will set you free — but only after it upends your carefully constructed narrative. In a moving, deeply personal talk, they share the story of Paula’s transition from male to female. Her devotion to authenticity caused her to leave her comfort zone as a nationally known religious leader. In the process, Paula lost all of her jobs, most of her friends and was rejected by her church. “I always taught the kids that when the going gets tough, you have to take the road less traveled — the narrow path — but I had no idea how hard it would become,” she says. Jonathan faced a personal reckoning himself, questioning his childhood memories and asking himself: “Had my father even ever existed?” After a long process of reconciliation, Jonathan ultimately shifted his personal and professional outlook, turning his church into an advocate for the LGBTQ community. “I could not ask my father to be anything other than her true self,” he says. Nowadays, Jonathan’s kids lovingly refer to Paula with a new team of endearment: “GramPaula.”

How empathy can catalyze change in the opioid crisis. Compassion and education can save lives in the opioid epidemic, says Huntington, West Virginia, fire chief Jan Rader. As she saw rising levels of drug overdoses and deaths in her city, Rader realized that, unlike rescuing someone from a fire, helping someone suffering from substance abuse disorder requires interwoven, empathy-based solutions — and she realized that first responders have an important role to play in the overdose epidemic. So she developed programs like Quick Response Team, a 72-hour post-overdose response team of recovery coaches and paramedics, and ProAct, a specialty addiction clinic. Rader also established self-care initiatives for her team of first responders, like yoga classes and on-duty massages, to help alleviate PTSD and compassion fatigue. These programs have already had a remarkable impact — Rader reports that overdoses are down 40 percent and deaths are down 50 percent. Stigma remains one of the biggest barriers in tackling the opioid crises, but when a community comes together, change can happen. “In Huntington, we are showing the rest of the country … that there is hope in this epidemic,” Rader says.

When is a free press not really free? The freedom to publish critical journalism is more important than ever. Neha Madhira and Haley Stack remind us that this should apply “to everyone, no matter where you live or how old you are.” Madhira and Stack — who work at the Eagle Nation Online, a high school newspaper in Texas — learned the hard way that student journalists “don’t have the same First Amendment rights” everyone else had. In 2017, their principal pulled three stories, on topics like a book that was removed from a class reading list, and the school’s response to National Walkout Day. He instituted “prior review” and “prior restraint” policies on all stories, banned editorials, and fired the paper’s advisor. They had no choice but to fight. Madhira says, “How were we supposed to write our paper… if we couldn’t keep writing the relevant stories that were impacting our student body?” They received an outpouring of support from around the country, which eventually persuaded the principal to overturn his policy. But this all could happen again — which is why they now lobby for New Voices, a law which would extend First Amendment protections to student journalism, and which has now passed in 14 states. Madhira and Stack hope it will pass nationwide. 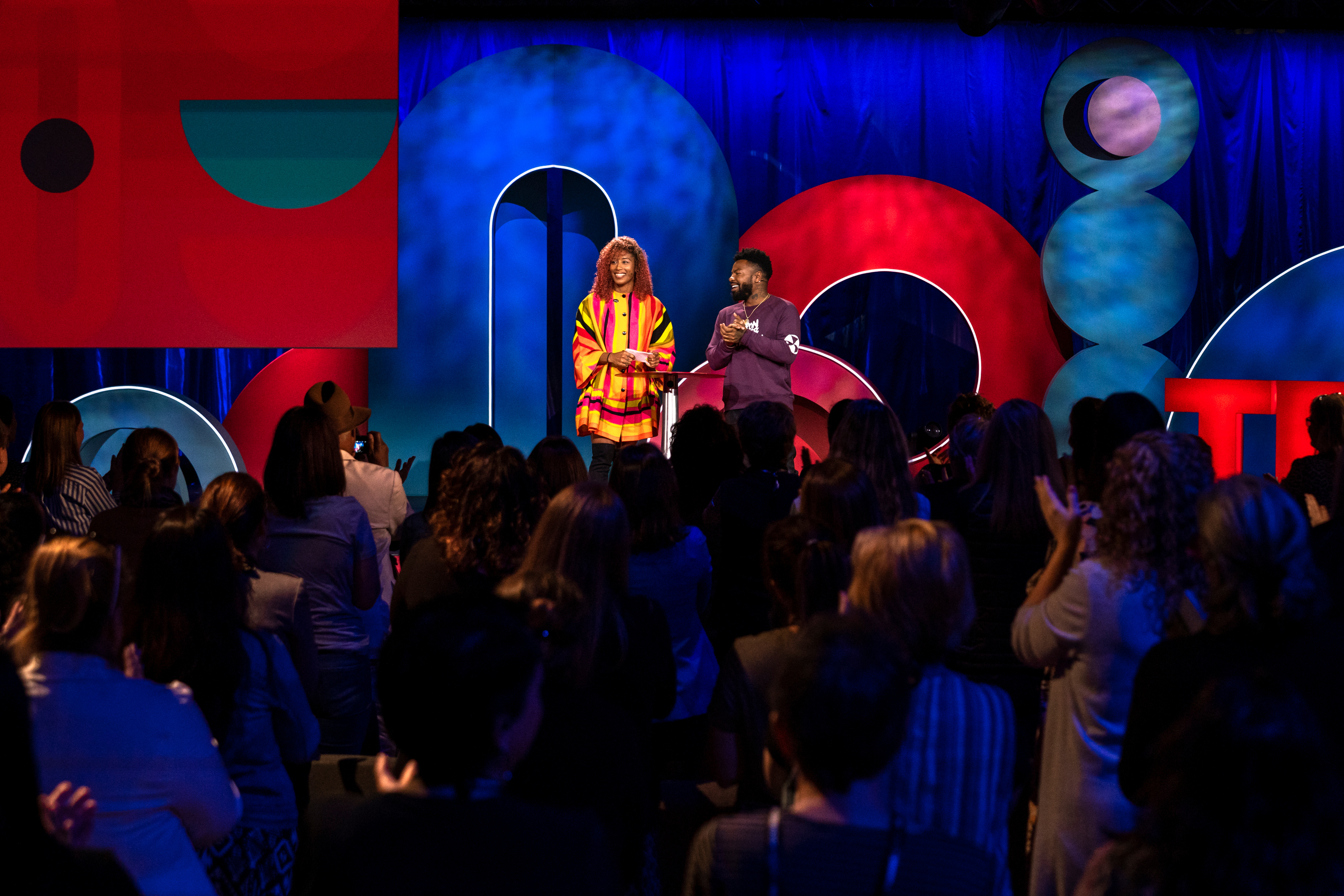 Aja Monet and phillip agnew blend art and community organizing into a way to change their community. They speak at TEDWomen 2018: Showing Up, on November 29, 2018, in Palm Springs, California. (Photo: Callie Giovanna / TED)

Art as organizing. Activists and artists Aja Monet and phillip agnew connected the way many young couples meet today — on Instagram. What started on social media quickly turned into a powerful partnership they call “Love Riott.” Together, they founded Smoke Signals Studio, a space for community-based art and music in Little Haiti, Miami. As they describe it, Smoke Signals is a place “to be loved, to be heard and to be held.” It’s a place where art and organizing become the answer to anger and anxiety. Both Monet and agnew have dedicated their lives to merging arts and culture with community organizing — Monet with the Community Justice Project and agnew with the Dream Defenders. “Great art is not a monologue. Great art is a dialogue between the artist and the people,” Monet says. 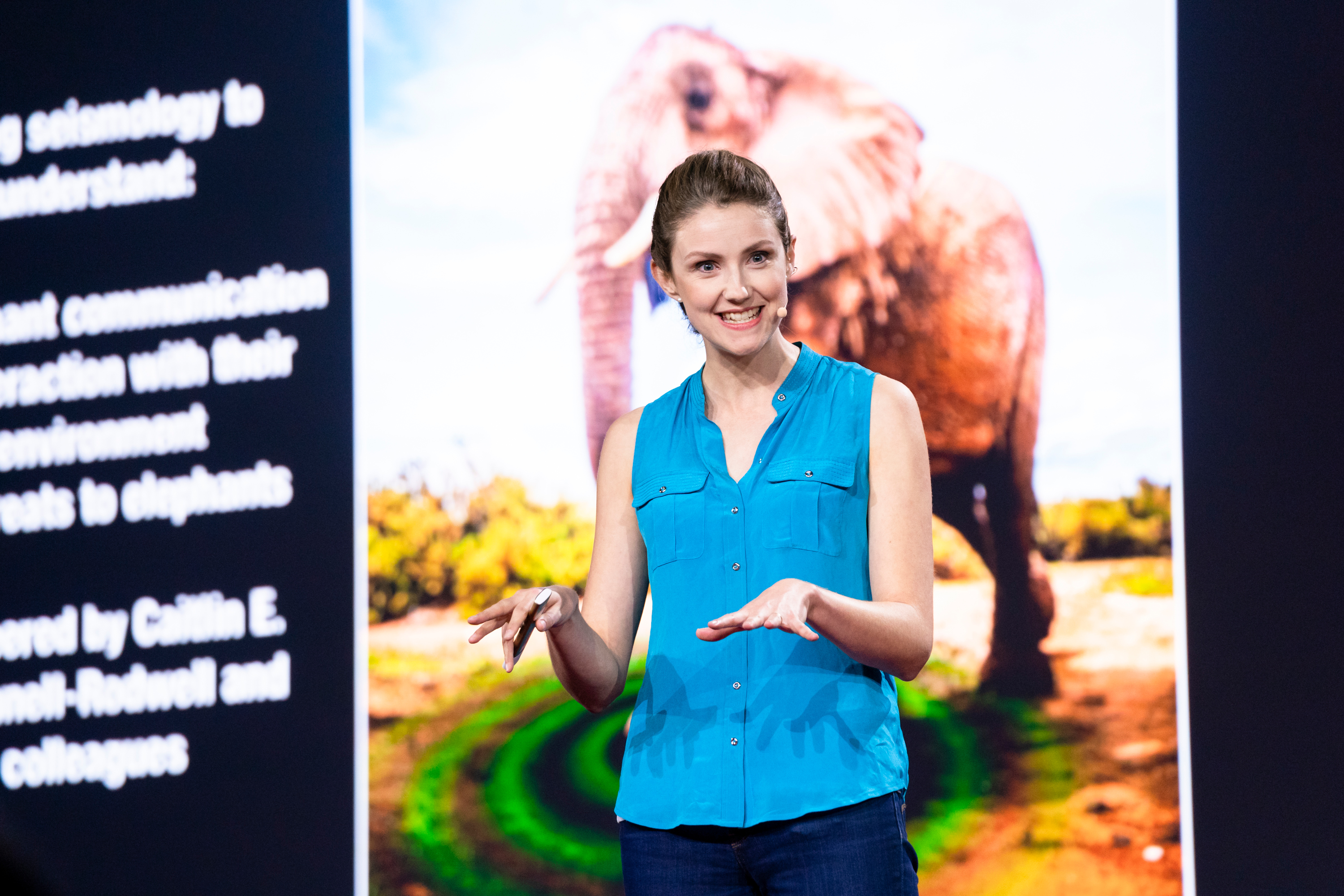 The enigmatic language of elephants. To study the language of elephants, one needs a seismometer — a device that measures earthquakes — which is how biologist Beth Mortimer and geophysicist Tarje Nissen-Meyer came to work together. Elephants communicate simultaneously through the land and air over long distances using infrasonic vocalizations, meaning that they make sounds deeper than the human ear can detect. “These vocalizations are as loud as 117 decibels, which is about the same volume as a Coachella rock concert,” says Nissen-Meyer. By using seismology to study wildlife, the pair is developing a noninvasive, real-time and low-cost study method that is practical in developing countries to help them fight poaching. Eventually, they’d like to go beyond elephants, and they have plans to continue eavesdropping on the silent discos of the animal kingdom, keeping an ear to the ground to help protect the world’s most vulnerable societies, precious landscapes and iconic animals.

Living a good life with dementia. How would you prefer to spend the last years of your life: in a sterile, hospital-like institution or in a comfortable home that has a supermarket, pub, theater and park within easy walking distance? The answer seems obvious now, but when the Hogeweyk dementia care center was founded by Yvonne Van Amerongen 25 years ago, it was seen as a risky break from traditional dementia care. Located near Amsterdam, Hogeweyk is a gated community consisting of 27 homes with more than 150 residents who have dementia, all overseen 24/7 by well-trained professional and volunteer staff. (The current physical village opened in 2009.) People live in groups according to shared lifestyles. One home, where Van Amerongen’s mother now lives, contains travel, music and art enthusiasts. Surprisingly, it runs on the same public funds given to other nursing homes in the Netherlands — success, Van Amerongen says, comes from making careful spending decisions. As she puts it, “Red curtains are as expensive as gray ones.” The village has attracted international visitors eager to study the model, and direct offshoots are under construction in Canada and Australia. Whether people have dementia or not, Van Amerongen says, “Everyone wants fun in life and meaning in life.” 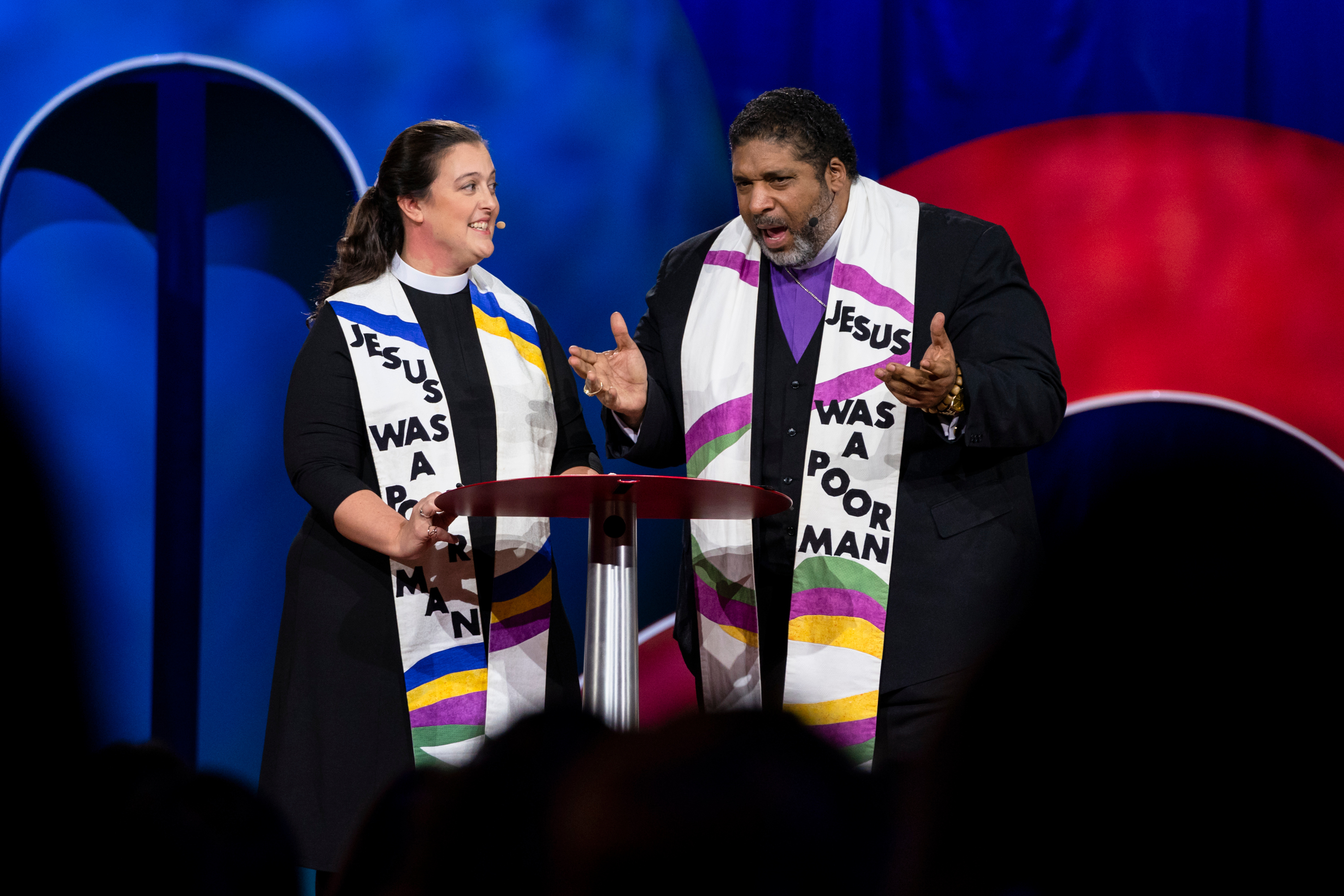 “This is a moral uprising … a new and unsettling force of people who are repairing the breach, who refuse to give up, and refuse to settle and surrender to suffering,” says Reverend William Barber, right. Together with Reverend Liz Theoharis, at left, he speaks at TEDWomen 2018: Showing Up, November 29, 2018, Palm Springs, California. (Photo: Callie Giovanna / TED)

America’s fusion is our story. Reverends William Barber and Liz Theoharis have traveled from the Bronx to the border, from the deep South to the California coast, meeting mothers whose children died because of a lack of healthcare, homeless families whose encampments have been attacked by police and communities where there’s raw sewage in people’s yards. Closing session 4 of TEDWomen 2018, the two make a powerful call to end poverty. “America is beset by deepening poverty, ecological devastation, systemic racism and an economy harnessed to seemingly endless war,” Barber says. In a nation that boasts of being the wealthiest country in world, 51 percent of children live in food-insecure homes, and 250,000 people die every year of poverty and low wealth. “If we have a different moral imagination, if we have policy shifts guided by moral fusion, we can choose a better way,” Theoharis says. This past spring, Barber and Theoharis helped organize the largest, most expansive simultaneous wave of nonviolent civil disobedience in the 21st century and perhaps in history, re-inaugurating the Poor People’s Campaign started by Dr. Martin Luther King, Jr. The campaign is changing the narrative around poor people, refuting the idea that it’s not possible for everyone to survive and thrive. Barber and Theoharis are organizing hearings, holding community BBQs, going door to door registering people for a movement, holding freedom schools and developing public policies that will improve people’s lives. “This is a moral uprising … a new and unsettling force of people who are repairing the breach, who refuse to give up, and refuse to settle and surrender to suffering,” Barber says.