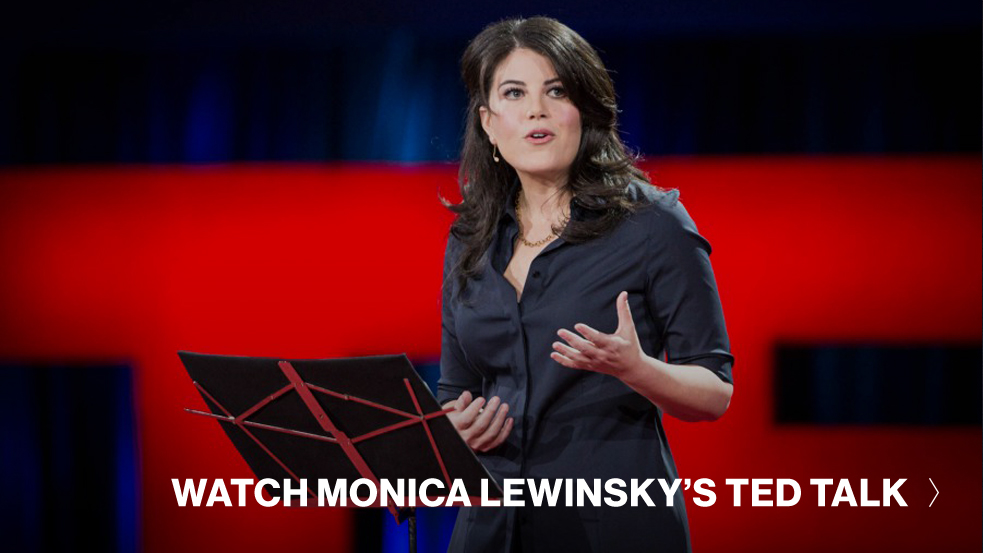 Monica Lewinsky is one of very few people over the age of 40 who has no interest in being 22 again.

“At the age of 22, I fell in love with my boss,” she says bluntly as she begins her talk on the TED2015 stage, her hands clasped in front of her. “At the age of 24, I learned the devastating consequences. “

Lewinsky asks for a show of hands: “Who didn’t make a mistake at 22?”

“Not a day goes by that I am not reminded of my mistake, and I regret that mistake deeply,” she continues. “In 1998, after having been swept up in an improbable romance, I was then swept up into the eye of a political, legal and media maelstrom like we had never seen before.”

The media landscape of the mid 1990s was, of course, very different from what it is today. Lewinsky points out that news at the time was consumed from three sources: reading a newspaper or magazine, listening to the radio, or watching television. But her affair with a sitting president?

“This scandal was brought to you by the digital revolution,” she says. “It was the first time traditional news was usurped by the Internet, a click that reverberated around the whole world.”

Lewinsky said that she had very little understanding of what was happening at the time. “Overnight, I went from being a completely private figure to a publicly humiliated one worldwide,” she says.

“I was Patient Zero of losing a personal reputation on a global scale almost instantaneously.”

If you close your eyes and go back to that moment, you can probably remember the tiny number of images that fueled this scandal: a headshot of Lewinsky with her swooping hair; a slow-motion video of Lewinsky in black beret, reaching out of the crowd to hug President Clinton; a freeze frame of her with her right hand raised being sworn in for her deposition in Clinton’s impeachment trial.

What was different about this scandal was the focus on her.

“Now I admit I made mistakes — especially wearing that beret — but the attention and judgment that I received — not the story, but that I personally received — was unprecedented,” she says. “I was branded as a tramp, tart, slut, whore, bimbo and, of course, ‘that woman.’ I was known by many, but actually known by few. I get it. It was easy to forget ‘that woman’ was dimensional and had a soul.”

While Lewinsky doesn’t say it, it should also be noted that ‘that woman’ has a voice — one that is calm and clear. Lewinsky was hardly heard from at the time of the scandal, aside from a Barbara Walters 20/20 interview in 1999 that launched the sale of a thousand Club Monaco lipsticks. Few in the audience would have been able to identify her voice before she stepped on the stage today. And while she wrote an essay for Vanity Fair last year, this is only the second time she’s spoken in public since disappearing from the public eye in 2005 and moving to London to study social psychology at the London School of Economics. She also spoke at Forbes’ 30 Under 30 Summit in October.

“In 1998, I lost my reputation and my dignity. … I lost my sense of self,” Lewinsky continues. “When this happened to me, 17 years ago, there was no name for it. Now we call it cyber-bullying.”

Lewinsky describes in detail one of the hardest parts of the scandal from her perspective: when, after the Starr Report was released to Congress, transcripts of her private conversations, secretly recorded by Linda Tripp, went public. Soon afterward, clips aired on television and were posted online. Lewinsky calls the content of those tapes “the worst version of myself” and says that they made her feel “deeply, deeply ashamed.” She says that she could not believe the things she’d said, or that others were forming an impression of her based on it.

“This was not something that happened with regularity back then in 1998,” she says. “And by ‘this,’ I mean the stealing of people’s private words, actions conversations or photos and then making them public. Public without consent, public without context and public without compassion.”

Of course, it happens with extreme regularity now. Take for example, in the past year: the leak of nude photos of Jennifer Lawrence and other celebrities; the Sony hack, in which the most embarrassing personal emails traveled far and wide; the release of 100,000 Snapchat images and videos on the website SnapChatLeaked.com.

But in 2010, a case of stolen actions hit Lewinsky in the gut. Tyler Clementi was a freshman at Rutgers University whose roommate set up a webcam and captured video of him being romantic with another man. Online harassment kicked in. Days later, Clementi jumped from the George Washington Bridge.

“Tyler’s tragic, senseless death was a turning point for me,” says Lewinsky. “It served to recontextualize my experiences. I began to look at the world of humiliation and bullying around me and see something different … Every day online, people — especially young people who are not developmentally equipped to handle this — are so abused and humiliated that they can’t imagine living to the next day.”

Humiliation has a personal price, notes Lewinsky, but it has a cultural one as well, she says.

“For nearly two decades now, we have slowly been sowing the seeds of shame and public humiliation in our cultural soil,” she says. “Gossip websites, paparazzi, reality programming, politics, news outlets and sometimes hackers traffic in shame.”

She brings up Nicolaus Mills’ concept of a “culture of humiliation.”

So how do we move forward?

“With every click we make a choice,” says Lewinsky. She wants to see a “cultural revolution.”

“Public humiliation as a blood sport has to stop,” she says. “We need to return to a long-held value of compassion and empathy.”

Lewinsky asks that every person become an “upstander” instead of a bystander when it comes to public humiliation. “I’ve seen some very dark days in my life. It was empathy and compassion from friends, family, coworkers, even strangers that saved me. Empathy from one person can make a difference,” she says. “Compassionate comments help abate the negativity.”

“The Internet is the superhighway for the id,” she says, “but online showing empathy to others benefits us all … Just imagine walking a mile in someone else’s headline.”

Lewinsky says that there is one question she has gotten constantly about her re-emergence over the past year: why now? She stresses that her decision to step back out into the spotlight on her own terms is not politically motivated.

“The top-note answer was and is: Because it’s time. Time to stop tiptoeing around my past … Time to take back my narrative,” she says. “Anyone who is suffering from shame and public humiliation needs to know one thing: you can survive it. I know it’s hard. It may not be painless, quick or easy, but you can insist on a different ending to your story.”