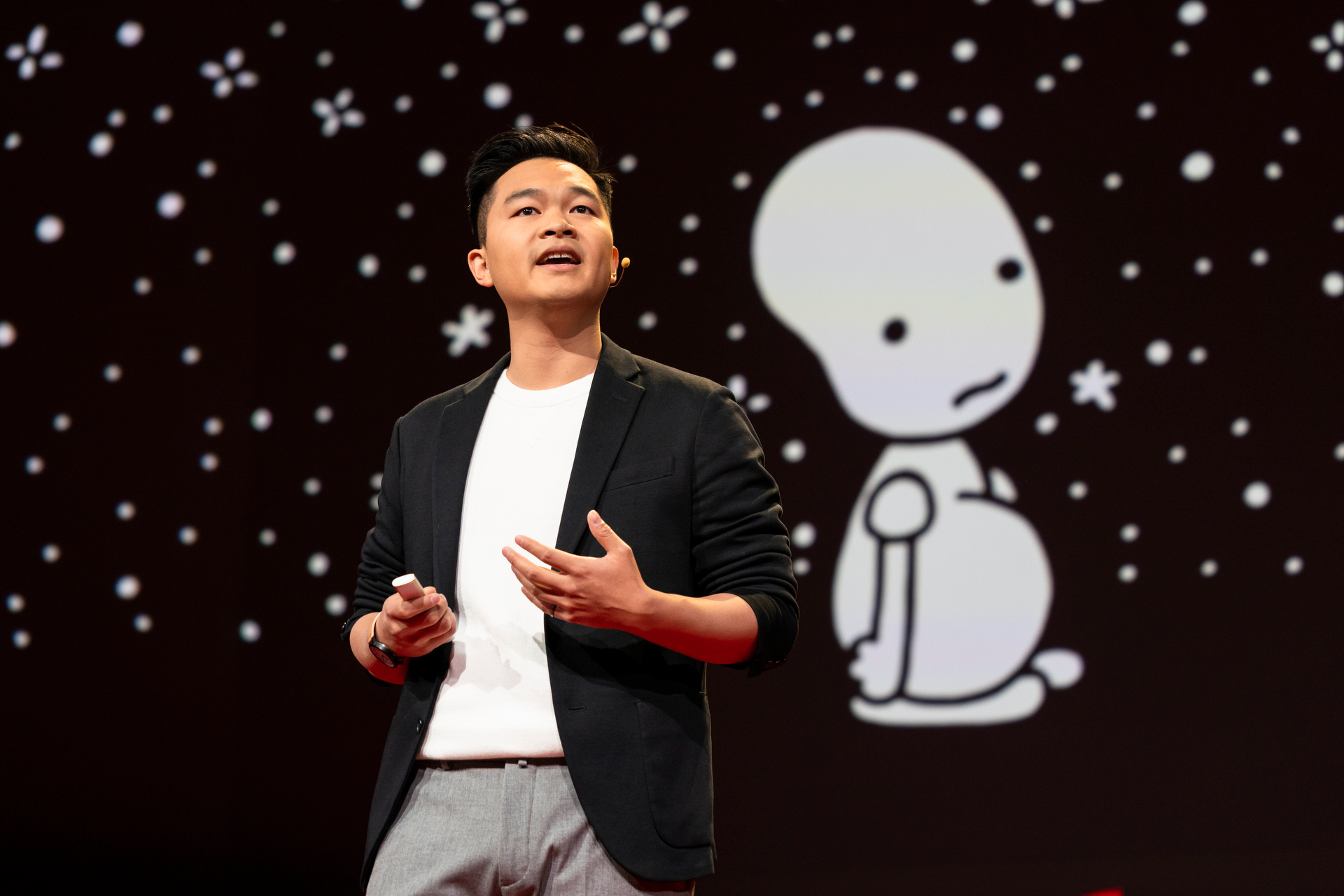 In a powerful personal talk, illustrator, author and screenwriter Jonny Sun shares how social media can be an antidote to loneliness. He speaks at TED2019: Bigger Than Us, on April 17, 2019 in Vancouver, BC, Canada. (Photo: Bret Hartman / TED)

Day 3 of TED2019 featured three sessions of talks, a live podcast taping — and some world-changing ideas.

You could give the next best TED Talk. If you have an idea the world needs to hear, put your name forward to speak at next year’s TED conference! We’ve just opened applications in our TED2020 Idea Search, a worldwide hunt for the next great idea.

Can Twitter be saved? Jack Dorsey’s interview with TED’s Chris Anderson and Whitney Pennington Rodgers is live on TED.com. Hear from Jack about what worries him most about the messaging platform, which has taken a serious chunk of the blame for the divisiveness seen around the world, both online and off.

Inside the black hole image that made history. Also just published on TED.com: astrophysicist Sheperd Doeleman, head of the Event Horizon Telescope collaboration, speaks on the iconic, first-ever image of a black hole — and the epic, worldwide effort involved in capturing it.

Some larger themes that emerged from the day:

The spread of misinformation online is the great challenge of our time. We, the everyday users of the internet, might have to do what major tech companies and governments can’t: fight the misinformation we see every day in our feeds. Claire Wardle suggests we band together to accelerate a solution: for example, by “donating” our social data (instead of unwittingly handing it over to the tech giants), we could help researchers understand the scope of the problem. Could we build a new infrastructure for quality information, following the model of Wikipedia? In a special recording of The TED Interview, venture capitalist turned activist Roger McNamee picked up on the threat of misinformation, tracing the contours of Silicon Valley’s role in the 2016 US presidential election, Brexit and much more. After their conversation, Chris and Roger held a robust discussion with the audience, taking questions from Carole Cadwalladr, Cambridge Analytica whistleblower Christopher Wylie and Sun Microsystems founder Bill Joy, among others.

But social media can also be a force for good. In a powerful personal talk, illustrator, author and screenwriter Jonny Sun shares how social media is his antidote to loneliness. By sending jokes and endearing, misspelled, illustrated observations on the human condition “out to the void” of social media, he’s found that the void is often willing to talk back — reminding us of our shared human-ness, even if only for a moment.

The new pursuit of happiness. Researcher Rick Doblin studies the use of psychedelics as medicine, including treatments that show promise against PTSD and depression. Used medically, he says, psychedelic drugs can heighten a patient’s emotional awareness and sense of unity — even create a spiritual connection. Psychologist Elizabeth Dunn studies how we can create more happiness by being more altruistic. The secret? You have to see the effects of your giving, and feel a true connection to the people you’re helping.

Exploring the unexplored. Science has a “geography problem,” says paleoanthropologist (and stand-up comedian) Ella Al-Shamahi. We’re not doing frontline scientific exploration in a massive chunk of the world, which governments have deemed too unstable — places that have played a big role in the human journey, like Africa and the Middle East. She takes us to Socotra, an island off Yemen known as the Galápagos of the Indian Ocean, where she joined the area’s first frontline exploration since 1999. Ninety percent of the reptiles and 30 percent of the plants there exist only, well, there. Al-Shamahi is hoping to return to Socotra and, with the help of local collaborators, continue to explore this alien land. A little further offshore, undersea explorer Victor Vescovo joins us fresh from an expedition to the bottom of the Indian Ocean — the fifth ocean bottom he’s seen. In conversation with TED science curator David Biello, Vescovo shares the technology powering his new submersible, designed to explore the deepest parts of the world’s oceans. He describes his project as “kind of the SpaceX of ocean exploration, but I pilot my own vehicles.”

Architecture doesn’t need to be permanent. When it comes to cities, we’re obsessed with permanence and predictability. But by studying impermanent settlements, we can learn to build cities that are more adaptable, efficient and sustainable, says architect Rahul Mehrotra. He takes us to the confluence of India’s Yamuna and Ganges rivers — where, every 12 years, a megacity springs up to house the seven million pilgrims who live there for the 55-day duration of the Kumbh Mela religious festival. The city is fully functional yet impermanent and reversible — built in ten weeks and completely disassembled after the festival. Studying the Kumbh Mela helped Mehrotra realize that our preoccupation with permanence is shortsighted. “We need to make a shift in our imagination about cities,” he says. “We need to change urban design cultures to think of the temporal, the reversible, the disassemblable.” And architect Bjarke Ingels takes us on a worldwide tour of his work — from much-needed flood-protection improvements around lower Manhattan (scheduled to break ground this year) to a toxin-free power plant in Copenhagen (with a rooftop you can ski on!) to a proposed floating ocean city (powered completely by solar energy — which could serve as a model for living on Mars.) We need to imagine vibrantly flexible habitats, he says — and, in doing so, we can forge a sustainable future for all.