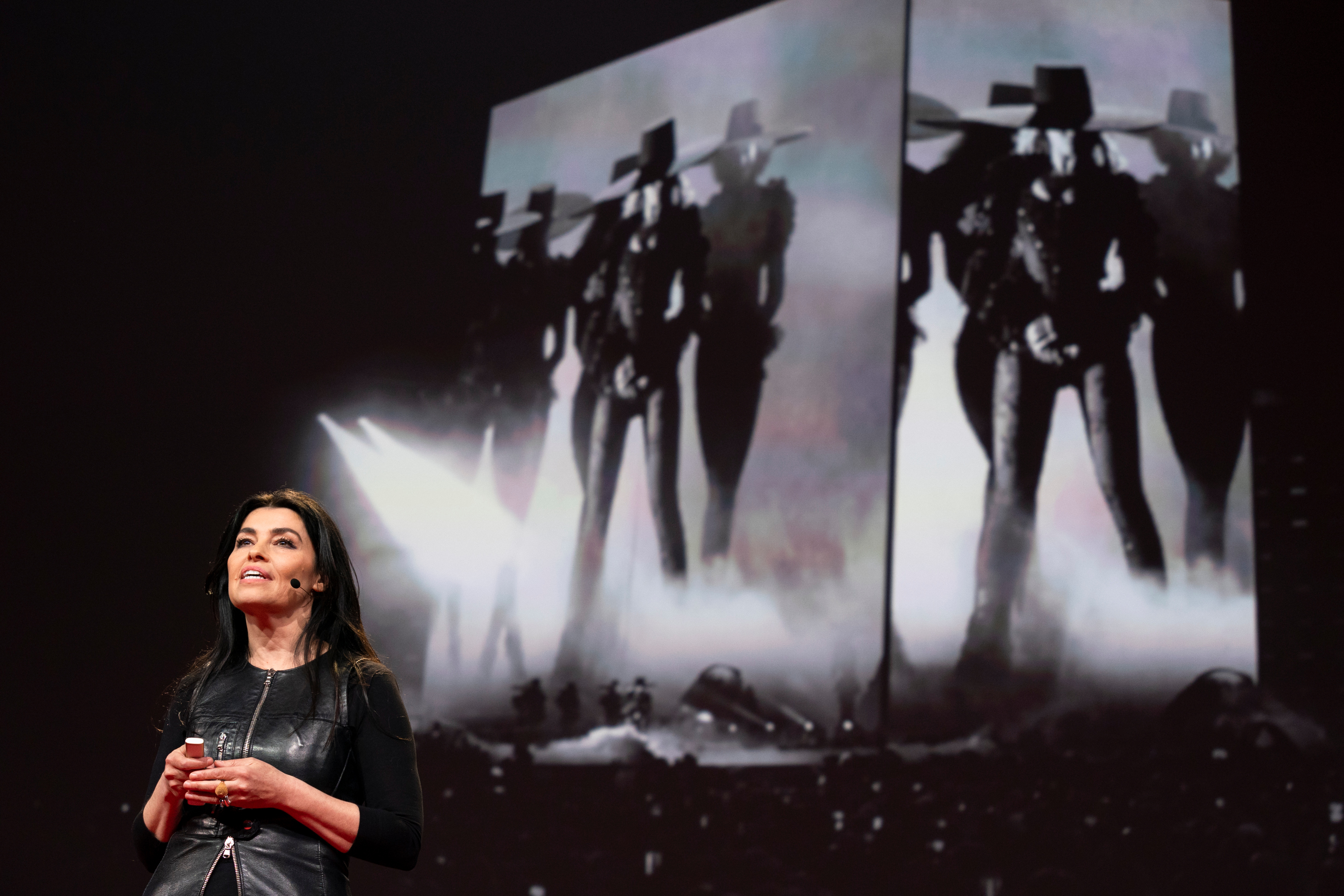 Legendary artist and stage designer Es Devlin takes us on a tour of the mind-blowing sets she’s created for Beyoncé, Adele, U2 and others. She speaks at TED2019: Bigger Than Us, on April 18, 2019 in Vancouver, BC, Canada. (Photo: Bret Hartman / TED)

Day 4 of TED2019 played on some of the more powerful forces in the world: mystery, play, connection, wonder and awe. Some themes and takeaways from a jam-packed day:

Sleep is the Swiss Army knife of health. The less you sleep, the shorter your life expectancy and the higher your chance of getting a life-threatening illness like Alzheimer’s or cancer, says sleep scientist Matt Walker. It’s all about the deep sleep brain waves, Walker says: those tiny pulses of electrical activity that transfer memories from the brain’s short-term, vulnerable area into long-term storage. He shares some crazy stats about a global experiment performed on 1.6 billion people across 70 countries twice a year, known to us all as daylight savings time. In the spring, when we lose an hour of sleep, we see a 24 percent increase in heart attacks that following day, Walker says. In the autumn, when we gain an hour of sleep, we see a 21 percent reduction in heart attacks.

Video games are the most important technological change happening in the world right now. Just look at the scale: a full third of the world’s population (2.6 billion people) find the time to game, plugging into massive networks of interaction, says entrepreneur Herman Narula. These networks let people exercise a social muscle they might not otherwise exercise. While social media can amplify our differences, could games create a space for us to empathize? That’s what is happening on Twitch, says cofounder Emmett Shear. With 15 million daily active users, Twitch lets viewers watch and comment on livestreamed games, turning them into multiplayer entertainment. Video games are a modern version of communal storytelling, says Shear, with audiences both participating and viewing as they sit around their “virtual campfires.”

We’re heading for a nutrition crisis. Plants love to eat CO2, and we’re giving them a lot more of it lately. But as Kristie Ebi shows, there’s a hidden, terrifying consequence — the nutritional quality of plants is decreasing, reducing levels of protein, vitamins and nutrients that humans need. Bottom line: the rice, wheat and potatoes our grandparents ate might have contained more nutrition than our kids’ food will. Asmeret Asefaw Berhe studies the soil where our food grows — “it’s just a thin veil that covers the surface of land, but it has the power to shape our planet’s destiny,” she says. In a Q&A with Ebi, Berhe connects the dots between soil and nutrition: “There are 13 nutrients that plants get only from soil. They’re created from soil weathering, and that’s a very slow process.” CO2 is easier for plants to consume — it’s basically plant junk food.

Tech that folds and moves. Controlling the slides in his talk with the swipe on the arm of his jean jacket, inventor Ivan Poupyrev shows how, with a bit of collaboration, we can design literally anything to be plugged into the internet — blending digital interactivity with everyday analog objects like clothing. “We are walking around with supercomputers in our pockets. But we’re stuck in the screens with our faces? That’s not the future I imagine.” Some news: Poupryev announced from stage that his wearables platform will soon be made available freely to other creators, to make of it what they will. Meanwhile Jamie Paik shows folding origami robots — call them “robogami” — that morph and change to respond to what we’re asking them to do. “These robots will no longer look like the characters from the movies,” she says. “Instead, they will be whatever you want them to be.”

Inside the minds of creators. Actor Joseph Gordon-Levitt has gotten more than his fair share of attention in his acting career (in which, oddly, he’s played two TED speakers: tightrope walker Philippe Petit and whistleblower Edward Snowden). But as life has morphed on social media, he’s found that there’s a more powerful force than getting attention: giving it. Paying attention is the real essence of creativity, he says — and we should do more of it. Legendary artist and stage designer Es Devlin picks up on that theme of connection, taking us on a tour of the mind-blowing sets she’s created for Beyoncé, Adele, U2 and others; her work is aimed at fostering lasting connections and deep empathy in her audience. As she quotes E.M. Forster: “Only connect!”

We can map the universe — the whole universe. On our current trajectory, we’ll map every large galaxy in the observable universe by 2060, says astrophysicist Juna Kollmeier, head of the Sloan Digital Sky Survey (SDSS). “Think about it. We’ve gone from arranging clamshells to general relativity to SDSS in a few thousand years,” she says, tracing humanity’s rise in a sentence. “If we hang on 40 more, we can map all the galaxies.” It’s a truly epic proposition — and it’s also our destiny as a species whose calling card is to figure things out.