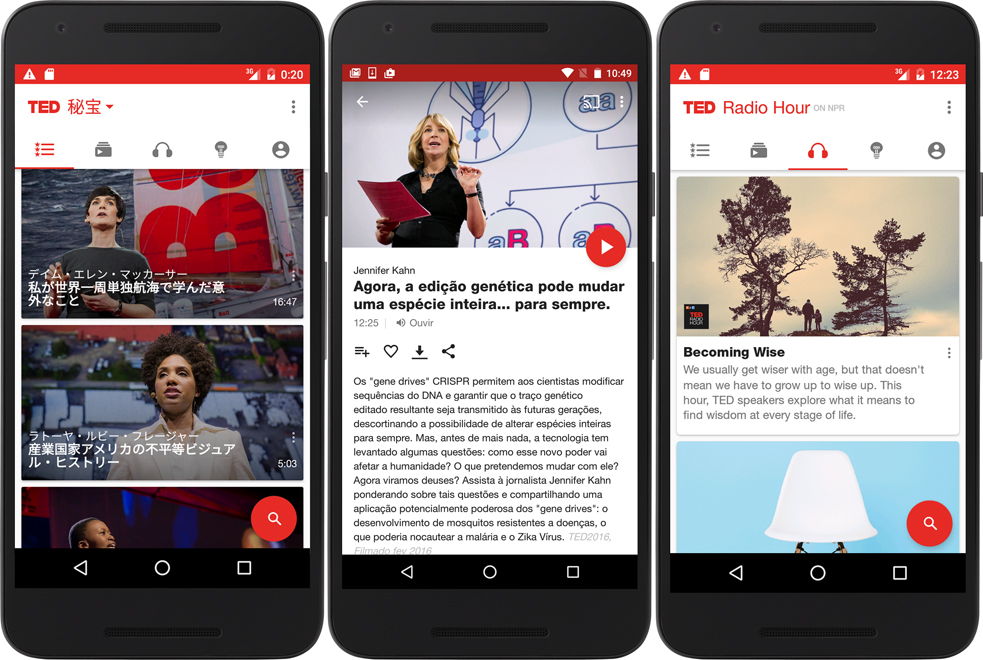 TED’s rebuilt-from-the-ground-up Android app offers, from left: Browsing and search in 24 languages (here’s Japanese); regional highlights, like this talk on Zika, curated and translated for our Brazilian audience; and a library of TED Radio Hour audio podcasts to download or stream.

A TED Talk might contain a brilliant idea, but if it’s only available in English, well, it can only go so far. That’s why the TED Translator program encourages thousands of volunteer translators worldwide to subtitle TED Talks in more than 100 languages. So far, they’ve created 90,000 subtitled talks!

Now we’ve completely rebuilt the TED Talks Android app to help our global audience search, find and watch talks in their local languages. The rebuilt-from-the-ground-up Android app works natively in 24 languages, so if your phone setting is in native Japanese, you’ll now get the full TED experience with a Japanese interface and more than 2,000 TED Talks subtitled in Japanese — and even multi-language search.

New translations are happening all the time, and as new TED Talks are subtitled into each of the 24 featured languages, the Android app will feature those new translations on the front page, so local TED fans can see them first.

And it’s not just language translations on the app that make the talks more relevant – we’re curating playlists and homepage features based on regional trending topics and news of the moment. European app users might see talks about the ongoing refugee crisis, while viewers in South America might see something relevant about Zika. We know that the more relevant a talk – both in terms of cultural context and native language – the more likely it is to resonate.

Oh, and it has some other awesome new features too: The app now features TED Radio Hour, a co-production with NPR. Listen to every new episode, and catch up on all four seasons of our popular audio podcast.

And the whole app has been given a fresh redesign, featuring the classic TED Red.

And of course, beyond those 24 languages, every TED Talk translation, all 90,000 of them in all 112 languages, can be found with the click of a button in the Android app.

When it comes to sharing talks with global audiences, we’re really just getting started. Watch for native language support in the next version of TED’s iOS app — and in fact, the TED viewer for Apple TV already supports translations. And stay tuned for more …

Want to contribute a translation in your own language? Learn more about our volunteer TED Translators program.