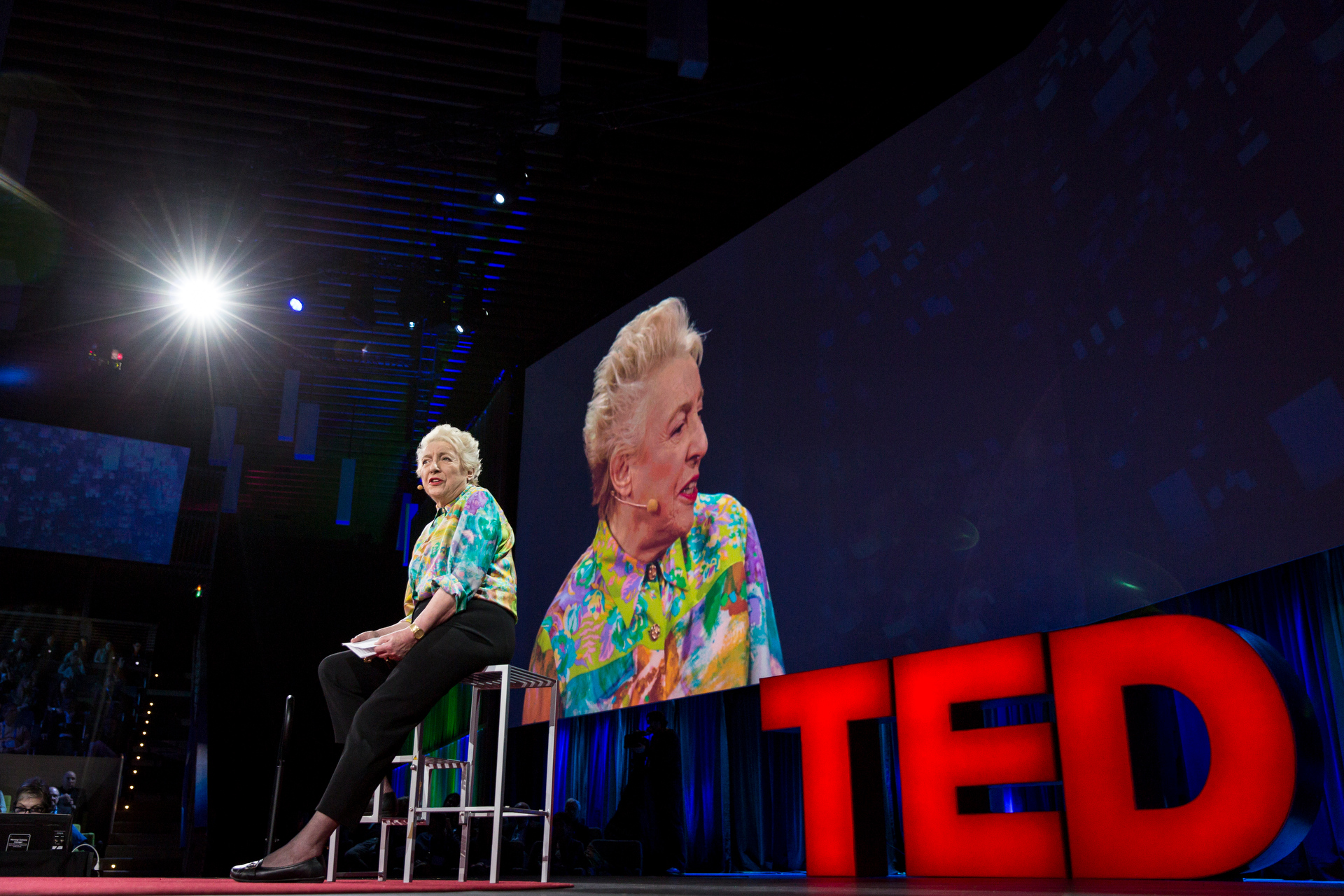 Life stories. Session 5 of TED2015 was dedicated to the kind of personal tales that would make for a great biopic. From the story of two Texans that calls into question what it means to be “American” to a talk from a tech pioneer who founded a software company for women in the 1960s, enjoy our recaps of these stories …

Anand Giridharadas paints a portrait of two Americas through the true-life parable of Raisuddin Bhuiyan, a Bangladeshi immigrant working in a Dallas mini-mart, and Mark Stroman, the white supremacist who shot him in a self-appointed act of revenge for the attacks of 9/11. Giridharadas tells a remarkable story of forgiveness: Years later, after his recovery, Bhuiyan, who had become a six-figure employee at a blue-chip tech company, sought to intervene in the cycle of vengeance between the Muslim and Western world by throwing his energy into saving Stroman from death row. Giridharadas’ story is also one about two Americas: a generous republic that remade a homeless immigrant with $60,000 in medical debt, and the other, stingier republic that trapped Stroman, born with all the privileges of American citizenship, but born into a cycle of childhood family dysfunction, domestic violence and drugs. According to Giridharadas, these two Americas, one “generous with second chances for the children of other lands” and the other, more and more “miserly with first chances to children of its own,” are simultaneously the most and least successful countries in the industrialized world. At the heart of this dichotomy is the disappearance of the middle class. “The moral challenge of my generation,” he says, “is to reacquaint these two Americas.” Read a full recap of this talk.

Nearly eighty years ago, Dame Stephanie “Steve” Shirley was shipped off on a train from Austria to England as part of the Kindertransport program to save Jewish children from Nazi Europe. She says, “I decided my life would be a life that was worth saving – and then I just got on with it.” It’s this straight-shooting tenacity that Dame Steve brought to the rest of her career. She began a software company as one of the earliest start-up founders in the UK and became an early pioneer of women’s rights in the workplace, recruiting women who had left work to get married or have children. That’s in spite of the fact that at the time, as a woman she “couldn’t work on the stock exchange, drive a bus, fly an airplane, or open a bank account without [her] husband’s permission.” She faced so many challenges with regard to her gender that she started going by “Steve” instead of “Stephanie.” When her own son was diagnosed with autism, the fearless Dame Steve started an autism research foundation. The secret to her success, she says, is “a 24/7 commitment that borders on the obsessive.” “Work,” says Dame Steve, “is not just something I do when I’d rather be doing something else.” 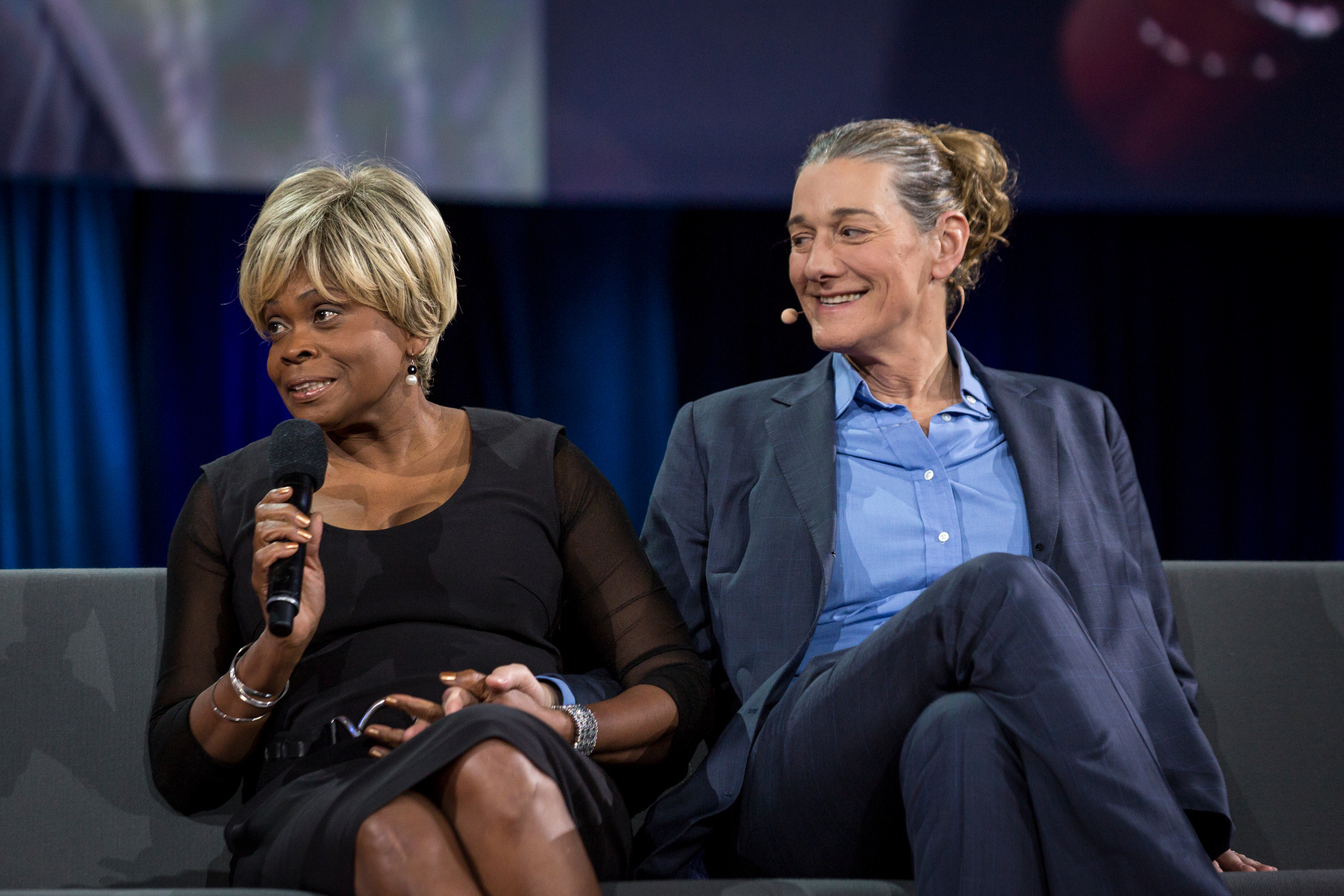 Bina Aspen and Martine Rothblatt have been married for a third of a century. They talk about the surprising way they hope their love will endure. Photo: Bret Hartman/TED

Martine Rothblatt has had an unusual career, informed by an extraordinary life. Rothblatt begins a Q&A with curator Chris Anderson by saying, “I’ve always loved space technology, and satellites to me are sort of like the canoes that our ancestors first pushed out into the water.” This passion led to bigger satellites and eventually to SiriusXM Radio in the early 1990s. Shortly after, Rothblatt transitioned from male to female, which her wife, Bina, welcomed. Said Bina, “I love your soul. Whether the outside is Martin or Martine, it doesn’t matter to me.” Around the same time their daughter Genesis, one of four kids, was diagnosed with pulmonary arterial hypertension, a rare and fatal condition. The country’s best doctors told Rothblatt her daughter would not survive – but in her usual fashion she refused the status quo and became an expert in the disease. Rothblatt started a nonprofit focused on pulmonary hypertension and poured all her energy into finding treatment. Thanks to Rothblatt, today Genesis is alive and well and fighting to help other people with orphan diseases. Meanwhile Rothblatt is working on creating an unlimited supply of transplantable organs created from the pig genome. (As one does.) She says, “It’s not rocket science. It’s straightforward engineering.” In her spare time Rothblatt also works on creating “mind files,” the collection of a person’s mannerisms, personality, recollection, beliefs and values. She’s already created Bina48, the robot version of her wife, as a mind file. Toward the end of her time on stage, the real Bina joins Rothblatt on stage, and adds that the two want to be cryogenically frozen: “We want to wake up together,” says Bina.

It is almost time for the giving of the 2015 TED Prize, but first a look back at the previous two winners. First, we get an update on Charmian Gooch’s 2014 wish to end anonymous companies from her Global Witness colleague Robert Palmer. In the past year, he says, the government in the United Kingdom has moved toward laws that will prevent anonymous companies, while, over in the United States, the group is making inroads in the business world. The biggest note of progress, he says, is in the arena of awareness. He points out the recent HSBC scandal and interest in property ownership in New York City. “I think a year ago, people would have seen these as two separate stories,” says Palmer. “But they’re starting to see that these problems are joined, and there’s a potential solution.”

We also get a video update on Sugata Mitra’s 2014 TED Prize wish to build a School in the Cloud. Not only has Mitra set up two branches in the UK and five in India, but he is now doing large-scale studies to measure how the method works in areas like reading comprehension, critical thinking and self esteem. “I learned by clicking on things,” says a girl in the video, pointing to a friend. “Others need to teach her.”

And with that, this year’s winner takes the stage.

Dave Isay felt an intense moment of purpose while standing in a room in one of the last flophouses on the Bowery in New York City. Isay was showing a resident there a page in a book he had just published: a page about the resident. “He grabbed the book out of my hand and started running down the hallway, shouting: ‘I exist!’” This, says Isay, could be the motto for his oral history project, StoryCorps. It began with an interview booth in Grand Central Terminal 11 years ago and has blossomed into “the largest single collection of human voices ever gathered”; each interview is archived at American Folklife Center at the Library of Congress. Isay is our TED Prize winner and, tonight, he is here to share a bold wish. “My wish is that you will help us to take everything we’ve learned through StoryCorps and bring it to the world,” he says. He holds up his cell phone, and announces a StoryCorps app, designed to bring the process of interviewing loved ones out of booths and into environments of all kinds. His vision is that anyone, anywhere, at any time can record a StoryCorps interview and have their life experience documented for posterity. And so, he says, the real challenge is up: who will we interview? Read a full recap of this talk.

Joey Alexander is an old soul. Born in Bali and raised on his dad’s old jazz records, he plays a brand of sharp, modern piano jazz that you might not expect to hear from a pre-teenager. But sophisticated runs pour out from his small fingers as he grooves his way through a jazz arrangement of “Over the Rainbow.” Like many an old session player, his first words to us after the song are a husky “Good evening” ; it’s like being in a smoky jazz club run by 11-year-olds. But Joey wants to tell us about why jazz sends him: “Jazz is a language that unites people. When you play in a jazz band you have to listen, work together, share, trust each other and be open to possibilities. Jazz is a lot of fun because it’s all about freedom and creativity, always in the moment, always something new.” And with that, he rocks into a percussive take on “Monk’s Dream.” 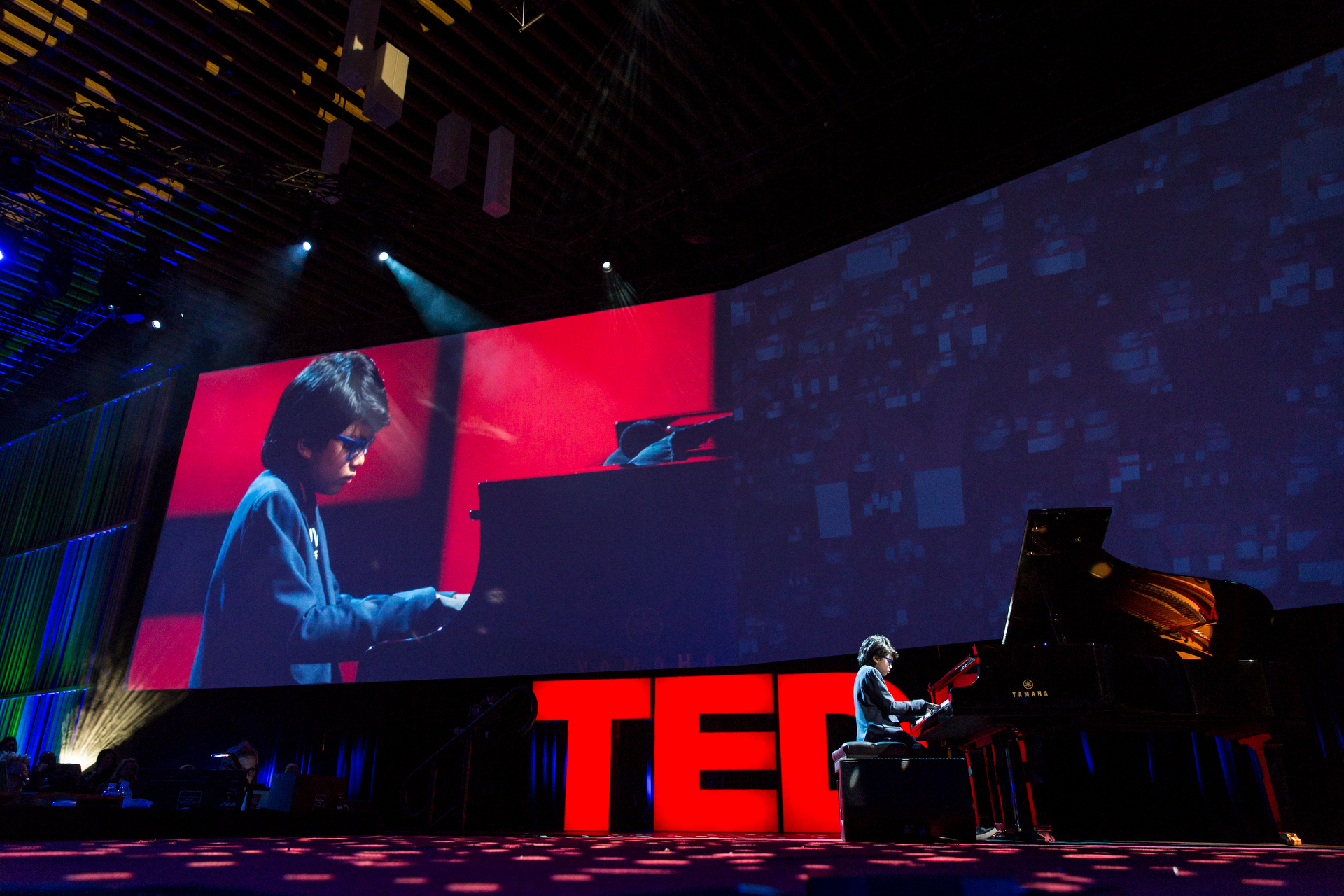