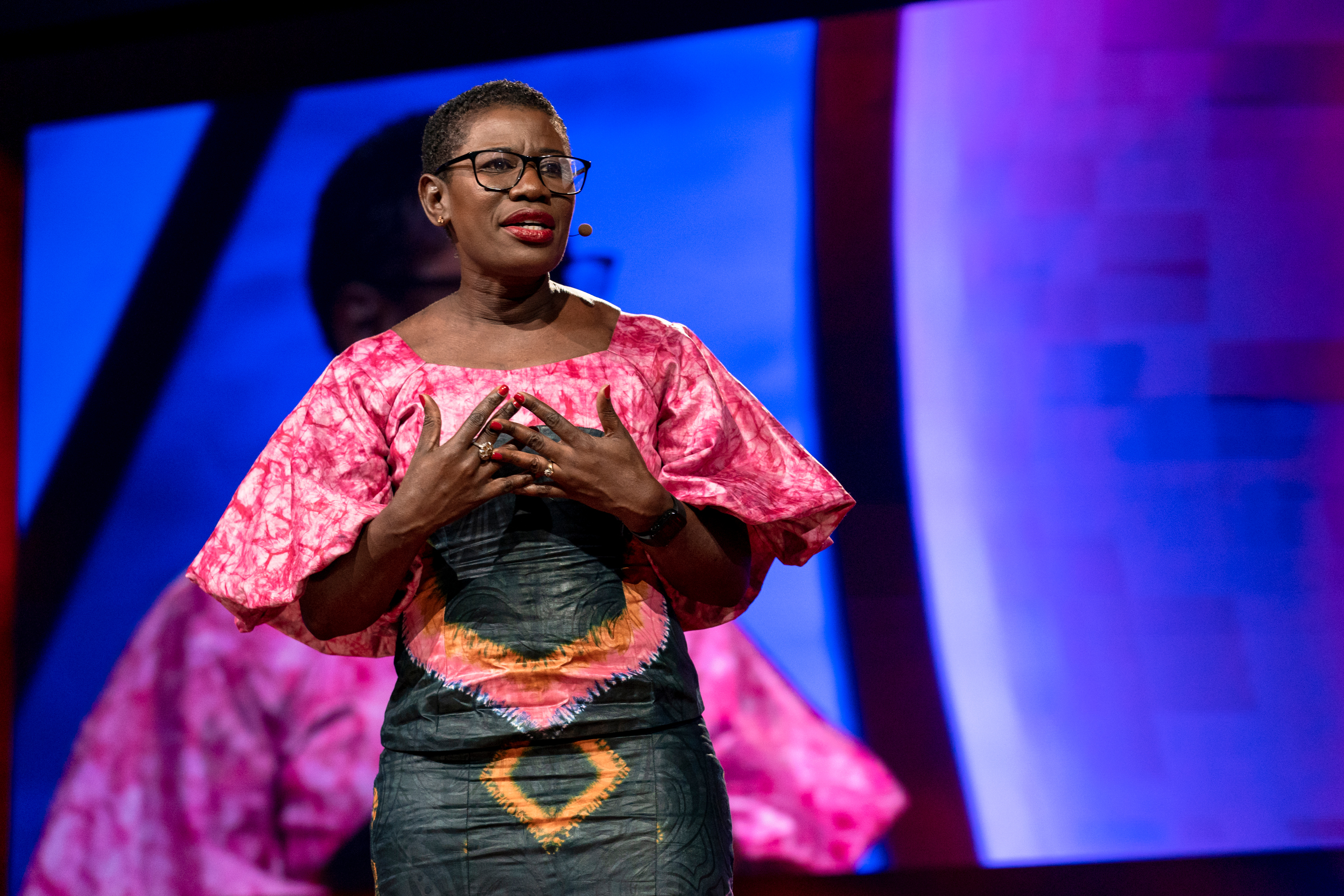 Session 5 of TEDWomen 2019 is all about seeking meaning: in our political lives, creative lives, healthcare systems, criminal justice and beyond.

Big idea: We can catalyze positive change by channeling feelings of dissatisfaction into collaboration and action.

How? After learning of the devastating rebel invasion of Freetown in 1999, and the details of the 2014 Ebola epidemic, Yvonne Aki-Sawyerr was struck by profound feelings of anger and discontent. But instead of becoming frozen and overwhelmed by those feelings, she decided to act. This movement from dissatisfaction to action is the key to creating dramatic change, Aki-Sawyerr says. In 1999, she cofounded the Sierra Leone War Trust for Children, supporting and advocating for refugees of Sierra Leone’s rebel invasion. During the Ebola epidemic, Aki-Sawyerr designed the Western Area Surge Plan, which prioritized collaborating with community members to stop the spread of the virus. Now, as mayor of Freetown, she’s bringing together the city to translate their frustrations into actionable solutions.

Quote of the talk: “The steps to address that deep sense of anger and frustration I felt didn’t unfold magically or clearly. That’s not how the power of dissatisfaction works. It works when you know that things can be better, and it works when you decide to take the risks to bring about that change.”

Big idea: High drug prices are fueling crushing debt, causing families immense hardship, including loss of life. These prices, in turn, are made possible by an outdated patent system that’s easily exploited by the pharmaceutical industry to perpetuate drug monopolies that extend for years beyond their original patents.

How? Between 2006 and 2016, drug patents doubled. But consider this: the vast majority of medicines associated with new drug patents are not new, with nearly eight out of ten being for existing medicines, like insulin or aspirin. Priti Krishtel believes that US patent reforms would dramatically reduce medical costs. We can start by banning new patents for trivially modified drugs, removing financial incentives for the Patent Office (which currently gets paid based on granted patents), increasing the transparency of the patent process, empowering the public to challenge patents in court, and introducing robust patent oversight mechanisms.

Quote of the talk: “The higher a patent wall a company builds, the longer they hold on to their monopoly. And with no one to compete with, they can set prices at whim — and because these are medicines and not designer watches, we have no choice but to pay.” 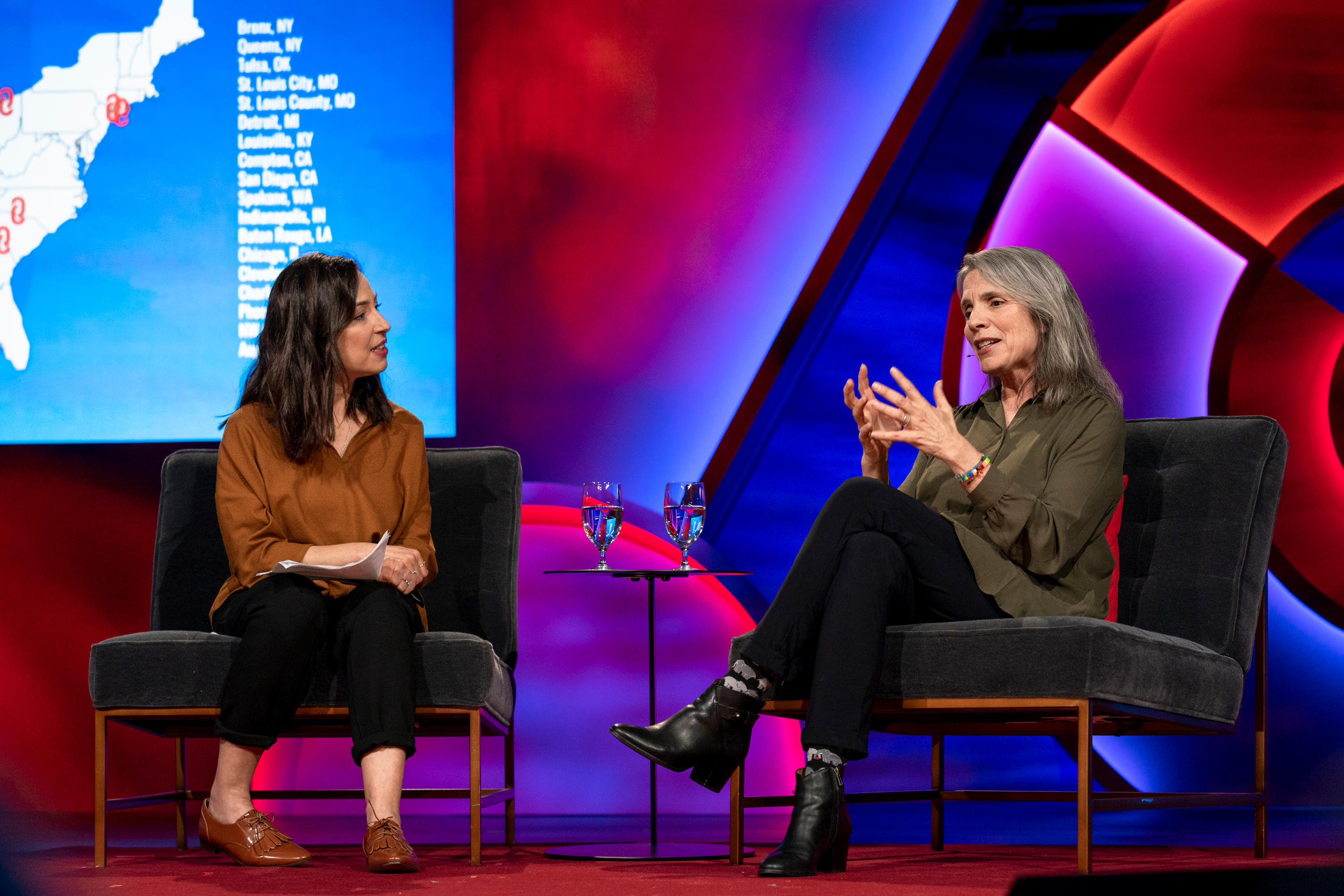 Big idea: We need to end the injustice of cash bail in the United States criminal justice system.

Why? In conversation with journalist Manoush Zomorodi (the new host of the TED Radio Hour), Robin Steinberg gives an update on her 2018 TED Talk about the work of her nonprofit The Bail Project. Here’s the problem: on any given night, more than 450,000 people in the US are locked up in jail simply because they don’t have enough money to pay bail. The sums in question are often around $500: easy for some to pay, impossible for others. This has real human consequences: people lose jobs, homes and lives, and it drives racial disparities in the legal system. Now, with support from the The Audacious Project, Steinberg’s nonprofit is scaling up their efforts — growing their revolving bail fund, expanding the on-the-ground presence of their bail disruptors and rolling out a community-based model that gives local support to people before they are convicted of a crime.

Quote of the talk: “Each and every one of us is implicated in what our criminal legal system looks like. There is no escaping that.” 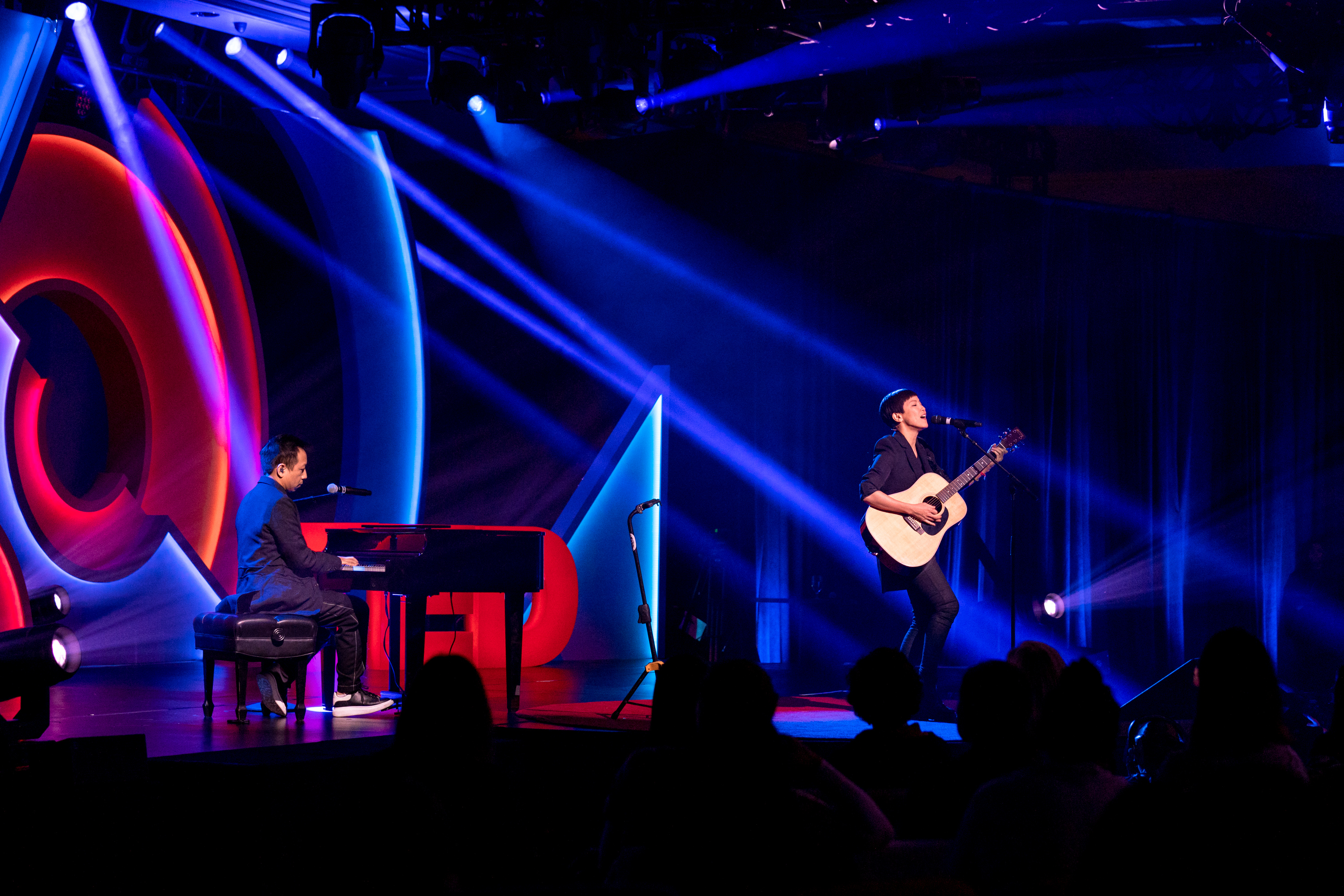 “Creativity is what the tyrants cannot control, nor repress,” says Denise Ho. She speaks and performs at TEDWomen 2019: Bold + Brilliant, on December 5, 2019, in Palm Springs, California. (Photo: Stacie McChesney / TED)

Big idea: In a stirring talk and performance, banned Cantopop superstar Denise Ho gives the TED audience a taste of a dissident’s life in 2019 Hong Kong — and a glimpse into a protest movement that persists in the face of constant oppression by the Hong Kong government and their allies on the mainland.

How? As an activist in the 2014 pro-democracy Umbrella Movement, Denise Ho joined her fellow citizens on the streets of Hong Kong for 79 days. Although she was ultimately arrested, censored and banned, she moved her career underground. She remains a crucial voice for democracy and a dedicated fighter in a leaderless movement battling to preserve autonomy for Hong Kong through spontaneous actions that the authorities are unable to predict or control.

Quote of the talk: “Creativity is what the tyrants cannot control, nor repress. WIth their very powerful but slow machine, it takes time for them to react to new ideas. Whether it is the protest on the streets that is taking a new fluidity, or the way that people reinvent themselves, the system needs time to counter it to find solutions. … When they do, we would have already moved on to the next idea.”

Big idea: The memory of Pele de Vidro, the iconic São Paulo tower, continues to be a poignant reflection of Brazil’s past, present and future.

Why? The Pele de Vidro (which translates to “Skin of Glass”) has been a symbol of modernity in Latin America since the early-1960s, when Denise Zmekhol’s father designed the São Paulo landmark. Yet, it wasn’t until many years after his death that she learned what went on behind its closed doors. As she reconnected with her late father’s memory and filmed a documentary in 2017, she discovered that “the glass walls of this building became a mirror reflecting the glory and turmoil of our beloved Brazil.” But before she could set foot inside, the unimaginable happened: a massive fire swallowed the iconic building. Zmekhol grieved for the city and her father. But today, she is hopeful. Architects are planning to build a cultural lab at the site of the Pele de Vidro to pay tribute to her father and the landmark that meant so much for so many.

Quote of the talk: “Ironically, only after the building was gone could I understand the role it played in so many lives.”

Big idea: What if those in poverty were a part of the city planning process?

Why? Within many cities there exists another city — informal communities, hundreds of thousands of people strong. 881 million people across the world who live in these settlements and slums — some as large as townships (Kibera, Nairobi; Dharavi, Mumbai; and Khayelitsha, South Africa, to name a few) — are under threat of being displaced at any time in the name of real estate development. Smruti Jukur urges governments and those in power to work in tandem with these settlements, instead of choosing what they think is right for their citizens. Jukur offers a real-world example, happening right now in Mukuru, Nairobi, where respect, empowerment and collaboration is helping leaders and their residents build a more inclusive city for tomorrow.

Quote of the talk: “Poverty only changes affordability. It does not change aspirations.” 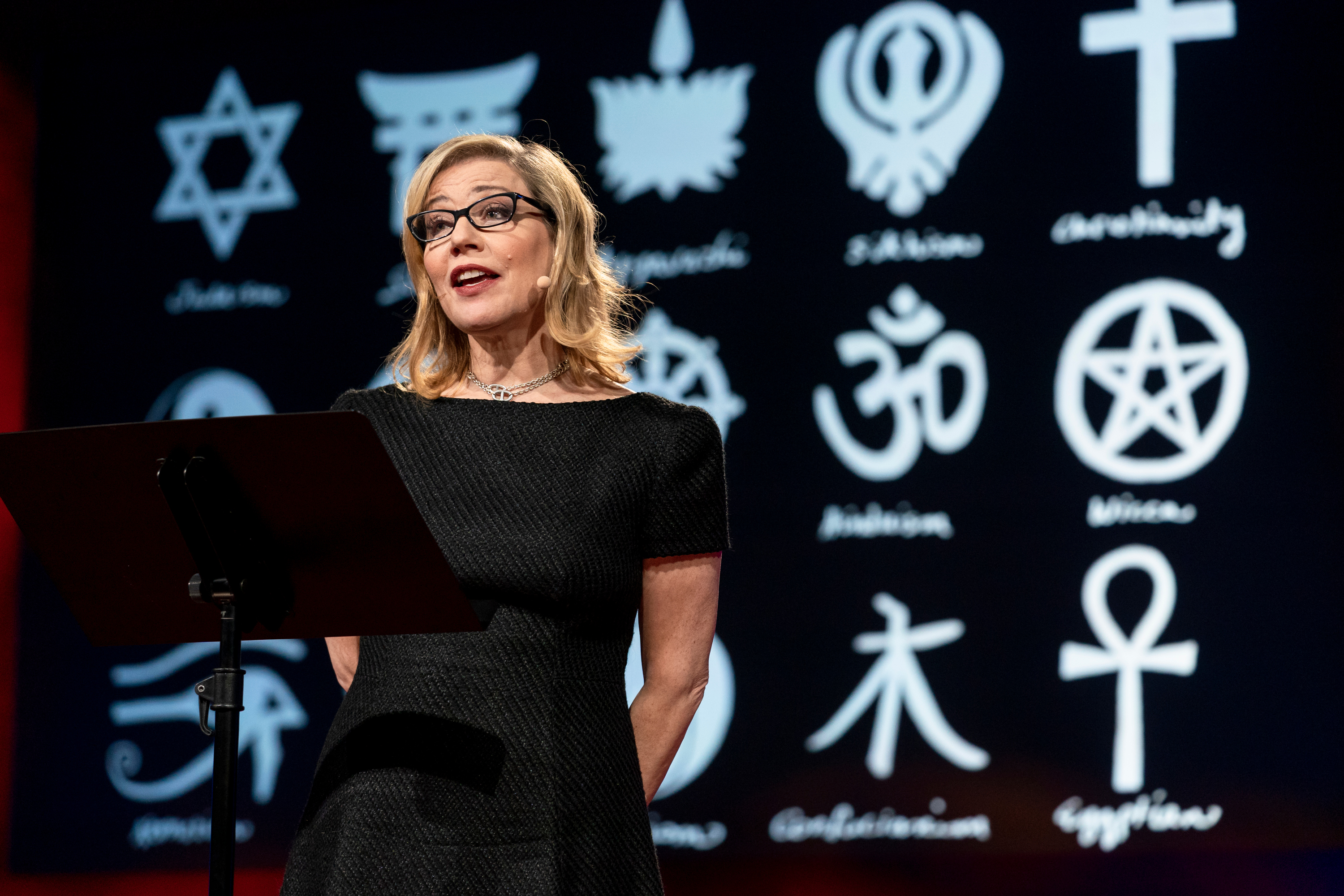 “Branding is not just a tool of capitalism. Branding is the profound manifestation of the human spirit,” says Debbie Millman. She speaks at TEDWomen 2019: Bold + Brilliant, on December 5, 2019, in Palm Springs, California. (Photo: Marla Aufmuth / TED)

Big idea: The ability to create meaning through symbols and logos doesn’t just belong to big corporations. It belongs to all of us.

Why? Since the early days of human society, we have created community through shared symbols. In fact, some of the first religious symbols were not created by any church or leader, but by communities themselves, explains Debbie Millman. Unique marks and logos have come to indicate ownership or belonging in a variety of ways, from branding cattle to the first trademarked brand in the United States: a beer. But for the last few hundred years, this ability has largely belonged to companies with the means to trademark and advertise something as recognizable as the Nike swoosh. Now, online culture is changing things, Millman says. Social media can amplify messages, and branding has reverted to something created by and for people. The creation of the pussy hat for the 2017 Women’s March is just one example of how the internet grants us the democratic capacity to make shared meaning.

Quote of the talk: “Branding is not just a tool of capitalism. Branding is the profound manifestation of the human spirit.”