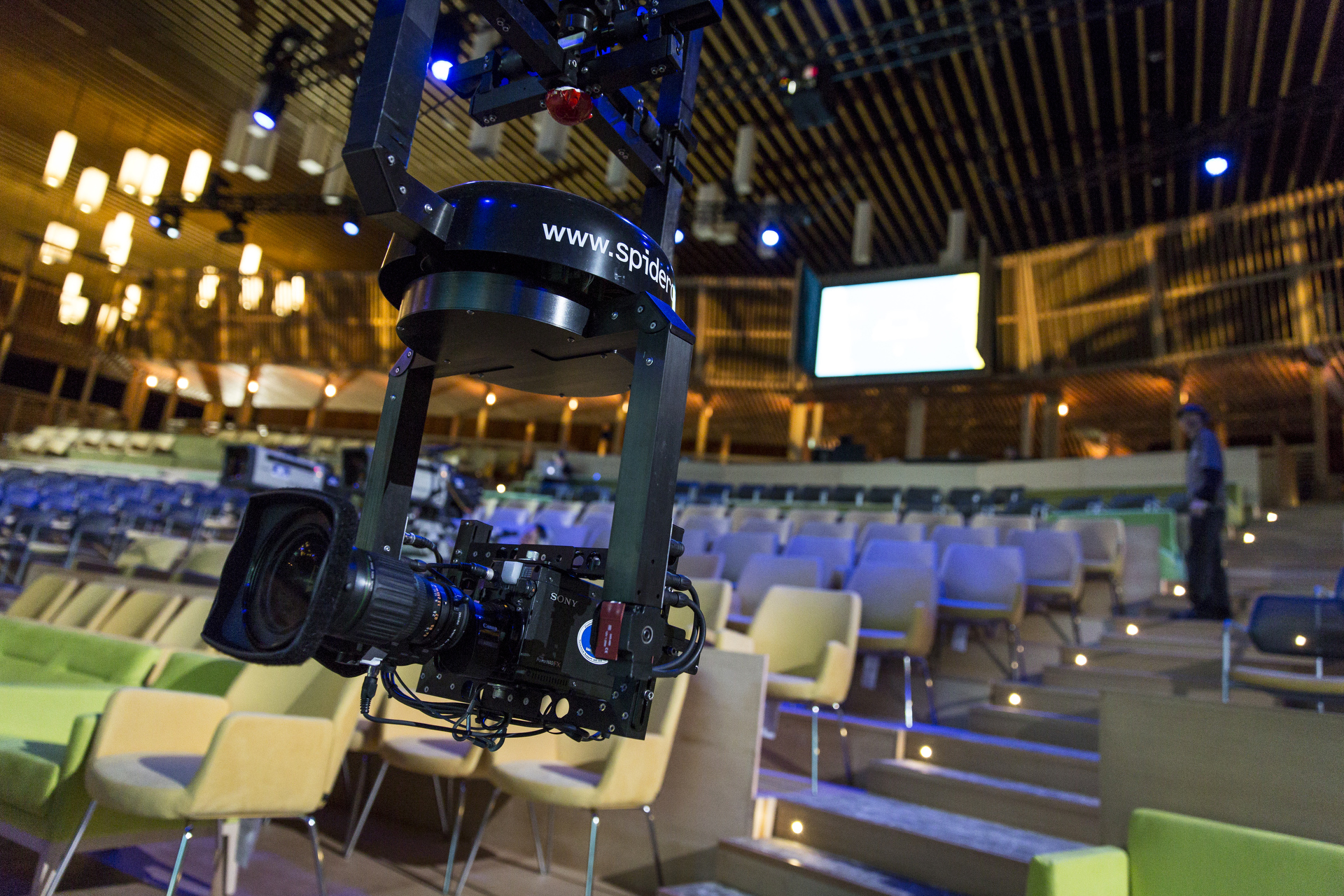 The Spidercam gets set up in the TED2015 theater. Photo: James Duncan Davidson/TED

TED Talks are 18-minute talks shared with the world for free online. However, lots of these talks are given at TED Conferences, in sessions that span more than an hour, with an audience who has paid to be a part of the live experience. This leaves our video team with a balancing act: how do they capture talks on camera, getting the wide variety of shots they need, while also making sure that they aren’t taking the audience out of the moment with cameras zooming through their sight lines?

Enter the Spidercam. At TED2015, our video team is trying out a new camera rig that they hope might help them navigate this tension. While there will be four stationary cameras in the audience and two filming onstage — to capture a variety of close-ups, medium and wide shots — the Spidercam will capture talks from the air.

Officially called a “computerised cable camera system,” the Spidercam will be mounted far above the seats of the theater. Four thin Kevlar cables have been stretched overhead, each originating in a different point and meeting in the middle to form an X. At the meeting point, a swift and nimble camera moves across the web thanks to motorized “winches.”

A team of three pilots will operate the system. From a control station, they will issue commands to spool and unspools the cables quickly, bringing the camera to any point they want to film from. At the same time, they’ll control the camera’s swivel, tilt, zoom and focus.

“This camera can explore almost the entirety of the theater in 360 degrees,” says video production lead Angela Cheng. “It can give you crazy shots.”

The Spidercam moves quickly. Typically used to follow the fast action in football and basketball, and to create soaring shots over concerts and awards shows, the system can capture shots that once would have been impossible — or at least incredibly expensive. But, stresses Cheng, it won’t be about trick shots at TED.

“We have this custom-built theater that’s designed to create intimacy,” she says. “We’re trying to leverage the Spidercam to make sure we show the beautiful sweep of the architecture and really connect the audience members with the speaker.” 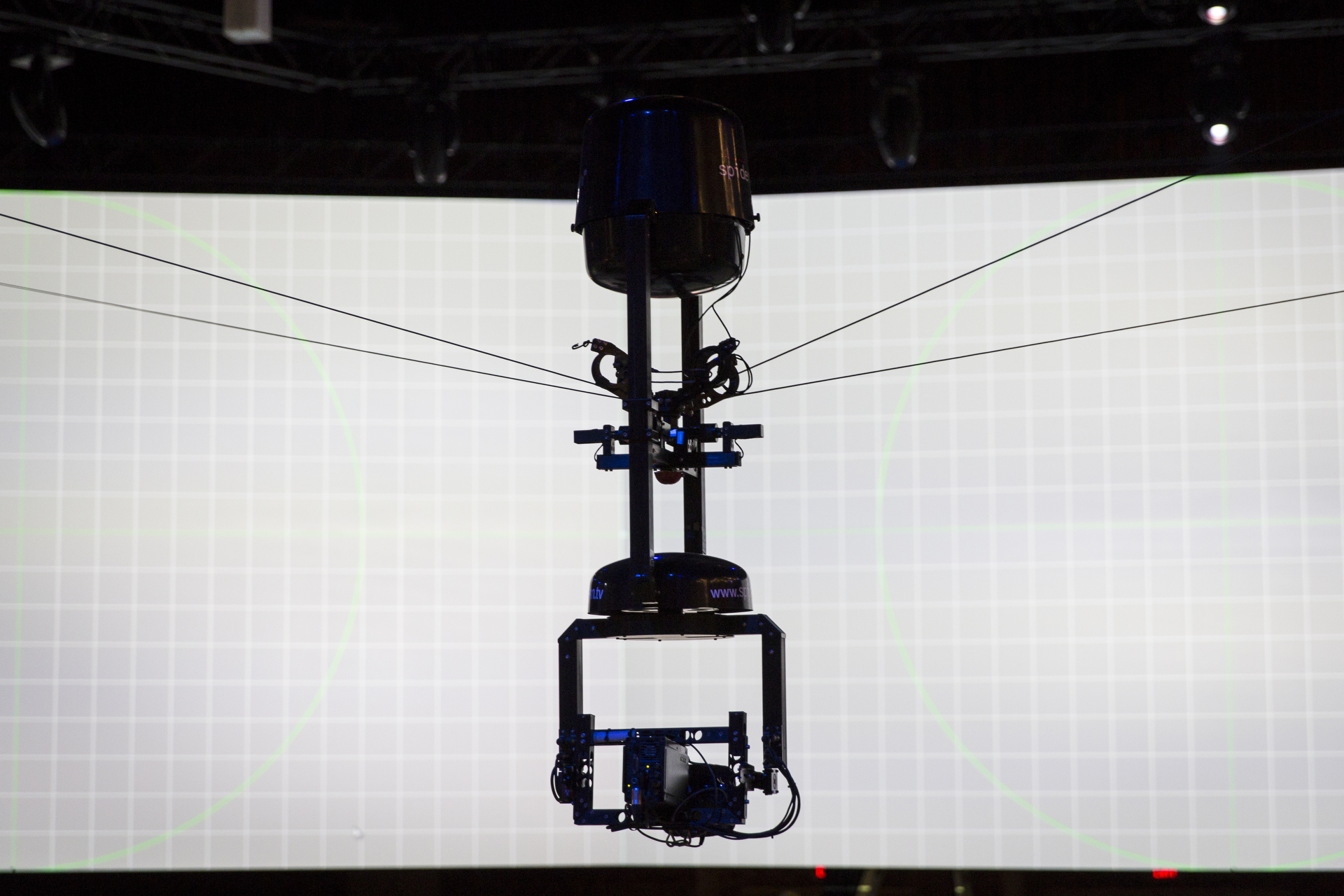 The Spidercam on its four cables in the TED theater. Photo: James Duncan Davidson/TED

This is not our video team’s first experiment in adding movement to shots. In 2009, the team used a jib, a camera on a long metal arm that allows the camera operator to move it vertically and horizontally.

“It gives a sense of space and connects the audience with the speaker,” says Cheng. “But it’s limited.”

In 2010, they used a dolly— a camera on a track that allows the operator to smoothly slide with the speaker to capture pacing and movement.

At TED Talks Education, the team used a Steadicam, a stabilizing system which mounts the camera on a person’s body. “It moves right into the audience and shows us that intimacy,” says Cheng. “But it means that there’s a person roving around in the audience.”

Cheng and her team are hopeful that the Spidercam will do the work of many of these rigs without the same constraints.

“It will allow us to film from up high and wide, and from there to slowly push in to the speaker,” says Cheng. “Or it can capture a demo by shooting overhead.”

While the team is excited to see what the Spidercam can do, they promise not to go too crazy with it. One concern, for example: will the Spidercam cast shadows over the audience or speaker?

“We hope that it gives us more versatility in how we tell a story,” says Cheng. “But we may not end up using it to its fullest capacity. We want to exercise restraint … There’s always that tension between getting great shots but respecting the audience experience. That always has to guide our techniques.”