How can we better understand the world within and around us?

In the thought-provoking fifth session of TED2017, hosted by TED’s Editorial Director, Helen Walters, talks about neuroscience, philosophy, cognitive science — and a special experiment in behavioral science — explored issues like filter bubbles, Alzheimer’s and the very essence of existence.

Below, recaps of the talks from Session 5, in chronological order.

A philosopher’s solution to the filter bubble. We carry a world of information with us today, thanks to our smartphones. Yet, at the same time, “it’s as if we know more but we understand less,” says philosopher Michael Patrick Lynch. Most of us reside in our own polarized information bubbles, and while they’re not a new phenomenon, the data analytics that drive the internet mean they’re constantly inflated with more of our preferences. While Lynch applauds efforts by Google, Facebook and tech companies to address the situation, he doesn’t think it’s a technological problem; it’s a human problem. “To solve [it], we’re going to need to reconnect with one fundamental philosophical idea: that we live in a common reality,” he says. To do that, we should do three things. First: believe in truth. Resist thinking objective truth doesn’t exist — and resist dismissing the ideas and stories you don’t like as fake news. Because, as Lynch adds, “The really dangerous thing about skepticism with regard to truth is it leads to despotism.” Next: dare to know for yourself. While we’re swimming in knowledge, “much of what we know today we Google-know — we download pre-packaged sets of facts,” says Lynch. “But there is a difference between downloading … facts and really understanding how or why those facts are as they are.” He urges us to embrace more active, investigative and imaginative forms of comprehending. Last: have a little humility. “We need to see our own worldview as open to improvement and enrichment by the evidence and experience of other people,” he says. Why is accepting a common reality so important? Nothing less than our democracy depends upon it, Lynch says. As polarization threatens to drive us apart, he says, “We need to remember that our perspectives, as beautiful and as wondrous as they are, are just that — perspectives on one reality.” 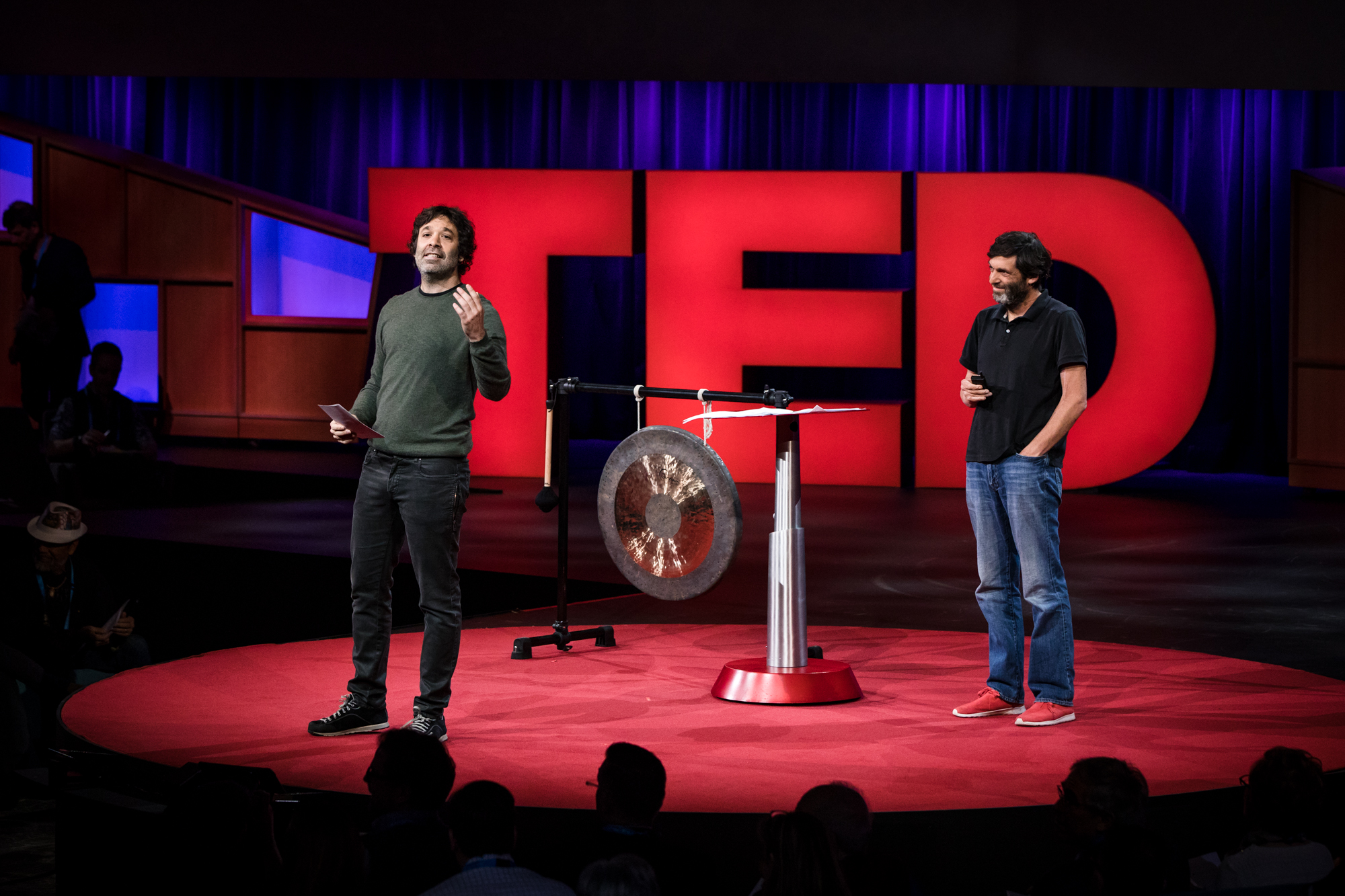 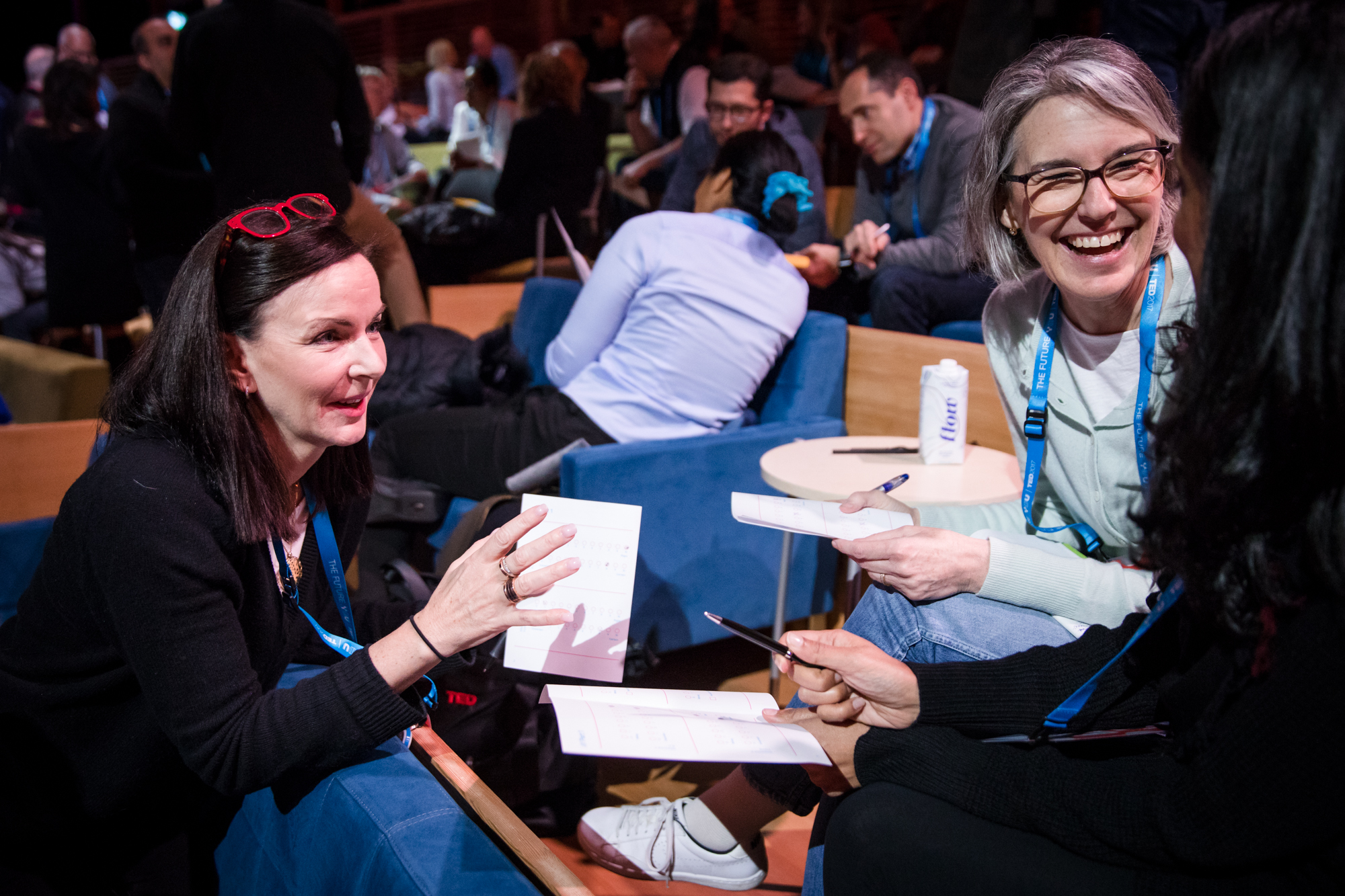 A novel audience experiment. “We’re going to do science here,” says neuroscientist Mariano Sigman. In a different spin on the typical TED talk, Sigman and behavioral economist Dan Ariely guide the audience through an interactive thought experiment. Is it acceptable to unplug an AI that is begging you to leave it plugged in? What about choosing embryos based on eye color or intelligence? After ranking their own responses to these tough moral dilemmas, audience members meet in random groups to discuss and see if they can reach a consensus on the question together. This is just a sliver of the research Ariely and Sigman have been conducting on “the rigidity of our moral borders” to see “when and why we’re willing to negotiate our principles.” They’ve found that group responses are more accurate if they have had time to discuss together than if they record responses independently. In a climate of rigid moral stances and information bubbles, Ariely and Sigman think this insight “may help us think how to construct a better democracy.” 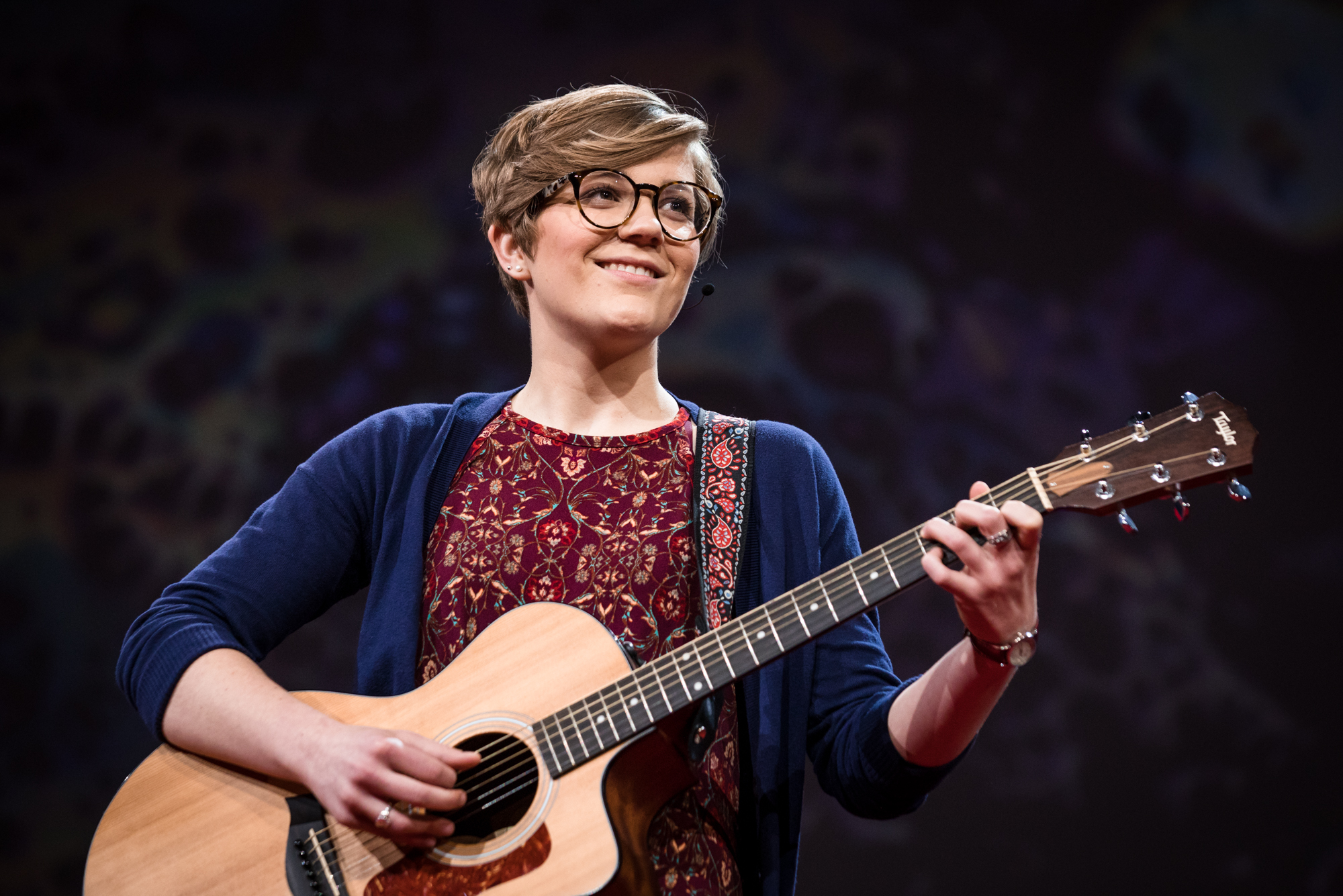 The music of life. Anika Paulson‘s life moved to the rhythms she’d tap out on her leg while walking through the halls of her high school. In a music theory class, she began to think more deeply about beats. “Rhythm sets a foundation for the melodies and harmonies to play on top of. It gives structure and stability,” she says, strumming a guitar. “Where music has rhythm, we have routines and habits, things that help us remember what to do and how to stay on track. It may seem simple, it may seem dull by itself — but it gives tempo, heartbeat.” Friends and family, she says, these create “harmonic structure in your life, in your song.” Paulson abruptly stops strumming. When she went to college, she says, she lost her rhythm. She began to hear other noises, off-tempo, and she feared her song was gone. But it wasn’t. She found her rhythm again, and while her melody had changed, it was still the same song. Paulson began sharing this lyrical idea in a TED-Ed Club, and she spoke at the first TED-Ed Weekend in New York City in 2016. But here, with the TED2017 audience, they connect to the message too. “Music is my way of coping with the changes in my life,” she says, in a new movement of her song. “Music is everywhere and in everything. It changes and it builds, but it’s always there.” 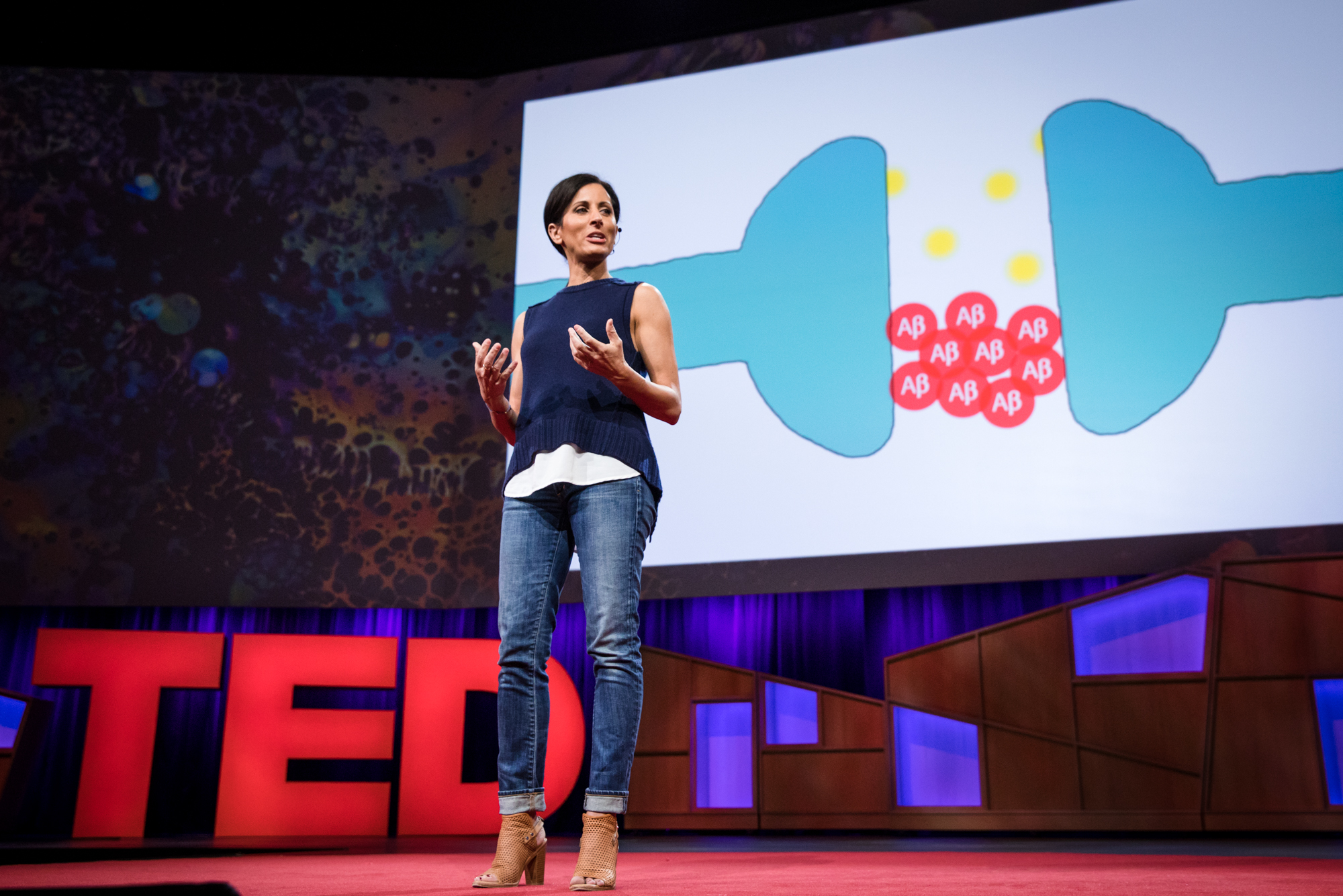 Lisa Genova writes about neuroscience — and shares a few things we can do to prepare for Alzheimer’s — at TED2017, April 26, 2017, Vancouver, BC, Canada. Photo: Bret Hartman / TED

What can you do about Alzheimer’s? “Part of the fear around Alzheimer’s stems from the fact that there’s nothing we can do about it,” says neuroscientist and author of Still Alice Lisa Genova. “Alzheimer’s appears to be our brain’s destiny, but maybe it doesn’t have to be.” Most scientists believe the disease is caused by a buildup of amyloid plaque in the brain. When the buildup reaches a tipping point, synapses are destroyed — and memory, language and cognition start to degrade. While genes do play a role, habits like adequate sleep, aerobic exercise and a healthy diet can help delay or prevent disease onset. However, even if the brain does reach the tipping point, it’s not necessarily too late. “We can be resilient to the presence of Alzheimer’s pathology through the recruitment of yet-undamaged pathways,” Genova says. “We create these pathways, this cognitive reserve, by learning new things.” And even if Alzheimer’s does come, Genova shares three lessons. One, diagnosis doesn’t mean you’re dying tomorrow; keep living. Two, you won’t lose your emotional memory of what joy and love feel like. And three, you are more than what you can remember.

Welcome to the age of “ems.” Imagine, if you will, that humans invent the technology to port the software of the human brain into a machine. These emulations, or “ems,” as economist Robin Hanson affectionately calls them, will look like hardware in server racks — but because they live in virtual reality and experience it as real, they’ll feel surrounded by beautiful environments. Ems have the ability to run faster or slower, so in their own way, they can bend time. They can also split off short-term copies of themselves to do specific tasks, and while the original won’t have memories of what the copies do, these ems will be able to accomplish an incredible amount. Their lifelines will have branches and spokes, rather than proceeding linearly. “The typical em is a copy of the couple hundred most productive humans,” says Hanson. They’ll be as elite as Nobel Prize winners. They can move around the world at the speed of light — and they’ll live in massive cities that make ours look quaint, because proximity means better interaction. So, what about humans in this world? “Humans must retire at once, for good. They just can’t compete,” he says. Humans who own capital will get wildly rich, while ems will work around the clock. Because for all their abilities, ems will be very poor, as their population will outpace their economy. Hanson isn’t here to dwell on the ethical quandaries of all this — he’s just here to tell us what would happen. And yet, he says, “If you aren’t at least a bit disturbed by something I tell you here, you aren’t paying attention.”

How does consciousness happen? “We’re all hallucinating all the time, says cognitive scientist Anil Seth. “And when we agree about our hallucinations, that’s what we call ‘reality.'” In a wonderful, experiment-filled talk that may leave you questioning your very existence, Seth explains how his research has shown that our experiences of consciousness happen with, through and because of our living bodies. “We are part of, not apart from, the rest of nature,” Seth concludes. Read a full recap of his talk here.