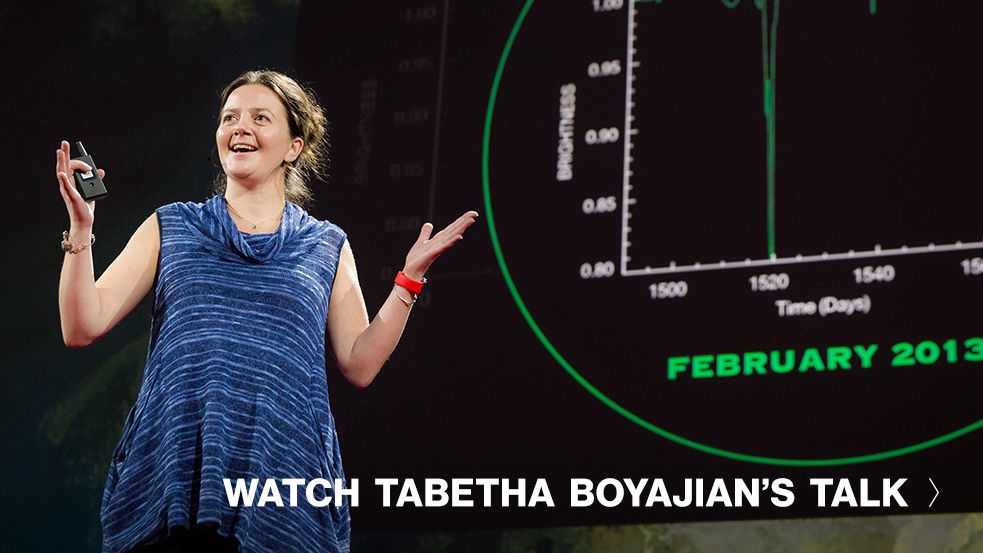 New clues about the most mysterious star in the universe. KIC 8462852 (often called “Tabby’s star,” after the astronomer Tabetha Boyajian, who led the first study of the star) intermittently dims as much as 22% and then brightens again, for a reason no one has yet quite figured out. This bizarre occurrence led astronomers to propose over a dozen theories for why the star might be dimming, including the fringe theory that it was caused by an alien civilization using the planet’s energy. Now, new data shows that the dimming isn’t fully opaque; certain colors of light are blocked more than others. This suggests that what’s causing the star to dim is dust. After all, if an opaque object — like a planet or alien megastructure — was passing in front of the star, all of the light would be blocked equally. Tabby’s star is due to become visible again in late February or early March of 2018. (Watch Boyajian’s TED Talk)

TED’s new video series celebrates the genius design of everyday objects. What do the hoodie, the London Tube Map, the hyperlink, and the button have in common? They’re everyday objects, often overlooked, that have profoundly influenced the world around us. Each 3- to 4- minute episode of TED’s original video series Small Thing Big Idea celebrates one of these objects, with a well-known name in design explaining what exactly makes it so great. First up is Michael Bierut on the London Tube Map. (Watch the first episode here and tune in weekly on Tuesday for more.)

The science of black holes. In the new PBS special Black Hole Apocalypse, astrophysicist Janna Levin explores the science of black holes, what they are, why they are so powerful and destructive, and what they might tell us about the very origin of our existence. Dubbing them the world’s greatest mystery, Levin and her fellow scientists, including astronomer Andrea Ghez and experimental physicist Rainer Weiss, embark on a journey to portray the magnitude and importance of these voids that were long left unexplored and unexplained. (Watch Levin’s TED Talk, Ghez’s TED Talk, and read Weiss’ Ideas piece.)

An organized crime thriller with non-fiction roots. McMafia, a television show starring James Norton, premiered in the UK in early January. The show is a fictionalized account of Misha Glenny’s 2008 non-fiction book of the same name. The show focuses on Alex Goldman, the son of an exiled Mafia boss who wants to put his family’s history behind him. Unfortunately, a murder foils his plans and to protect his family, he must face up to various international crime syndicates. (Watch Glenny’s TED Talk)