Teenagers. They’re not exactly known for their listening skills. But over Thanksgiving weekend of 2015, high school students across the United States sat down with elders and asked them deep, meaningful questions about their lives. More than 50,000 people — most in their teens — took part in the Great Thanksgiving Listen and recorded an interview using the StoryCorps app. A 14-year-old in Georgia heard what it was like for her grandmother to go to bed hungry; students in Colorado heard one man’s experience of enlisting during the Vietnam War; and a teen in Louisiana found out that her grandparents got engaged at a drive-in movie.

The StoryCorps app launched in March 2015, when StoryCorps founder Dave Isay won the TED Prize. But Isay says that the app’s first real test came in November during the Great Thanksgiving Listen. The event proved to him that the app — which lets anyone record an interview, and upload it to the Library of Congress — could exponentially increase the number of voices in StoryCorps’ archive. The 50,000 interviews recorded over Thanksgiving weekend doubled the number of interviews the organization recorded in its first 10 years combined.

“A year ago, I stood on this stage with a dream: to see if we could use technology to scale the incredibly intimate StoryCorps interview experience,” says Isay in the talk above, given as an update at the TED2016 conference. He shared the app’s stats — that it has now been downloaded 602,000 times, and used to record more than 81,000 interviews. But the real triumph is in quality. Isay notes that these interviews have the same depth and intensity of those recorded in StoryCorps booths; the difference is that interviews recorded with the app are “more informal” and “spontaneous.” These interviews, says Isay, take place “in basements and bedrooms, in kitchens and classrooms and cars.”

Andrew Goldberg works at StoryCorps, and is listening to interviews recorded with the app. In Great Thanksgiving Listen recordings, he’s noticed a few themes: the fight for civil rights, immigration to the United States, the hardships of military service. Another theme surprised him: September 11. “High school seniors were only about 3 years old when it occurred,” he said. “They want to know where their interview partner was at the time, how they learned about it, and if they felt scared.”

In general, both Goldberg and Isay — who listens to app interviews every Sunday evening — notice universals running through these interviews. There’s almost always discussion of love, and advice for what really matters in life. In a large number of recordings, the person being interviewed says either, “I have never told you this before,” or “I always wanted to share this with you.”

Over the past year, StoryCorps has worked with organizations to find creative ways to document voices typically excluded from media. At the annual National Cowboy Poetry Gathering in Elko, Nevada, participants interviewed each other about life in the rural West. At the Women’s International League for Peace and Freedom, attendees spoke to find the connective tissue between women’s experiences in different parts of the world, be they a Syrian journalist or an Iranian lawyer.

Still, only a small percentage of app interviews have been recorded outside of the US — which offers a big growth opportunity. “We’re still a couple of years away from truly going international,” says Isay. “One thing we’ll be doing this year is making it easy for the app to be translated into other languages.”

Also in the plans for the next year: a redesign that will make the app a hub for listening to StoryCorps content. Other improvements will make the interview recording process more seamless, as Isay thinks what’s been recorded so far is “the tip of the iceberg.” In the next year, Isay hopes to double the number of interviews recorded with the app in its first year.

The Great Thanksgiving Listen will take place again in 2016, and StoryCorps is working to strengthen its relationships with schools and educational organizations with an eye toward making interviews a standard part of the high school curriculum. Interviews give a first-person look at history, but they also teach students how to listen, says Isay. It’s something he fears could become a lost art.

“We live at this moment when our means of communication are advancing so quickly, while at the same time we don’t seem to be able to hear each other anymore,” he says in the talk above. “I heard someone say recently that hate is louder than love, and there’s some truth to that. We’re going to keep working with every cell in our bodies to turn up the volume on love.” 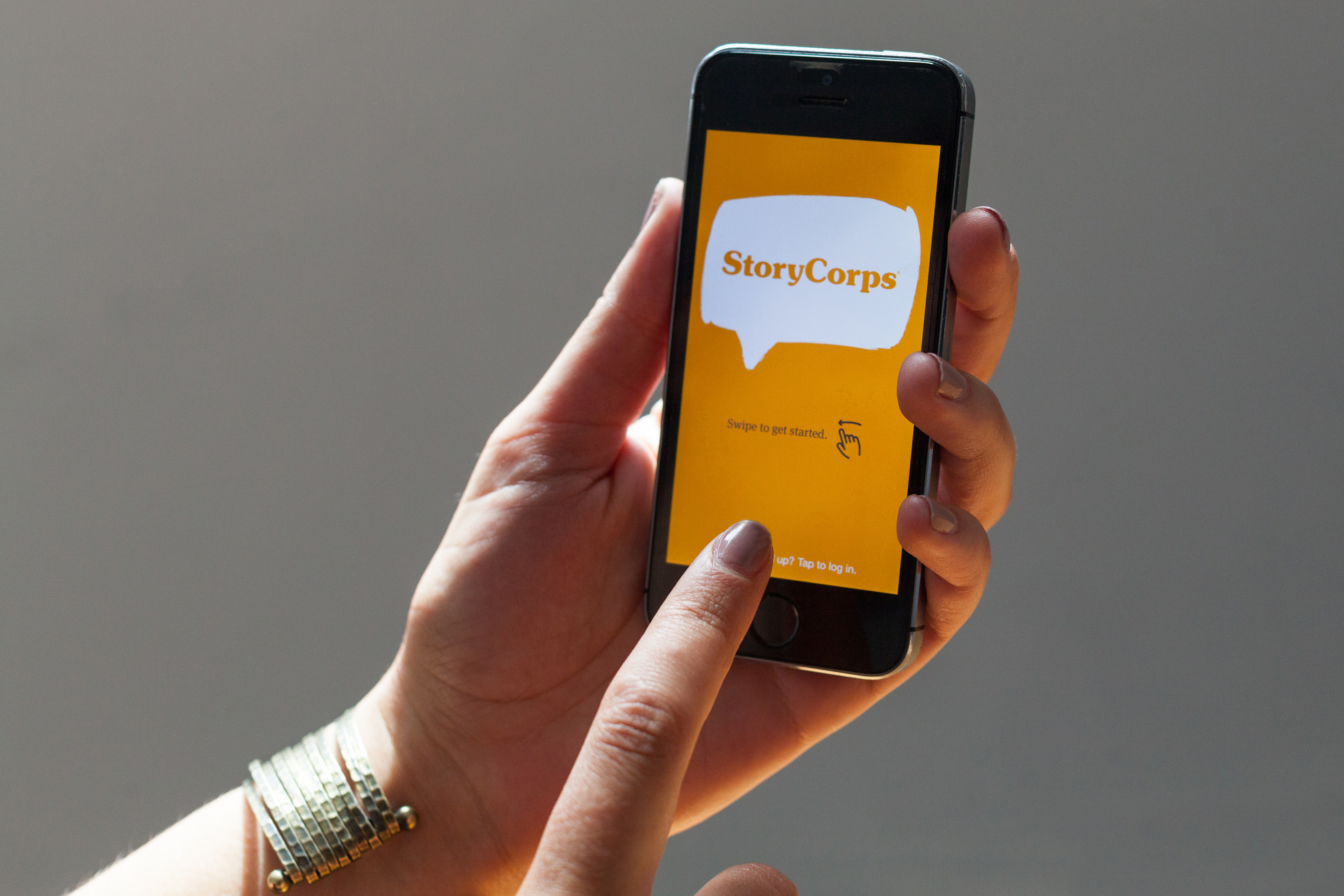 The StoryCorps app was launched with the 2015 TED Prize. In its first year, more than 81,000 interviews have been recorded using it. It has more than doubled StoryCorps’ archive of voices. Photo: Courtesy of StoryCorps