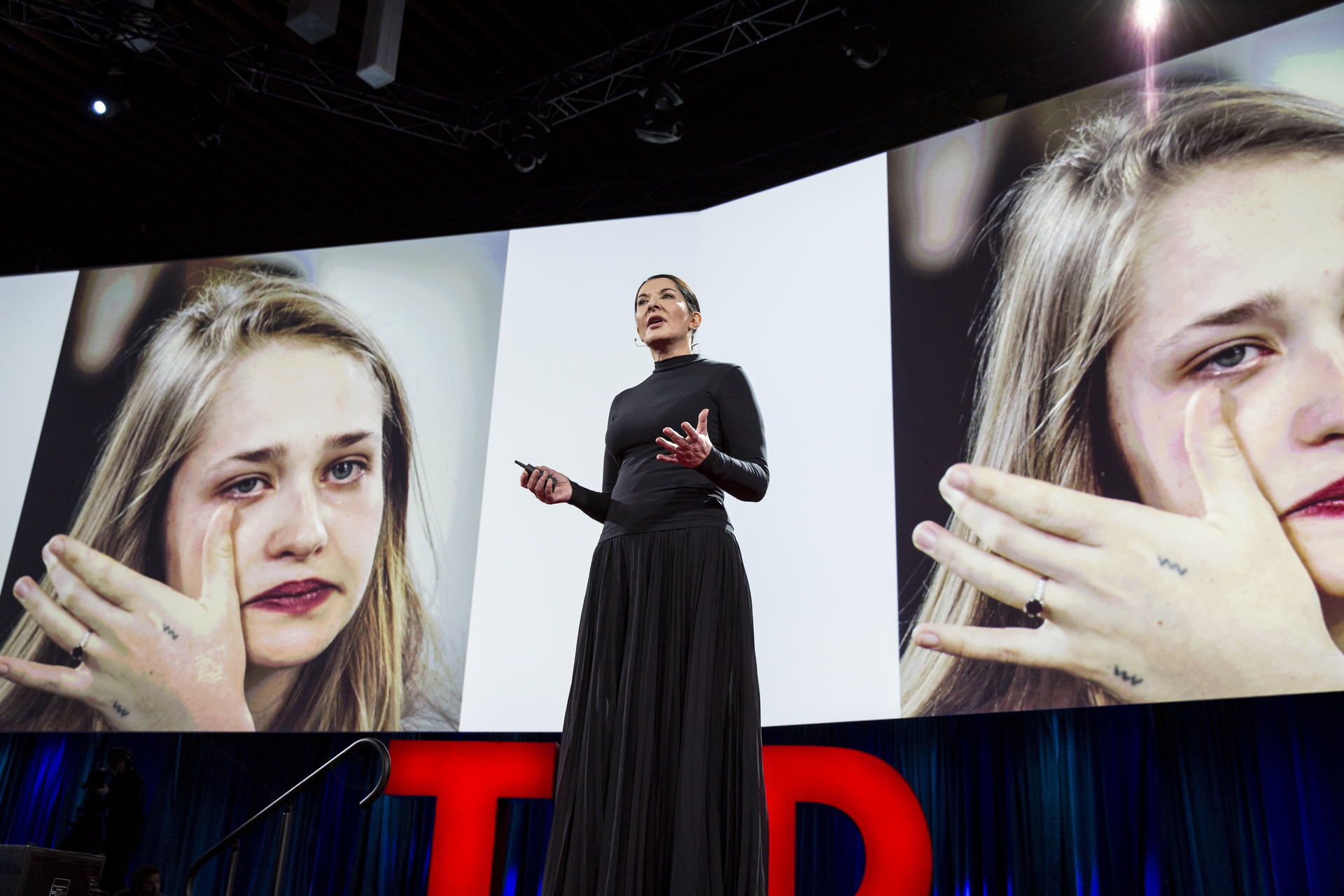 Marina Abramovic dared her audience to look at her — and open their hearts. Photo: Bret Hartman/TED

“It takes courage to uncover the truth,” says Chris Anderson, opening the first session of TED2015, Opening Gambit. “The speakers this week — their courage and brilliance are going to rewire your brain. This dare thing is not just for them — it’s for all of us.” These six speakers set the tone for Truth & Dare:

The mega-challenge of our times. Former Australian Prime Minister Kevin Rudd offers a prediction: Relations between China and the United States will shape the future of the world. In the next decade, he says, China is projected to surpass the US as the world’s largest economy, meaning that for the first time since the rule of King George III in the 18th century, the world’s largest economy will be a non-liberal-democratic, non-Western, non-English-speaking country. He calls this quiet revolution a “mega-change” that is the “biggest since the start of the 21st century.” Drawing on a lifetime of study of Chinese politics and culture, Rudd suggests that China and the US are mismatched in their attitudes toward one another. Are the two superpowers doomed to conflict? No, says Rudd: “We need a framework of constructive realism.” Being realistic about what China and the US disagree on and pragmatic about what they can do together – for example, addressing climate change – is the only way forward.

What fear distracts us from. When he was a kid, foreign policy strategist David Rothkopf remembers crouching with a coat over his head in school, in drills for nuclear war. The difference between then and now? There was actually something to fear then, says Rothkopf. At the time of September 11, 2001, there were only 100 core members of Al Queda, says Rothkopf. And yet “we rearranged our entire national security apparatus in the most sweeping way since the world wars,” he says. “I would argue that fifteen years later, there are more terrorists and more terrorist casualties. The region from which these attacks emanate is more unstable than at any time in history.” Meanwhile, he suggests, we are in the midst of “the fabric of society being rewoven” — thanks to the Internet. And our government, gridlocked and partisan, is simply not having the conversations and debates that need to be had. For example: If a country launches a cyber-attack, how do we deter them? How do you control insurgent groups who have access to intelligence on their smartphones that would once have been classified? Is access to the Internet a human right? If so, what do we do about countries that restrict the web within their borders? “The dialogue isn’t happening [in Washington],” says Rothkopf. And it needs to. Because we’ll ultimately be measured “in our inability to get together scientists, technologists and government leaders to start coming up with, if not the right answers, at least the right questions.” 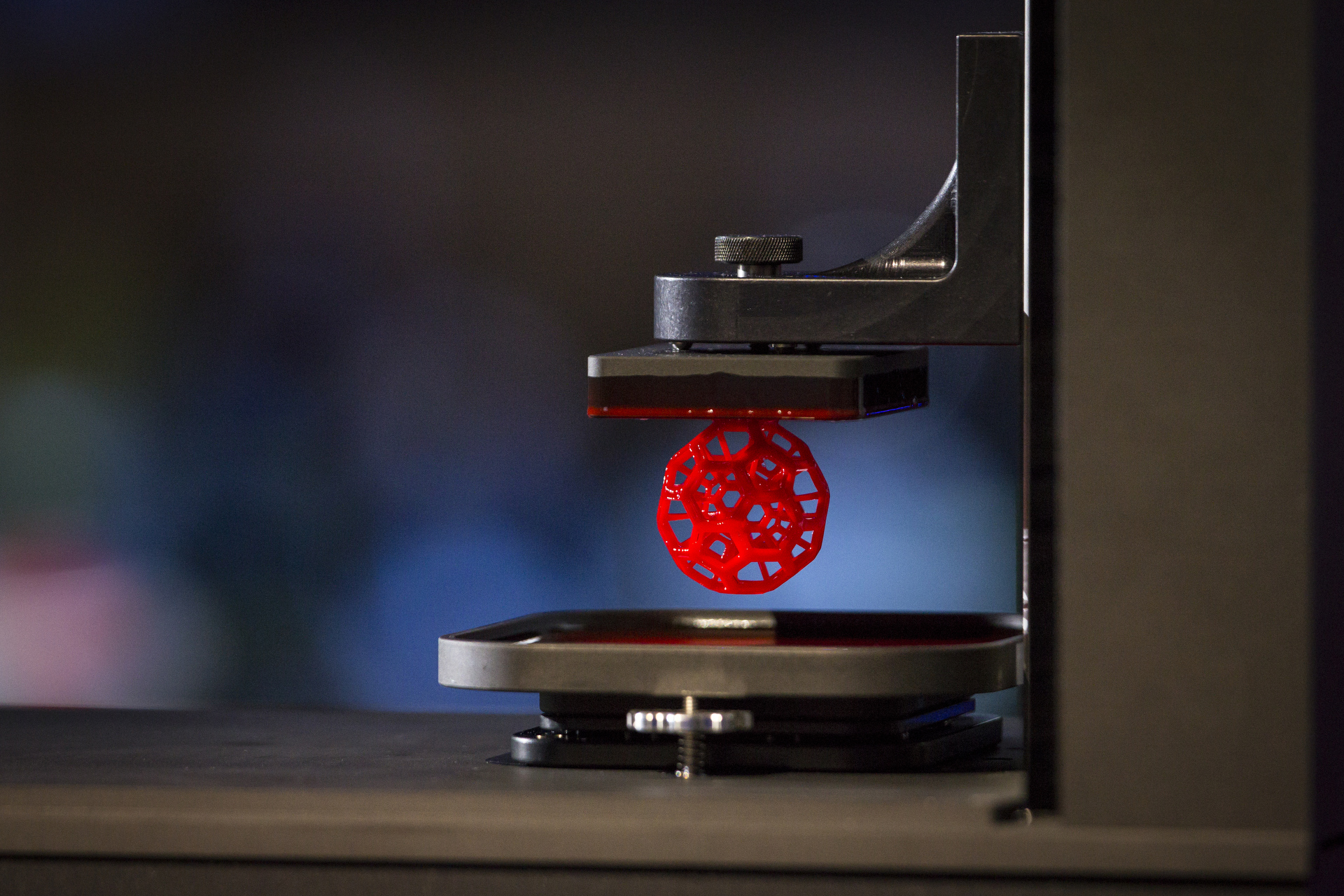 During Joseph DeSimone’s talk at TED2015, this unusual object — impossible to create by traditional manufacturing tools, and a 3- to 10-hour job on a standard 3D printer — was output by the CLIP machine in under 7 minutes. Photo: James Duncan Davidson/TED

A 3D printer inspired by Terminator 2. 3D printing is a misnomer, says chemist Joseph DeSimone, because it’s actually more like 2D printing over and over again. Regular 3D printing is slow and mechanically weak, and the choices of material are far too limited, says DeSimone. “There are mushrooms that grow faster than 3D printed parts,” he jokes. On stage he does a live demo of a new kind of printing technology called “continuous liquid interface production,” which uses light and oxygen to “grow” objects from a liquid, rather than adding layers on top of layers. Working 25 to 100 times faster than other 3D printers, his technology creates a smooth surface finish from biodegradable materials that can be very elastic – all created at a much faster rate than with a traditional printer technology.

Motion microscopes, object microphones. “Something can be perceptually invisible and still be numerically significant.” That’s the idea that guides the work of MIT computer scientist Abe Davis. He starts by showing a “motion microscope,” software that amplifies subtle movements in video too small for the eye to see. Next, he shows how any object can become a microphone, and how a silent video of a bag of chips can reveal — through imperceptible motion — what song is playing in the room. Finally, he shows how that same invisible motion can allow you to predict how an object would move if pushed or pulled. He shows a video of a bush that appears still, and demonstrates how with a click of a mouse he is able to make it bounce up and down. And yes, all of this is hard to wrap your mind around. So consult our full recap of this talk for more.

Reverse DJ with sonic precision. Next, Brooklyn trio Moon Hooch gave TED a lesson in cave music: a deliriously rich collision of jazz and electronic dance music. First, with the drum as a conductor, a thumping, syncopated undercurrent creates a dance club feel. This gave the saxophones, which used innovative extensions to control and muffle their resonance, free rein to play off each other in alternating tempos and complementing rhythms. With suspended builds and drops on the drum and reverberating sax solos, Moon Hooch melded the “sonic precision” of EDM with the spontaneity of jazz. And, through an exhilarating mastery of control and improv, they were, in, their words, a reverse DJ: playing live music to emulate synthesized sound.

Do you trust me? In 1974 Marina Abramović was sitting in a gallery letting total strangers do anything they want to her: touch her, hurt her, even kill her. As the performance artist tells her story, she asks the audience to do something unusual, even daring: To be blind and trust her. Abramović describes to a blindfolded audience the feeling of fear, helplessness and complete vulnerability as she let gallery goers do as they pleased with her body. This mix of risk and trust colored the rest of her career: from a performance in which her lover Ulay pointed an arrow straight at her heart, to their three-month breakup in which they walked toward each other from either end of the Great Wall. It was her 2010 performance, “The Artist Is Present,” at MoMA, that made a major shift in Abramović’s career. Every day for two and a half months she sat across from an empty chair where she invited anyone to sit silently. The pain and suffering she saw on people’s faces inspired her to create the Marina Abramović Institute, an art center where you are required to commit six hours of your time in the service of Marina – to switch off, sleep, sit, stand, and learn to drink water again. “Nothing will happen if you always do things the same way,” says Abramović. In the spirit of personal fear, she concludes her talk by asking every person watching to stare into the eyes of the person next to them for two minutes. To be silent, and to finish a day of truths and dares. 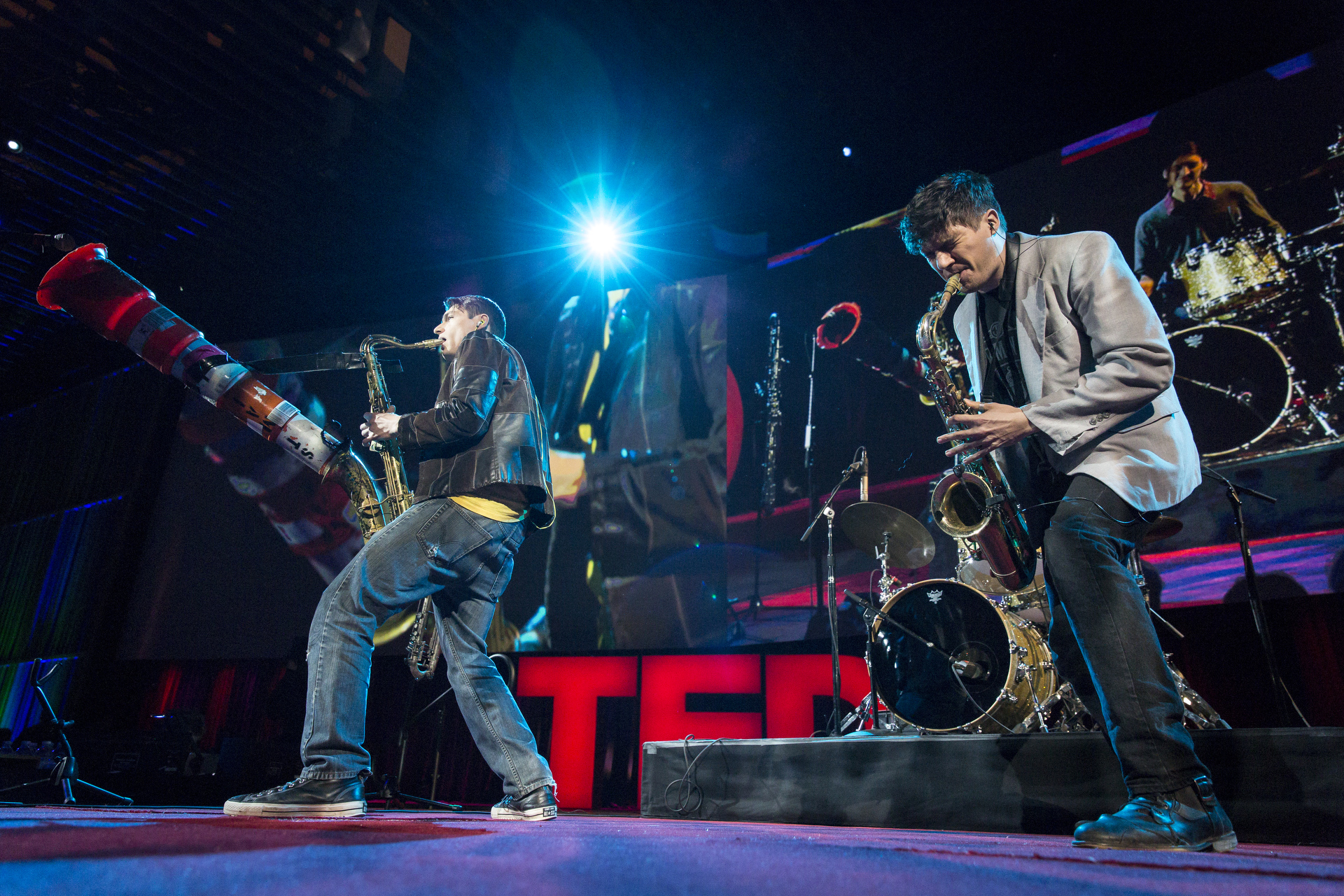