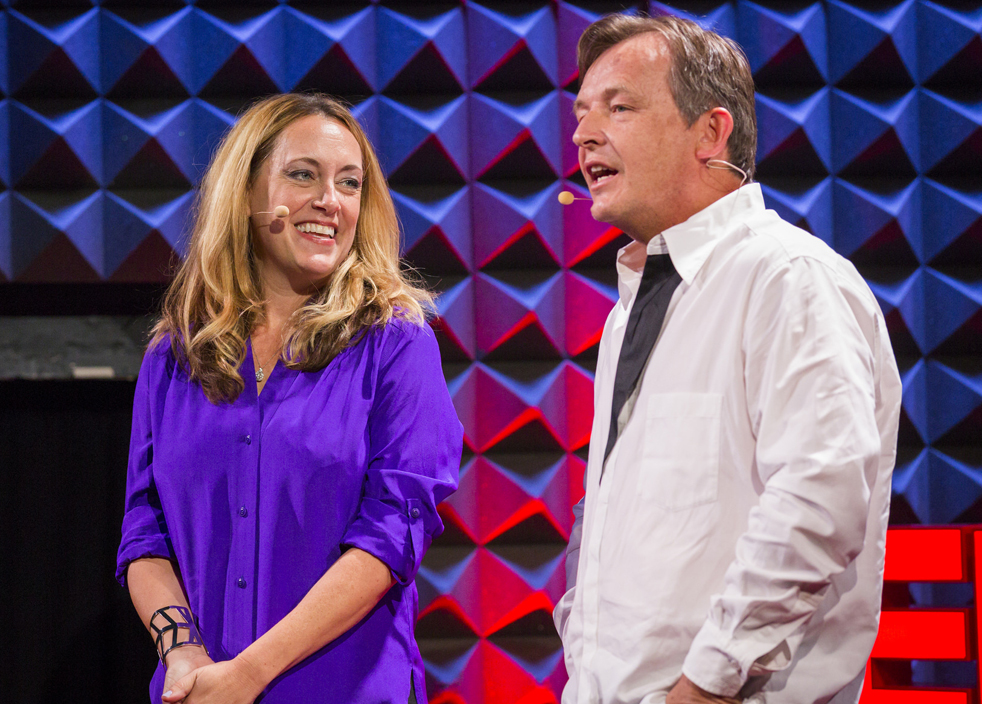 Content director Kelly Stoetzel and curator Chris Anderson have spent more than a year creating the program for TED2015, “Truth and Dare.” Here, they discuss the themes.

At the end of TED2015, curator Chris Anderson and content director Kelly Stoetzel want people to walk away feeling like “they’ve had with their worldview challenged in a productive, satisfying way.”

For this conference, whose theme is “Truth and Dare,” they’ve crafted a speaker lineup that ranges from neuroscientists to machine-learning experts to newly minted activist Monica Lewinsky. A month before TED2015, we sat down with Anderson and Stoetzel to talk about the themes that will run through the conference and the speakers they can’t wait to see onstage.

How did you come up with the theme “Truth and Dare?”

Anderson: Well, we were playing this game… No, how did we come to it? What happens with all themes is: you throw around a bunch of ideas. We’re looking for things that are bold and striking, but not too narrow, because we’ve got to encompass a lot of content. It’s the broadest of broad lenses. We started off with the idea of challenging truths — that there are all these perceived facts out there in the world that don’t seem to be quite right. We thought of TED’s role as going deeper — going behind surface truth, resetting people’s ideas.

Stoetzel: We initially built off the phrase “Ideas worth challenging.” We wanted to include speakers who would argue against perceived wisdom, speakers who have sound, ingenious solutions and speakers who are a bit controversial. We came up a lot of ideas that we loved with that theme, but ultimately we felt that it was limiting.

Anderson: You can imagine, at the end of the day, that being quite an exhausting TED.

Stoetzel: So we started exploring other word combinations. “Truth and Dare” just felt right. To me, ‘truth’ is about people sharing a deep truth that they’ve delved into in their work or research. Then the ‘dare’ part is including people who are right on the edge of something brave: they’re innovating in a smart way; they’re doing something that’s not business as usual; they’re challenging conventional wisdom.

Who are some of the speakers in the program who people might not know yet, but will be totally fascinated by?

Anderson: Certainly Anand Giridharadas, an author who came out with a book last year that is breathtaking. It’s a parable of two Americans, and I think it will be an incredibly powerful talk.

I also spent an hour yesterday talking to Martine Rothblatt, whose story is astounding. She’s founded a couple of companies, including one that saved her daughter’s life. I’m excited that I get to interview her.

Stoetzel: One speaker I think is really interesting is Alan Eustace. He broke Felix Baumgartner’s record for the space jump, but he didn’t have a big PR push behind it, so didn’t have the prominence in the media that Baumgartner did. I think hearing his story of how and why he did that is really great.

I’m also really excited about David Eagleman, a neuroscientist who studies the plasticity of the brain. And about Fei-Fei Li, who is working at the edge of machine learning. She is going to show us some incredible innovation that I think will be mind-blowing.

Session 3 is called “Machines that learn.” How did that emerge as a theme for the conference?

Anderson: It’s probably the most important technological trend at the moment. Most of the new things happening right now that feel like magic — whether it’s self-driving cars or translations suddenly getting much better — there’s machine learning behind it. What’s about to come, I think, is more remarkable still. Machine learning is moving so fast and the implications are both amazing and potentially alarming. One of the speakers we have is Nick Bostrom, who has written a book about superintelligence and its risks — and how we avoid them. The worst risk is artificial intelligence taking over the world, and there are a lot of people genuinely concerned about that. But in the meantime, some of the advances are mind-boggling. We are showcasing those too.

Looking over the lineup, there are many names that people will recognize. Who will give talks that might surprise us?

Anderson: Marina Abramović. I am really captivated by her intensity and charisma, and her ability to use her art to really move people. She demands a big reaction. So we’re definitely excited about that.

Tony Fadell, the creator of the iPod, who has had a huge impact on all of our lives. He’s a strong advocate for integrated design that is both beautiful and intuitive. What he’s done with Nest is remarkable, and hearing his takeaways for how we should think about design for the future is exciting.

Did you have any concerns with inviting her to speak? What made you feel like she was someone people needed to hear from now?

Anderson: Well, it is “Truth and Dare.” For someone in her situation, it does take courage to stand on a public stage. I think she has important insights to share.

Stoetzel: Yeah, this will be only the second time she’s spoken publicly. She calls herself Patient Zero for online bullying. She has a lot to say, as someone who has experienced it for half of her life.

For Session 8, you’re handing over the reins to Pop-Up Magazine. How will that session work?

Anderson: I’m excited by Pop-Up Magazine’s whole format and approach. They’ve got about 12 speakers total, so their session will move very fast. Some of the talks are read, some have images and music. Their show always evokes intense reactions — people get really moved and inspired — so we’re excited to see how people respond at TED. We are very conscious about wanting to innovate around format, so it’s exciting to bring in someone who produces with a different set of eyes.

Session 2 is all about perception. Talk about why you wanted to explore that.

Anderson: I’ve long been obsessed by topics in that area. When you think about “Truth and Dare,” one of the truths that seems most worth challenging is our everyday sense of what the world is. It’s probably completely wrong; it’s likely that we’re wired to be deceived by our senses. If you’re going to challenge truth, why not start with something as fundamental as that? When you dig into it, you see how much of what we see is a model built by our brains — often for purposes other than seeing the world for what it is. So what is the world? Can we know it? David Eagleman and Donald Hoffman, for example, both have very interesting takes.

There’s also a session called “Passion and Consequence.” Passion is always percolating in TED Talks. What made it the focus for a session?

Anderson: That session is on the final evening — the penultimate session of TED2015. By that point of the conference, people have explored a lot of different areas and they’ve sort of opened up. I think it’s a great time to just hear from people who care a lot about something. It’s people in wildly different areas who have that in common, all of whom you’ll end up inspired by.

And the last session, “Endgame,”  is two and a half hours long. Why the super-sizing?

Anderson: We want the conference to feel like it’s got a climax. That final day is often the most special day of TED, and we wanted to dial that up and build a fantastic final session with some of the most inspiring speakers and music. The goal is that all you’ve been thinking about in the previous days is allowed to land, to motivate. That you’re allowed to interpret: what does this mean for me going forward?

Stoetzel: It’s interesting for us to have a session that does have more speakers in it. We get to think about how that works as a narrative.

Anderson: And I should also say that there will be a short break in the middle. It’s an experiment, one I’m excited by. I think it’s the right way to do the final session.

At the end of the program, what do you hope the audience will walk away feeling?

Anderson: I’d like to think that people will feel like they’ve had their worldview challenged in a productive, satisfying way. That they’ve got a new lens on an array of topics, and that they feel inspired to go out and be bold.

Stoetzel: Yes! That they can go out and do better than they had before.

What surprised you most in the curation process this year?

Stoetzel: I’m always surprised by how the program feels like a living, breathing thing. Last Thursday, we reorganized the program a bit and it was an exciting day for us, because just moving speakers around, it emerged with a new vigor. That’s always interesting to see.

Anderson: Every year, I get a little more awed at the amount of effort speakers are willing to put into this. They engage so deeply. People spend a great deal of time crafting something remarkable for TED. It’s a huge honor to be on the receiving end of that.

Did the curation process reveal anything to you about where we are in the world right now?

Anderson: I’m feeling more optimistic than I was at the start of 2014. The pace of innovation right now is exhilarating. There’s no shortage of scary things — and many will be covered in the conference — but it feels to me like there are really exciting ideas and technologies coming in that are going to make a difference. There are even counter-narratives to our perception of systemic dysfunction in the world. One example is the heroic global response to Ebola. The fact that, all things considered, Ebola appears to have been brought under control is incredible; there’s a parallel universe out there where millions of people got wiped out in the most horrifying way. When you actually look for a minute, there are lots of instances this year of humanity acting quite thoughtfully and collaboratively to tackle big things. That gives me hope.

TED2015 is sold out. But you can still join us for TEDActive 2015, an action-packed simulcast event that runs parallel to the annual conference. You can also enjoy the live TED experience from your home, office or classroom via TED Live. And of course, we’ll be covering the conference live on the TED Blog, and sharing select talks from TED2015 throughout the year on TED.com. Stay tuned. 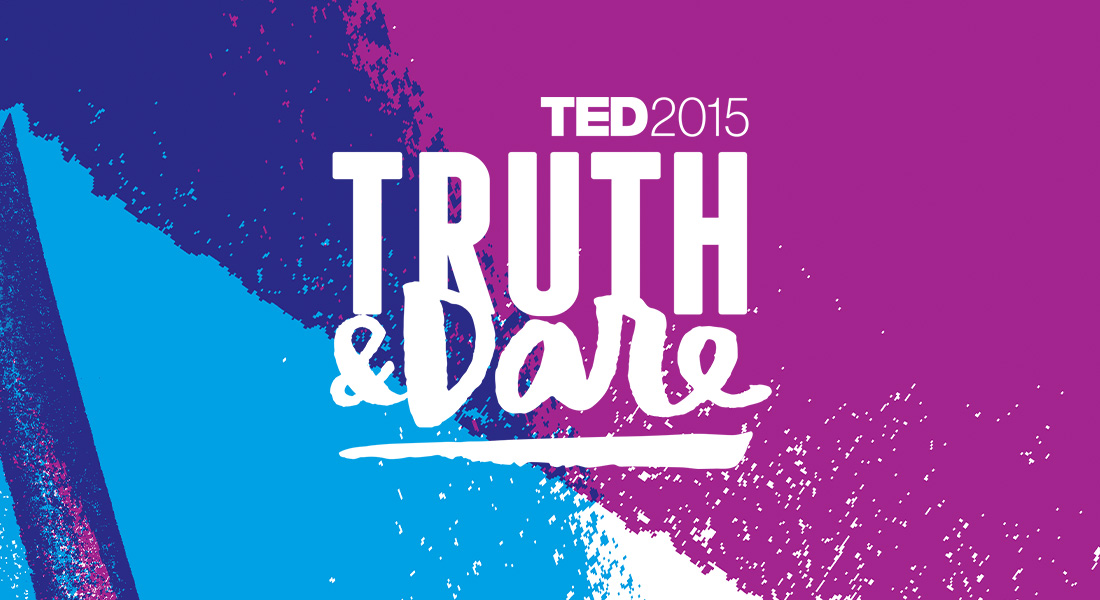