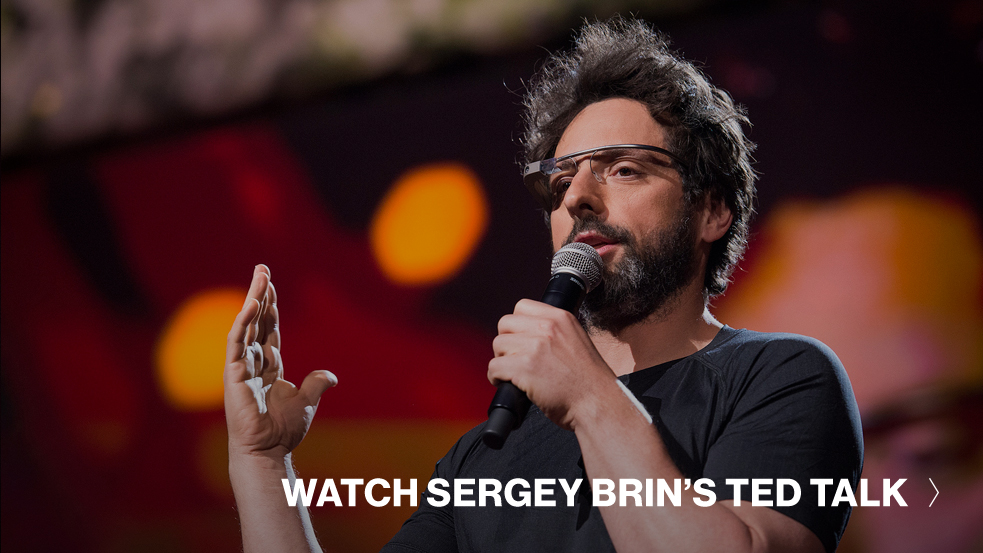 In his TED talk, Sergey Brin of Google shares the idea that motivated the development of Google Glass: that while smartphones inherently take us away from experiencing the real world, a device could allow for a digitally-mediated experience within it. “This position you just saw me in – looking down at my phone – that’s one of the reasons behind this project, Project Glass,” he says, hunching over his phone. “We ultimately question if this is the ultimate future of how you want to connect to other people in your life, how you want to connect to information. Should it be by walking around looking down? Is this what you were meant to do with your body?”

Yesterday, Google announced that it was stopping the Google Glass Explorer Program, which let curious software developers buy a pair for $1,500. Many interpreted this as the company rolling back on this vision, but Google assured that they were doing it to focus on “future versions of Glass.” They said that Google Glass was “graduating from Google[x] labs” to become its own team at Google. “We’re thrilled to be moving even more from concept to reality,” the company’s blog post stated.

TED’s media team was invited to the Explorer Program after a team member attended Google I/O in 2013. So several people in the TED office took Google Glass for an early test drive. Here is what they had to say at the time: Several members of the TED staff try on Google Glass. Michael Glass (top left) and Isaac Wayton (bottom right), who road tested it the longest, give their impressions of the new device.

Michael Glass, then our Director of Film + Video, had this to say after test-driving the new device.

“Whatever its oddities and awkwardnesses, this is the first step in getting to that HUD Terminator experience that captured so many imaginations 30 years ago. If we had given up on the cell phone because its first users looked like schmucks holding up big grey bricks to their ears, we would never have met the iPhone or Nexus 4 or Droid DNA or Galaxy S4 or whatever your dream phone is,” he said. “The bit that blows my mind is its integration with Google Hangouts although to be honest it’s not been particularly useful in any specific way. Then again, neither was E=MC2. It’s mostly a toy right now, which is all the more reason to play with it. I think Google is smart to be humble and not cram the thing full of tools and functions — the crowd will figure out the most interesting ways to use it; they just needed to make the first leap into the hardware.”

His biggest complaint: “My last name is Glass and I walk around saying, ‘Okay Glass’ to activate the main menu.”

“I really like the idea of Glass, in theory, but I’m worried that it’s a technology that will promote selfish user behaviors rather than real life human interactions. Also, since I need to wear prescription glasses — and couldn’t wear both Glass and my pair at the same time — I wasn’t able to see the tiny, projected screen very well,” he says. “That said, it is an amazing piece of technology and it deserves further development because I am sure that people will also find intelligent uses for Glass to help people in the real world.”

The bottom line: he looks forward to a version that somehow attaches to existing glasses.

And TED’s Product Development Director Thaniya Keereepart had this to say: “One thing that’s been exceptionally interesting for me about Glass is the user interface. We’ve become accustomed to using our hands to ‘touch’ a device in order to control it — it’s evolved from a keyboard to a mouse to a touchpad. With Glass, you have a very different UI constraint to how information is controlled and revealed. That Star Trek future where we speak to a computer that Hollywood had been dreaming of for decades has arrived, and I think it’s here to stay. On photos and videos — I think people over time will come to value first-person recording more and more. Filming babies and children seem to be one of the more popular things to do via Glass for a reason — it’s personal. It’s the memory recorded exactly how you see it. Removing the barrier between your eyes, a recording device, and the subject, makes the filming experience much more about you and your child.”

She sums it up saying, “I agree with Michael that this device is merely the first step in the evolution of smart wearable computers. Its purpose and value, in my opinion, is to trigger our imagination and creativity.”

Where Google Glass will go from here, no one knows. But here is a TEDYouth talk that shows where it started. In it, Tom Chi – who was on the team that developed Glass – shares how the invention was rapid prototyped in a single day. He tells how team members solved problems and eliminated dud ideas by mocking up the design using clay, paper, modeling wire, binder clips, hairbands and chopsticks.

This piece originally ran on May 17, 2013. It was updated on January 17, 2015, when Google announced it was halting the Glass Explorer Program.