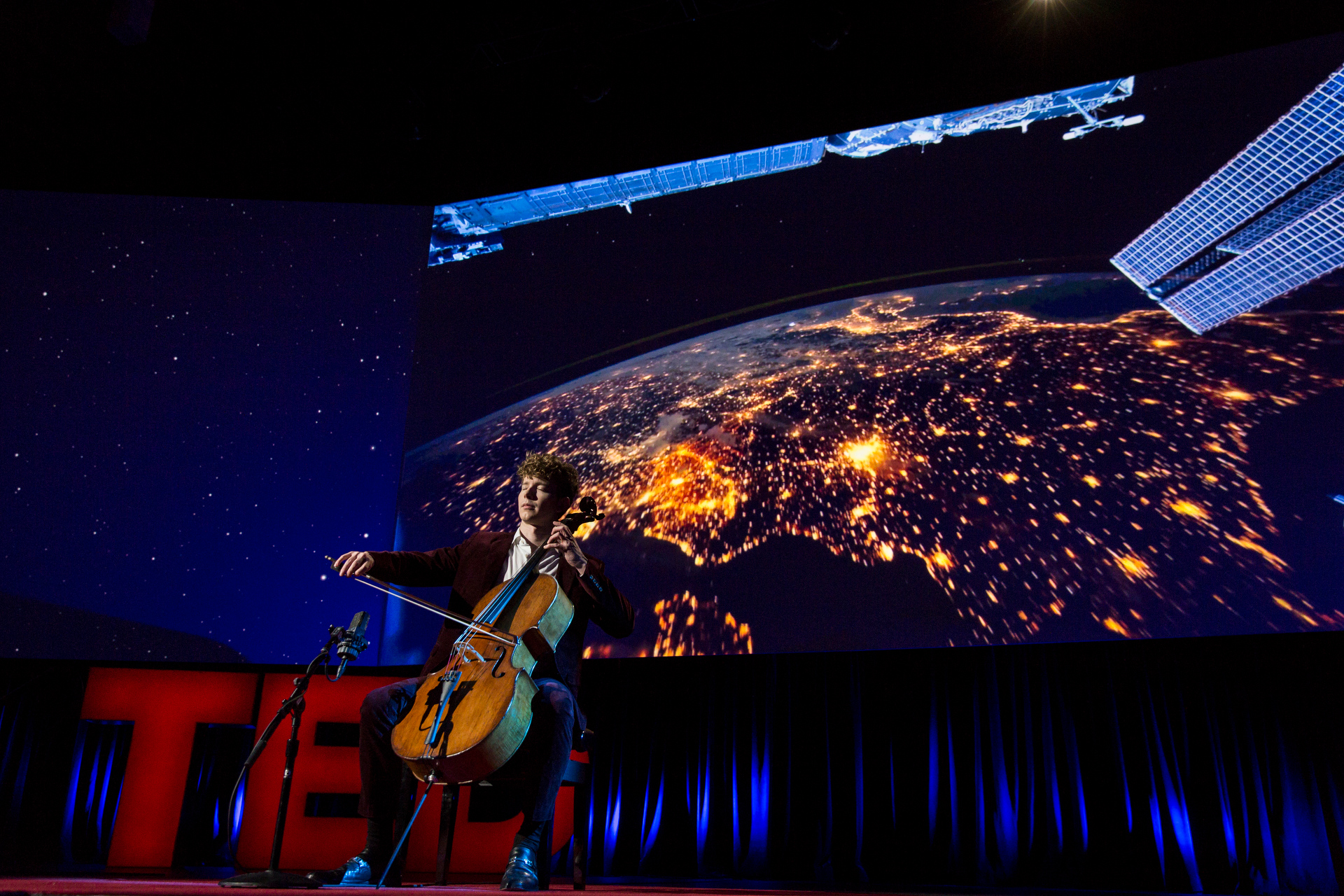 “When our ancestors looked up at the night sky, they saw tools for navigation. They saw myths, and they saw the heavens,” says June Cohen, the host of Session 4 of TED2015. “But technology has given us so many new clues. … Space exploration has never been as fascinating and relevant as it is today.”

Here’s a recap of the talks in this session:

Bach in the dark. The music of cellist Joshua Roman fills the darkened theater at the start of the session. The TED Senior Fellow plays the prelude to Bach’s cello suite No. 1 in G Major, and as the tempo picks up we see a gorgeous blue orb against the screen behind Roman. It’s Earth. Time-lapse footage from the International Space Station shows our planet’s bright lights shining against its dark blue oceans. White clouds whiz by, and Roman’s four minutes come to a close.

Stratospheric leaps. Explorer Alan Eustace shows us the the custom 400-pound spacesuit that kept him alive during his historic skydive in 2014. What’s it like to strap yourself to a weather balloon, rise to the edge of space — and then plummet to the ground so quickly that you break the sound barrier with your body? “The trip up is beautiful. It’s kind of like Google Earth in reverse,” he says. The big challenge is making sure that every component works as planned on the way down. For a knowledge-seeker like Eustace, the experience was an engineer’s dream come true. Will his record-setting leap launch a new era in commercial space flight? The sky is limitless.

A probing quest. Rosetta Mission manager Fred Jansen escorts us into the heavens and onto a comet. Late last year he was responsible for the successful landing of the probe Philae from the Rosetta spacecraft onto the comet known as 67P/Churyumov-Gerasimenko – the first ever landing on a comet. Nearby comets are unique, says Jansen, for three reasons: They contain original material from which our solar system was formed; they’re ideal to study the components that were present when our planets formed; and they may even contain elements responsible for bootstrapping life on Earth. The challenges of landing Philae on the comet were myriad. Consider, for example, the fact that the landing duration was seven hours long – that meant that if Jansen’s team was off by even 1 centimeter per second, they’d be 252 meters off – and their margin of error was only 500 meters. Philae of course did land, and the team was able to gather information about dozens of gasses and organic compounds. Now Jansen is just waiting: “We listen every day and hope that one day the lander will wake up again.”

Is there another Earth? The search for alien life is not about “little green humanoids arriving in shiny UFOs,” says Sara Seager. It’s about the “search for planets orbiting stars far, far away.” The earth is, simply, a planet orbiting a star — and our sun is one of hundreds of billions of stars out there. In fact, the Milky Way is one of hundreds of billions of galaxies. Small planets around distant stars — aka exoplanets — are very common. “It seems inevitable to me that life is out there somewhere,” she says. The challenge is finding a “goldilocks planet.“ As she explains, “What we want to do is find a planet that is not too big, not too small, not too hot and not too cold.” To hear more about how scientists are searching for this planet, and about the ones discovered so far that definitely aren’t it, check out our full recap >> 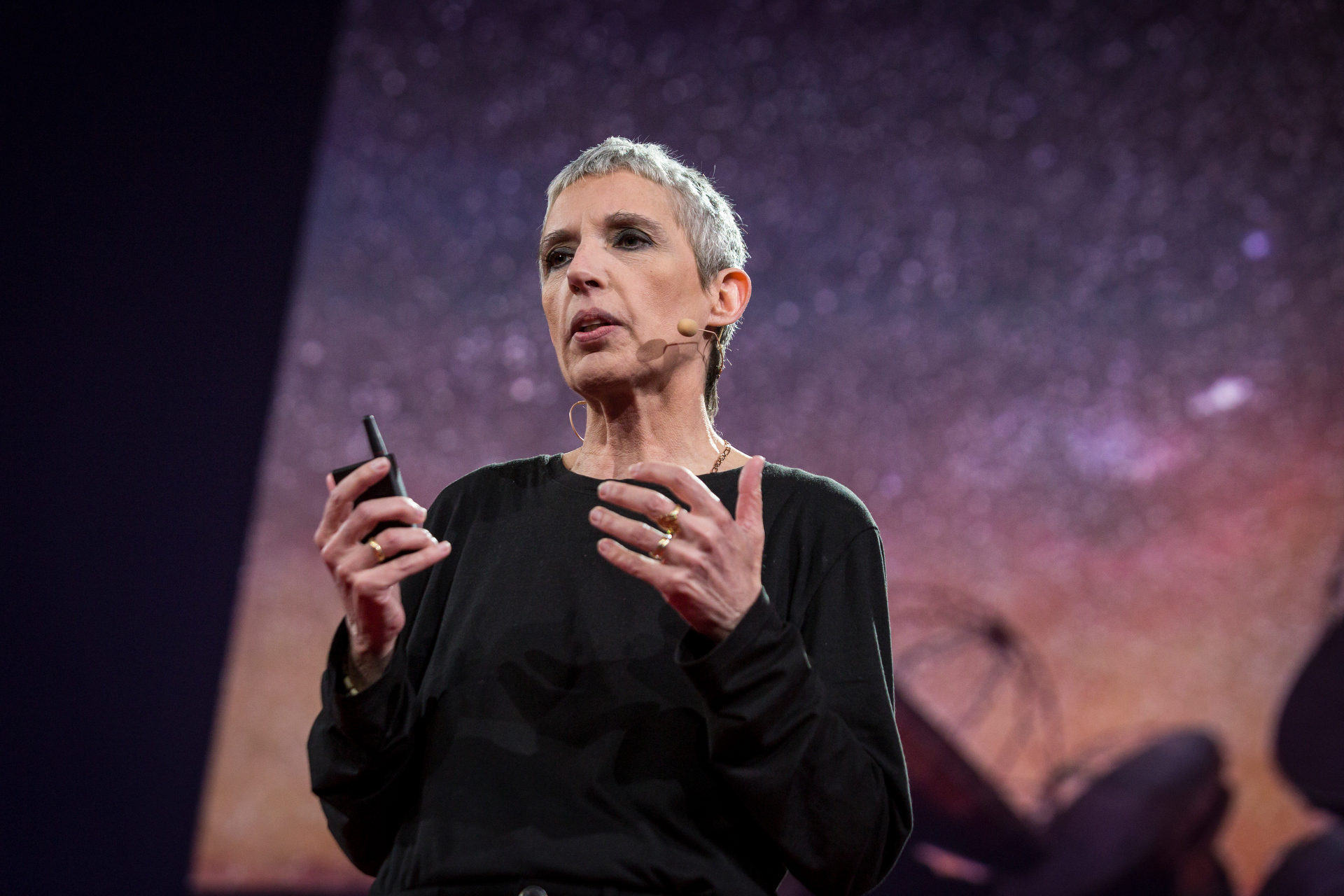 Nathalie Cabrol treks to the most extreme environments on Earth to imagine life on Mars. Photo: Bret Hartman/TED

Conversations with microbes. Planetary explorer Nathalie Cabrol delves into some of the biggest questions of the universe: How did Earth come to have life? Are we alone in the universe? And how soon can we find out? To learn the answers to these questions, she explores extreme biology and environmental conditions on Earth that have recently been found teeming with microbial life. Now that scientists have found life thriving in extreme conditions on Earth, there has been a revolution in our understanding of what a habitable planet is. This revolutionary idea has led to new questions — and the idea that life on other planets is likely. “We are the only advanced life form in the solar system, but that does not mean there is no microbial life nearby,” says Cabrol. The Red Planet is one strong possibility in the planetary neighborhood, since it shares our geological heritage. “Mars and Earth threw rocks at each other for a very long time,” she notes. To find out more about the origins of life on either planet, she will continue to explore high-elevation extreme environments on Earth. She’s optimistic about what we’ll find off Earth in the relatively near future. “There is no life possible at the surface of Mars today, but it might still be hiding underground.”

How we’ll live on Mars. By 2027, technology forecaster Stephen Petranek predicts that humans will be colonizing Mars. That’s two years later than Elon Musk has predicted – but Petranek is just, um, being realistic. To his mind, not only is Mars colonization a reasonable next step for humans, it’s completely plausible. Says Petranek, staying on Earth is risky – we can be wiped out by an asteroid at any time. “To survive,” he says, “we have to reach beyond the home planet.” Though it’s very cold (about -81 degrees Fahrenheit) and hard to breathe (the air is 96 percent carbon dioxide), Mars is “by far the most livable other place in our solar system.” Says Petranek, “It sounds like a lot of hubris, but the truth is a lot of the technology is already available.” He outlines technologies NASA’s already developed that will help us eat, breathe, clothe ourselves and build houses on Mars. He even gives his plan for terraforming the entire planet. So what will life on Mars be like once we’ve acclimated? Pretty much like it is on Earth: Someone will build a bar, and someone will make a reality show. He says with almost monotone reslish: “Strap yourselves in. We’re going to Mars!” 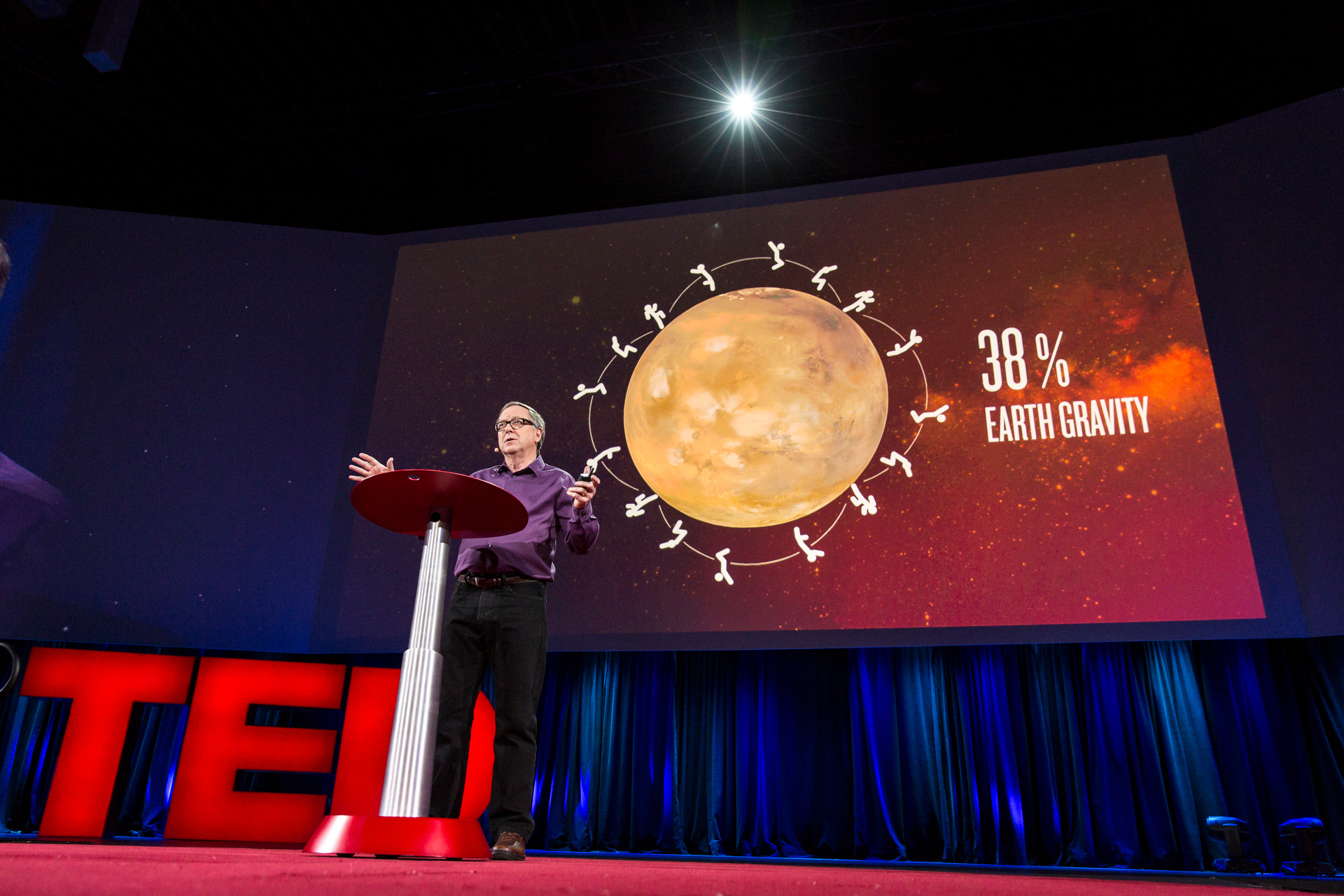