This morning’s Session 4 explored the ways we connect — the pathways our money takes, our communication, our trust, even our intelligence(s). Read on:

Trust in your neighbor, but maybe not in your bank. Why is it that, despite being told “don’t get into a car with a stranger” for as long as we can remember, five million of us opt to do this every day when we call an Uber? Rachel Botsman believes the popularity of these services, including Uber, AirBnB and the like, represents a fundamental shift in our societies away from an institutional model of trust and towards a distributive model. In recent history, a handful of major events have severely weakened the public’s trust in our banks, our government and even the church. As this form of institutional trust collapses, we have witnesses a simultaneous rise in what’s known as the “sharing economy.” This new bottom-up model for trust is empowered by technology, including systems like the blockchain, which may someday remove the need for third-party trust systems entirely. As trust becomes more and more local and accountability-based, technology will continue to shift power away from these economic institutions and distribute itself into the hands of all of us. 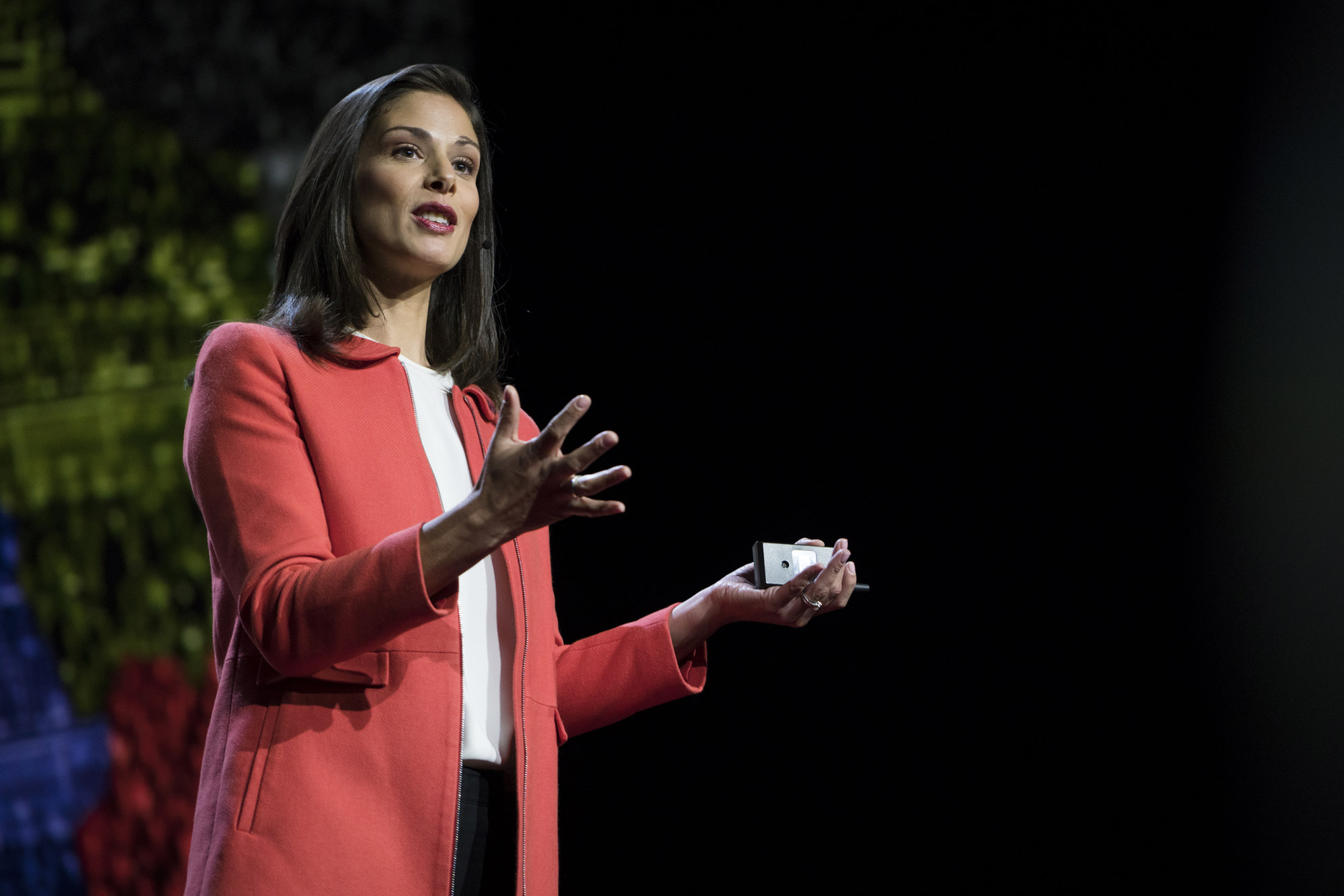 Benedict Android: how your phone can be hacked to betray you. The good news about smartphone surveillance is really good: In the past few years, many ordinary citizens have been able to capture shocking and irrefutable evidence of violent civil-rights abuses by police, soldiers and others, starting huge and important conversations. But the bad news is also really bad. Apple may have made news by refusing to bend or break the high-security encryption on its iPhones even for a FBI terrorism investigation. However, as the noted surveillance researcher Christopher Soghoian explains, Apple is the exception, and its products are affordable only to an upper-income tier of the world’s population. The security encryptions on most smartphones — the Android-style phones used by most of the world —  are far easier to hack by law enforcement or government officials, putting Android users at a much greater risk for having their phones (and the contents of them)) used against them. Soghoian calls this problem “the digital security divide,” and, having extensively studied how governments use malware and other underhanded surveillance measures to hack into computers and smartphones, he offers a very compelling case that, whatever new cool apps, trendy games and photo filters are in the pipeline for the next generation of smartphones, Apple-strength security measures are desperately needed first. “If the only people who can protect themselves from the gaze of the government are the elite, that’s a problem,” says Soghoian. “It’s not a technology problem — it’s a civil rights problem.” 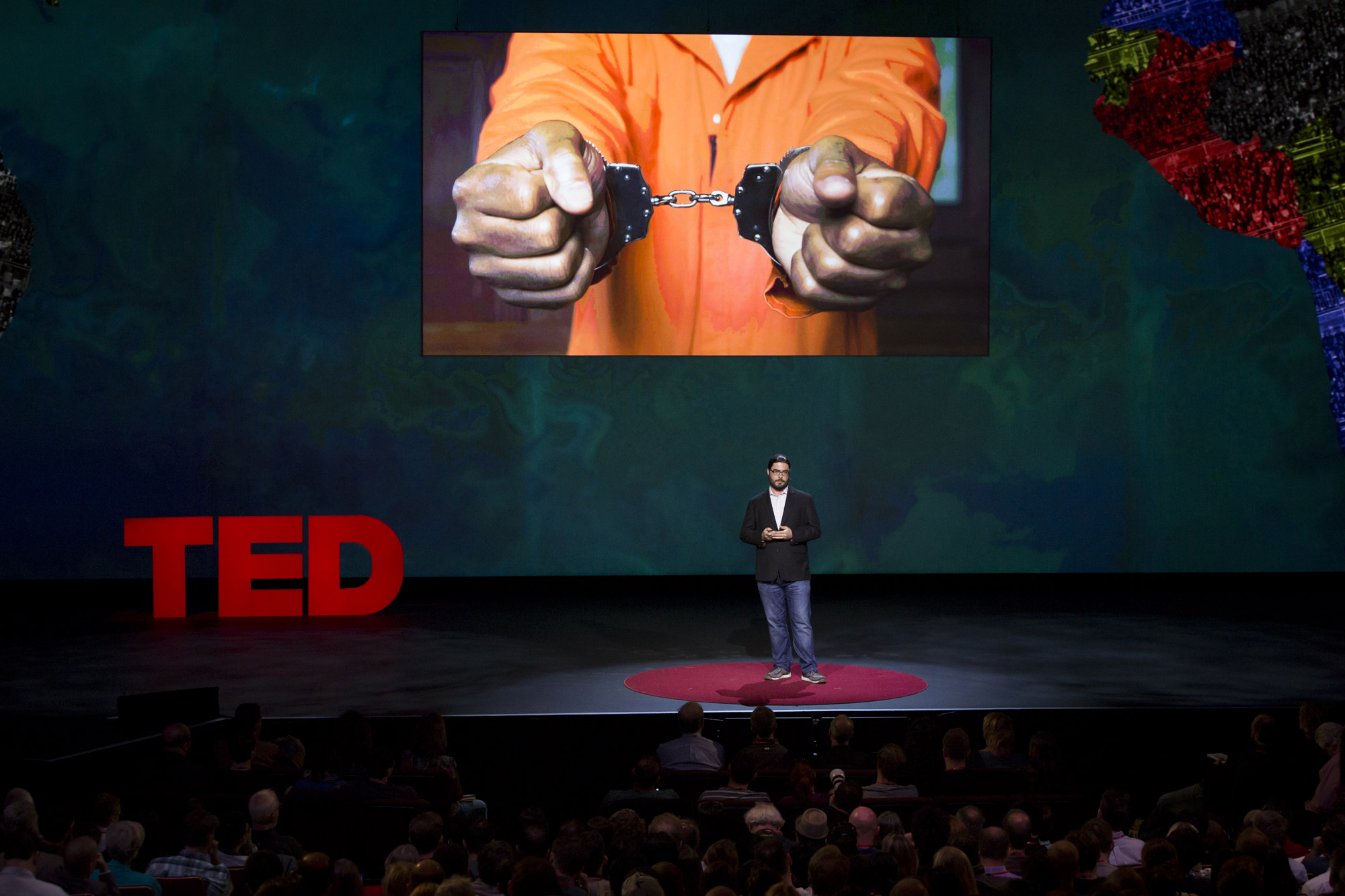 Christopher Soghoian advocates for encryption on all our smartphones — not just Apple products. Photo by Marla Aufmuth/TED.

The awe of the puzzle. The Rubik’s cube is one of the most recognizable puzzles the world over, but as techno-illusionist Marco Tempest points out, it’s still as challenging today as when it first appeared in the 1970s. As he handed audience members cubes to jumble up, he explained their tugging pull: “Puzzles are mysteries that promise a solution, we just have to find it.” He then collected the cubes and brought an audience member onstage, where she challenged him to solve a cube — which he did in under 10 seconds. Holding up another cube, she showed him each of its six sides and he, almost effortlessly, matched a separate cube to reflect its same disorder. Without blinking, Tempest arranged the cubes into a square sculpture, while illustrating the universal appeal of the puzzle, “The Rubik’s cube is not an easy puzzle, but its design is elegant and it taps into that universal desire to solve problems, to bring meaning from chaos. It’s one of the traits that makes us human and has taken us to where we are now.” 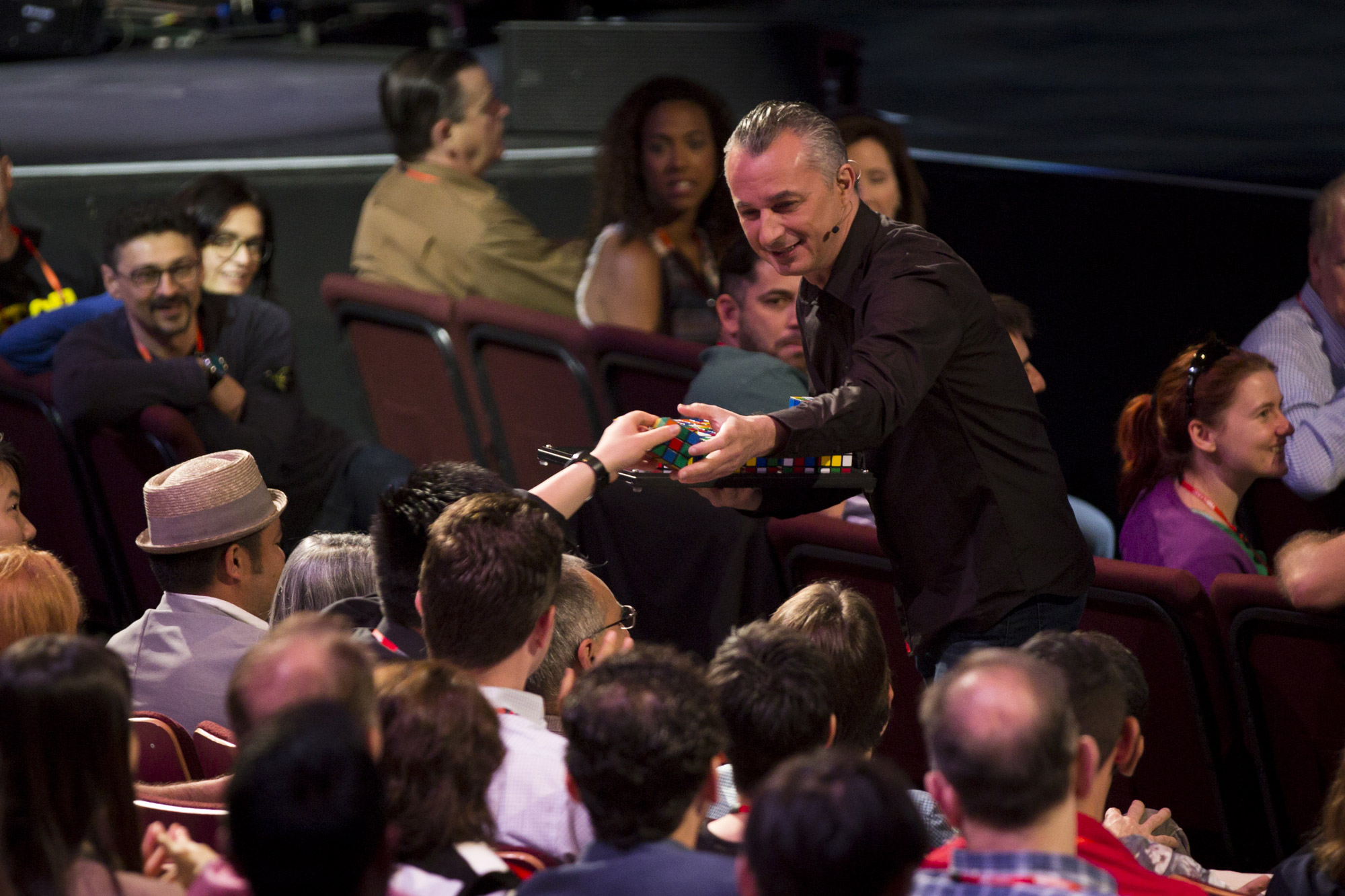 Techno-illusionist Marco Tempest hands out Rubik’s cubes, inviting the audience to scramble them up. Photo by Marla Aufmuth/TED.

Censorship and the fight against terror. If there is one thing Rebecca MacKinnon believes, it’s that the fight against terrorism cannot be won without the strict preservation of human rights. Human rights, in her opinion, along with freedom of the press and an open internet, are integral tools to stop the spread of radical extremist ideologies in democratic societies. Yet, the unfortunate reality is that the people on the forefront of exercising these liberties, such as independent journalists and bloggers, are often persecuted by the same government forces as the extremists. This persecution can take the form of actual jail time, as it has in Morocco, Turkey and Saudi Arabia, but may also occur in less direct ways. In the US, Washington DC and Silicon Valley have teamed up to stop the spread of ISIS’s online communities. However, their censorship has inadvertently silenced the voices of some who simply happen to share a name with a suspected terrorist or terrorist group, like the scores of women named Isis who have found their Twitter accounts deleted. As democratic governments across the world continue to crack down on whistleblowers and dissenters, 2015 marked the 10th consecutive year that freedom had been on a decline worldwide. This is why MacKinnon believes we need to fight for transparency and accountability from our governments and for the right to encryption for all citizens. She believes that privacy is essential to the survival of investigative journalism and public discourse, thus we must make choices to reflect our support lest we stifle the very people on the frontline of the fight against extremism.

The inevitable tendencies of artificial intelligence. “The actual path of a raindrop as it goes down the valley is unpredictable, but the general direction is inevitable,” says digital visionary Kevin Kelly, and technology is much the same, driven by patterns that may surprise us but that are driven by inevitable tendencies. One tendency in particular stands out because it will have a profound impact on the next 20 years: our tendency to make things smarter and smarter — the process of cognification — that we identify as artificial intelligence. Kelly explores three trends of AI that we need to understand in order to embrace it, because it’s only by embracing artificial intelligence that we can steer it. But the big takeaway? We’re in very, very beginning of artificial intelligence. “The most popular AI product 20 years from now that everyone uses has not been invented yet — that means that you’re not late.”

Scientific proof that trees talk. Forest ecologist Suzanne Simard researches the quiet and cohesive ways of the woods. In her research, she’s discovered monumental evidence that will change the way you look at these stoic plants — because trees, like humans and most living things, communicate and develop communities.  Using their roots to deliver information, forests and similar collections of trees build a resilient, self-healing family; there are even “mother” trees who look after seedlings and share wisdom when injured or dying. As Simard says: “A forest is much more than what you see.” Read more about Suzanne Simard’s talk.

I am a Brit. Two days ago, Alexander Betts agreed to give a talk here at TEDSummit on an issue close to his heart: how Brexit happened, and what it means for his home country and his global vision. In a powerful talk, he asks why the UK seemed to split apart on June 24 … and whether or not this should have come (as it did to many) as a shock. Read more about Alexander Betts’ talk.