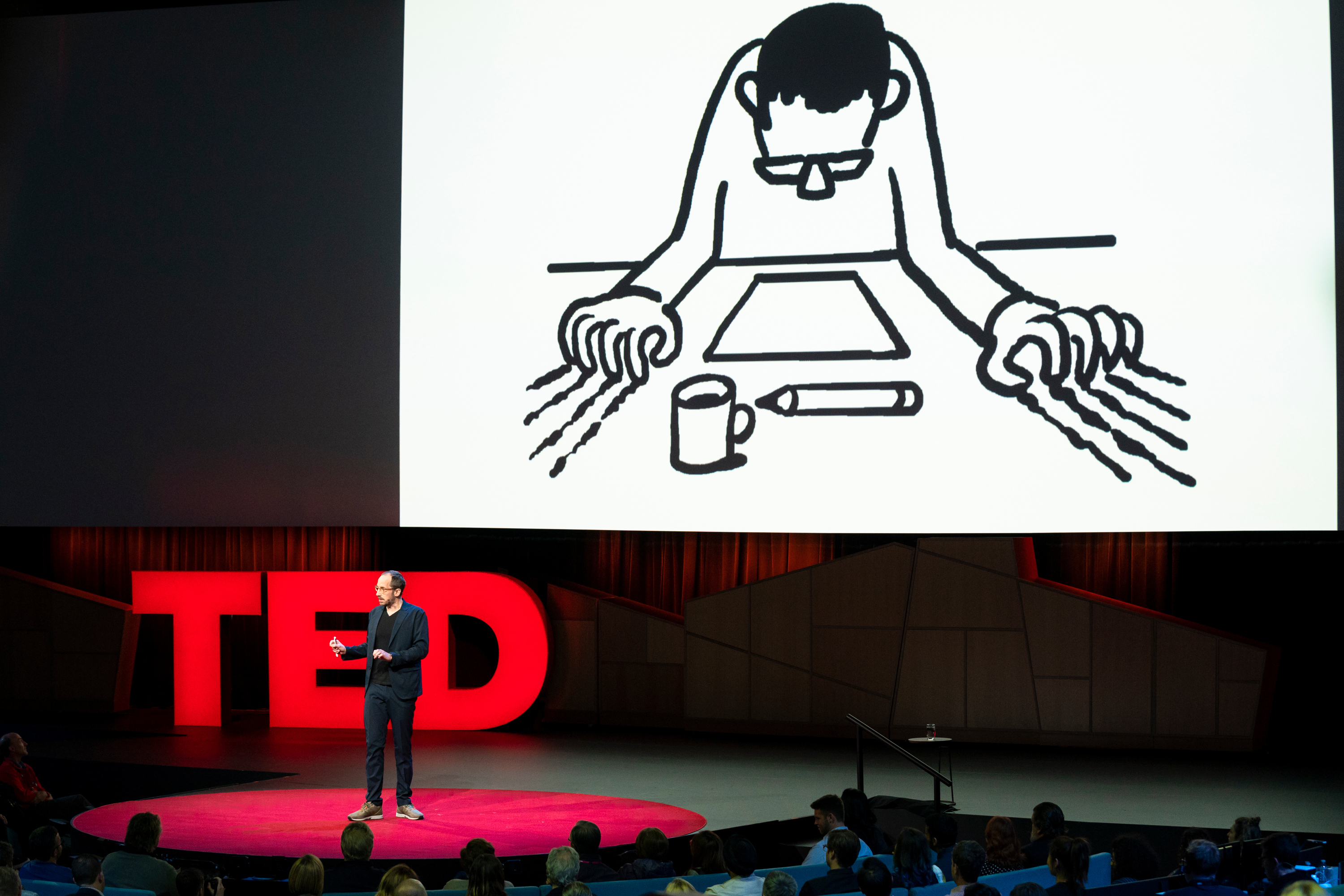 What does an illustrator’s life look like? Well, says Christoph Niemann, most of the time: this. He spoke at TED2018 on April 13, 2018, in Vancouver. Photo: Jason Redmond / TED

​Sketches that speak volumes. When illustrator Christoph Niemann wakes up after falling asleep on an airplane, he says, “I have the most terrible taste in my mouth that cannot be described with words … But it can be drawn.” Then he shows a spot-on sketch of an outstretched tongue with a dead-fish-rat-hybrid creature on it. Trying to recap his intensely visual talk in words resembles his struggle, because this talk speaks largely through witty, whimsical drawings. Niemann believes all people are bilingual, “fluent in the language of reading images,” and most of our fluency comes organically. For example, while you might remember learning to read the words “men” and “women,” can you recall anyone explaining to you what the symbols on the doors of the bathroom meant? You just figured it out. People share a rich and common visual vocabulary, so Niemann likes to take “images from remote cultural areas and bring them together” — hence his putting the words “ceci n’est pas une pipe” in cursive above white iPhone earbuds. Using this collective lexicon, Niemann and other artists can communicate information, satirize people and ideas, express empathy, and make us laugh — all without words. In that way, he says, as deft as his drawings are, they’d be nothing without an audience. He says, “The real magic happens in the mind of the viewer.”

“Once your appliances can talk, who else will they talk to?” Gizmodo writers Kashmir Hill and Surya Mattu survey the world of “smart devices” — the gadgets that “sit in the middle of our home with a microphone on, constantly listening,” and gathering data — to discover just what they’re up to. To do this, Kashmir turned her San Francisco apartment into a full-fledged smart home, loading up on 18 different internet-connected appliances — including a “smart bed” that calculated her nightly “sleep score” to let her know if she was well-rested or not. Her colleague Surya built a special router to figure out how often the devices connected, who they were transmitting to, what they were transmitting — and what of that data could be sold. The results were surprising — and a little creepy. By poring over Kashmir’s family’s data, Surya could decipher their sleep schedules, TV binges,  tooth-brushing habits. And while many appliances connected only for updates, the Amazon Echo connected shockingly often — every three minutes. All of this data can tell companies how rich or poor you are, whether or not you’re an insurance risk, and — perhaps worst of all — the state of your sex life. (A digital vibrator company was caught “data-mining their customers’ orgasms.”) All this may lead you to ask, as Surya does, “Who is the true beneficiary of your smart home? You, or the company mining you?”

Embrace the diversity within. Rebeca Hwang has spent a lifetime juggling identities (Korean heritage, Argentinian upbringing, educated in the United States), and for a long time she had difficulty finding a place in the world to call home. Instead, one day, she had a pivotal realization: it was fruitless to search for total commonality with the people around her. Instead, she decided, she would embrace all the possible versions of herself — and the superpower it grants her to make connections with all kinds of people. Through thoughtful reinvention of her personhood, Hwang rid herself of constant anxiety, by “cultivating diversity within me and not just around me.” In the wake of her personal revolution, she’s continued to live a multifaceted life and accept the endless advantages it brings. She hopes to raise her children, who are already growing up with a unique combination of backgrounds, to help create a world where identities are used not to alienate others but to bring people together.

Life after loss. Jason Rosenthal’s journey of loss and grief began when his wife, Amy Krouse-Rosenthal (a best-selling children’s book author), wrote about their lives in a New York Times article read by millions of people. “You May Want to Marry My Husband” was a meditation on dying, disguised as a personal ad for her soon-to-be-solitary spouse. By writing their story, Amy made Jason’s grief public, and gave him an empty page on which he could inscribe the rest of his life. For Jason, “The key to my being able to persevere is Amy’s express and very public edict that I must go on.” But grief carries memories, especially of the process of dying itself. Amy chose home hospice, which gave her  happiness — but Jason is honest about the complications it caused for the survivors, including the inevitable, indelible memory of when Jason carried a lifeless Amy “down our stairs, through our living and our dining room, to a waiting gurney to have her body cremated.” Jason’s salvation lay in Amy’s challenge to begin anew, which he shares with others who may be grieving: “I would like to offer you what I was given: a blank sheet of paper. What will you do with your intentional empty space, with your fresh start?”

An emotional reset. Many of us in the audience knew Amy Krouse Rosenthal, who had a key role in planning our TED Active conference; session co-host Juliet Blake asks for the house lights to dim for a moment to create some space for quiet reflection. Then the extraordinary violinist Lili Haydn steps onstage for a welcome musical interlude. Unaccompanied by a band, she performs an emotional and elegant piece of her original musical, called “The Last Serenade.”

Can we help every employee be GRACED? Over the years, poet and trainer Tamekia MizLadi Smith has met her share of Ms. Margarets — the longtime front-desk employee at a medical office who knows her job perfectly well and doesn’t take kindly to change. So when new rules for data collection come down from the top, and that suddenly she needs to ask every patient to self-identify by gender (with 6 options!), by race (with even more options!) and nationality (with even more options still!!), it’s no wonder that Ms. Margaret starts thinking about early retirement. But what if she knew that this data would be used to help her patients, not to stereotype them — to help the office speak more respectfully to people of all genders, to get research funding for under-served groups? Smith shares an acrostic poem on the letters G.R.A.C.E.D. that will inspire bosses, trainers and data collectors to think carefully about the front-line employees who’ll be asking for this data. Bottom line: Always let people know that (and how) their work matters.

A bank that helps women empower themselves. A few years after social entrepreneur Chetna Gala Sinha moved from Mumbai to a remote village in Maharashtra, India, she met a woman named Kantabai. She was a blacksmith who wanted to open a bank account to save her hard-earned money, but when Sinha accompanied her to the bank, she was turned down because they didn’t think her small savings rate was worth their effort or time. Sinha decided that if the bank wouldn’t open an account for poor women like Kantabai, she would start one that would – and the Mann Deshi Bank was born. Today, it has 100,000 accounts and has done over $20 million in business. Over the years, her women customers have consistently pushed Sinha to come up with better solutions to their needs, teaching her one of the biggest lessons she’s learned: “Never provide poor solutions to poor people.” She shares the stories of Kerabai, Sunita, and Sarita – other women like Kantabai who’ve inspired her over the years and profoundly influenced her work. “There are millions of women like Sarita, Kerabai, Sunita, who can be around you also, they can be all over the world, but at first glance, you may think that they do not have anything to say, they do not have anything to share. You would be so wrong,” she says. Encouraged by the women she works with, Sinha is now in the midst of creating the first fund for women micro entrepreneurs in India, and the first Small Finance Bank for women in the world.

Paging through the Chess Records catalog. “You can’t do Chuck Berry better than Chuck, or Fontella Bass better than Fontella,” says Elise LeGrow, but on her latest record, Playing Chess, the Canadian singer pays homage to these greats (and the American label Chess Records that produced them) with intimate, pared-down interpretations of their hits. On the TED stage, she and her band performed Chuck Berry’s “You Never Can Tell,” “Over the Mountain,” first popularized by Johnnie and Joe, and a slinky cover of Fontella Bass’s sensational “Rescue Me.”

Truth comes from the collision of ideas. Legendary artistic director Oskar Eustis closes session 10 with a beautiful message about the place of theater in modern (and ancient) life. Theater and democracy were born together in Athens in the late sixth century BCE, when the idea that power should stem from the consent of the governed — from below to above, not the other way around — was reshaping the world. At the same time, people were exploring how the truth can best emerge from the conflict between two points of view. Through dialogue, empathy with characters and the experience of watching a performance together with others in the audience, the theater and democracy become parts of a whole. Fast-forward 2,500 years to when Joseph Papp founded The Public Theater. Papp wanted everyone in America to be able to experience theater — so he created free Shakespeare in the Park, based on the idea that the best art that we can produce should be available for everybody. Over the next decades, The Public brought art to the people with plays like The Normal Heart, Chorus Line and Angels in America, among many others. In 2005, when Eustis took over artistic direction, he took Shakespeare in the Park on the road, bringing theater to the people and making it about them. With Hamilton, Lin-Manuel Miranda tapped into this idea of art for the people as well. “What Lin was doing is exactly what Shakespeare was doing — he was taking the language of the people, elevating it into verse and by doing so ennobling the language and ennobling the people who spoke the language.” But we need to go a step further on this form of inclusion, Eustis says, outlining his plan to reach (and listen to) people in places across the United States where the theater, like so many other institutions, has turned its back — like the de-industrialized Rust Belt. “Our job is to try to hold up a vision to America that shows not only who all of us are individually but that welds us back into the commonality that we need to be,” Eustis says.