Polar ice doesn’t care who’s in the White House. It just melts. In the sixth session of TED2017, hosted by TED’s Head Curator Chris Anderson, we hear blunt talk on climate change — taking a 30,000-foot view from the clouds and examining some market-based solutions for cleaning the planet.

Below, recaps of the talks from Session 6, in chronological order. 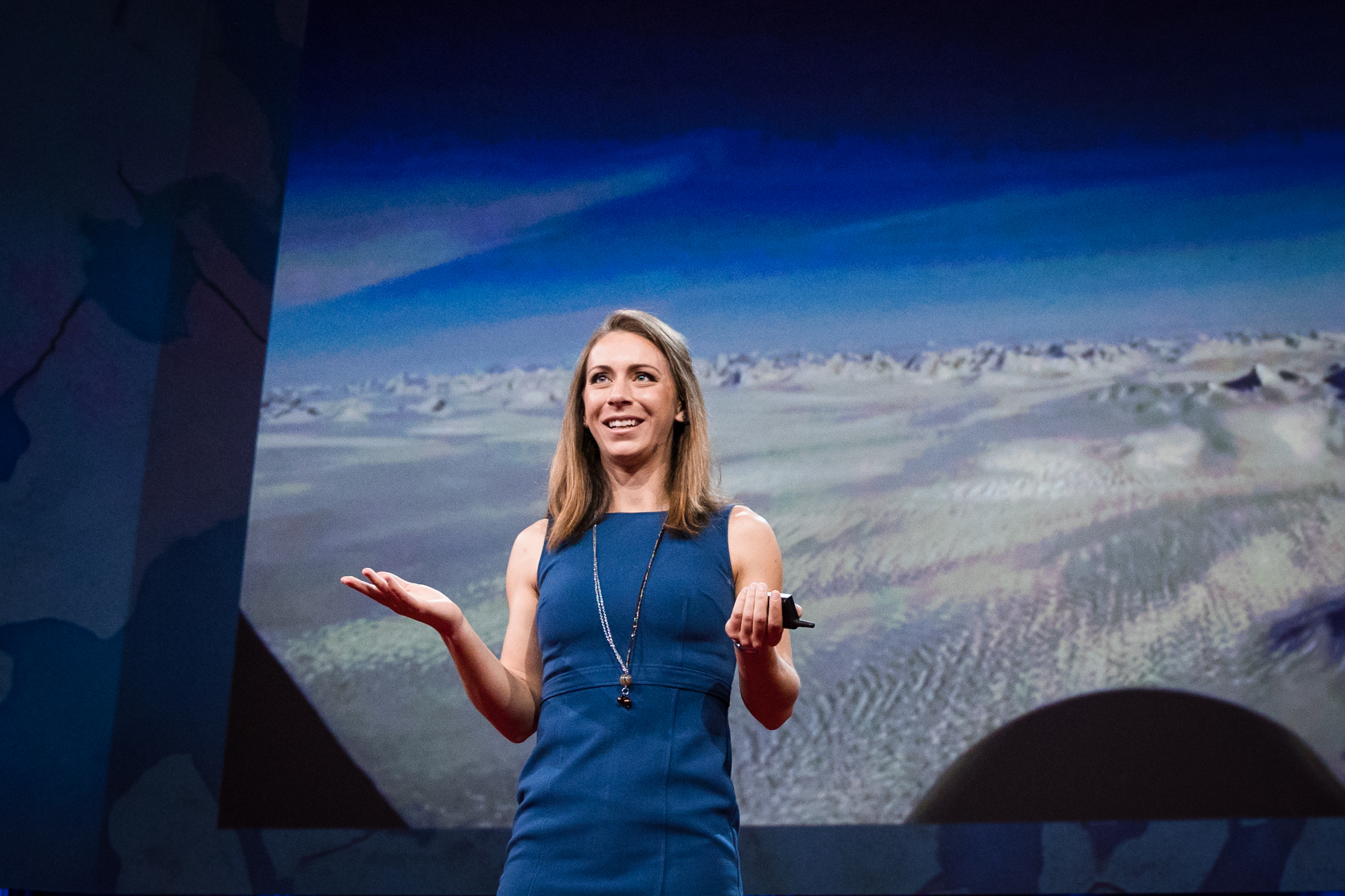 The lake in the glacier. The Greenland Ice Sheet is the size of Mexico, with ice that’s two miles thick in places. “Aircraft and satellites are revolutionizing glaciology. They’re revealing new, hidden facts about the ice sheet constantly,” says glaciologist Kristin Poinar. One of these newly discovered facts: in using radar to map the hills and valleys underneath the glacier’s frozen surface, scientists discovered a vast lake, about seven stories down. As ice on the glacier surface melts in the summer, it trickles down — then the snow above insulates it. So does this water stay there, or find its way down to the bedrock and out to the ocean, cracking the ice sheet in the process? Poinar has developed numeric models that show that, indeed, the water is reaching the bedrock. In other words: this lake is contributing to global sea level rise. Scientists have predicted that we’ll soon see 20 centimeters to one meter of rise — which, yes, is quite a wide range. “Our role as glaciologists is to narrow the possibilities,” she says. “How much sea level rise is coming, and when will it get here?”

Clouds are one of the great challenges for climate science. We don’t know how they’ll react as the planet heats up, and hidden in that uncertainty is the chance of a miracle. That is, it’s possible that clouds could resist global warming, or at least buy us some more time to fix things. Climate scientist Kate Marvel studies clouds in all shapes and sizes, and their diversity makes their impact hard to understand: low, thick clouds are a very effective planetary sunshade, reflecting about 20 percent of everything the sun sends us, but high clouds in the upper atmosphere trap heat from the planet’s surface. “The planet is trying to cool itself off, but high clouds are getting in the way,” Marvel explains. Read a full recap of Marvel’s talk.

Chalk it up to curiosity. What if we could lower global temperatures through artificial clouds — or by spraying chalk into the stratosphere? Danny Hillis knows his stance on solar geoengineering is controversial, but he doesn’t think controversy should stop our pursuit of knowledge. “We need science to tell us what our options are, and that informs both our creativity and our caution,” he says. He advocates for expanding research in geoengineering in the hopes of realizing our full potential to mitigate climate change … even if the idea of further human meddling makes us uncomfortable. “I’m an optimist not because I think our problems are small,” Hillis explains. “I’m an optimist because I think our capacity to deal with our problems is much greater than we imagine.”

The “cathedral project” we need to solve climate change. To avoid the dangerous effects of climate change, we will need to remove trillions of tons of CO2 from the air in the decades ahead, says climate scientist Tim Kruger. It’ll cost a few percent of GDP — think defense-sized expenditure — but if the scale of the solutions seems enormous, it’s only because the scale of the problem that we face is also vast. Kruger introduces the Origen Power Process, which feeds natural gas into a fuel cell. About half the chemical energy is converted into electricity, and the rest is converted into heat, which is used to break down limestone into lime and carbon dioxide. The system is designed in such a way that all of the CO2 produced — both from the fuel cell and the lime kiln — is pure, making it possible to safely store the CO2 deep underground at low cost. We can then use the lime in a range of industrial applications — and, while it’s used, it’ll mop up CO2 from the air. Overall, the process is carbon-negative, taking CO2 out of the air. You could even add the lime to seawater to directly counter ocean acidification — addressing another one of the problems our CO2 emissions are causing. While these solutions are untested and potentially dangerous, we need to start thinking about ambitious ways to reverse climate change, Kruger says. “You could describe it as a cathedral project — those involved at the outset may draft the plans and dig the foundations, but they will not raise the spire to its full height. That task, that privilege, belongs to our descendants. None of us will see that day, but we must start in the hope that future generations will finish the job.” 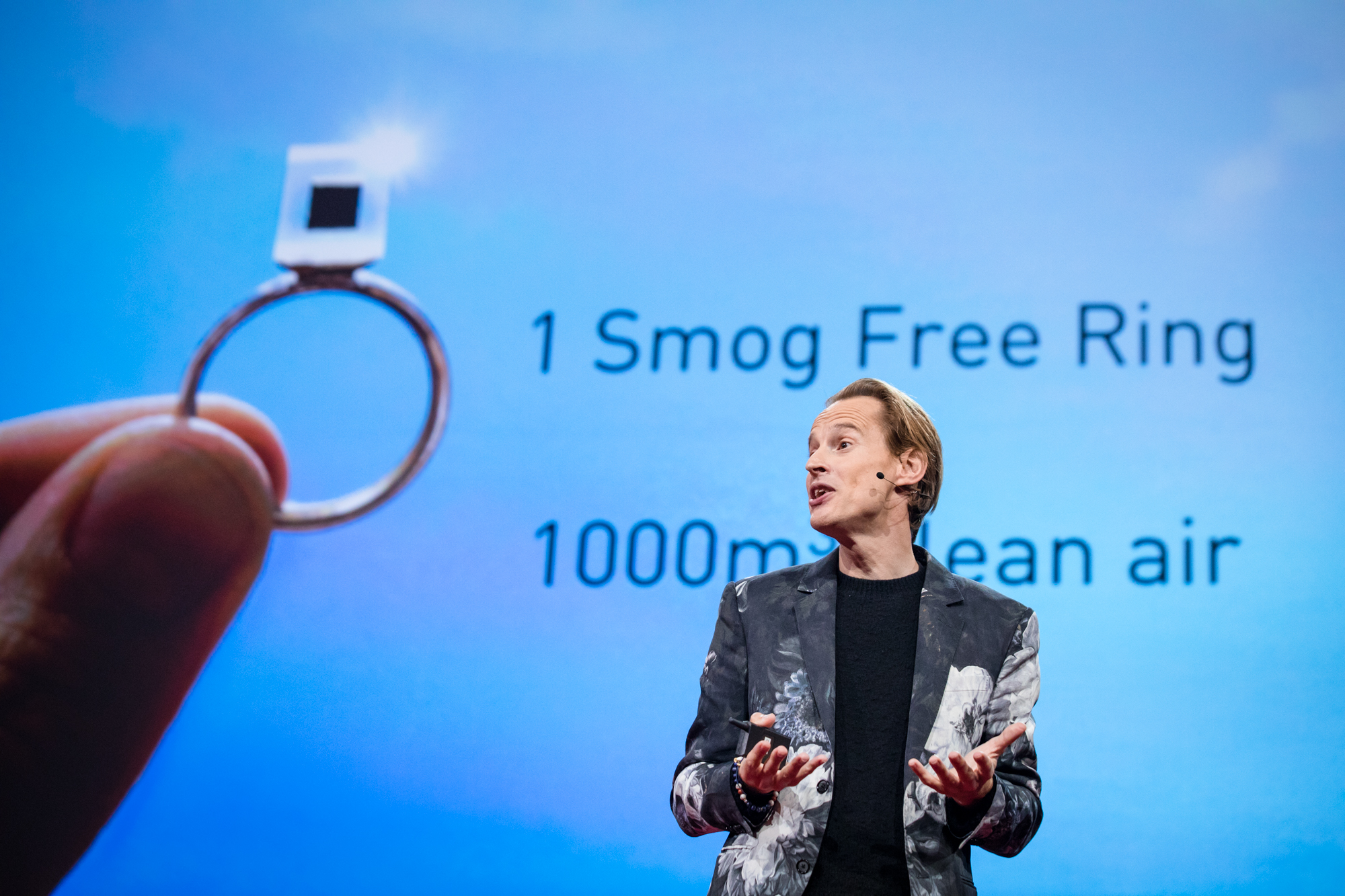 Human skills in a hyper-technical world. We need new ideas, new dreams and a desire to make them happen, says Dutch architect/artist Daan Roosegaarde. In this energetic talk, he shows us his latest projects, which connect new technology and creative thinking. He takes us from the sidewalks of Amsterdam, where he re-interpreted Starry Night to get people thinking about green energy, to Beijing, where he developed a smog vacuum to clean local parks — and a process to turn the waste that the vacuum collects into diamond-like rings. He even shows us his solution for killjoys who squash creativity — a chair with voice recognition software that shocks any sitter who utters the words “yes, but …” In a hyper-technical world, says Roosegaarde, creativity will be our true capital.

The alternative to urban sprawl. Cities are at the heart of so much that matters, from climate change to economic vitality to our own well-being. Going forward, we’re going to build bigger and bigger ones. “If we don’t get that right, I’m not sure all the climate solutions in the world will save mankind,” says urban designer Peter Calthorpe. To get it right, we desperately need an antidote to urban sprawl. Enter Urban Footprint, a process-based urban planning tool that allows us to compare and contrast between urban growth scenarios, namely sprawl and what Calthorpe calls “smart growth” (think cities that are greener, more walkable and community-based). “It turns out smart growth works better,” he says, outpacing sprawl on everything from greenhouse gas emission to household savings. He concludes by sharing seven universal principles of smart growth: 1. Preserve the natural environment, history and agriculture; 2. Create mixed-use and mixed-income areas; 3. Walk; 4. Bike; 5. Create street networks with many kinds of streets and many possible routes; 6. Transit; and 7. Create a city hierarchy based on transit rather than free waste. “Most people get it,” says Calthorpe, “They understand intrinsically what a great city should and can be.” 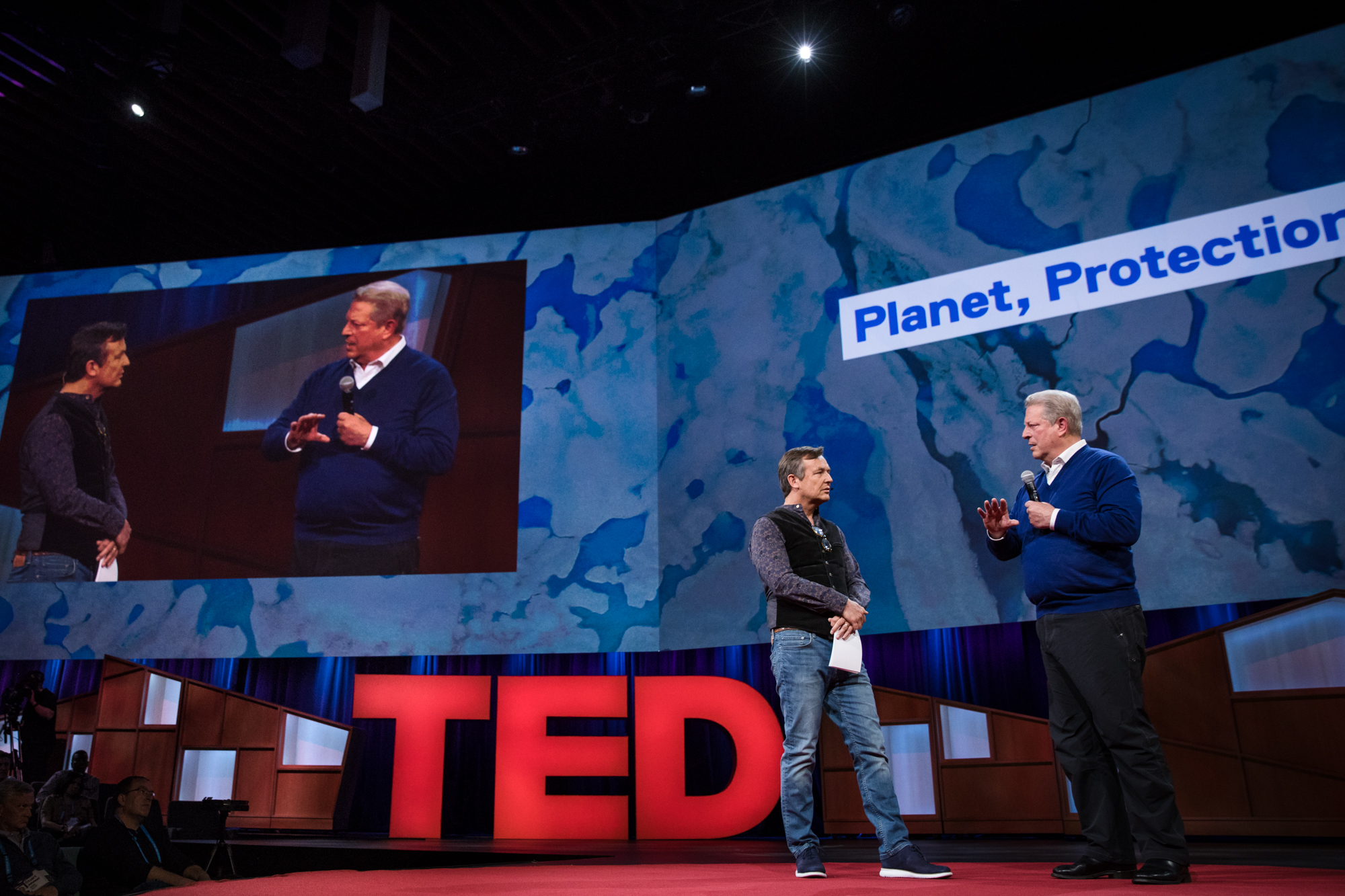 The truth? Still inconvenient. “Thank you for all the trouble you’ve caused,” says Chris Anderson as he welcomes Al Gore to the stage. Eleven years ago, Gore spoke at TED, and shortly afterward released the documentary An Inconvenient Truth. Today, he’s here with the trailer for An Inconvenient Sequel. Anderson asks him what he thinks of geoengineering — and Gore is skeptical. “I think it’s great to have exploration of a lot of out-of-the-box ideas, but the the main idea is: we’ve got to stop putting 110 million tons of manmade global warming pollution up there every day … [There’s] a very thin shell of atmosphere we’re using as an open sewer.” Still, Gore feels optimistic that we can turn the tide against climate change. “I am convinced we’re in early years of the sustainability revolution, which has had the scope and magnitude of the Industrial Revolution but the speed of the digital revolution,” he says. “The whole global economy is retooling.” Gore encourages all to attend the People’s Climate March on Saturday, and he says that, in conversations with the White House, he thinks the odds are the US will stay in the Paris Agreement. “That agreement sent a very powerful signal,” he said. “It has already begun to accelerate the sustainability revolution.”

Climate change is a security issue. David Titley is a meteorologist and retired Navy officer who was stationed in the Gulf Coast in the early 2000s. In Hurricane Katrina, he lost his house — it was swept away, possibly to sea, and never seen again. “As sea levels come up, it takes weaker and weaker storms to do this,” he says. Titley views climate change as a security problem. He gives another example: in the 1970s, when the Assad family took power in Syria, their goal was agricultural self-sufficiency. But after a drought and heat wave a decade ago, farmers were left with nothing but dust. They headed to the cities, already stressed by refugees from Iraq. No support came, creating a breeding ground for extremism. “In the security community, we say that climate change accelerates the risks of instability,” he says. “It makes bad places worse.” So what to do? Titley makes an ask here. “In the military, we have known for decades, if not centuries, that the time to prepare — whether it’s for a hurricane, a typhoon or strategic changes — is before it hits you,” he says. “I ask that you engage with every business, technology and government leader and ask, ‘Ma’am, sir, what are you doing to stabilize the climate?'” After all, he says, “The ice doesn’t care who’s in the White House. It doesn’t care which party controls your Congress or your Parliament. It just melts.”

A conservative’s plea for climate solution. With polarized views of climate issues, how do we enable bipartisan support to create effective climate policy that will spark progress for generations to come? For climate expert and policy maker Ted Halstead, the solution is a carbon dividends plan. Co-authored with respected Republican politicians and business leaders, the plan, called The Conservative Case for Carbon Dividends, overcomes several near-insurmountable barriers to climate progress: the psychological barrier, the geopolitical barrier and the partisan barrier. Remarkably, this is the first market-based climate solution put forth by Republicans. Built on four pillars, it starts with a gradually rising carbon tax that would eventually grant carbon dividends for all; Americans would benefit by receiving more in dividends than they would pay in increased energy prices. “This [plan] illustrates the power of a conservative climate solution based on free markets and limited government,” Halstead says. “Doesn’t that sound like something we could all support?”