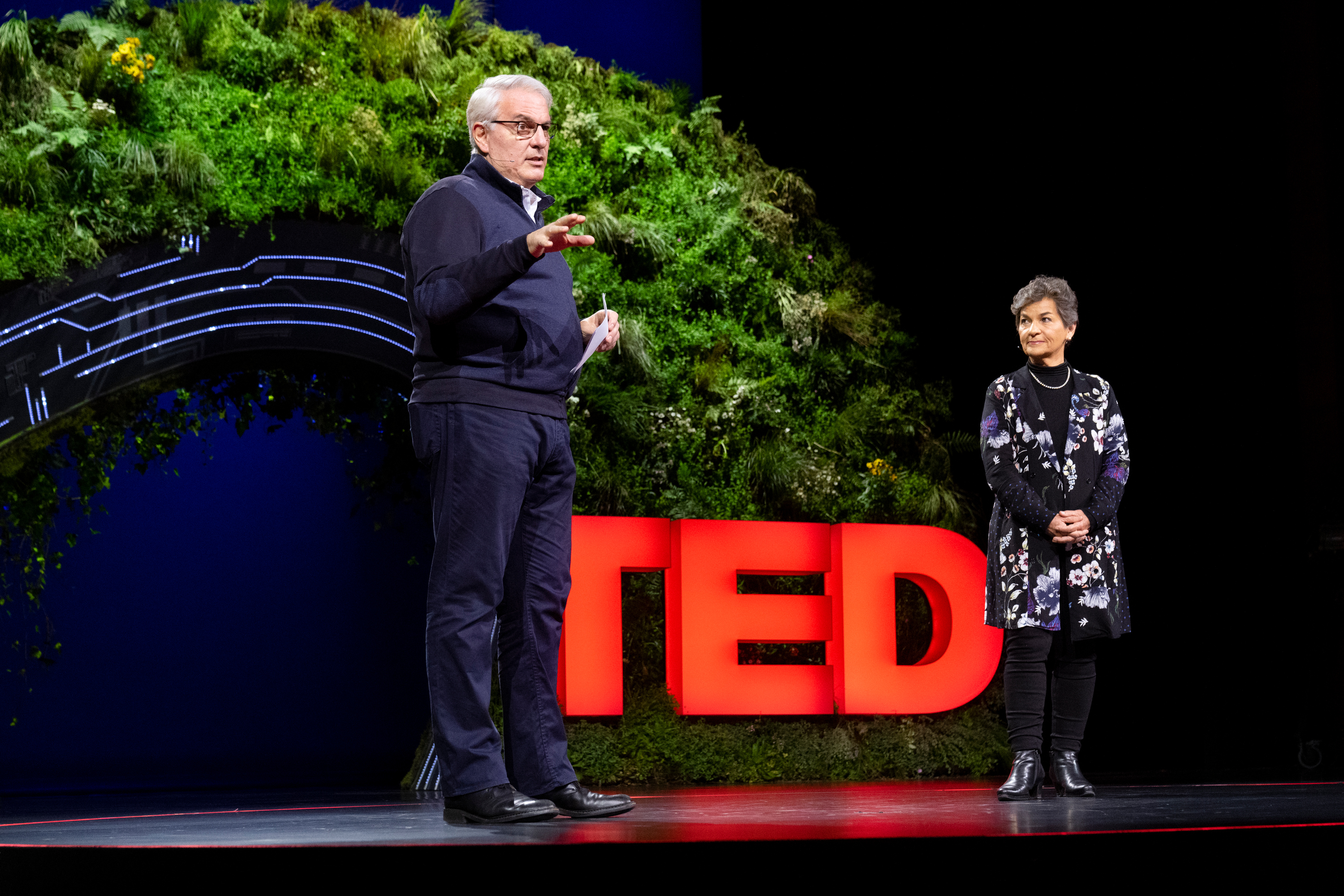 It’s the last morning of Countdown Summit, and we have a better sense of the exciting climate initiatives that are scaling up — but also of the size of the mountain we’re climbing.

In Session 6, eight speakers take it all on — from forests and soil, to markets and law, to arts and communication.

Performance: Poet and “freedom-forging futurist” Naima Penniman delivers a stunning spoken word poem — an evocative, moving tribute to the natural world and our connection to it. 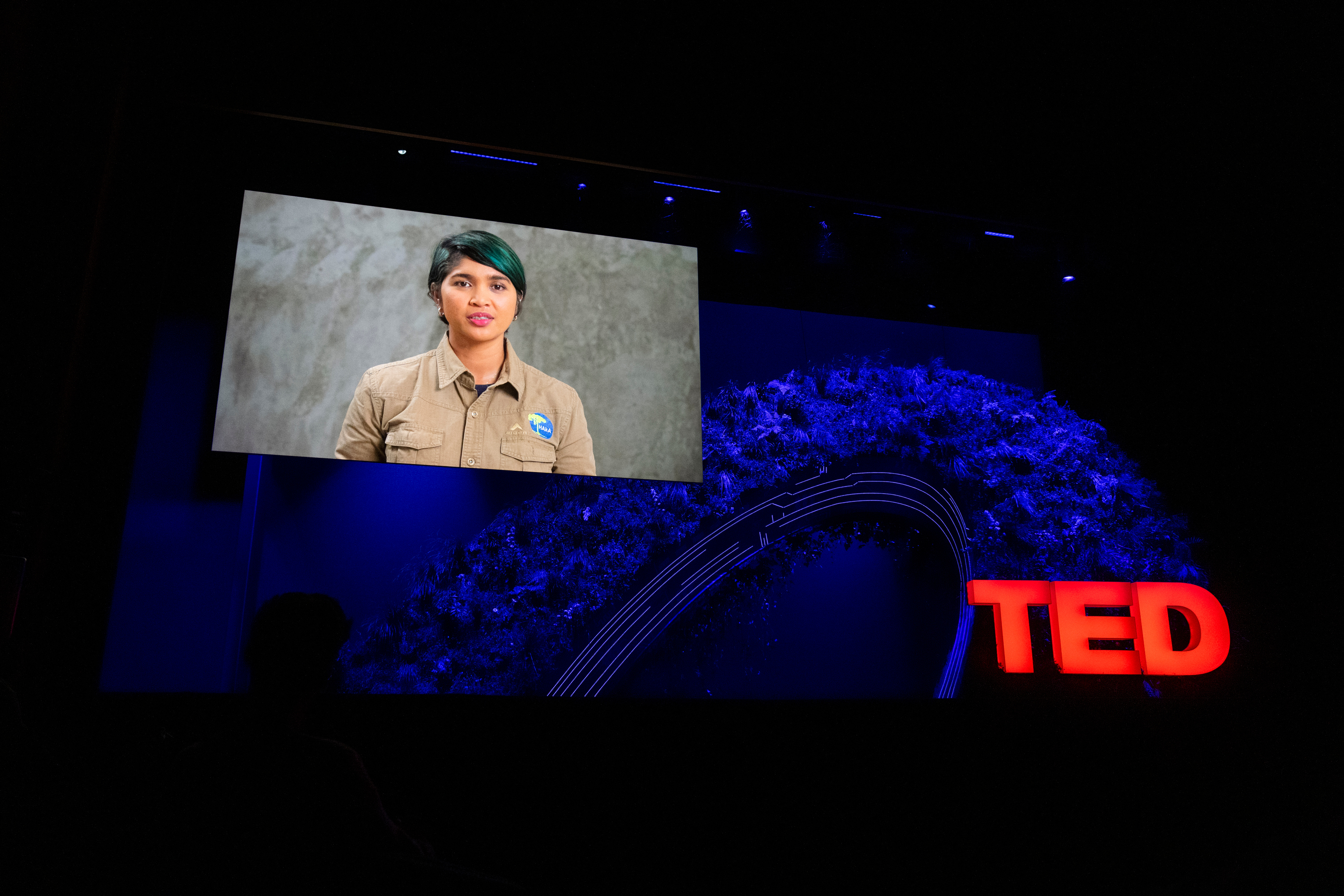 Big idea: Farwiza Farhan is well-known for her fight to preserve the Leseur ecosystem, one of the last places on Earth where orangutans, rhinos, elephants and tigers still roam the wilderness together. But for Farhan, the true warriors are the women on the ground fighting day-to-day conservation battles.

How? Farhan is inspired by women like Sumini, an Indonesian conservationist helming the first woman-led ranger team at the front lines of forest preservation. Working within a patriarchal tribe where women are typically subservient, Sumini led the efforts to map her native forest, a crucial first step for both government recognition of her homeland and for saving its crucial environmental and economic resources. In a country where forestry initiatives usually benefit male elders (and strengthen existing inequalities), social and environmental justice requires nurturing women like Sumini in every local community, Farhan says.

Big Idea: From growing crops to storing carbon, healthy soil matters more now than ever — and we need to protect it.

Why? Under your feet, soil is teeming with hardworking and diverse microbial life that has the potential to stop global warming in its tracks, says climate change scientist Jane Zelikova. The “wee beasties” (or microbes, as described by Dutch scientist Antoni van Leeuwenhoek centuries ago) help accumulate and store massive amounts of carbon, clean water, nourish crops and reduce pollution — but ​​over the last 12,000 years, we have lost billions of tons of that carbon in our soils. Zelikova urges us to rethink agricultural practices to protect our soils and the carbon they hold; to get more carbon in the ground by growing diverse, climate-adapted crops; and to leave the microbes alone to do what they do best. “Soils are the literal foundation of life on this planet — the reason that we eat and the climate solution just waiting to be unlocked,” says Zelikova. “Let’s build back our soils and help our planet by looking down to the ground.” 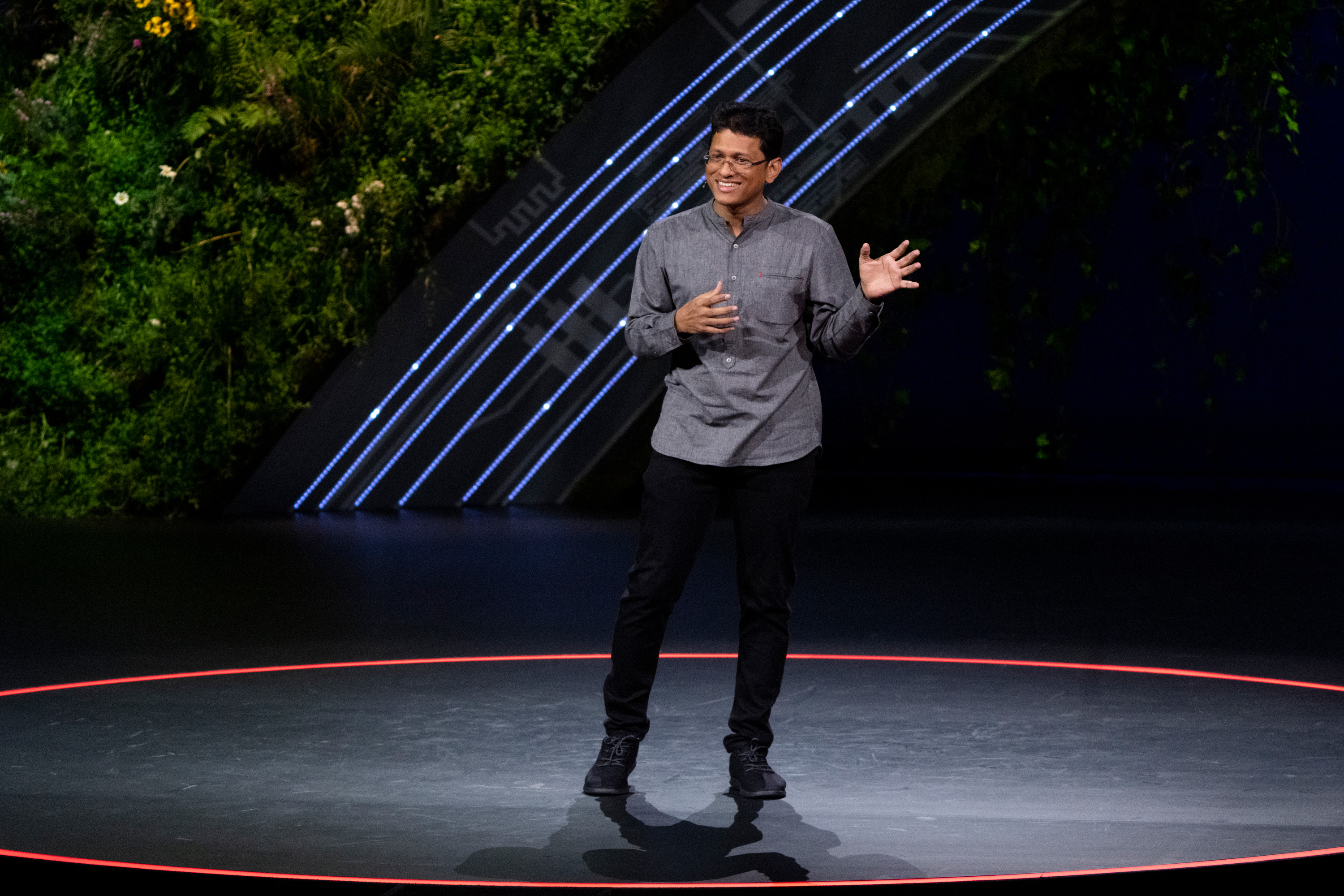 TED Fellow Sathya Raghu Mokkapati presents his work on a greenhouse-in-a-box that can help raise small farmers out of poverty. He speaks at Session 6 of Countdown Summit on October 15, 2021 in Edinburgh, Scotland. (Photo: Gilberto Tadday / TED)

How? For small-scale farmers in India, farming has long been an unreliable source of income, as crops that flourish one season can fail the next. Climate risk is now making the profession nearly impossible. According to TED Fellow and green farming innovator Sathya Raghu Mokkapati, one farmer in India dies by suicide every 51 minutes. The Indian entrepreneur is determined to improve the plight of small farmers and provide them with dependable income even amidst the ongoing threat of climate change. That’s why he and his team developed what they call a greenhouse-in-a-box. The small, easy-to-build structure is covered with netting to cut off heat, prevent bugs and increase crop yields using less water. Raghu Mokkapati estimates that this low-cost technology can bring a farmer an extra $100 per month in profits. So far, nearly 2,000 farmers in South India have joined Raghu Mokkapati in his movement — he hopes to reach 100,000 farmers in the next five years.

Sandrine Dixson-Declève, co-president of the Club of Rome

Big idea: In the 50 years since The Limits to Growth report was published by the Club of Rome, the alarming climate trends that it warned about have drastically increased.

What have we learned since then? Updated models of humanity’s growth continue to show that the business-as-usual scenario isn’t working, demonstrating that we must shift our growth patterns, says Sandrine Dixson-Declève, co-president of the Club of Rome. With the launch of the EarthforAll initiative, Dixson-Declève and the Club of Rome have identified five turnarounds that will enable us to thrive: energy, food, inequality, poverty and population (including health and education). Previewing the Club’s next report, Dixson-Declève explains that now is the time to do things differently, transitioning new and existing capital towards solutions. She estimates that the cost of shifting to sustainable growth will be around five percent of global GDP each year — an achievable, single-digit number. The cost of inaction is much greater. “We have too much bad news for complacency, but we have too much good news for despair,” says Dixson-Declève, quoting The Limits to Growth coauthor Donella Meadows. “Let’s kick complacency out the door.”

Big idea: The industry of “professional services” — such as advertising and PR firms, big management consultancies and finance companies, corporate law firms and lobbyists — have a massive but largely unnoticed influence on climate.

How? Solitaire Townsend calls it the “X-industry,” where “X” stands for influence. Even though the direct carbon footprint of this sector is relatively small, the “brainprint” of the X-industry is felt everywhere — they’re the storytellers and problem-solvers who act as “the grease in the wheels of all businesses on Earth,” Townsend says. For instance: big consulting groups provide financial modeling for new oil and gas exploration; lobbyists fight for less regulation of those projects; and PR firms protect the reputations of companies that do the drilling. In this sense, the greenhouse gas impact of the industry is enormous — if uncalculated. Building off the three groups of carbon emission measurement (referred to as Scopes 1, 2 and 3), Townsend believes we need a new “Scope X” — a way to calculate the “emissions of influence” of the X-industry and hold it to account. Armed with this data, the X-industry could move from being an abettor in environmental destruction to part of the solution. 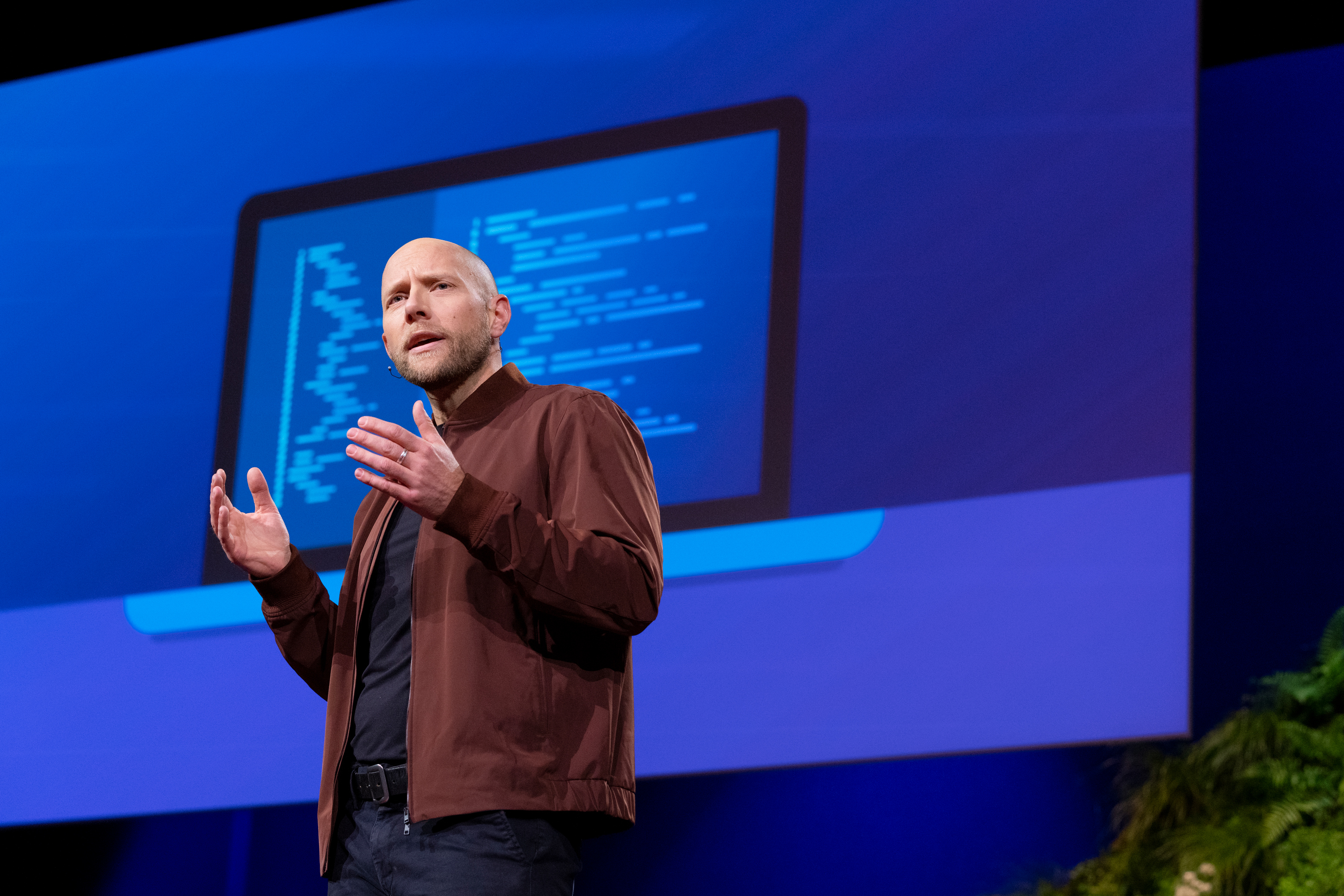 Can we “code” the program for net-zero emissions? Lucas Joppa, Chief Environmental Officer at Microsoft, shares his answer at Session 6 of Countdown Summit on October 15, 2021 in Edinburgh, Scotland. (Photo: Bret Hartman / TED)

Big idea: By treating the plan to achieve net-zero carbon emissions as a coding challenge, we can identify and resolve “bugs” in the system.

How? The developers of any net-zero carbon program face the same challenge as software engineers, says Lucas Joppa, Chief Environmental Officer at Microsoft. Issues with the program are bugs in the code. Joppa identifies three of these “bugs” in our plan to achieve net-zero and explains how to fix them. First, we need a common definition for the term net-zero. Without one, our progress as a planet remains difficult to track. Second, we struggle to define the impact or benefit of different carbon offsets on the climate because we lack a universal unit of measurement for carbon offsets. We need to standardize both how we record carbon outputs and how we measure carbon offsets. Third, we should support the fledgling market for carbon removal and ensure that it’s as robust as the market for carbon offsets. Although we’re working against the clock, Joppa believes we will rise to what has become the greatest challenge of our time: recoding our current course on climate change.

Big idea: There are signs that China is becoming a global environmental leader.

How? James K. Thornton is the founder of ClientEarth, a nonprofit law firm working to address the climate crisis. He tells the story of his team’s work in China, where they’ve been training judges and prosecutors on climate law and litigation in a growing effort to use the power of the legal system to create positive environmental impact. He estimates that their cooperation with China’s environment ministry, judiciary and federal prosecutors has initiated some 80,000 environmental cases — ranging from environmental NGOs suing polluting companies to large financial institutions ending their investments in coal. More needs to be done, Thornton says, but the current, systematic commitment to change is a sign of hope.