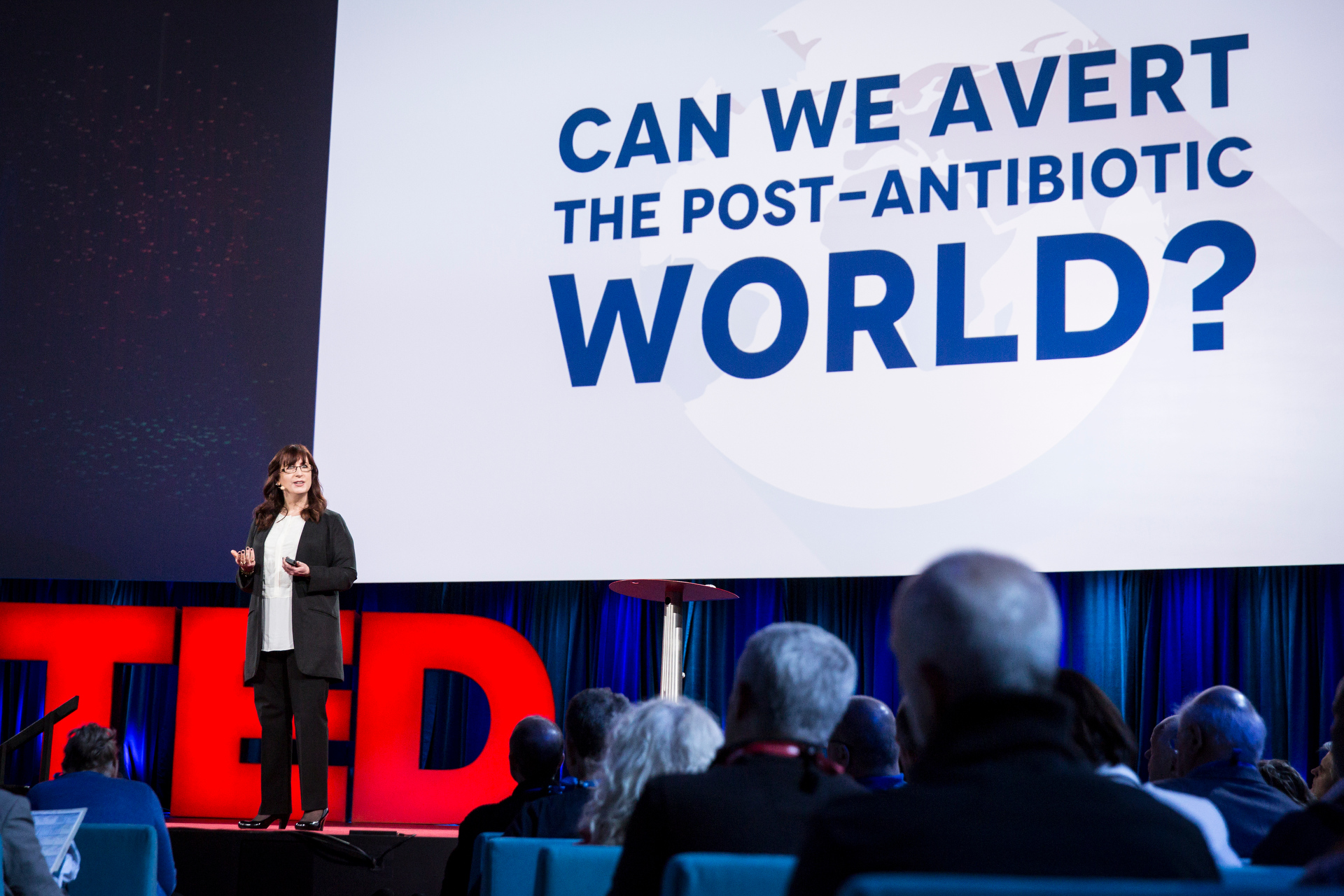 Maryn McKenna suggests we need to question our dependence on antibiotics — and lays out the consequences if we don’t. Photo: Bret Hartman/TED

“We need a different view of the world,” says Chris Anderson, the host of Session 6: Radical Reframe, on the Wednesday morning of TED2015. Enjoy these recaps of the speaker in this session, who might just flip your thinking on things you thought you knew — from antibiotics to papayas.

New metaphors, not new medicines. We often think that the reason we aren’t delivering the most sophisticated therapies is because we need more powerful drugs. But as physician Siddhartha Mukherjee says, “what’s at stake is the metaphor, not the medicines.” For roughly the past hundred years, since the introduction of antibiotics in the US, our approach to treatment has been: You have a disease, you take a pill, you kill something. But, says Mukherjee, only .025 percent of all chemical reactions in the body can actually be targeted by this lock-and-key mechanism. So let’s think about pathology in noninfectious diseases in the reverse direction, he says: from the cell level, to the organ, to the environment. Consider our approach to depression: We started treating it at the cellular level by adding dopamine and turning off molecules. “And that worked – to a limit,” he says. Next we realized we could actually change the physiology of the organ, by using talk therapy to change the brain. And this was better – we saw that talk therapy in combination with medicine worked better than either alone. So next we should imagine immersion therapies, says Mukherjee. “‘Growing’ is the right metaphor” for treatments – not killing. He’s taking that approach to osteoarthritis, which will affect 60 percent of people in their lifetime. Says Mukherjee, “We were looking for a pill when we should have been looking for a cell.” Thinking ofosteoarthritis as a stem cell disease, he and his team are now imagining how they might grown cartilage and then to find ways of passively promoting exercise and regrowth to fight the condition. So in the future, says Mukherjee, we should be thinking about “new mechanisms, models, metaphors” and start asking questions like: “Could your medicine be a cell? Could your medicine be an organ created outside your body? Could your medicine be an environment?”

Antibiotics in danger. “Scary disease girl” Maryn McKenna sees a not-too-distant future of antibiotic resistance that threatens lives everywhere. In a sobering talk that challenges our conventional narratives of progress in biomedicine, the public health journalist warns against our current uses of antibiotics, which is leading to faster and faster bacterial resistance to our medicines. “For 70 years, we played a game of leapfrog: our drug, and [the bacteria’s] resistance, and then a new drug, and then resistance again. But now the game is ending, because the bacteria have leaped ahead once more — and this time, we have no new drugs to block them.” Antibiotic resistance has serious implications for the ways we conduct medicine. As McKenna notes, if we lost antibiotics, we’d lose now-routine medical practices for people with weakened immune systems, like cancer and AIDS patients, as well as any surgeries or treatments that open up the body to foreign pathogens. Ultimately, McKenna warns, we could lose the confident way we live our everyday lives. If you knew that any injury would kill you, would you ride a motorcycle? But: There is hope, if we act fast. To slow down the arrival of the post-antibiotic world, we need to incentivize pharmaceutical companies to develop novel antibiotics that the superbugs have never seen before. There are tech solutions as well: surveillance systems to trace emergent resistance and big-data analysis to measure how antibiotics are being used. And as a society, we need to change our habits around consuming antibiotics: Think twice before prescribing or taking that pill.

Why we need genetic engineering for food. Plant geneticist Pamela Ronald says that the greatest challenge of our time has to do with food. How can we nourish the growing global population without further damaging the environment? Her work in isolating genes that can improve crops — to make them more resistant to plants, more resilient in the face of climate change — is key. After pointing out that genetic modifaction of plants is not new, and has in fact been happening for hundreds of years, she gives us some examples of how it can help. Take the Hawaiian papaya, which was almost decimated by a virus in the 1950s. By genetically engineering a tiny bit of the virus into the plant, the crop — and the industry — was revived. Or take eggplant farmers in Bangladesh, who were damaging their own health to beat back a caterpillar that was destroying their crop. A single gene can bring the spraying down to zero. To hear more about how this works, and Ronald’s bold response to those who are concerned with genetic modification of crops, read a full recap of the talk. 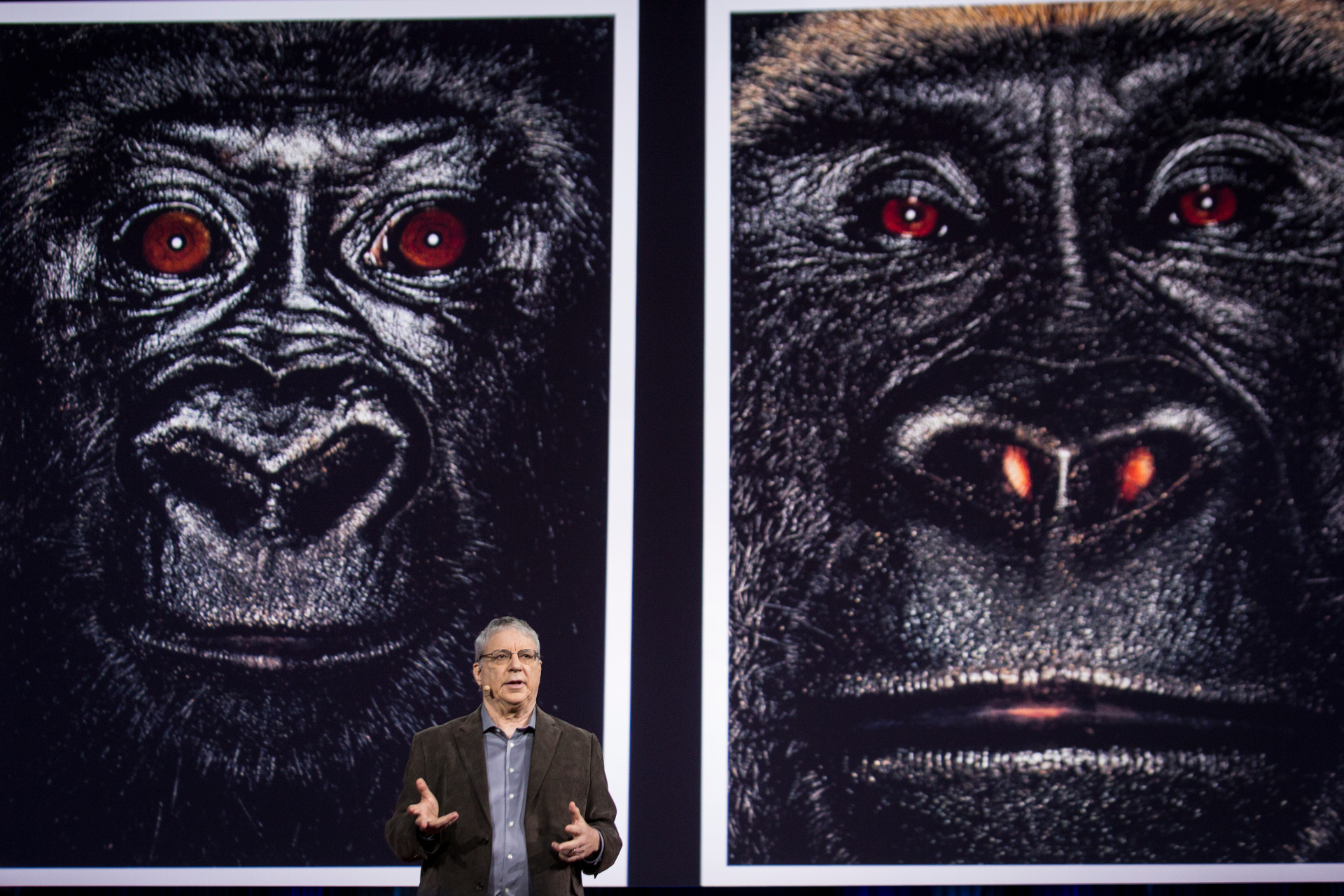 Steven Wise speaks up for the rights of non-human animals — including their legal rights. His latest legal case has chimps as plaintiffs. Photo: Bret Hartman/TED

The fate of non-human animals. Lawyer Steven Wise has a bold idea: It’s time to start treating non-human animals like legal persons, not legal things. Pencils, books, cars – these are all legal things, while humans are considered human persons. “These are not synonymous,” says Wise. Throughout human history, slaves, women and children have all been categorized as legal things, and they have all broken through the wall to become human persons. In his fight to do the same for non-human animals, Wise draws on a legal cause of action demonstrated in the case of Somerset v. Stewart in 18th-century UK, in which James Somerset, a slave and legal thing, successfully demanded a writ of habeas corpus, which was only available for legal persons. Appealing to the human principles of liberty and equality, Wise and his team chose their first plaintiffs a group of chimpanzees held in captivity in the state of New York. “We know the extraordinary cognitive abilities that [chimps] have,” says Wise. Research on chimps “all add up to autonomy and self-determination,” he says. They’re a species that has culture and language and shows consciousness of its own consciousness. So since 2013 Wise and his team have been using the same common-law writ of habeas corpus to save these chimps.

View from the eye in the sky. Chuck Berry is an adventurer and aerial daredevil: he has done more than 6,5000 skydives, wingsuit-jumped over Yokohama Harbor, and has even pioneered “underground BASE jumping.” Berry is here to talk about wearable sports cameras, and how they are transforming the sphere of action sports. “In the old days, before these small cameras, to catch three angles on a jump, I would need to jump three times,” he says. “Now I can get all three, perhaps making my job a wee bit safer.” Wearable cameras are a great training tool, they’ve revolutionized the scoring of contests and they allow for “POV shots,” where the viewer sees the adventurer’s perspective. But perhaps the biggest impact is how they’ve flipped the economic model. “Before, the person at the front doing the dangerous stuff didn’t get the ownership — or get paid,” he says. “Through wearable cameras, we can capture our video, edit it, share it on YouTube and feed it to an international audience hungry for action … We can more easily than ever transmit the spirt of adventure to others.” 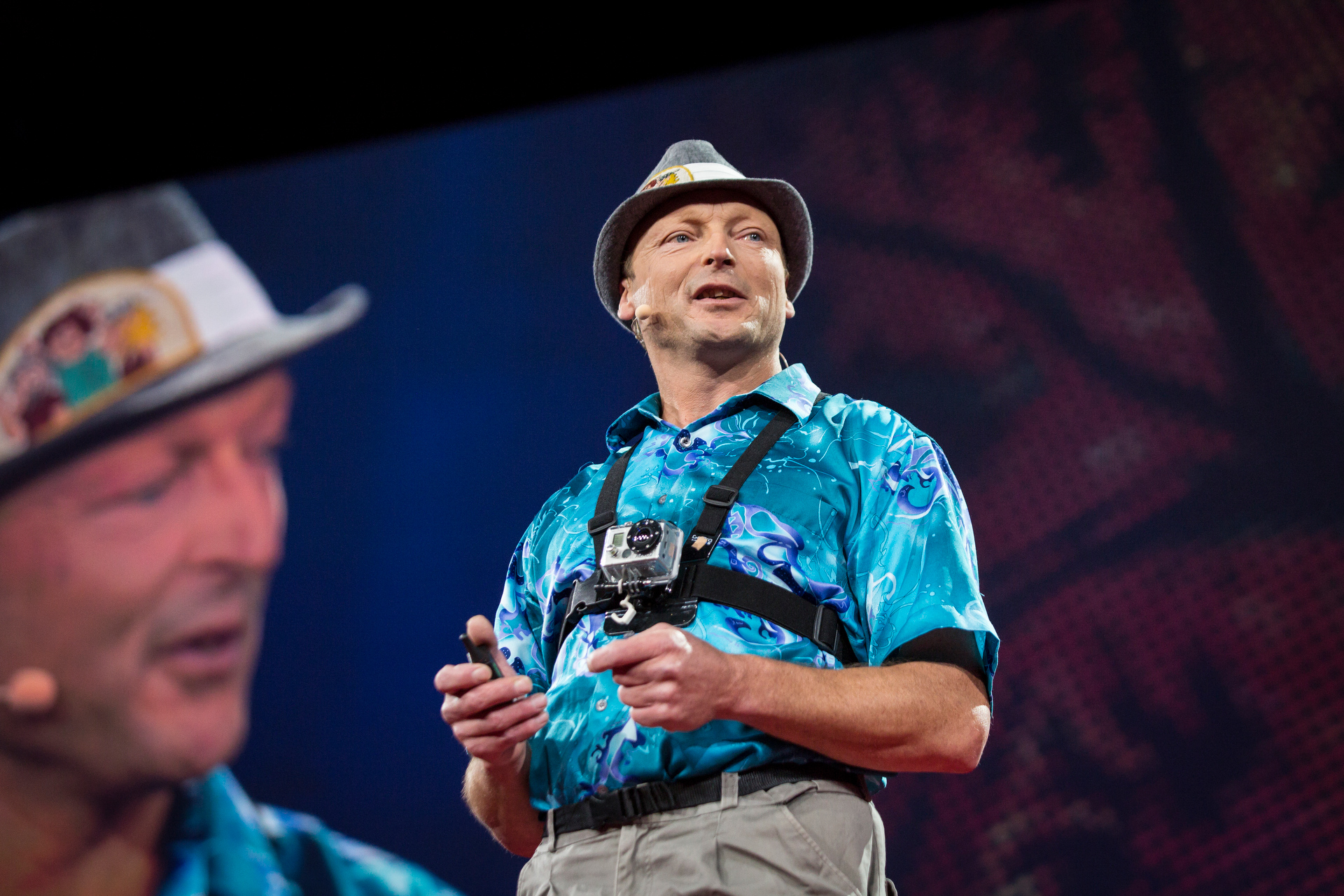 Extreme sports enthusiast Chuck Berry, sporting a chest-mounted videocam, talks about “what happens when you point a camera at an adventure.” Photo: Bret Hartman/TED