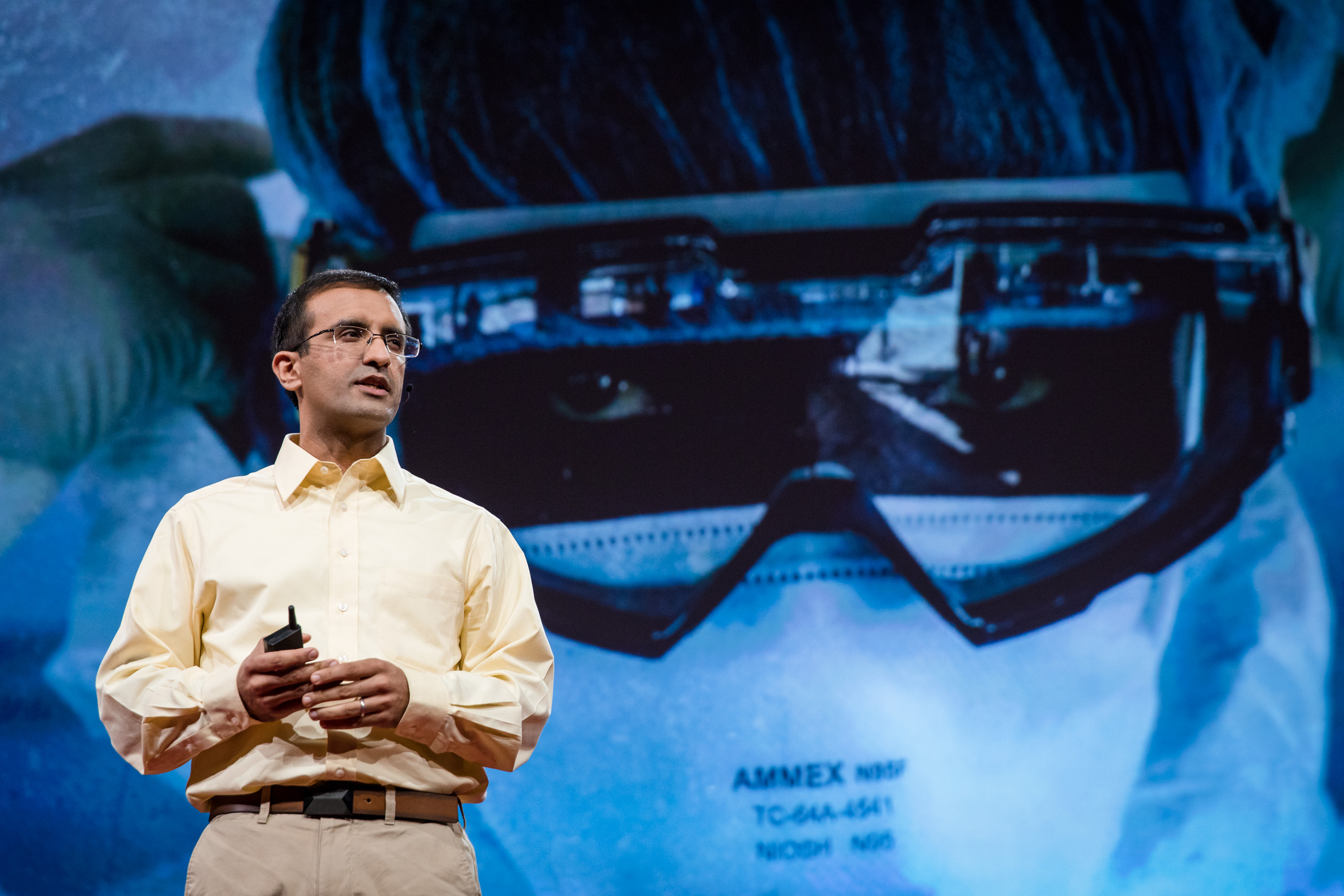 2017 TED Prize winner Raj Panjabi tells the story of how community health workers in Liberia faced down fear and stopped the Ebola epidemic in its tracks. Photo: Bret Hartman / TED

Raj Panjabi was your typical science- and soccer-loving 4th grader in Monrovia, Liberia. But when a brutal civil war erupted in the country, normal life was upended.

On the TED2017 stage, Panjabi recalls his mother knocking on his door, telling him to pack his things. They had to flee. One image from that day has stayed etched in his memory ever since. While his family was stuffed onto a rescue plane, a long line of Liberians formed, many of them with children. “When they tried to jump in with us, I watched soldiers restrain them. They were not allowed to flee.”

Panjabi’s family eventually resettled in the United States and, with the help of their community in High Point, North Carolina, his father opened a clothing shop. In 2005, after Liberia’s civil war had ended, he returned to his country as a medical student, determined to serve. “I found utter destruction,” he says. “The war had left us with just 51 doctors to serve a country of 4 million people. It would be like if the city of San Francisco had just 10 doctors.”

Panjabi felt like he was failing his patients, who were coming to him too late to save. Like one billion people around the world, many Liberians live in remote communities that are far from a health clinic. For them, getting medical care can involve canoeing across rivers and hiking through rainforests — sometimes for days. “Despite the advances we’ve made in technology and modern medicine, our innovations have not reached those in the last mile,” he says. “These people have been left behind.”

Panjabi wondered: Could the health-care system be reorganized? What if community members could learn to diagnose and treat common medical problems, and perhaps even become the center of a health-care system for their communities? With a team of Liberian and American partners, he launched Last Mile Health to explore this.

In the years since, Last Mile Health has designed a three-step process: They train community health workers to prevent, diagnose and treat the 10 most common diseases, including malaria and pneumonia; they equip workers with a backpack of modern diagnostic tests and medicines, plus a smartphone to report on epidemics; and they issue job contracts so these workers get paid. This last part is crucial, and something often overlooked in community health programs. Because a paycheck means dignified, professionalized work. 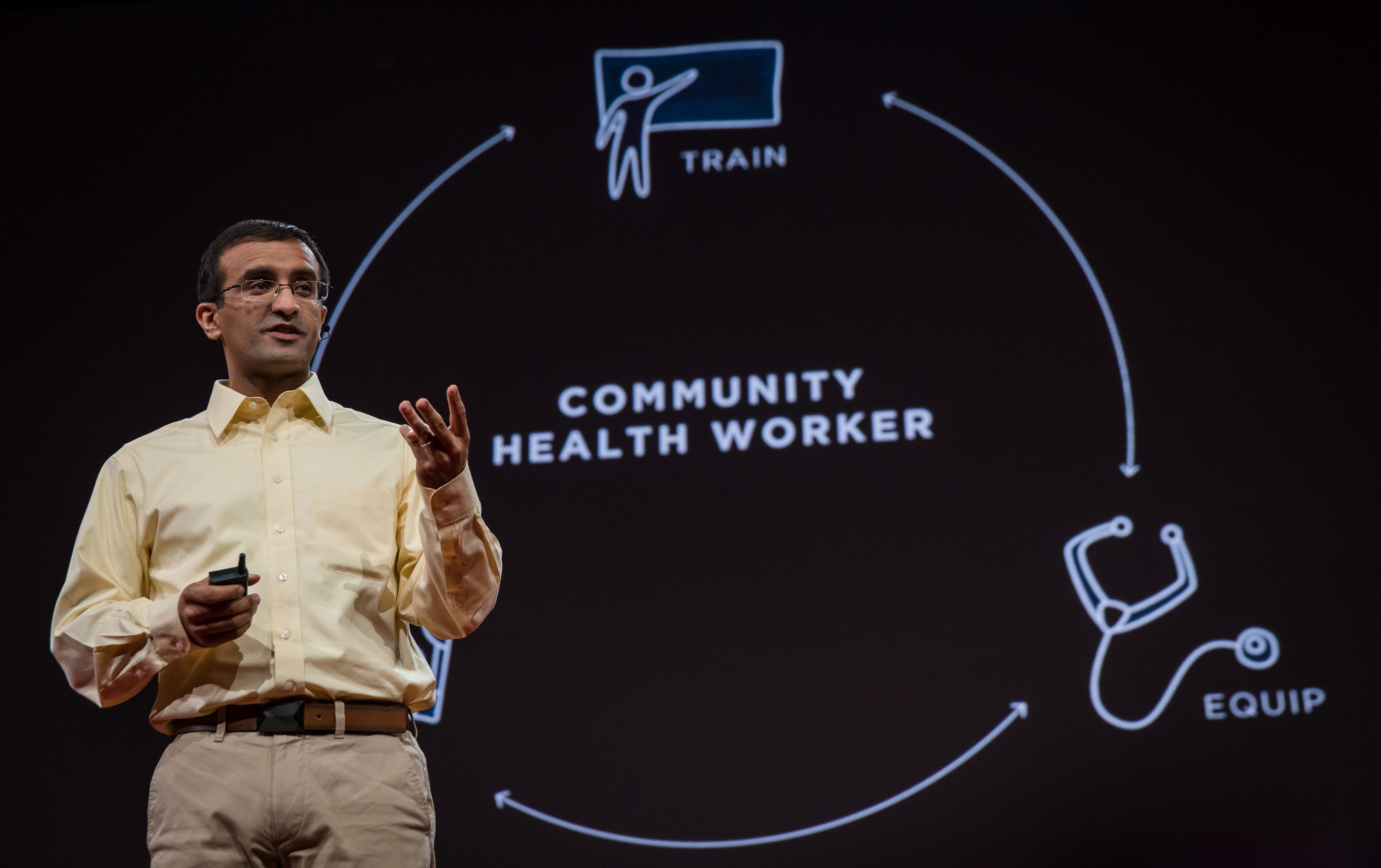 By training, equipping and paying community health workers, Last Mile Health has revolutionized care for children and mothers in the communities they serve. This model can work elsewhere too. Photo: Bret Hartman / TED

Last Mile Health’s approach brings health care door-to-door in remote communities. But it transcends that purpose too: it also creates jobs. Panjabi introduces us to a community health worker named A.B., who had to drop out of school in the 8th grade. He loves his work, not only because it gives him the opportunity to help people, but because it’s an opportunity to learn. “Doc,” he told Panjabi. “My brain is getting fresh.”

Panjabi points out that doctors rely on apps and online courses to stay certified and up to date on their skills. His vision is for community health workers — these everyday heroes who helped stop Liberia’s Ebola epidemic in its tracks and who’ve dramatically increased care for children and pregnant women in their communities — to have the same. “It’s time for a collision between digital education revolution and the community health revolution.”

That brings him to his TED Prize wish: “I wish that you will help me recruit the largest army of community health workers the world has ever known, by creating the Community Health Academy, a global platform to train, connect and empower.”

Anyone who wants to be a part of this vision is invited to visit CommunityHealthAcademy.org, and sign up for updates on actions they can take to help.

“For all of human history, illness has been universal, but access to care has not,” says Panjabi. “My dream is that this Academy will contribute to the training of hundreds of thousands of community health workers, who’ll serve hundreds of millions … from the rainforests of Liberia, to the hilltops of Appalachia, to the mountains of Afghanistan.”