How we’ll get health care to the billion people who lack it: Raj Panjabi reveals his TED Prize wish

Raj Panjabi was your typical science- and soccer-loving 4th grader in Monrovia, Liberia. But when a brutal civil war erupted in the country, normal life was upended. On the TED2017 stage, Panjabi recalls his mother knocking on his door, telling him to pack his things. They had to flee. One image from that day has stayed […]

It sounds simple enough: If you’re sick, you make an appointment with a doctor, and if it’s an emergency, you head to the nearest hospital. But for more than a billion people around the world, it’s a real challenge — because they live too far from a medical facility. Where Raj Panjabi’s nonprofit, Last Mile […]

Larry Brilliant’s new book shows how pandemics can be eradicated

Epidemiologist Larry Brilliant remembers the day in 1974 when, while working for the United Nations in India, a mother handed him her young son, who had died only moments earlier from smallpox. Brilliant also remembers the day, about a year later, when he traveled by speedboat to an island in Bangladesh and met a 3-year-old […]

Exploring our curiosity at TEDNYC: What Drives Us

We’re creatures of curiosity. Our impulse to explore and investigate has led us to incredible discoveries about the world around us and about ourselves. Despite our amazing advances, questions still abound: How might we change, mold or reshape our nature and behavior? What inspires us to take action? What shifts our motivations? How do we […]

What is a “smart” syringe? By 2020, you’ll be getting all your shots with one

In the small village of Roka in western Cambodia, 272 people have tested positive for HIV since the end of 2014. Among those diagnosed: an 82-year-old celibate Buddhist monk, several babies and 19 members of the same family. This tragic outbreak has been traced to a source: Yem Chrin, a popular medical practitioner who operated […]

Around 39 million people in the world are affected by blindness — 80% of which could be avoided if people had timely access to diagnosis and proper treatment. The problem is that in many developing countries, most eye care providers are in cities, while the majority of patients live in hard-to-reach rural areas. To bridge this gap, London-based opthalmologist Andrew Bastawrous created Peek — an app […]

A class of medical students thinks “upstream,” thanks to the gift of a book

Before Jackie Hodges arrived for orientation at Tufts University School of Medicine, she got a gift from her soon-to-be med school: a free download of the e-book The Upstream Doctors by Rishi Manchanda. In this book, Manchanda — who has worked for a decade as a doctor in community clinics around South Central Los Angeles […]

Imagination in health and medicine? 11 fresh ideas from the TEDMED stage

Prosthetics as sculpture, the maternal benefits of breast milk, Cuba’s radical approach to free medical education. These are just a few of the subjects tackled at TEDMED 2014: Unlocking Imagination, hosted last week simultaneously in San Francisco and Washington, DC, with a stage program directed by TED Fellow, physician, novelist and activist Nassim Assefi. On two stages […]

What we know about autism: Wendy Chung at TED2014

Wendy Chung of the Simons Foundation Autism Research Initiative says that she is constantly asked the same question by parents: “Why does my child have autism?” It’s a question that plagues them whether their child has a severe form of autism, to the point of being non-verbal, or a mild one. “Autism isn’t a single condition. It’s […]

Stephen Friend wants your genes — no, really. Today at TED2014 he announced  the Resilience Project, a new crowdsourced effort to understand the quirks and patterns of human genetic code that control — and could help treat — genetic diseases. Thirty years ago, the open-science advocate was working as a pediatric oncologist at the Children’s […] 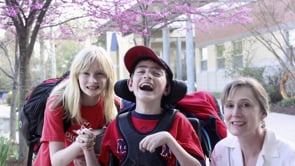 How to grow a bone without a body

[youtube http://www.youtube.com/watch?v=3_lk4Q-2x8I&w=560&h=315%5D This video features the work of TED Fellow Nina Tandon and Sarindr Bhumiratana, her colleague at Columbia University’s Laboratory for Stem Cells and Tissue Engineering and partner-in-new-business-crime. Together with a group of fellow bio-engineers, the pair recently founded the company, Epibone, which they describe as “a revolutionary bone reconstruction company that allows patients […]

No more needles? 7 ways scientists are attempting to move beyond shots

My needle phobia goes back to when I was 5 years old. I was at the doctor’s office with my younger sister, Lizz, when our doctor had a brilliant idea: “Why don’t we give Kate her shot first so Lizz can see how easy it is?” I was fine being asked to play the part […]

Finally, make sense of your drug info: A first look at a company inspired by a TED Talk

Execution. A word that gives me the willies not because I picture a Westerosi royal beheader coming for my neck, but because it conjures images of budgets and bottom lines. Seriously, why can’t I just think for a living? When you live in a world of ideas, turning passion into a product is no easy […]

Illuminating an illness without end: Fellows Friday with Jennifer Brea

Three years ago, Jennifer Brea, then a PhD student in political science, was struck down by what appeared to be a severe flu. It turned out to be the beginning of a long illness — including neurological dysfunction and extreme exhaustion — that she has yet to recover from. Discovering that the medical community did […]