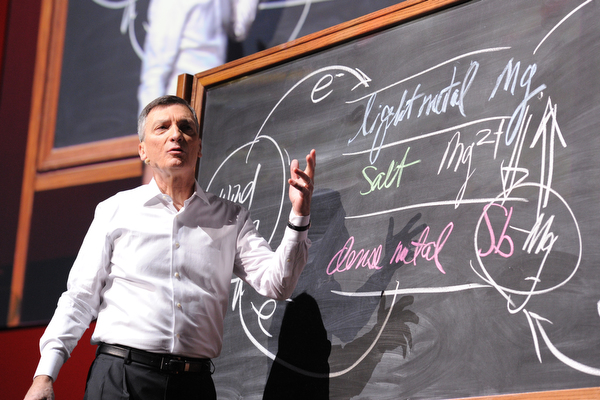 “The electricity powering the lights in this theater was generated just moments ago,” says MIT professor, Donald Sadoway, now on stage at TED2012 to talk power. “The way things stand, electricity demand must be in balance with electricity supply.” The problem is: coal and nuclear plants can’t address demand fast enough. How do we deal with the problem of intermittency?

Realizing the critical importance of the humble battery as a way to help with the energy crisis — and that, nonetheless, there is simply “no battery technology capable of meeting the demanding performance requirements of the grid,” Sadoway started to think differently. “We need to abandon the paradigm of chasing the coolest chemistry to chase down the cost curve by making lots of products,” he says. Instead, he wanted to invent to the pricepoint of the electricity market. “If you want to make something dirt-cheap, make it out of dirt. Preferably dirt that’s locally sourced.” He also decided to be seemingly perverse in his hunt for potential electricity storage, looking at a source that neither generates nor stores electricity but in fact consumes huge amounts of it: aluminum production.

And that’s how and why he discovered a way to sandwich necessary salts with both high- and low-density metals to harness the potential of aluminum smelting in the name of creating an electricity storage device. He didn’t necessarily think it would work — nor did any of his students, those he gathered to share in his “passion for science in the service of society, not science in service of career building.” Cutely, he paraphrases JFK at Rice University in 1962: “we choose to work on gridlevel storage not because it is easy but because it is hard.”

Yet, to date they have enjoyed some serious success, and have already developed various liquid batteries, from the “shotglass” up to the 16-inch “pizza”, which produces one kilowatt-hour of energy. The 36-inch-wide “Bistro Table” is not yet ready for prime time, but a future variant is designed to produce the daily electrical needs of 200 American households with a battery that is “silent, emissions free, has no moving parts, is remotely controlled, and is designed to the market price point, without subsidy.” Cue applause.