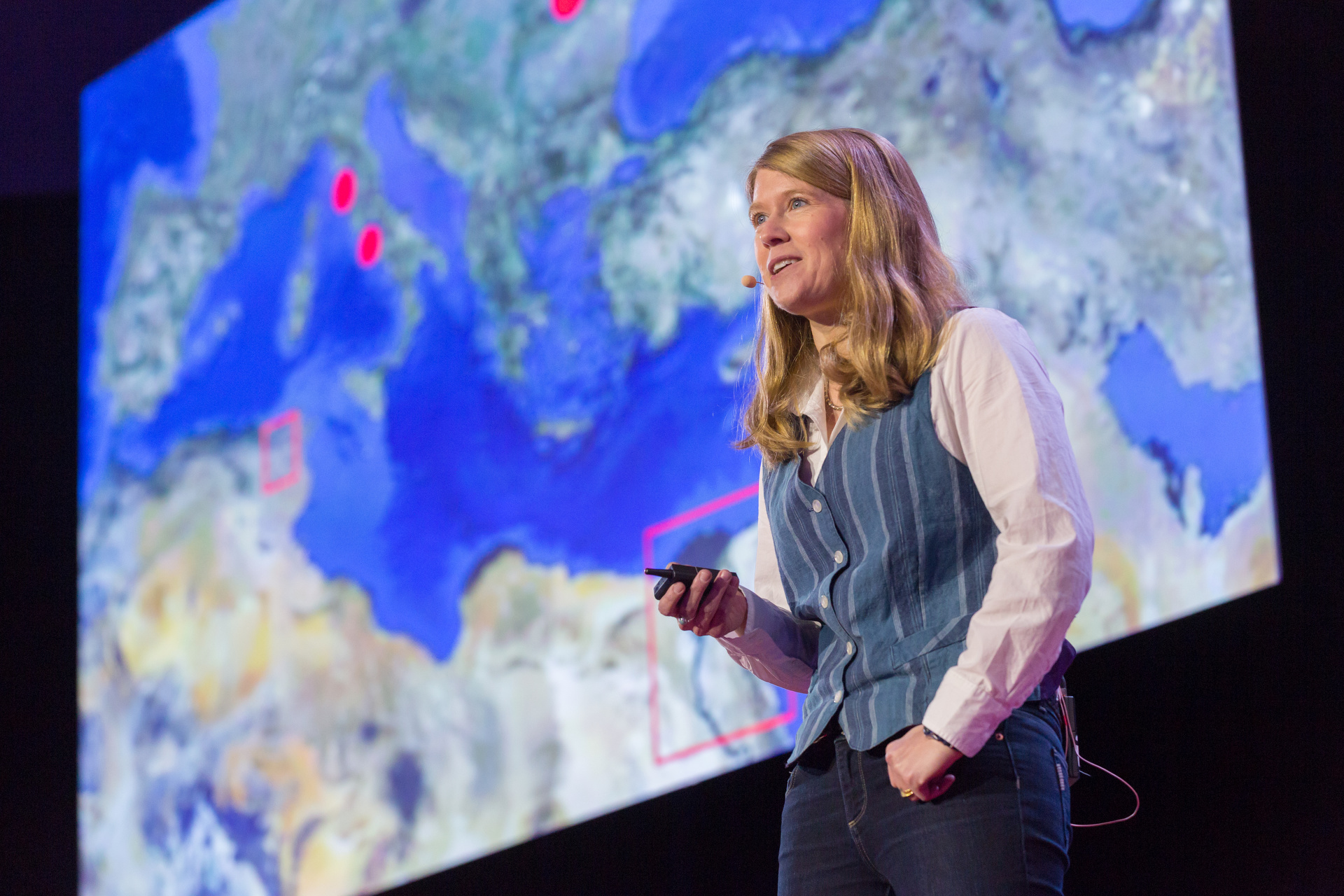 Fast-forward 20, 50, or even 100 years into the future — what will our lives be like? Will flying cars and 3D-printed dinners be the norm, or will they remain mostly science fiction? On Saturday, November 14, kids and teens from all five boroughs of New York City explored these possibilities at the Brooklyn Museum. With 27 speakers and performers, the audience got a glimpse of what could be “Made in the Future” with questions like:

How will we live with robots?

Can we use microbes to cure diseases?

What will the next jobs be?

Hosted by Kelly Stoetzel, TED’s content director, and Rives, a professional poet, each session had fascinating insights on what’s to come. Below are highlights from each one:

“We need to re-analyze almost every archeological site in the world.”

— Sarah Parcak is a “space archeologist” who studies satellite images, looking for clues to long-buried history. And there’s more of it than anyone expected, she says: “Everywhere we look, we find new settlements, new temples, even potential pyramids.” Parcak, who’s a TED Fellow, this week won the TED Prize, a $1 million gift to kick off a great big project. Because, as she says, “We have barely scratched the surface of what we know about the past.”

“With advanced computing, and how developed our internet is, it’s the golden era of innovation.”

— Inventor Raymond Wang wants to stop worldwide disease epidemics — starting by cleaning up the air that people breathe on planes. Using a virtual 3D mockup of an airplane cabin and “a whole bunch of physics,” he created a better method of circulating air in a way that will keep passengers’ germs from spreading after a nasty sneeze. This won him the top prize at the Intel Science and Engineering Fair – and could someday reduce transmission of sickness between passengers by 190%.

“You can use math to exchange secrets.”

— Online, our personal data is always vulnerable to hackers. So what protects your credit card number when you want to buy something online? Encryption, the act of encoding information so that the sender and receiver can decode it, but someone who might be listening in doesn’t have a clue. Computer security expert Avi Rubin shows us the math behind how encryption works, illustrating the important concepts in mathematics that protect us every day.

“I don’t know how the future will look like, which means that I can imagine it — and I can create it.”

— From levitating objects to guessing the exact  secret word that an onstage volunteer has in her mind, mentalist Gerard Senehi can’t explain how he does what he does. Even further, he says, even though he can’t predict how the world will be like in even five years, “What’s important is to make room for what’s possible.” 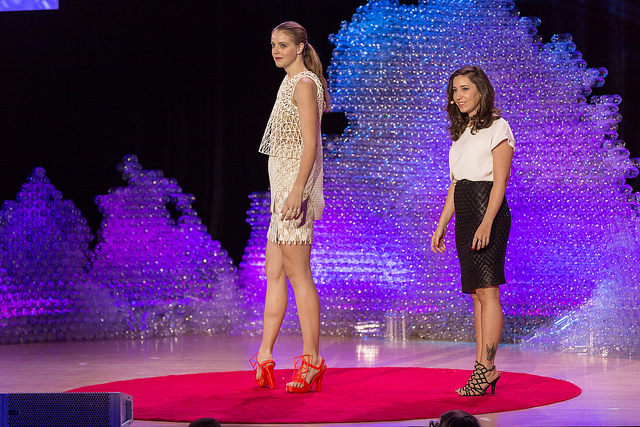 “Fashion is a very physical thing, and I wonder how our world will look like when our clothes will be digital.”

— Downloadable, printable clothing may be coming to a closet near you. What started as designer Danit Peleg’s fashion school project turned into a collection of 3D-printed designs that have the strength and flexibility for everyday wear.

“The internet of food is being planted right now. Start hacking it.”

— Skip the grocery store lines, and start growing your own food — even if you don’t have a garden. Caleb Harper, director of CitiFARM at the MIT Media Lab, gave the audience a literal breakdown of his “food computer,” a small hydroponic greenhouse that’s connected to the web to exchange data for optimum growing.

“If you give doctors detailed performance data about how they’re doing, you can help them be the best they can be.”

— Surgeon Carla Pugh wants to help doctors improve their medical examinations and procedures. She and her team have built some amazing model body parts that help doctors practice sensitive exams without hurting real humans — and also help them get better and better at what they do.

Marian Hill, a Philadelphia songwriter duo-plus-sax, brought their cool, hip-hop influenced vocals and some very energetic sampling to their hit song “One Time” to close out the Session and send everyone off to lunch — and a chance to meet the speakers in person.

— Jessica Brillhart is the principal filmmaker at Jump, Google Cardboard’s new technology that films in 360 degrees. In a live demo, she jumps from a train in Japan to the Eiffel Tower in Paris through virtual reality, showing the audience the new interactive future of storytelling.

“If you’re going to invent things for the future, it’s very important to have your hands on the technology to understand it intuitively.”

—  As a “maker-futurist,” Carla Diana designs products that bring tomorrow’s technology into homes everywhere. With her accessible, downloadable designs, Diana creates products, like books with 3D-printable illustrations and a robotic lamps that nudge you awake, that make life more practical and whimsical.

“In the future, rather than taking a data set and first calculating the mean, median and mode, we’ll say, ‘Welcome to the data room.’”

—  A bell rings and a ceasefire is signed; a note sounds, signaling a massacre. Jen Ziemke, an expert on the decades-long Angolan Civil War, turns conflict data from cells on a spreadsheet into visceral, interactive experiences.

“It wasn’t until I let myself be wrapped in the dizzying embrace of chaos that I found peace in leaving some messes untidied and some questions unanswered.”
—  Anna Kaufman used to obsessively order and structure her life. But when her sister received a devastating and incomprehensible diagnosis, she realized that embracing chaos is a great way to find inner peace — and spark creativity.

“If you can dream it, you can do it. The possibilities are limitless.”

—  As a Disney Imagineer, Betsy McIver-Cho uses cutting-edge engineering technology to help park guests engage with fantastical characters and stories. Along with sneak peeks of upcoming attractions, Cho shares the challenges and triumphs of making magic.

The father-daughter beatboxing duo Nicole Paris & Ed Cage battled it out onstage with overlapping, complex, electronic-sounding beats. Ed tells us that beatboxing began right here in New York City, when people would emulate the beats of a DJ at parties for rappers to freestyle over. Then Nicole shows us where the art of beatboxing is heading next– followed by an epic beatbox jam. 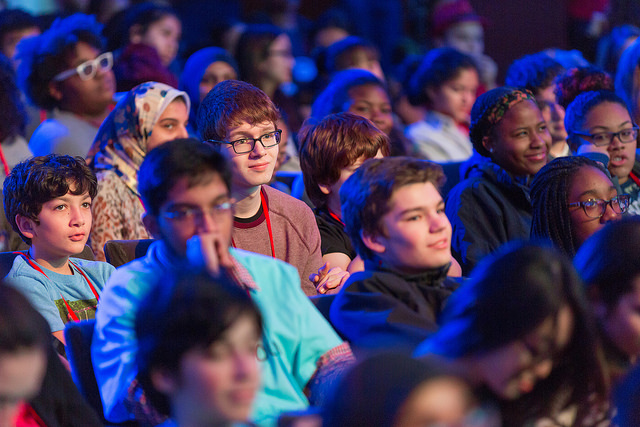 The TEDYouth audience ponders what could be “Made in the Future”. Photo: Ryan Lash/TED

“We have co-evolved, as humans, with microbes that are now a part of us.”

—  Over 100 trillion tiny microbes live in the human gut alone, and are spread all over and inside the body. Elaine Y. Hsiao studies how our microbes influence the brain and behavior and could, someday, be used to treat diseases.

“I wanted to see something warm and fuzzy and soft and human on the cold steel-framed facade that I looked at every day.”

—  Street artist Magda Sayeg transforms urban landscapes into her own playground with warm, fuzzy “yarn bombs” by decorating everyday objects with colorful knit and crochet works. She explains that everyone has the hidden power to create change around them.

“The thing about rumors is, the funnier they are, the more likely they are to fester and stick.”

— Rumors can be deeply damaging, says high school senior Parker Goldstein. As a victim of harsh rumors himself, Goldstein wants people to know how their words can have a lasting effect on others. He challenges us all to fight our human impulse to fit in, when the price is hurting our friends and peers. 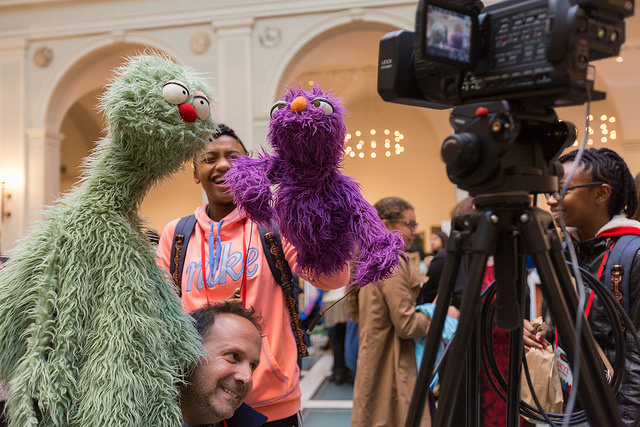 “A puppeteer is part magician.”

— In an improv class in college, says Joey Mazzarino, an employee from the show Sesame Street came in to speak. And he was hooked. Twenty years later, he’s sharing his own puppet designs, insider tricks and fun characters, in a talk that encourages the audience to follow their passion, no matter how off-beat it may be.

— Mike Ebeling loves to take on the impossible, helping one person at a time. When he heard the story of Daniel, a young boy whose arms were blown off by an airstrike in the Sudan, he faced this impossible challenge by creating the world’s first 3D-printed prosthetic lab, helping Daniel’s community in Sudan to design and build limbs for him and then for more and more people. He encouraged the audience to change the world through starting small, then going big — not the other way around.

Closing the day with Session 3:

“There should be nothing that stops a young person from experimenting with their goals and dreams. We do not need to wait for a future time to do what we want.”

“To keep up with current rate of climate change, trees would have to migrate several miles per year.”

— Sally Aitken studies trees (her favorite is the white-bark pine) and how they are reacting to our climate change. Animals, she points out, can migrate when climates change — but trees are stuck in one place. She hopes her work will help us figure out how to adapt better trees for our changing climates.

“What really matters is the story inside, the story that will capture the reader and make them fly thousands of meters away from the ground to a place only books can take you.”

— As long as the passion for the story is there, says avid reader and book-blogger Marta Botet Borràs, the packaging doesn’t matter. She shares how her love for reading turned into the first YouTube channel to review books in the Catalan language.

“Can we have fewer cars and more humans?”

— As cities expand and populations surge, it’s time to rethink how we get around. Sharing ideas such as a bicycle wheel that amplifies human motion, Carlo Ratti and Assaf Biderman shared their passion for urban mobility with fewer cars and more fun.

“We know a lot more about space than we do about the underground water resources on our planet, the very lifeblood of Mother Earth.”

— Cave diver Jill Heinerth is an aquanaut, exploring the mysteries of underwater caves in rocks and ice to learn how they function. Underwater caves hold much of the water we humans drink, so  it’s important that we understand our connection to these important natural resources. 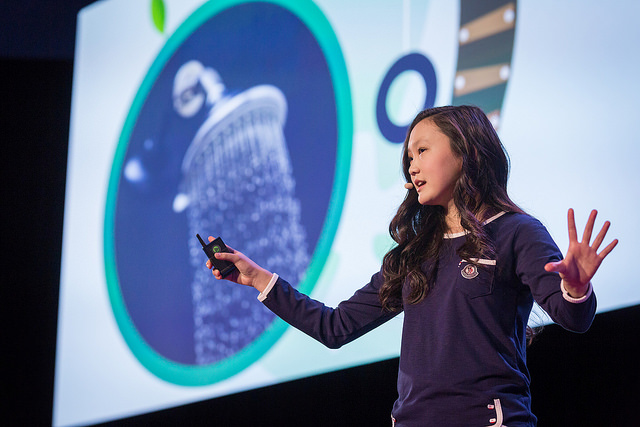 Youth speaker Chelsea Ha wants kids to realize that they can help save the environment. Photo: Ryan Lash/TED

“Adults right now are doing a magnificent job of promoting sustainability, but we will be the ones to take charge next.”

— With water shortages and rising temperatures, saving the environment can seem like an endless challenge. However, environmentalist Chelsea Ha believes that kids are problem solvers who, through everyday actions like switching to LED lightbulbs and reusing grocery bags, can save planet earth.

“Take it back to the soulful era.”

“You have to travel along the road of wrong to find right.”

— Adam Steltzner led the team that landed the rover Curiosity on Mars. The secret to his success? Failing repeatedly, until those failures illuminated the right solution at the right time. He encourages the audience to similarly embrace what they can learn from failure in anything they do.

You can watch the archive livestream of TEDYouth 2015 until Wednesday, Nov. 18, at tedyouth.com. 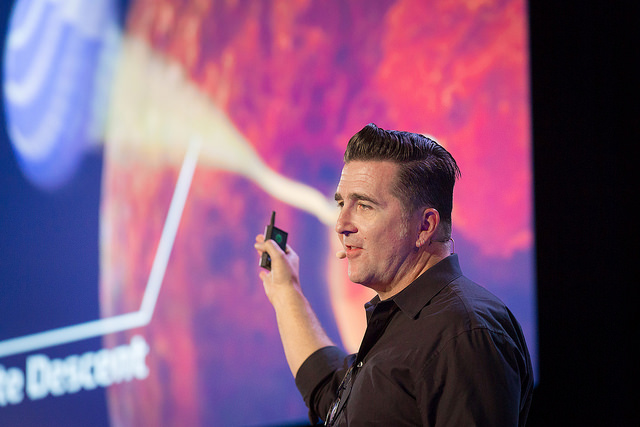 Adam Steltzner says that when he and his team at NASA landed a rover on Mars, they had to fail again and again before they figure out how to get it right. Photo: Ryan Lash/TED