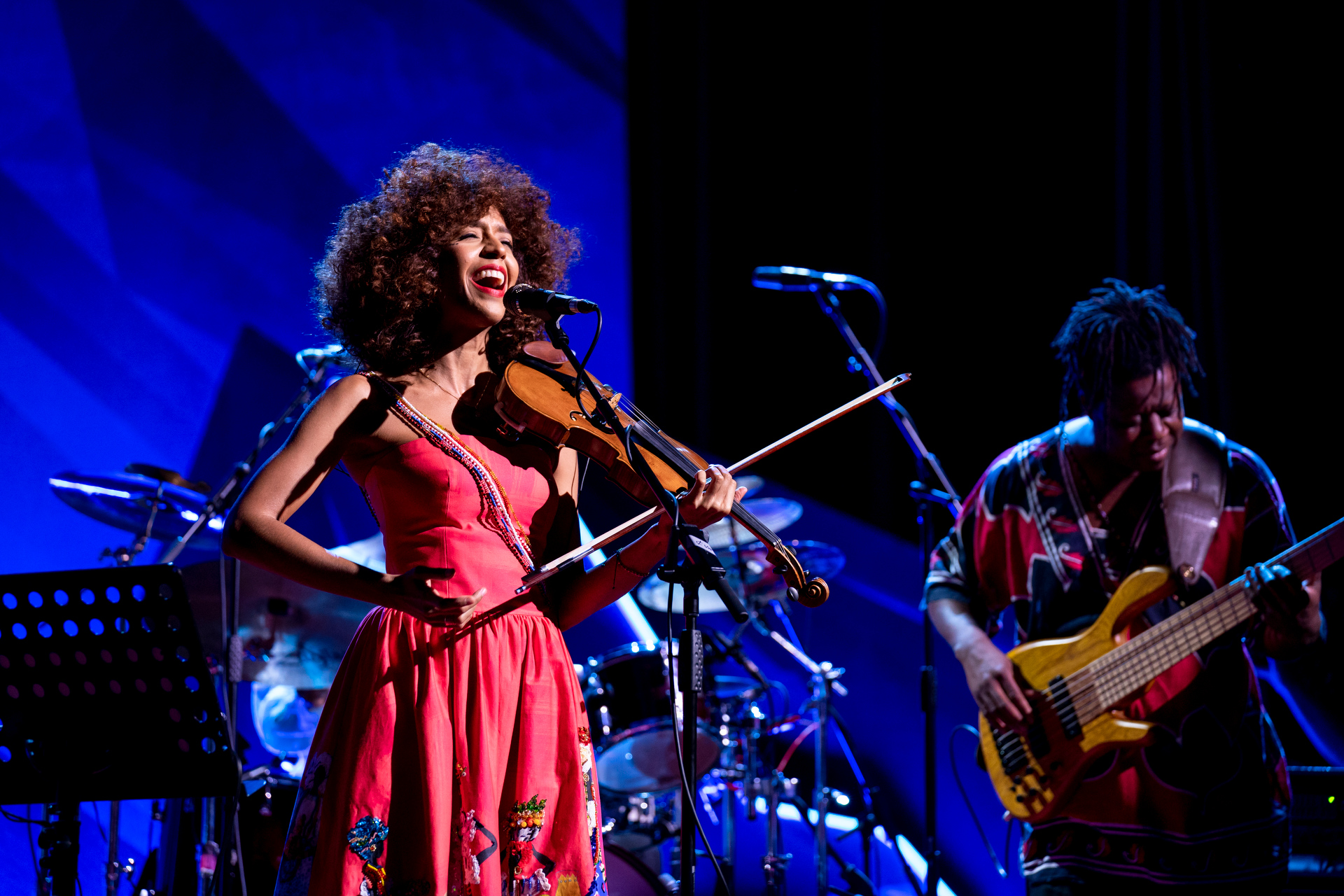 Yilian Cañizares rocks the TED stage with a jubilant performance of her signature blend of classic jazz and Cuban rhythms. She performs at TEDSummit: A Community Beyond Borders, July 24, 2019, in Edinburgh, Scotland. (Photo: Bret Hartman / TED)

The penultimate session of TEDSummit 2019 had a bit of everything — new thoughts on aging, loneliness and happiness as well as breakthrough science, music and even a bit of comedy.

When and where: Wednesday, July 24, 2019, 5pm BST, at the Edinburgh Convention Centre in Edinburgh, Scotland

Opening: Raconteur Mackenzie Dalrymple telling the story of the Goodman of Ballengeich

Music: Yilian Cañizares and her band, rocking the TED stage with a jubilant performance that blends classic jazz and Cuban rhythms

Comedy: Amidst a head-spinning program of big (and often heavy) ideas, a welcomed break from comedian Omid Djalili, who lightens the session with a little self-deprecation and a few barbed cultural observations 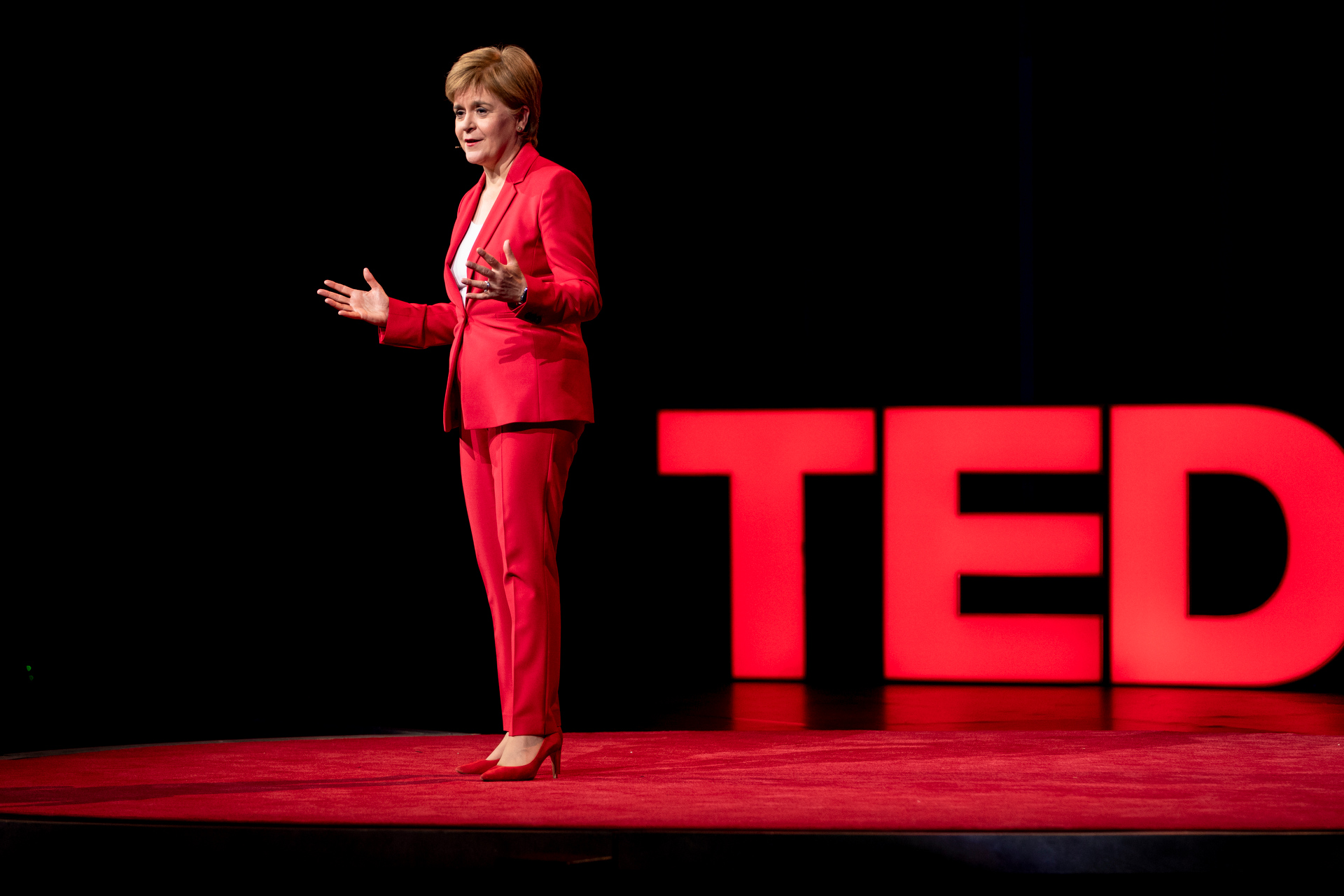 “In the world we live in today, with growing divides and inequalities, with disaffection and alienation, it is more important than ever that we … promote a vision of society that has well-being, not just wealth, at its very heart,” says Nicola Sturgeon, First Minister of Scotland. She speaks at TEDSummit: A Community Beyond Borders, July 24, 2019, in Edinburgh, Scotland. (Photo: Ryan Lash / TED)

Big idea: It’s time to challenge the monolithic importance of GDP as a quality-of-life metric — and paint a broader picture that also encompasses well-being.

How? In 2018, Scotland, Iceland and New Zealand established the Wellbeing Economy Governments group to challenge the supremacy of GDP. The leaders of these countries — who are, incidentally, all women — believe policies that promote happiness (including equal pay, childcare and paternity rights) could help decrease alienation in its citizens and, in turn, build resolve to confront global challenges like inequality and climate change.

Big idea: Parents often view technology as either a beacon of hope or a developmental poison, but the biggest influence on their children’s life choices is how they help them navigate this unavoidable digital landscape. Society as a whole can positively impact these efforts.

How? Sonia Livingstone’s own childhood was relatively analog, but her research has been focused on how families embrace new technology today. Changes abound in the past few decades — whether it’s intensified educational pressures, migration, or rising inequality — yet it’s the digital revolution that remains the focus of our collective apprehension. Livingstone’s research suggests that policing screen time isn’t the answer to raising a well-rounded child, especially at a time when parents are trying to live more democratically with their children by sharing decision-making around activities like gaming and exploring the internet. Leaders and institutions alike can support a positive digital future for children by partnering with parents to guide activities within and outside of the home. Instead of criticizing families for their digital activities, Livingstone thinks we should identify what real-world challenges they’re facing, what options are available to them and how we can support them better.

Big idea: Violence against children is an endemic issue worldwide, with rates of reported incidence increasing in some countries. We are at a historical moment that presents us with a unique opportunity to end the epidemic, and some countries are already leading the way.

How? Howard Taylor draws attention to Sweden and Uganda, two very different countries that share an explicit commitment to ending violence against children. Through high-level political buy-in, data-driven strategy and tactical legislative initiatives, the two countries have already made progress on. These solutions and others are all part of INSPIRE, a set of strategies created by an alliance of global organizations as a roadmap to eliminating the problem. If we put in the work, Taylor says, a new normal will emerge: generations whose paths in life will be shaped by what they do — not what was done to them.

Quote of the talk: “What would it really mean if we actually end violence against children? Multiply the social, cultural and economic benefits of this change by every family, every community, village, town, city and country, and suddenly you have a new normal emerging. A generation would grow up without experiencing violence.” 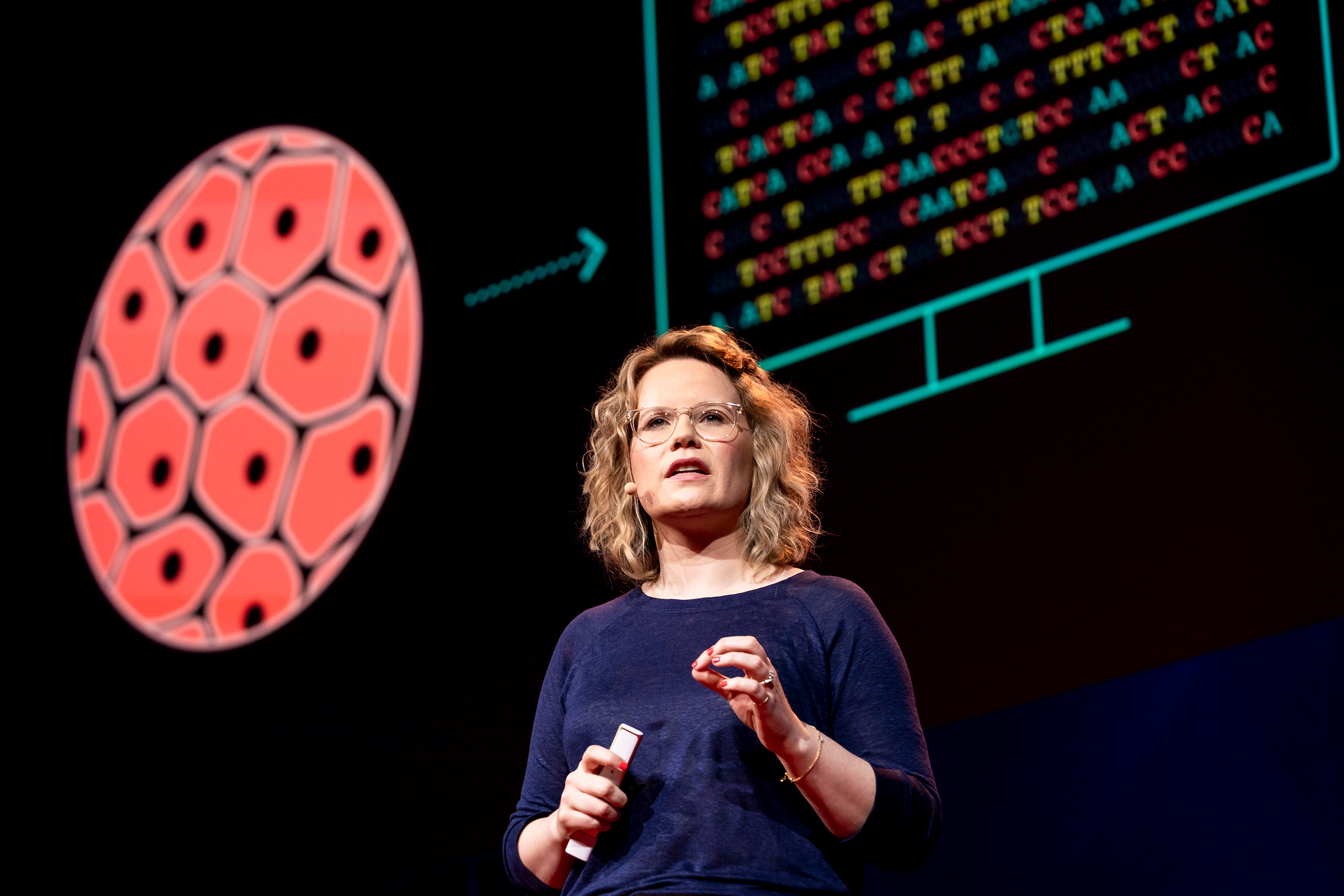 “The first half of this century is going to be transformed by a new software revolution: the living software revolution. Its impact will be so enormous that it will make the first software revolution pale in comparison,” says computational biologist Sara-Jane Dunn. She speaks at TEDSummit: A Community Beyond Borders, July 24, 2019, in Edinburgh, Scotland. (Photo: Ryan Lash / TED)

How? By studying how embryonic stem cells “decide” to become neurons, lung cells, bone cells or anything else in the body, Sara-Jane Dunn seeks to uncover the biological code that dictates cellular behavior. Using mathematical models, Dunn and her team analyze the expected function of a cellular system to determine the “genetic program” that leads to that result. While they’re still a long way from compiling living software, they’ve taken a crucial early step.

Quote of the talk: “We are at the beginning of a technological revolution. Understanding this ancient type of biological computation is the critical first step. And if we can realize this, we would enter into the era of an operating system that runs living software.”

Big idea: We need to recognize the complexity of loneliness and its ever-transforming history. It’s not just an individual and psychological problem — it’s a social and physical one.

Why? Loneliness is a modern-day epidemic, with a history that’s often recognized solely as a product of the mind. Fay Bound Alberti believes that interpretation is limiting. “We’ve neglected [loneliness’s] physical effects — and loneliness is physical,” she says. She points to how crucial touch, smell, sound, human interaction and even nostalgic memories of sensory experiences are to coping with loneliness, making people feel important, seen and helping to produce endorphins. By reframing our perspective on this feeling of isolation, we can better understand how to heal it.

Quote of talk: “I am suggesting we need to turn to the physical body, we need to understand the physical and emotional experiences of loneliness to be able to tackle a modern epidemic. After all, it’s through our bodies, our sensory bodies, that we engage with the world.”

Fun fact: “Before 1800 there was no word for loneliness in the English language. There was something called: ‘oneliness’ and there were ‘lonely places,’ but both simply meant the state of being alone. There was no corresponding emotional lack and no modern state of loneliness.” 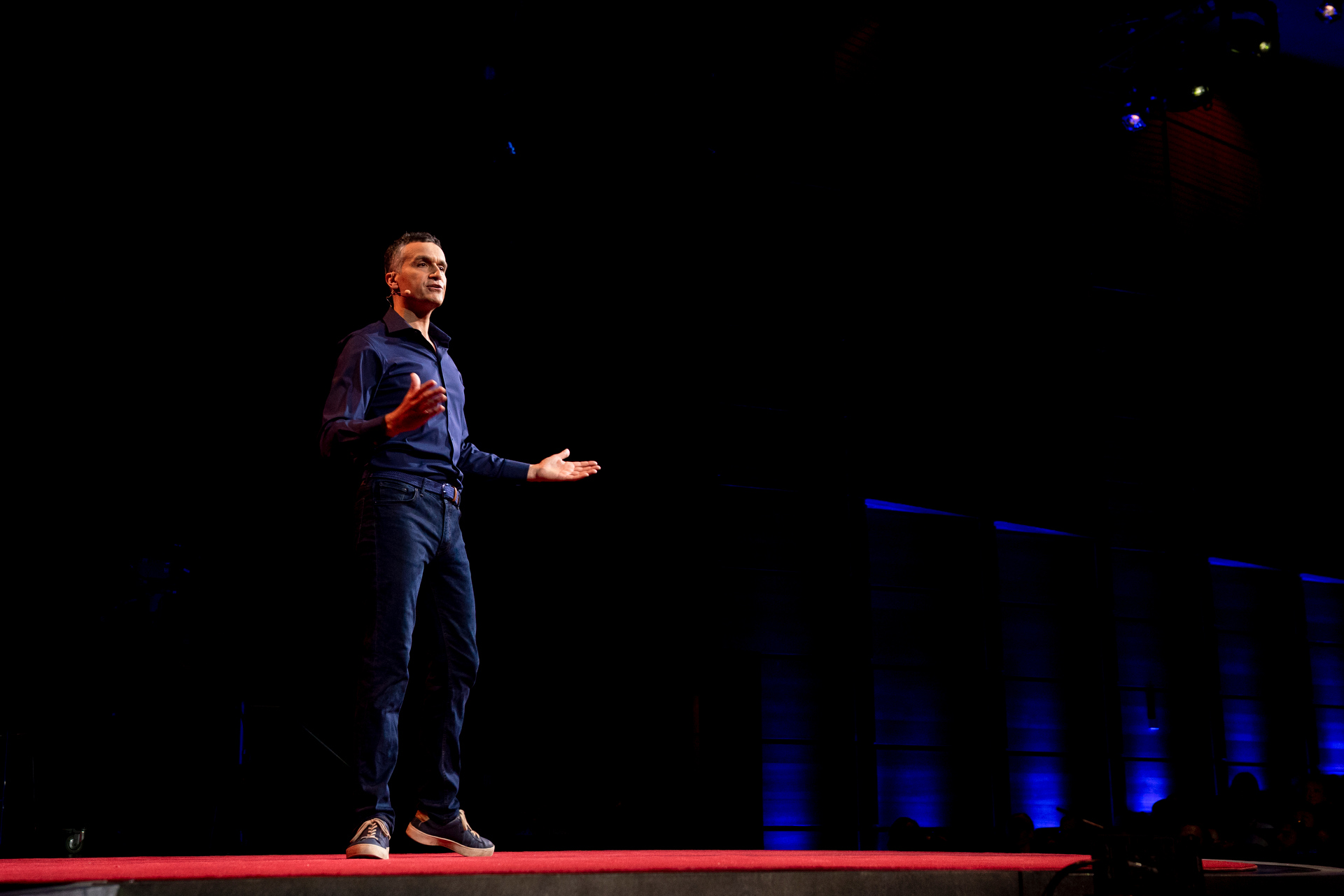 “Whatever age you are: own it — and then go out there and show the world what you can do!” says Carl Honoré. He speaks at TEDSummit: A Community Beyond Borders, July 24, 2019, in Edinburgh, Scotland. (Photo: Bret Hartman / TED)

Big idea: Stop the lazy thinking around age and the “cult of youth” — it’s not all downhill from 40.

How? We need to debunk the myths and stereotypes surrounding age — beliefs like “older people can’t learn new things” and “creativity belongs to the young.” There are plenty of trailblazers and changemakers who came into their own later in life, from artists and musicians to physicists and business leaders. Studies show that people who fear and feel bad about aging are more likely to suffer physical effects as if age is an actual affliction rather than just a number. The first step to getting past that is by creating new, more positive societal narratives. Honoré offers a set of simple solutions — the two most important being: check your language and own your age. Embrace aging as an adventure, a process of opening rather than closing doors. We need to feel better about aging in order to age better.

Quote of the talk: “Whatever age you are: own it — and then go out there and show the world what you can do!”