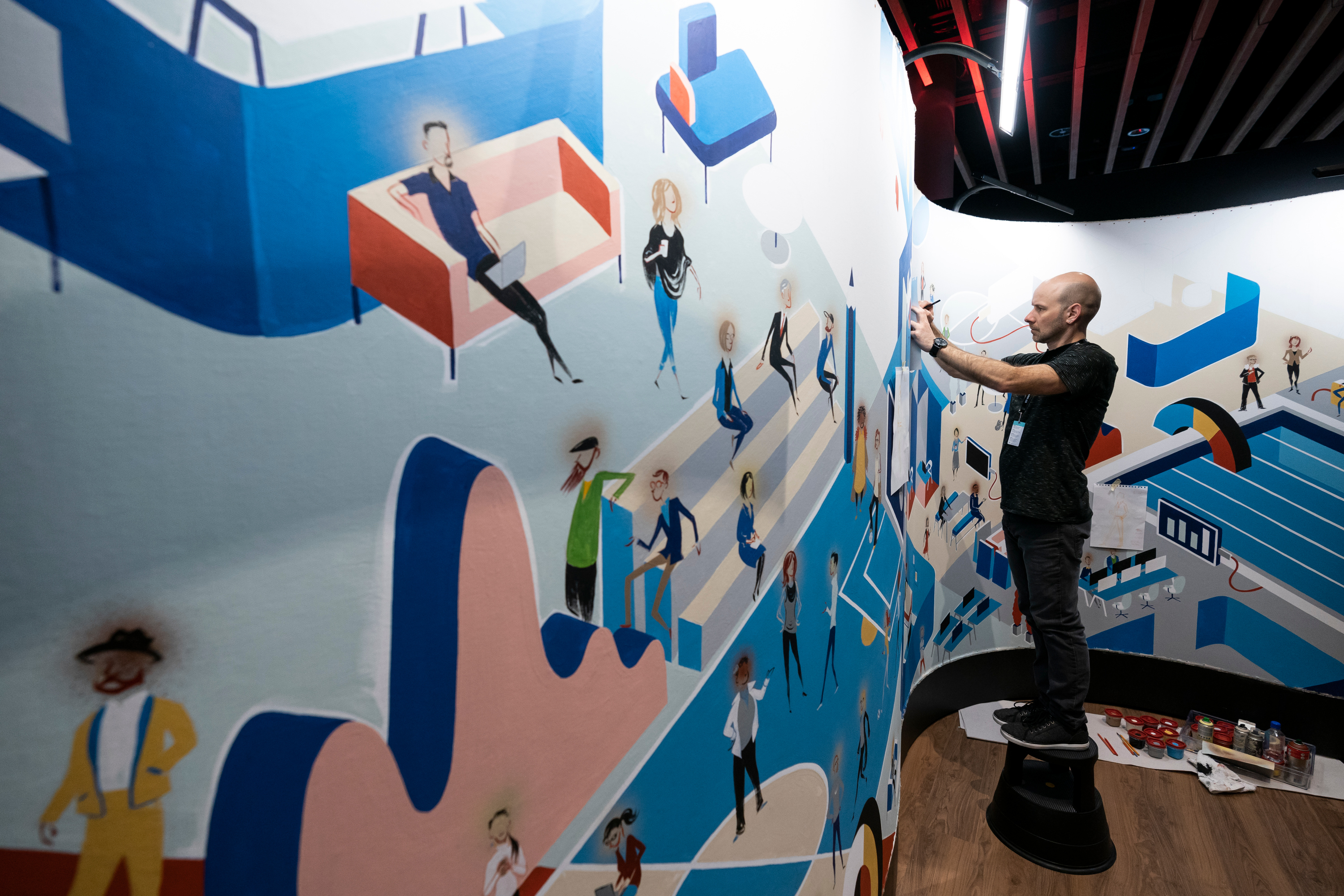 Over the week of TED, artist Milt Klingensmith co-created a mural featuring the images of TEDsters interacting in a sports-inflected workplace inspired by Steelcase. Klingensmith and co-artist Jody Williams worked at TED2019: Bigger Than Us, April 15–19, 2019, Vancouver, BC, Canada. Photo: Ryan Lash / TED

Every day at every workplace around the world, employees engage in a ballet. Each of us has a role to play, and we alternate between solo moments and collaborative interludes, between scripted choreography and improv. While the members and the steps may change over time, as long as the business continues, the ballet goes on.

Well, if work is a dance, then you might think of Steelcase — a US company that creates furniture for offices, hospitals and classrooms — as a production designer. To the people at Steelcase, the workplace is not a static setting but one that’s as dynamic as the employees themselves. They’re always asking: “What are the patterns, rhythms and trends emerging in the business world?” and “How can we take this information and use it to help people perform at their best?”

For its 2019 Active Collaboration Study, the company spent more than two years surveying and observing over 3,000 office workers in Australia, France, Germany, Japan, UK and US. Respondents told them they spent half their time in group interactions but felt constrained: 72 percent said they want to move when collaborating but only 53 percent can; 54 percent want to rearrange their furniture, yet just 38 percent can.

For TED2019 in Vancouver, Steelcase has created an exhibit that captures an idealized solution to these difficulties and goes one delightful step further: it places attendees in this imaginary world. However, unlike the Vulcan Holodome (also at the conference) which puts people into Monet paintings thanks to advanced 4K projectors, this is a strictly analog affair. Starting with the opening of the conference on Monday, Michigan artists Jody Williams and Milt Klingensmith have been painting a mural to which they’re adding willing TEDsters.

The painting is a colorful fusion of streamlined Scandinavian design, the humanity-filled feel of folk art, and athletic tropes — it’s as if Grandma Moses and Eero Saarinen got married and became rabid sports fans. Steelcase has been a TED partner for 25 years, and brand events manager Cindy McDonagh says, “We always like to interact with attendees in very personal ways. Given that everyone is at some point involved in teaming or collaboration, we decided to engage them in the story visually and make it very personal to them.”

Interestingly, while collaboration was chosen by Steelcase to be the theme of the mural, it’s taken on a life of its own. For starters, the attendees and artists must constantly interact. TEDsters sit or stand for a minute or so — all that Klingensmith needs to sketch them — and later they return to look for themselves in the piece. While Klingensmith has never done this kind of live work before, he used to regularly walk to a cafe near his home and do on-the-spot drawings of passersby. “I just love drawing human forms,” he says. “This has been a dream job.”

People happily chat as they’re being sketched, and a few have had specific requests. One person wanted to be depicted standing on a table; another asked that his painted self look heavier (!). The artists have noticed the mural is bringing people together off the canvas, since attendees like to come in groups.

Then there’s the synergy between the artists. While Klingensmith is focused on capturing the people, Williams is filling in the setting. The two are actually old friends from college, but they hadn’t spoken for a decade until Williams was hired for the project and thought that Klingensmith would be the ideal teammate. Williams says, “Milt and I have been getting together for the last few Saturdays to discuss questions like, How are we going to do this? What colors of paint should we use?”

The mural is infused with whimsy — for example, this workplace has bleachers and a soccer field, a nod to the theme. Says Steelcase senior communication specialist Audra Hartges, “Work today is more like a soccer game where it’s really dynamic, there are lots of moving parts, and there’s lots of interactivity between people.” Yet it has realistic elements, with plenty of individual desks and coworking spaces. Look closely, and you’ll see a scattering of Steelcase pieces, such as the Oculus chair and the Umami bench,  throughout. (In response to the opinions captured in its study, Steelcase has just launched some real-life products including Flex, a line of moveable desks, tables, whiteboards, carts, space dividers and accessories, and a Roam stand for Microsoft’s Surface Hub2S.)

While the mural will be taken down and rolled up when TED2019 concludes, it may go on to have a second life. There’s the possibility of it being displayed at Steelcase HQ in Grand Rapids, Michigan, where it can serve as a sweet, graphic reminder of this moment of teamwork and the inspiring backdrop of collaborations to come. 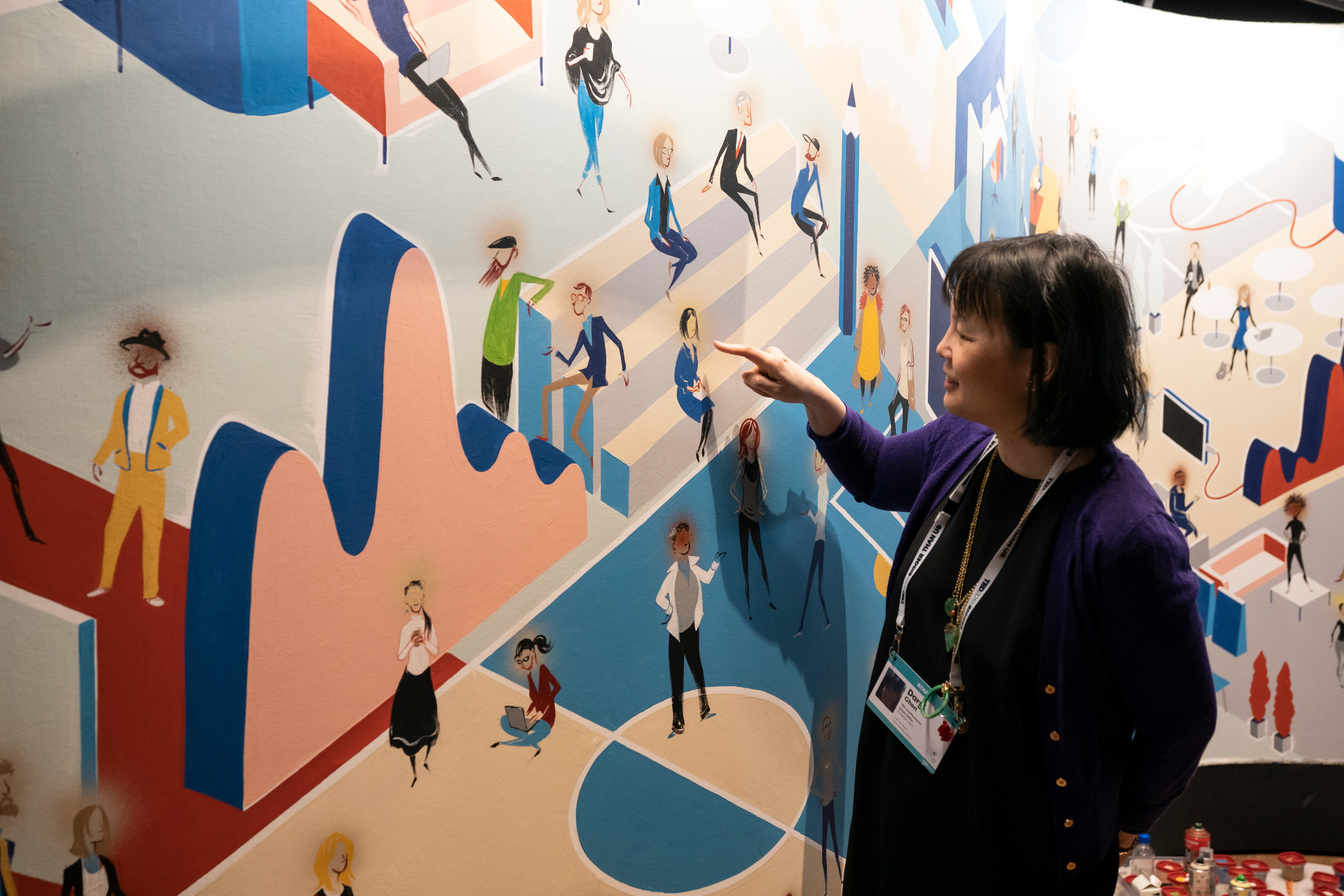