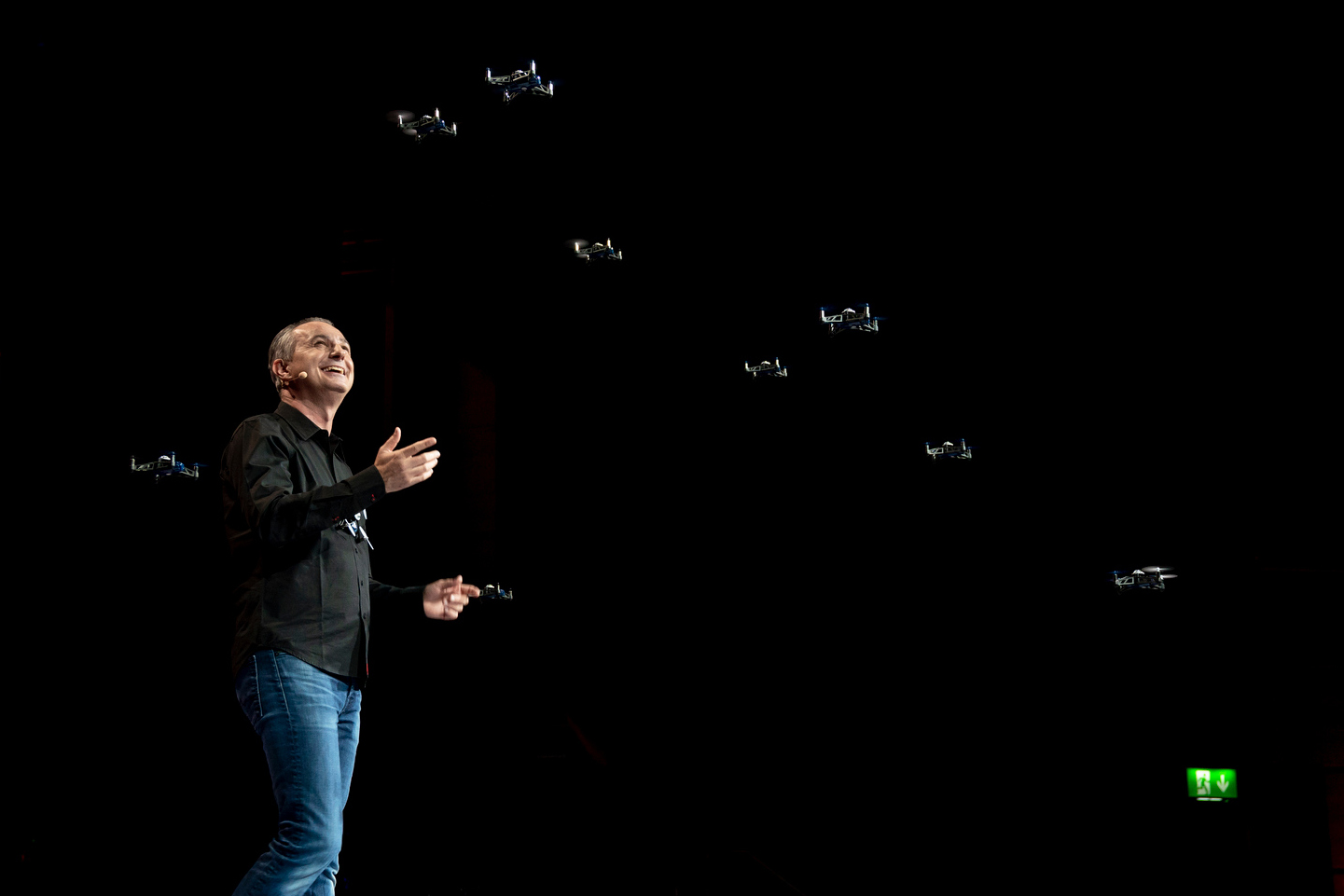 Marco Tempest and his quadcopters perform a mind-bending display that feels equal parts science and magic at TEDSummit: A Community Beyond Borders, July 23, 2019, in Edinburgh, Scotland. (Photo: Bret Hartman / TED)

In an incredible session, speakers and performers laid out the biggest problems facing the world — from political and economic catastrophe to rising violence and deepfakes — and some new thinking on solutions.

When and where: Tuesday, July 23, 2019, 5pm BST, at the Edinburgh Convention Centre in Edinburgh, Scotland

Music: KT Tunstall sharing how she found her signature sound and playing her hits “Miniature Disasters,” “Black Horse and the Cherry Tree” and “Suddenly I See.” 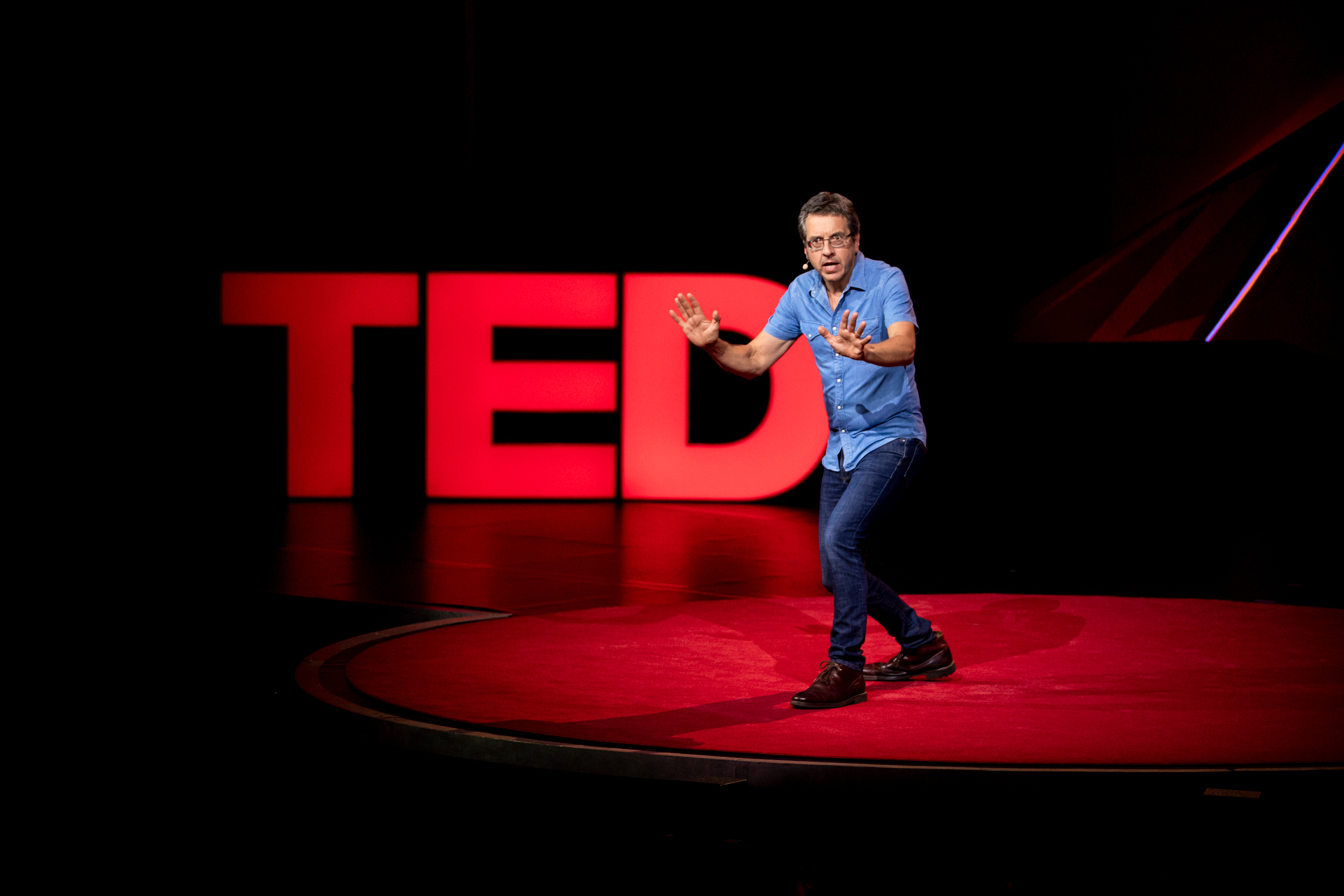 “We are a society of altruists, but we are governed by psychopaths,” says George Monbiot. He speaks at TEDSummit: A Community Beyond Borders, July 23, 2019, in Edinburgh, Scotland. (Photo: Ryan Lash / TED)

Big idea: To get out of the political mess we’re in, we need a new story that captures the minds of people across fault lines.

Why? “Welcome to neoliberalism, the zombie doctrine that never seems to die,” says George Monbiot. We have been induced by politicians and economists into accepting an ideology of extreme competition and individualism, weakening the social bonds that make our lives worth living. And despite the 2008 financial crisis, which exposed the blatant shortcomings of neoliberalism, it still dominates our lives. Why? We haven’t yet produced a new story to replace it — a new narrative to help us make sense of the present and guide the future. So, Monbiot proposes his own: the “politics of belonging,” founded on the belief that most people are fundamentally altruistic, empathetic and socially minded. If we can tap into our fundamental urge to cooperate — namely, by building generous, inclusive communities around the shared sphere of the commons — we can build a better world. With a new story to light the way, we just might make it there.

Quote of the talk: “We are a society of altruists, but we are governed by psychopaths.”

Big idea: Economics has ceased to be a rational science in the service of the “greater good” of society. It’s time to ditch neoliberal economics and create tools that address inequality and injustice.

How? Today, under the banner of unfettered growth through lower taxes, fewer regulations, and lower wages, economics has become a tool that enforces the growing gap between the rich and poor. Nick Hanauer thinks that we must recognize that our society functions not because it’s a ruthless competition between its economically fittest members but because cooperation between people and institutions produces innovation. Competition shouldn’t be between the powerful at the expense of everyone else but between ideas battling it out in a well-managed marketplace in which everyone can participate.

Quote of the talk: “Successful economies are not jungles, they’re gardens — which is to say that markets, like gardens, must be tended … Unconstrained by social norms or democratic regulation, markets inevitably create more problems than they solve.” 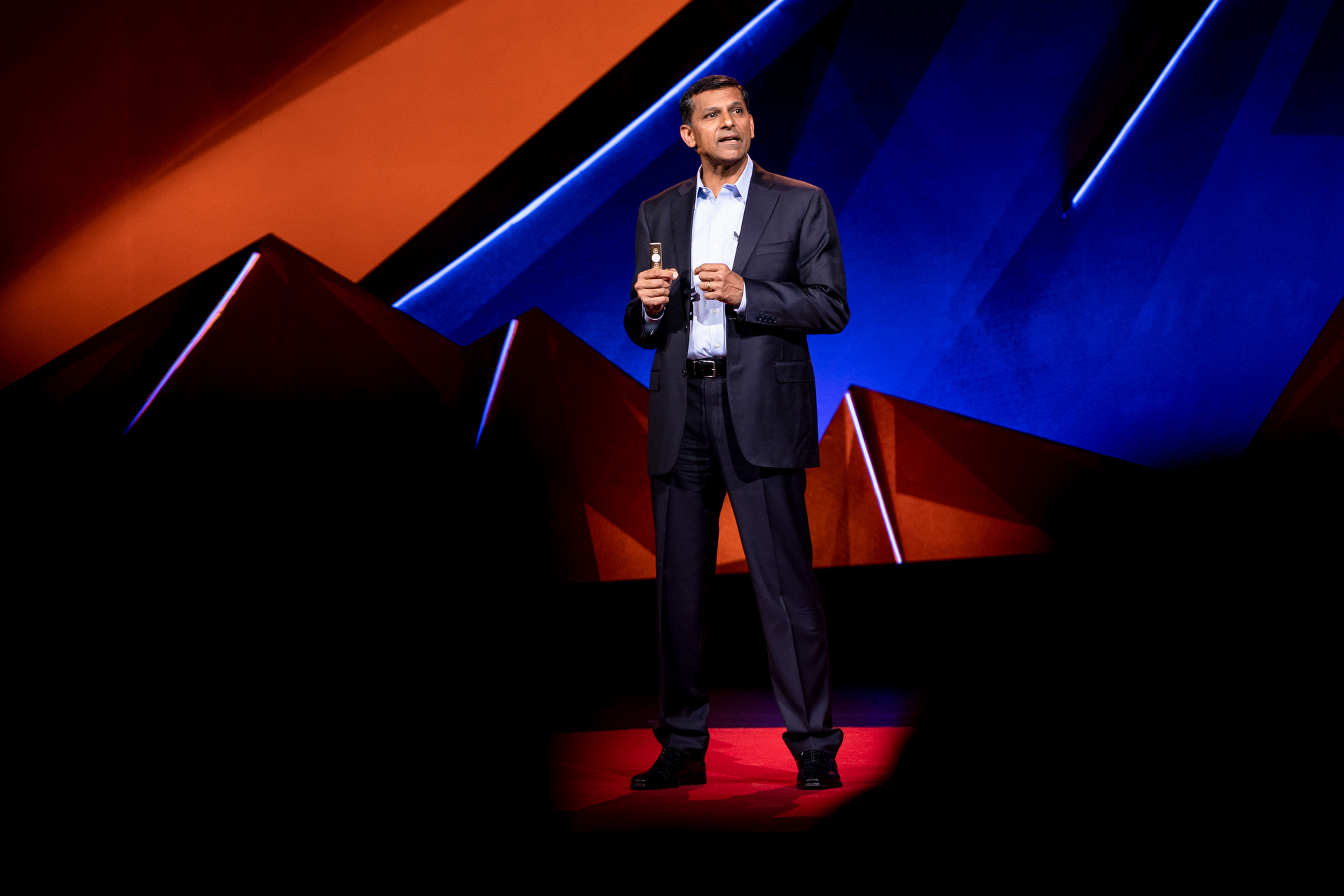 Raghuram Rajan shares his idea for “inclusive localism” — giving communities the tools to turn themselves around while establishing standards tp prevent discrimination and corruption — at TEDSummit: A Community Beyond Borders, July 23, 2019, in Edinburgh, Scotland. (Photo: Ryan Lash / TED)

Raghuram Rajan, economist and former Governor of the Reserve Bank of India

Big idea: As markets grow and governments focus on solving economic problems from the top-down, small communities and neighborhoods are losing their voices — and their livelihoods. But if nations lack the tools to address local problems, it’s time to turn to grass-roots communities for solutions.

How? Raghuram Rajan believes that nations must exercise “inclusive localism”: giving communities the tools to turn themselves around while establishing standards tp prevent discrimination and corruption. As local leaders step forward, citizens become active, and communities receive needed resources from philanthropists and through economic incentives, neighborhoods will thrive and rebuild their social fabric.

Quote of the talk: “What we really need [are] bottom-up policies devised by the community itself to repair the links between the local community and the national — as well as thriving international — economies.”

Big idea: Illusions that set our imaginations soaring are created when magic and science come together.

Why? “Is it possible to create illusions in a world where technology makes anything possible?” asks techno-magician Marco Tempest, as he interacts with his group of small flying machines called quadcopters. The drones dance around him, reacting buoyantly to his gestures and making it easy to anthropomorphize or attribute personality traits. Tempest’s buzzing buddies swerve, hover and pause, moving in formation as he orchestrates them. His mind-bending display will have you asking yourself: Was that science or magic? Maybe it’s both.

Quote to remember: “Magicians are interesting, their illusions accomplish what technology cannot, but what happens when the technology of today seems almost magical?”

Big idea: It’s possible to quell violence — in the wider world and in our own backyards — with democracy and a lot of political TLC.

How? Compassion-concentrated action. We need to dispel the idea that some people deserve violence because of where they live, the communities they’re a part of or their socio-economic background. Kleinfeld calls this particular, inequality-based vein of violence “privilege violence,” explaining how it evolves in stages and the ways we can eradicate it. By deprogramming how we view violence and its origins and victims, we can move forward and build safer, more secure societies.

Quote of the talk: “The most important thing we can do is abandon the notion that some lives are just worth less than others.” 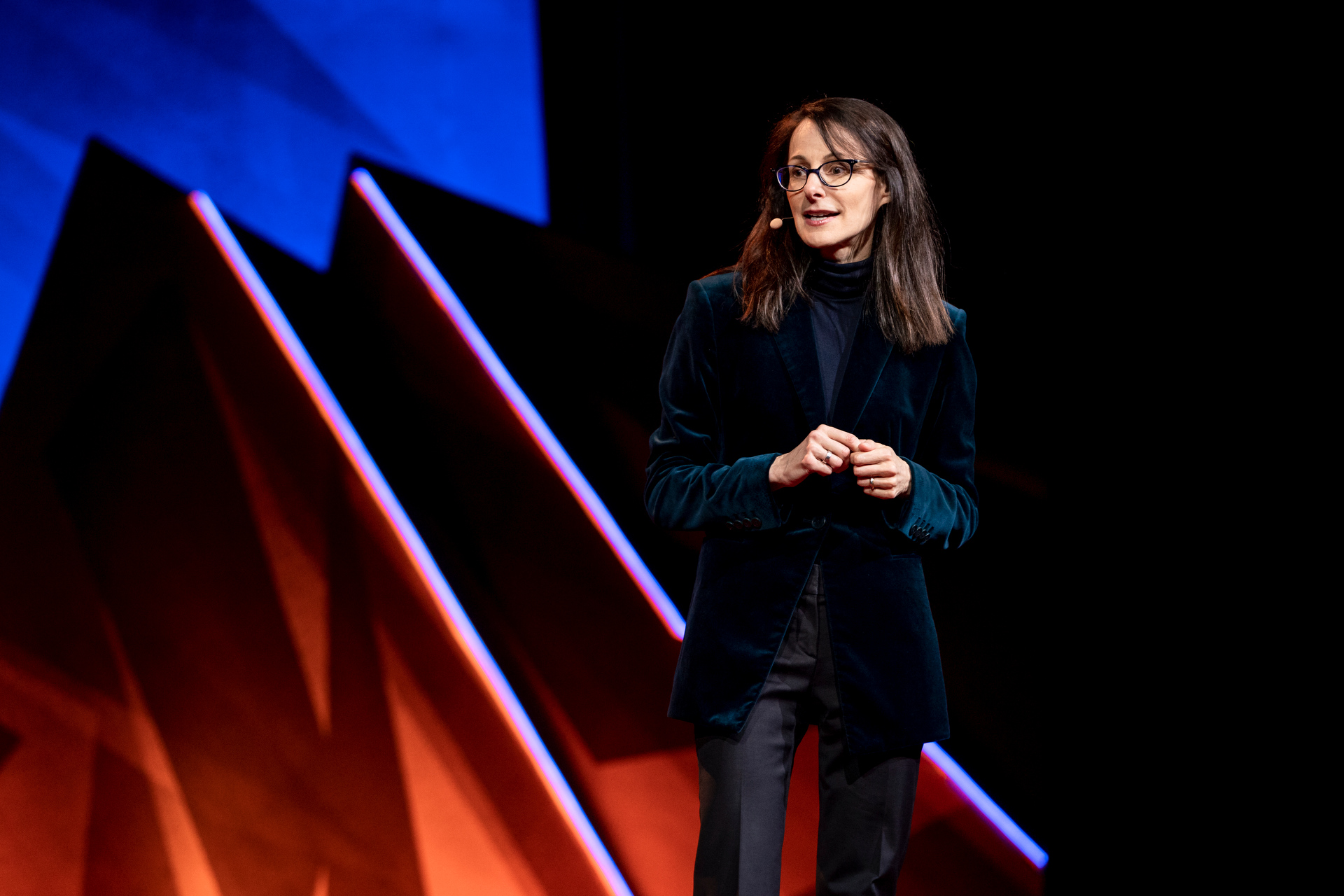 “Not only do we believe fakes, we are starting to doubt the truth,” says Danielle Citron, revealing the threat deepfakes pose to the truth and democracy. She speaks at TEDSummit: A Community Beyond Borders, July 23, 2019, in Edinburgh, Scotland. (Photo: Ryan Lash / TED)

Big idea: Deepfakes — machine learning technology used to manipulate or fabricate audio and video content — can cause significant harm to individuals and society. We need a comprehensive legislative and educational approach to the problem.

How? The use of deepfake technology to manipulate video and audio for malicious purposes — whether it’s to stoke violence against minorities or to defame politicians and journalists — is becoming ubiquitous. With tools being made more accessible and their products more realistic, what becomes of that key ingredient for democratic processes: the truth? As Danielle Citron points out, “Not only do we believe fakes, we are starting to doubt the truth.” The fix, she suggests, cannot be merely technological. Legislation worldwide must be tailored to fighting digital impersonations that invade privacy and ruin lives. Educational initiatives are needed to teach the media how to identify fakes, persuade law enforcement that the perpetrators are worth prosecuting and convince the public at large that the future of democracy really is at stake.

Quote of the talk: “Technologists expect that advances in AI will soon make it impossible to distinguish a fake video and a real one. How can truths emerge in a deepfake ridden ‘marketplace of ideas?’ Will we take the path of least resistance and just believe what we want to believe, truth be damned?” 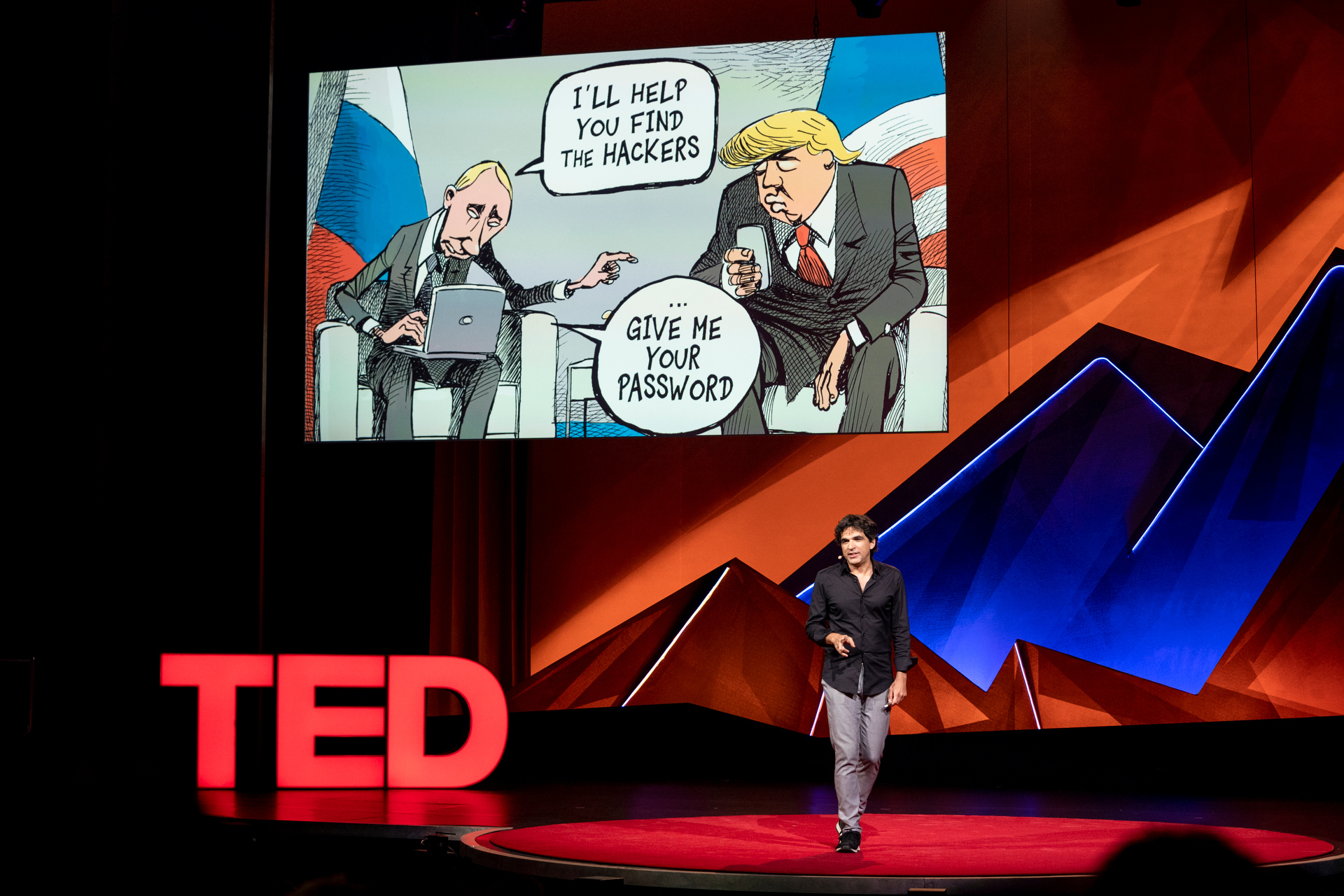 “Freedom of expression is not incompatible with dialogue and listening to each other, but it is incompatible with intolerance,” says editorial cartoonist Patrick Chappatte. He speaks at TEDSummit: A Community Beyond Borders, July 23, 2019, in Edinburgh, Scotland. (Photo: Ryan Lash / TED)

Big idea: We need humor like we need the air we breathe. We shouldn’t risk compromising our freedom of speech by censoring ourselves in the name of political correctness.

How? Our social media-saturated world is both a blessing and a curse for political cartoonists like Patrick Chappatte, whose satirical work can go viral while also making them, and the publications they work for, a target. Be it a prison sentence, firing or the outright dissolution of cartoon features in newspapers, editorial cartoonists worldwide are increasingly penalized for their art. Chappatte emphasizes the importance of the art form in political discourse by guiding us through 20 years of editorial cartoons that are equal parts humorous and caustic. In an age where social media platforms often provide places for fury instead of debate, he suggests that traditional media shouldn’t shy away from these online kingdoms, and neither should we. Now is the time to resist preventative self-censorship; if we don’t, we risk waking up in a sanitized world without freedom of expression.