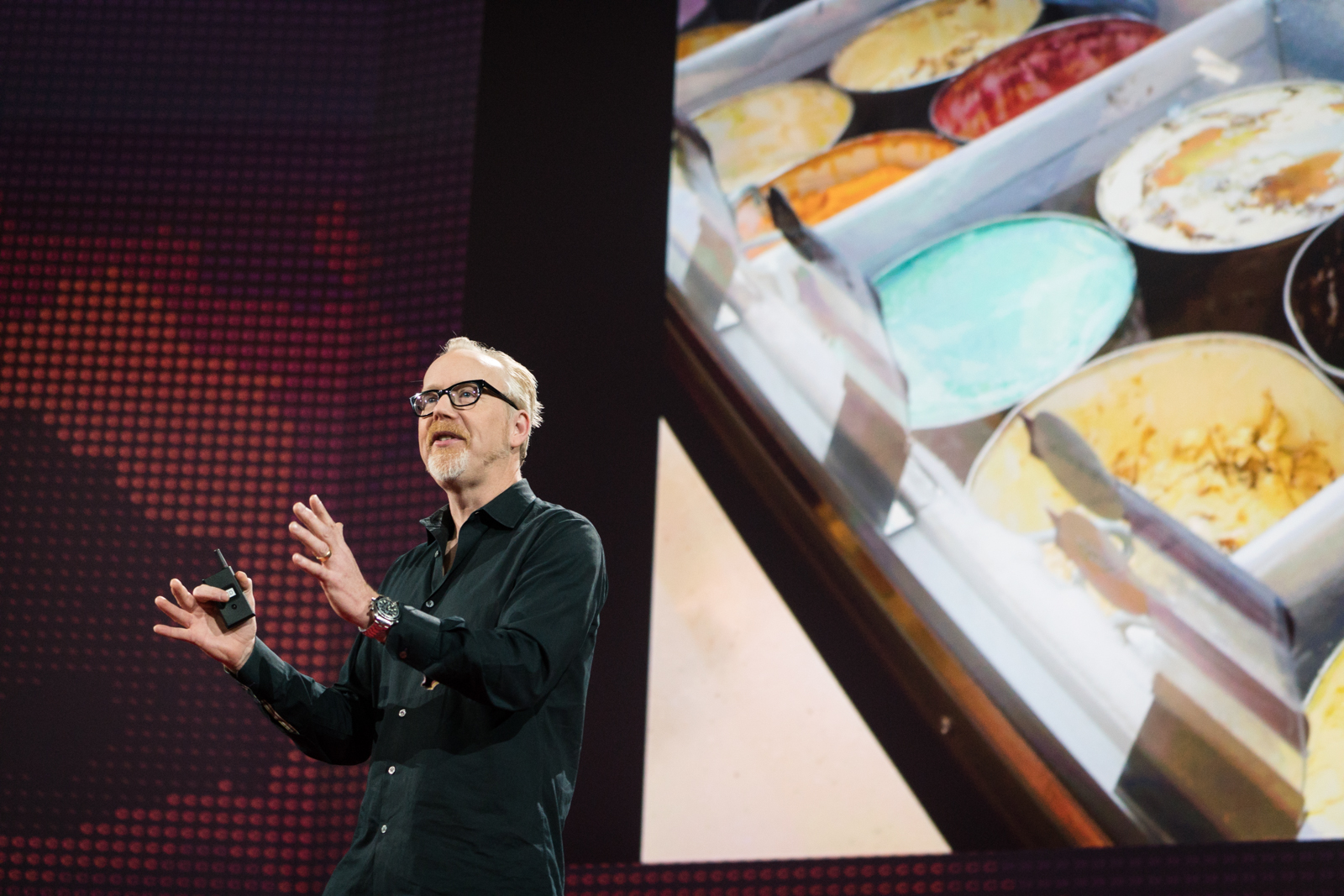 Why is Adam Savage showing us a picture of ice cream? Because the empty cartons make great space helmets. He spoke onstage at TED2016 on Tuesday, February 16, 2016. Photo: Bret Hartman / TED

Patterns delight the mind and eye. And yet, they sometimes lead to us getting stuck — not just in behaviors, but in systems. The speakers in Session 2, “Radical Repatterning,” can see what’s beyond the status quo.

Below, recaps of the talks in Session 2, in chronological order, from a speaker who will challenge how you think about math to the entrepreneurs who have shifted the way you travel and get around.

A subculture for revealing your true self. Adam Savage is known as one of the Mythbusters, but he’s also a collector of costumes. “We’ve evolved to the point where we can’t survive without clothing,” he says — and “everything we choose to put on is a narrative.” Savage recalls the first costume he made as a child, inspired by a carton of ice cream that just so happened to make a perfect space helmet. Another beloved costume was inspired by Jaws, which he was obsessed with, despite being too young to see it. As an adult he incorporates costumes into his work: “I use costumes to add humor, color and narrative clarity to the stories we’re telling,” says Savage. And he’s taken to cosplay, the subculture of dressing up as one’s favorite TV or film characters at conventions like Comic-Con, the “costuming mecca.” Cosplay is beautiful because of how seriously people take it, becoming other characters, and tweaking them to become their own versions of the people they want to be. Because, he says, “The costumes are how we reveal ourselves to each other.”

The thrill of mathematical discovery. What do the French do better than anyone else? “The top three answers might be: love, wine and whining,” says Cédric Villani. “But let me suggest a fourth one: mathematics.” In fact, Paris has more mathematicians than any other city, and France has more Fields Medal winners per inhabitant than any other country. What do the French find so sexy about math? Well, it may be abstract, but it’s certainly not dull. “It’s … about imagination,” Villani says. “It is about finding the truth.” Hidden truths permeate our world, and mathematics allows us to go beyond intuition and explore territories outside our grasp. For example, in 1673, French astronomer Jean Richer noticed that a pendulum swings slightly slower in Cayenne, in French Guiana, than in Paris. From this observation, Isaac Newton correctly deduced that the earth is flatter at the poles. Or take a more recent example: Google’s PageRank, which allows us to navigate the billions of web pages on the Internet using mathematical laws of randomness. “I believe that everybody can appreciate the thrill of mathematical research,” Villani says. “So, when you come to Paris, after you’ve tasted the great crispy baguette and macaron, please come and visit us at l’Institut Henri-Poincaré and share the mathematical dream.” 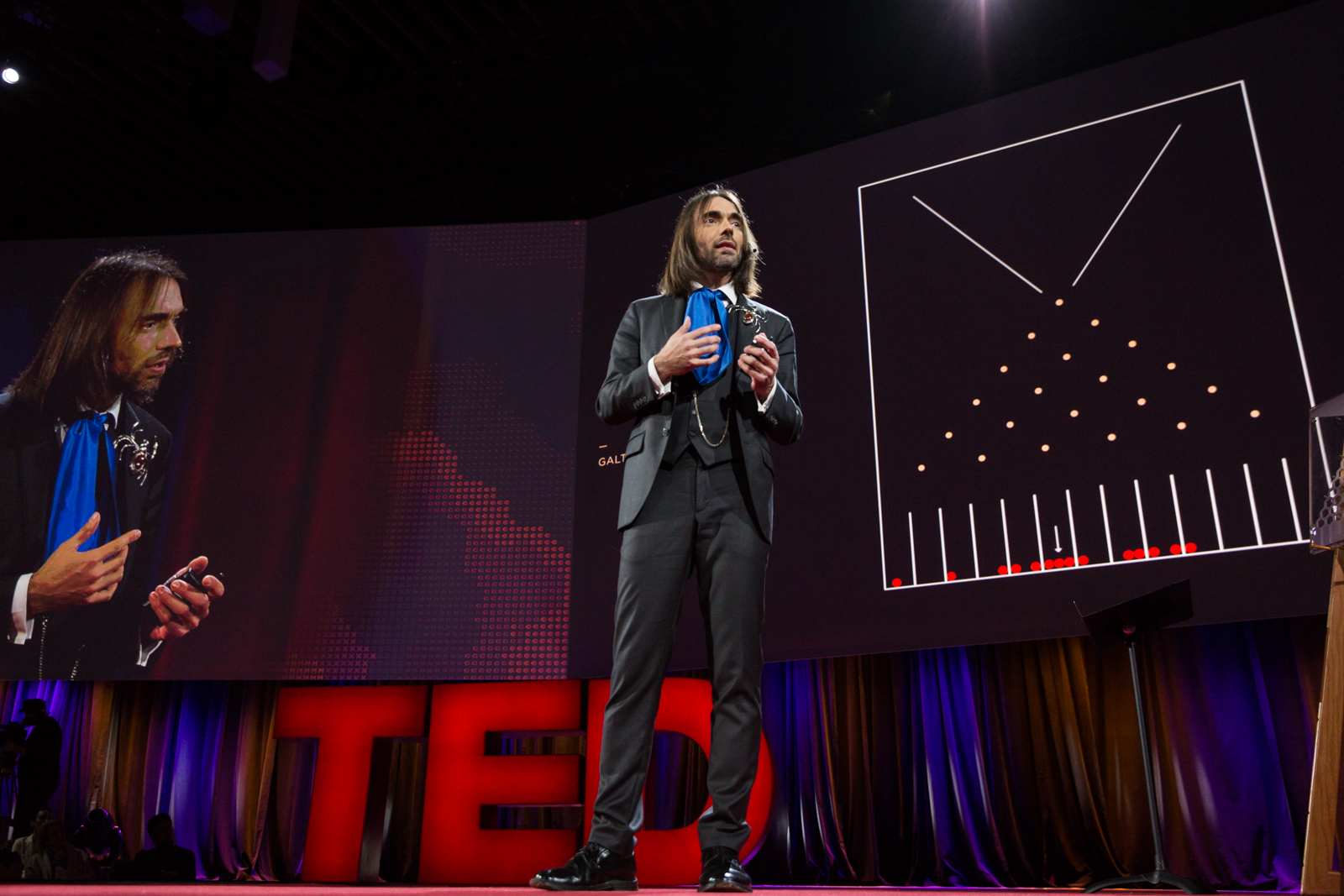 Radical rhythms. So Percussion wakes up the TED audience in Day 2’s early-morning session. The quartet creates collaborative performances, often making new instruments with unconventional surfaces and objects called chord sticks. The piece they’ve brought to TED was composed by Bryce Dessner of The National, and it brings together wood and strings with an electric guitar and dulcimer for a hypnotic effect.

How to design for trust. Joe Gebbia accidentally founded Airbnb. After graduating from design school, he held a yard sale. As he talked to a stranger who bought a piece of art, the stranger revealed he was bound for the Peace Corps the next day, but didn’t have a place to sleep that night. Gebbia, against his better judgment, offered him an air mattress in the living room. He stayed up all night panicking — but everything was fine. The two remain friends today. “We’ve all been taught as kids that strangers equal danger,” says Gebbia. “We based our whole company on the hope that, with the right design, people could overcome the stranger-danger bias.” The site has been successful (in a single night, 785,000 people in 191 countries will either stay in a stranger’s home or welcome someone in) in part because they use design to create trust: The site shows just the right number of reviews to enhance trustworthiness (10 or more); and in message boxes for setting up stays, people are given just enough space to share their needs … but without oversharing. We can design for magical experiences, says Gebbia. “Today, homes are designed around the idea of isolation and privacy,” he says. “What if homes were designed to be shared from the ground up? What if cities embraced the culture of sharing?” 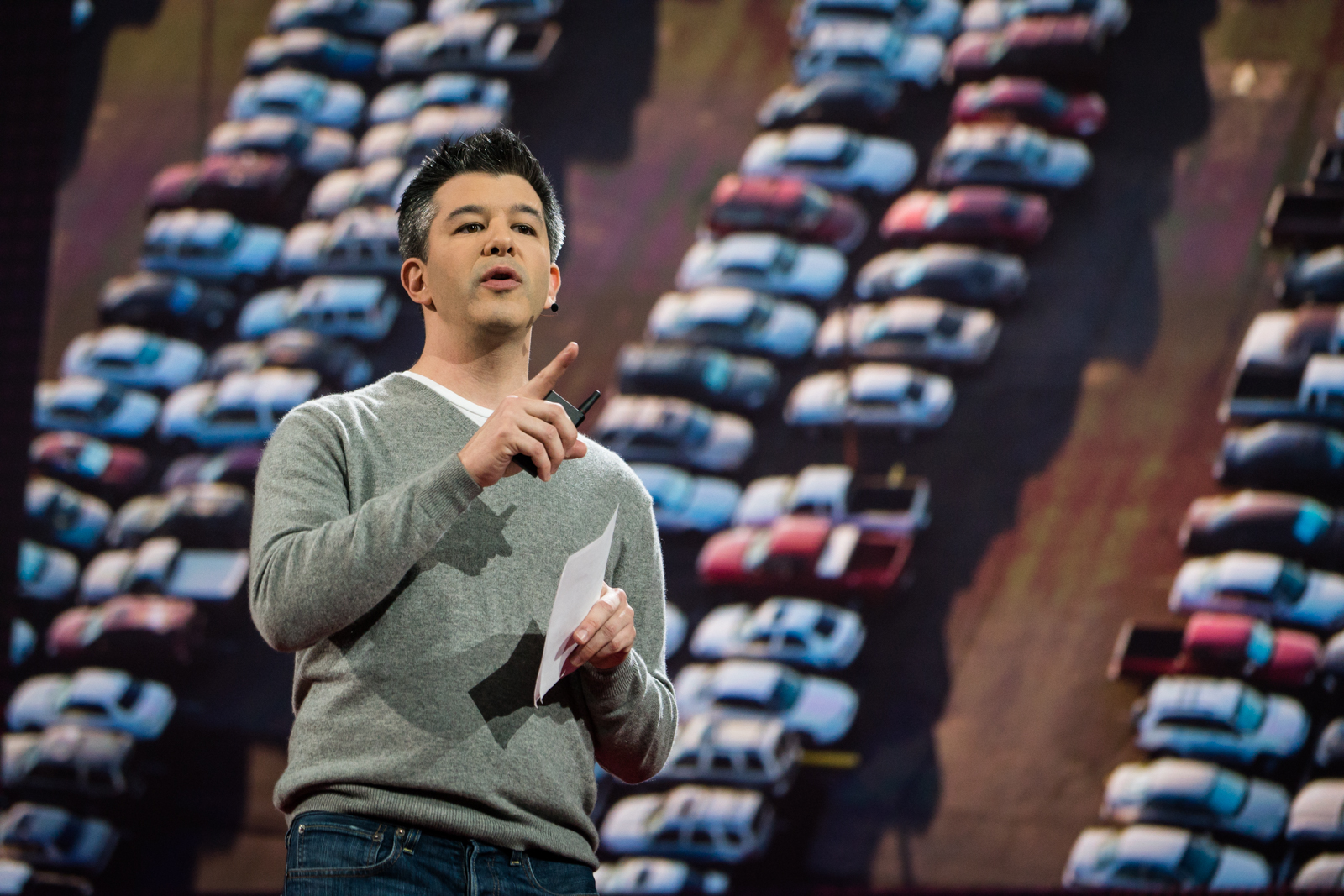 Travis Kalanick is the founder of Uber — the wildly popular, somewhat controversial ride-hailing service with a mission to take cars off the roads. He spoke onstage at TED2016 on Tuesday, February 16, 2016. Photo: Bret Hartman / TED

Can carpooling change the world? Did you know there was an Uber before Uber, more than a century ago? In 1914, L.P. Draper started a ride-sharing service called the jitney in Los Angeles. A year later, 150,000 people carpooled using the jitney each day. To put that in perspective, Uber provided 157,000 rides a day in LA last week. Ride-sharing in its earliest form was regulated out of existence by the streetcar lobby, and the rest is history: By 2007, there was a car for every man, woman and child in the US. “All this private ownership had a public cost,” says Uber’s “problem-solver-in-chief,” Travis Kalanick. Cars account for one-fifth of the carbon footprint, and they clog roads from New York to Tokyo. Uber didn’t start with grand ambitions to solve congestion, but as it took off, Kalanick started to wonder if there was a way to get people using Uber along the same routes to share rides. With uberPOOL, more people are getting around cities in fewer cars. In its first eight months, Uber took 7.9 million miles off the roads in LA. And it could work in the suburbs. “How do we turn commuter cars into shared cars?” Kalanick asks. The solution: uberCOMMUTE, which matches up people getting to work along the same routse. “With the technology in our pockets,” Kalanick says, “we can turn every car into a shared car and reclaim our cities today.”

How governments can create better digital services. Technologist Haley Van Dyck works in an unlikely place — inside the White House. The co-founder of the United States Digital Service, her team is transforming the way that the government delivers digital services to veterans, immigrants, students, senior citizens and the disabled. The key? To think more like a tech startup. Find out how in a full recap of her talk.