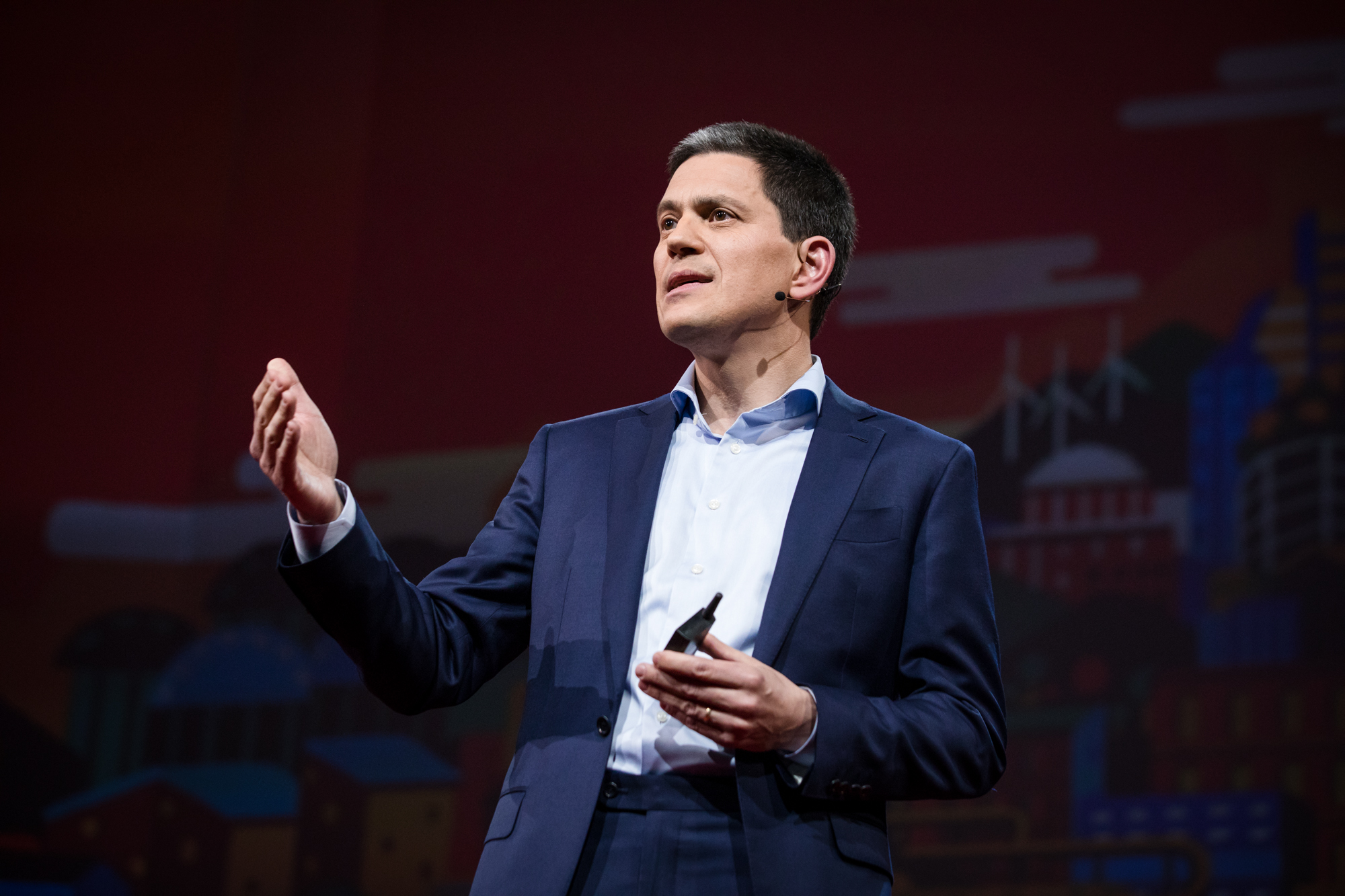 David Miliband asks us to see the refugee crisis as a test of our humanity — and our humility. He speaks at TED2017, April 26, 2017, Vancouver, BC, Canada. Photo: Bret Hartman / TED

David Miliband came to TED with a specific message: The global refugee crisis is not unsolvable — and it’s actually a test of those of us in the West.

For Miliband, this crisis is personal, not just professional. Both his mother and father were refugees who were forced to flee their homes in World War II. “If Britain had not admitted refugees in the 1940s,” he says, “I certainly wouldn’t be here today.”

Today, humanitarian principles are on fire in the very countries that seventy years ago said “Never again” to statelessness and hopelessness. Sixty-five million people were displaced from their homes by conflict and disaster last year — that’s 24 people every single minute — from a chemical attack in Syria to the Taliban on the rampage in Afghanistan to girls driven from their schools in Nigeria. If these people were a country, they would be the 21st-largest country in the world. “These are not people on the move seeking a better life — they’re fleeing for their lives,” Miliband says.

Most of these people are displaced within their own home country, but 25 million cross borders and become refugees. They are living in Turkey, Jordan, Pakistan, Kenya, Iran. One in every four people in Lebanon is a refugee, a quarter of the population. And most refugees are displaced for a long time — the average is ten years.

The causes are deep: weak states that can’t support their own people and a divided international political system. “Those are long-term, generational challenges,” Miliband says. “This refugee crisis is a trend, not a blip.”

The problems are real, but so are the solutions, Miliband says.

Solution 1: Refugees need to be able to work. Support for work needs to be the norm.

Solution 2: Education for refugee kids should be a lifeline, not a luxury. “Kids can bounce back when they’re given the proper social, emotional support alongside literacy and numeracy,” Miliband says.

Solution 3: Refugees need money. Most refugees are in cities, not camps, and cash assistance empowers refugees and boosts the local economy.

Solution 4: The most vulnerable refugees need the chance to start a new life in the West. “Now is not the time to be banning refugees,” Miliband says, “it’s the time to be embracing people who are victims of terror.”

“This is not just a crisis — it’s a test,” he continues. “It’s a test of our humanity — of us, in the Western world, of who we are and what we stand for. It’s a test of our character; not our policies.” Fail to help and we show we have no moral compass at all.”

It’s also a test of whether we know our own history. Extraordinary Western leadership after World War II created the international system of refugee rights we have today. “Trash the protections of refugees and we trash our own history,” Miliband says.

It’s also about democracy. For refugees fleeing for freedom, democracy really means something. Western countries have been a source of hope and a place of haven, and we must not throw that away.

Finally, this is about humility over mistakes in the past. “You can’t make up for foreign policy failures with humanitarian action, but when you break something you need to try and repair it.”

The modern refugee crisis is manageable, not unsolvable, Miliband says, and he leaves us with specific ways to make a difference: If you run a business, employ refugees; if you believe refugees deserve help, use your voice and take on the myths that hold back policy; if you have money, give it to charities that help refugees; if you’re a citizen, put people in power who will put the policy solutions into practice. He concludes: “This is about the rescue of us and our values as well as the rescue of them and their lives.”