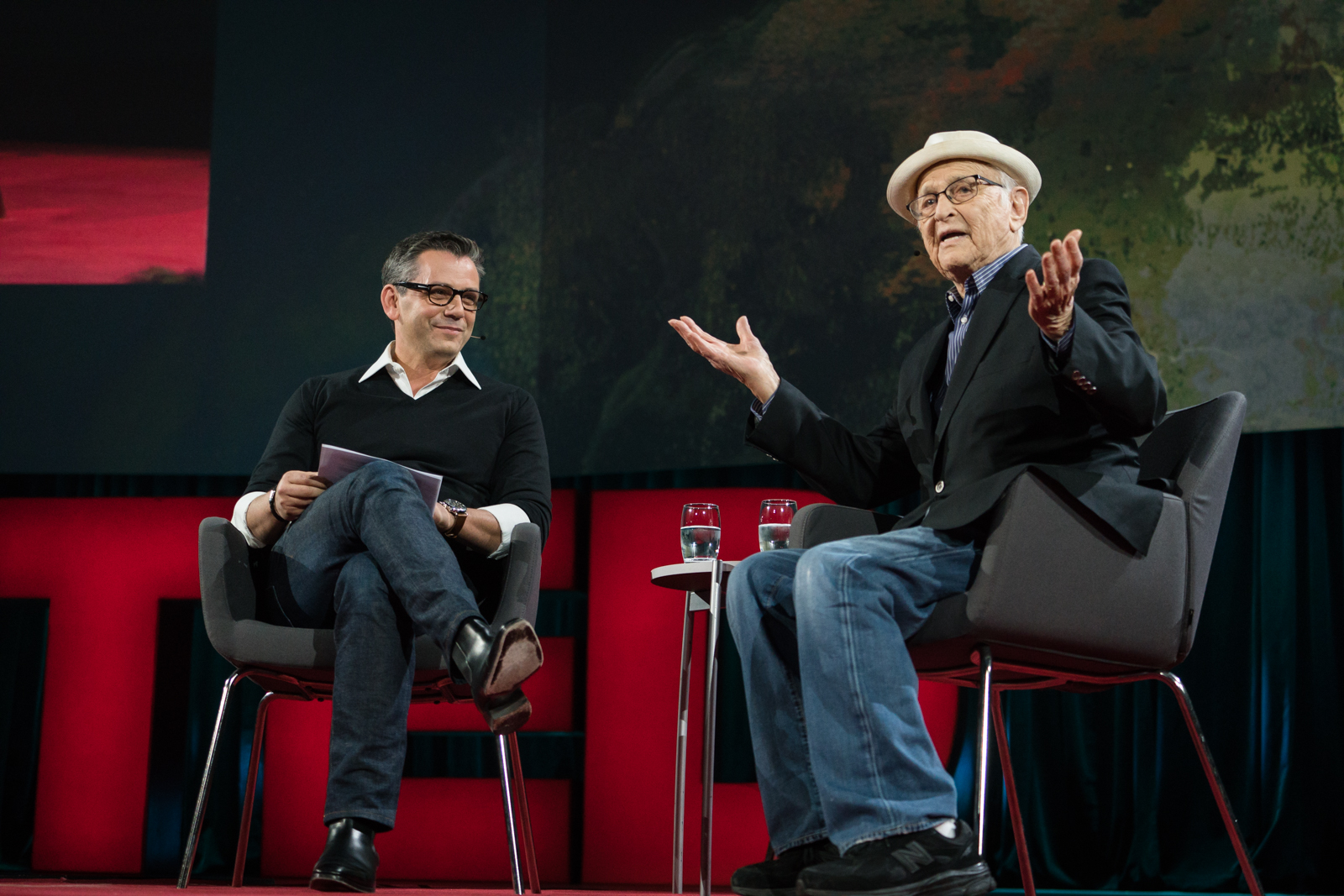 Session 5 starts with a talk from a 93-year-old television icon. But it goes back so much further in time than that. As astronomer shares the mystery of a star’s light that dimmed 1,500 years ago. A paleontologist walks us back more than 66 millions. And capping it off: the reveal of this year’s TED prize wish, from a satellite archaeologist who is transforming what we understand about the ancient world.

Recaps of the talks in Session 5, “Deep Memory,” in chronological order.

A television icon at 93. “When I was 89, I didn’t get this type of reception,” says Norman Lear, who brought you television shows like All in the Family and The Jeffersons, and movies like The Princess Bride and This is Spinal Tap, and is the oldest TED speaker, male division (Eva Zeisel spoke at TED2001 at age 95). Lear was a radio operator in WWII, then moved to Los Angeles to break into Hollywood. At the top of his game, 120 million people watched his shows a week. “Holy shit,” says Lear, as interviewer Eric Hirshberg lists his assorted accomplishments — including buying a copy of the Declaration of Independence to give back to the American people. The secret of his success? Lear says it goes back to understanding the “foolishness of the human condition.” He says, “I’ve spent my life, if anything, wanting to be heard.” Lear has written a memoir, Even This I Get to Experience, and is clearly coming to terms with the impact his work had on American culture. He shares something Russell Simmons told him at the Emmys last year. “He saw George Jefferson write a check on The Jeffersons, and he said that he never knew a black man could write a check,” says Lear. “It’s hard for me to imagine changing someone’s life. … Everyone here is responsible for some little thing they did for somebody — a smile, an unexpected hello. That’s how little this thing was.”

An unlikely history. This is all improbable: that dinosaurs should have lived on Earth; that they should have gotten snuffed out all at once in a freak accident; that apes should have evolved sentient thought; that they should walk the earth, and invent music, writing and science; and that they should someday pick up the bones of those giant improbable beasts that lived before them. Paleontologist Kenneth Lacovara whips rapid-fire through Earth’s ages in a celebration of our geological history, to show how chance events shaped our world and lives. He takes us right up to the moment in the mid-2000s in Argentinian Patagonia when he stumbled upon a 2-meter-long femur, which turned out to be one of a system of 145 other bones that belonged to a newly discovered plant-eating dinosaur — 85 feet long, as tall as a house, weighing 65 tons — which Lacovara and his team named Dreadnoughtus schrani, or “fears nothing.” Says Lacovara: “There are an infinite number of histories we could have had, and we only get one — and, wow, did we get a good one.” 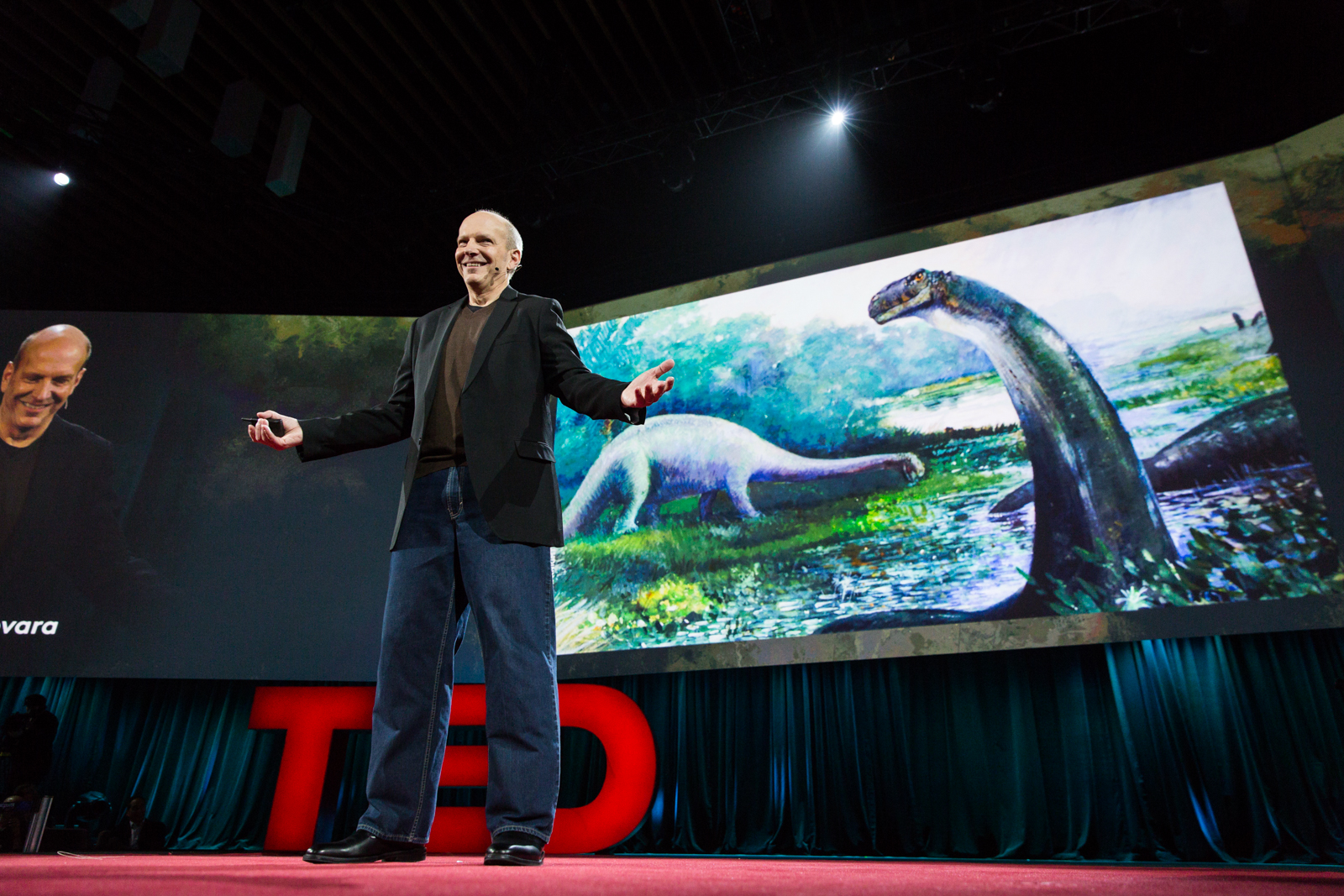 Extraordinary claims require extraordinary evidence. After Tabetha Boyajian exhausted all possible natural explanations for some seriously irregular data from NASA’s Kepler space probe, a colleague suggested something crazy — could it be a massive alien megastructure? Learn more about her journey in a full recap of her talk.

The patron saint of listening. The TED Prize is a $1 million award given annually to an audacious thinker with a project the world can get involved in. In 2014, it went to anti-corruption activist Charmian Gooch, whose latest investigation on just how easily lawyers will give advice on hiding dirty money was featured on 60 Minutes in January 2016. (Her work will be the subject of an upcoming Vice and Sundance documentary; watch for news.) In 2015, Dave Isay, the founder of StoryCorps, won the TED Prize. He is back now to give an update on the evolution of his wish, the launch of an app to open up and transform the mission of his oral history project. He recalls the Great Thanksgiving Listen, a campaign that encouraged American high school students to honor an elder over the holiday weekend with a recorded story. Students uploaded 50,000 interviews — as many as StoryCorps recorded in its first 10 years combined. These kinds of stories are essential now, in the political divisive moment we’re in, says Isay. “Listening to people’s authentic stories, especially the stories of those we might otherwise fear as strangers, can help us recognize a little bit of ourselves in others,” he says, “And in doing so can build indelible bridges of understanding.”

Be a space archaeologist on your coffee break. Sarah Parcak is a space archaeologist. (“NASA uses the term,” she says, “so it’s a real thing.”) She analyzes satellite data in order to locate lost ancient sites all around the world, and as the winner of the 2016 TED Prize, she wants to bring the world into this line of work. “Ninety-four years ago, Howard Carter discovered the tomb of King Tut,” she says. “Who will be the next Howard Carter? Could it be you?” Read more about her vision for a citizen science platform that will turn you into Indiana Jones in a full recap of her talk

A musical meeting of East and West. Silk Road Ensemble opened Session 5 in an eclectic convergence. Emblematic of the actual Silk Road, the ancient trade route that carried both goods and revolutionary ideas between China and the Mediterranean, the eight-person band played “Turceasca,” a traditional Roma tune arranged here for Roma, Western and Chinese instruments. The Roma people have coded their own treasures, their traditions, in their music, and as they travel and migrate, their music has evolved with each place they’ve been; their music is a form of cultural preservation that grows through their travels. With dizzying violin and clarinet solos, the fast-paced instrumental sets an energetic tone. They are now back to close the session with singer Rhiannon Giddens. to sing the traditional St. James Infirmary Blues,” an American folksong often said to be based on an 18th-century English folksong, Michael Ward-Bergeman was inspired to create his arrangement for the Silk Road Ensemble and Rhiannon Giddens when he heard the Roma band Taraf de Haidouks playing the song “I went down to St. James infirmary / I saw my baby there / She was stretched out on a long white table / So cool, so sweet and so fair,” she sings, in a clear and soulful voice. The ensemble’s deep, languishing accompaniment featuresa haunting cello and violin performance. 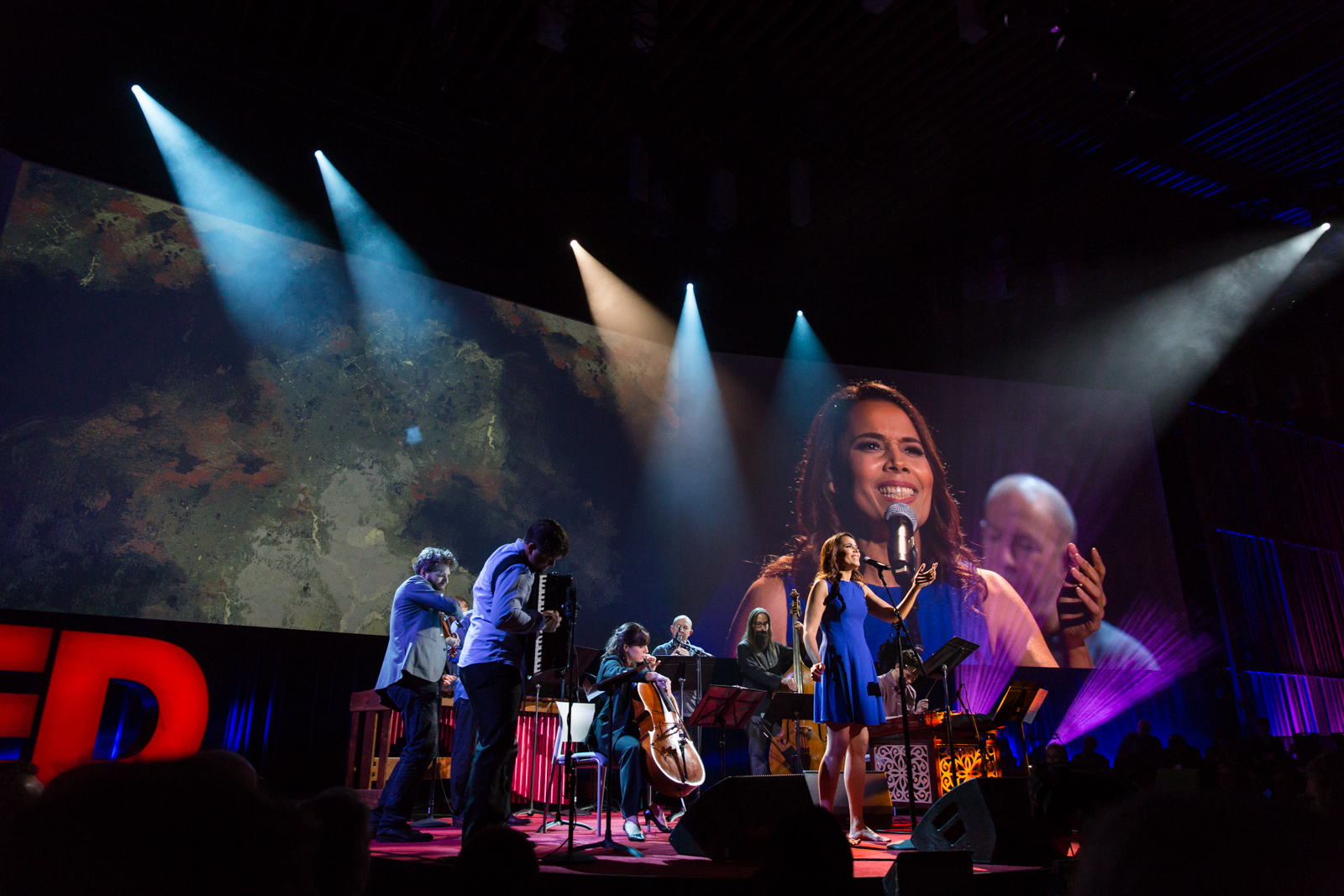