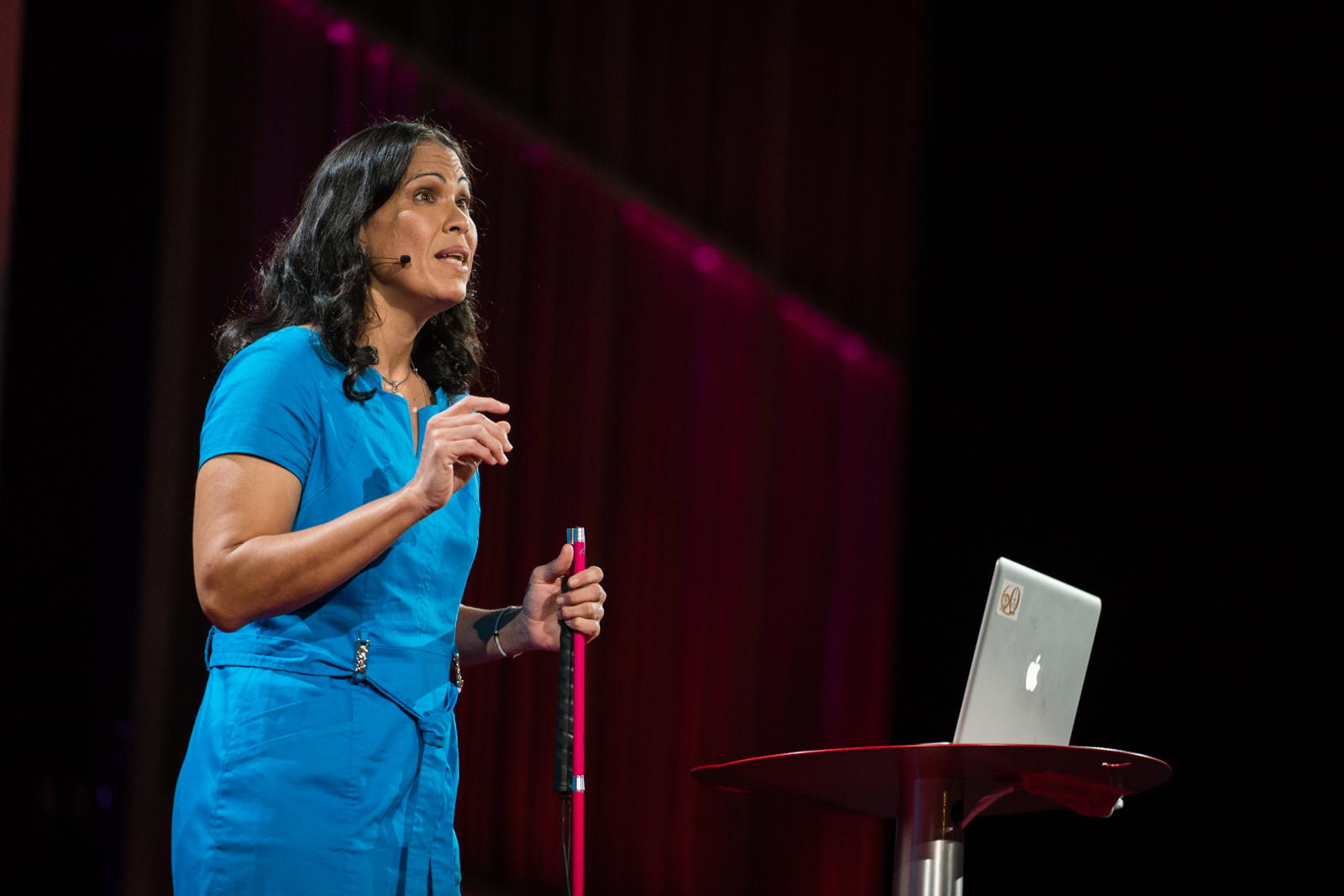 Session 3 of TED2016 examines the ‘i’ words: Imagination. Invention. Ingenuity. Hosted by TED Fellows Jedidah Isler and José Gómez-Márquez, this session is all about speakers who’ve taken the spark of inspiration and put it into action.

Recaps of the talks in Session 3, in chronological order.

A new way of “seeing.” Early in her career as an astrophysicist, Wanda Diaz Merced became blind from an extended illness. She was caught in a difficult transition, she says: “It left me without a way to do my science.” But she thought long and hard, and realized that the light curves she could no longer see are nothing more than tables of numbers converted into visual plots. And tables can be translated into sound. “Sonification,” as this process is called, became Merced’s method to regain mastery over her work. “Today,” she says, “I’m able to do physics at the level of the best astronomer, using sound.” Merced plays a clip of the sounds she works with — it’s a cheerful mix of a phone ringtone and wind chimes. Sonification has allowed Merced’s sensitive ear to pick up on information not visually obvious. Through this work, she says, she’s realized how important it is to provide information access to aspiring scientists with disabilities. “I dream of a level scientific playing field,” she says.

The intersection of haircuts and health: One day, Joseph Ravenell’s barber made an interesting remark: “Hey doc,” he said, “you know, lots of black men trust their barbers more than they trust their doctors.” Find out how Ravenell is saving lives by turning the black barbershop into a venue for medical intervention in a full recap of his talk.

The ultimate toy. Michael Sng was a graphic designer who decided that he wanted to build “the ultimate toy” — a self-propelled military vehicle that combined every awesome toy from his boyhood. Though he had none of the skills he needed, he set out to make his toy from scratch. For the next 18 months, Sng taught himself how to use an Arduino, worked with a 3D printer, and tried and tried again to get his 3D-printed toy legs to work. The result was Codename Colossus, a wildly over-the-top fantasy war machine made of 435 3D-printed and laser-cut pieces. “Although I struggled,” he says, “I never once was bored.” 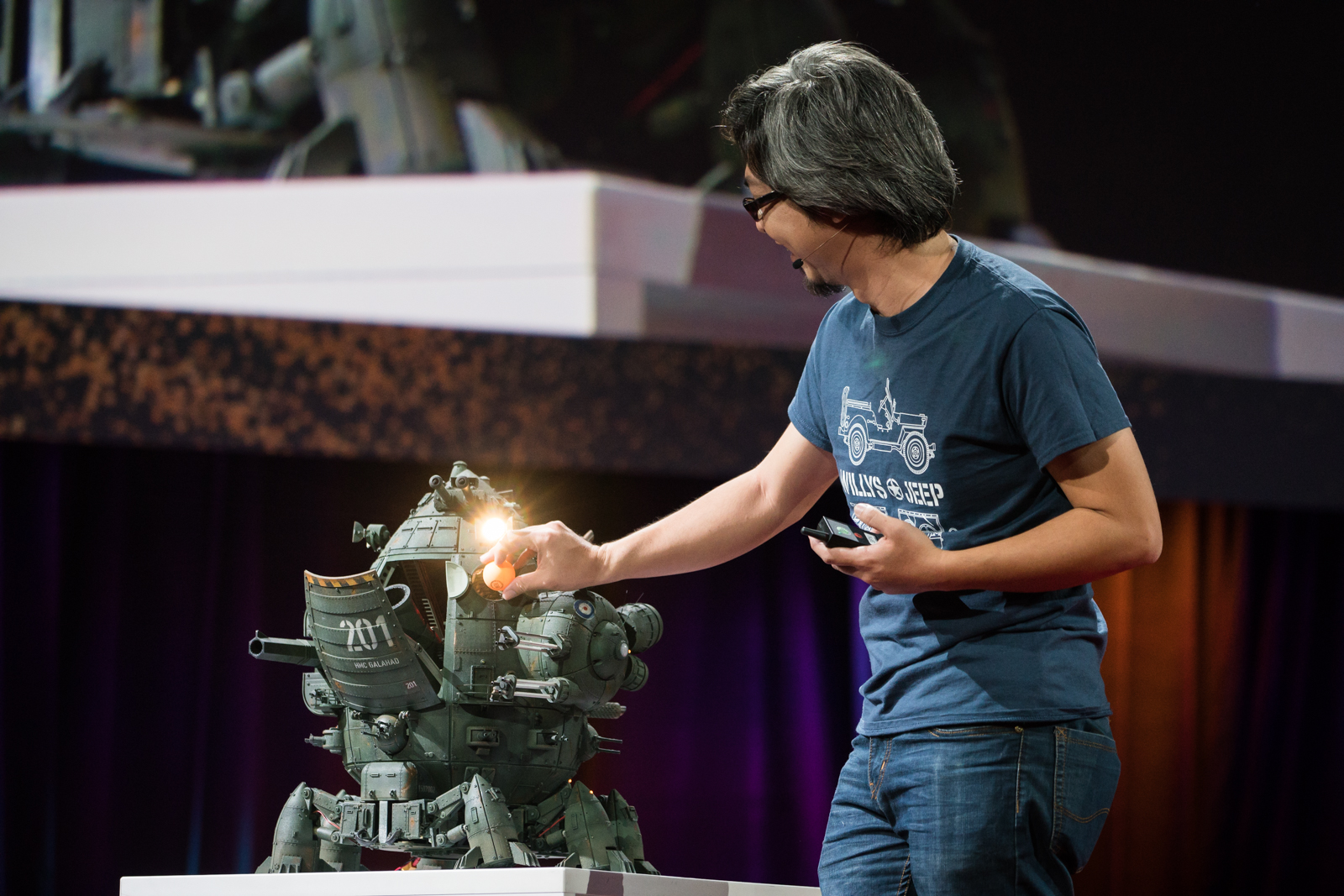 Michael Sng invented the toy of his dreams — then learned how to build it. He spoke onstage at TED2016 on Tuesday, February 16, 2016. Photo: Bret Hartman / TED

Accessible fart machines, hand-less video game controllers. Occupational therapist Holly Cohen asks us to imagine buying a remote-controlled car for a little girl who, because of a disability, has limited use of her hands. She can’t hold things, but that doesn’t mean she can’t play. “If somebody in her life knew how to adapt the toy, she could participate,” says Cohen. If that toy car runs on a battery, for instance, it could be adapted with a 25-cent “mono jack” to be operated with a large aluminum-foil switch or even a breath of air. Cohen co-founded DIYAbility, a maker organization that encourages kids and their families to tweak toys, video games and other tech for accessibility. She shares some of the things the organization has helped people make, by soldering, using 3D printers and laser cutters to make toys can be operated by a single finger, eye movement, even a toe. Including, yes, a fart machine that works by remote control. “We build for what someone can do, not for what they can’t do,” she says: “We need to be the makers of our own solutions.”

The best solutions are often the simplest. As a child, Franz Freudenthal helped his grandmother, Dr. Ruth Tichauer, on medical visits to remote indigenous communities in the Andes. On those days, she’d recite part of a Rudyard Kipling poem: “Something hidden. Go and find it. Go and look behind the Mountains!” After Freudenthal became a medical student, he discovered that one in every 100 children born worldwide has some kind of heart disease. One of these diseases, patent ductus arteriosus, occurs when a blood vessel in the heart fails to close after birth. Babies born with this condition appear desperate to breathe, and the problem is especially bad in high-altitude, oxygen-deficient environments. Inspired by the complex traditional weaving techniques of the Bolivian indigenous populations, Freudenthal created a revolutionary device made of Nitinol wire, a smart material that records the shape of a cardiac shunt. A doctor need only deliver the catheter to the site of the shunt, and the device does the rest. “The path is not easy — many obstacles arise all the time,” Freudenthal says. “But we receive the strength from our patients. Their resilience and courage inspire our creativity.” His grandmother and Kipling were right — he discovered what was behind the mountains. 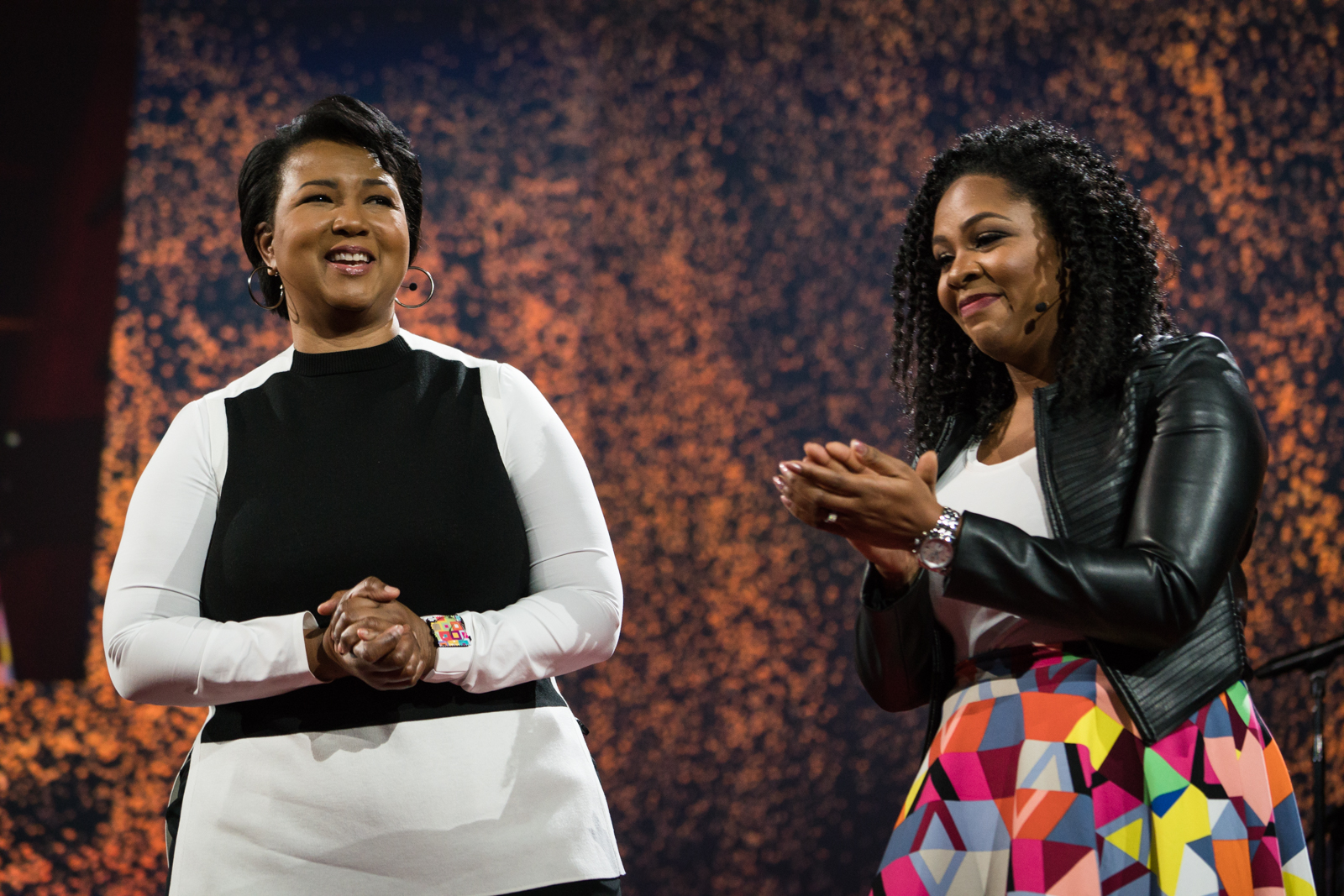 Mae Jemison asks us to think long term — very long term — as we pull together to help humanity explore the stars. She spoke onstage at TED2016 on Tuesday, February 16, 2016. Photo: Bret Hartman / TED

Interstellar travel will take interdisciplinarianism. Mae Jemison was the first woman of color in space, but she’s also an engineer, a physician, an educator and more. It’s this interdisciplinary approach, she believes, that will help human beings travel in space. “I believe that pursuing human interstellar travel is really necessary to build a better world today,” she says. “None of the problems we have today can actually be solved by one discipline.” Jemison leads the 100 Year Starship, which aims to make human interstellar a possibility in the next century. The key is building a team across disciplines. The challenges of intersteller travel are big — objects are incredibly far apart (think: three grains of sand in a cathedral), crews have to be autonomous (they can’t simply send for supplies), and everything is very, very dark. Planning for interstellar travel means thinking about clothing, sustainable agriculture, communication, health and so much more — so Jemison’s team includes everyone from textile designers to sci-fi authors. Her point is that space travel is “not just about rocket engines — it’s about who we are as people,” she says. “The reality is most of us aren’t going to get off this planet. … We’re going to have to figure out how to be here ourselves.”

A musical journey through Accra. Lighting up the stage with his signature Afrobeat and hip-hop blend, Blitz the Ambassador and his band close out Session 3 with a spark of infectious life. First, a swing drumbeat began, followed by vibrant jazz horns that energize Blitz’ quick rhymes. Meanwhile, a video he wrote, directed and produced plays behind them, showcasing the magical realism of life in Accra, Ghana, his hometown. Then, using soaring saxophone and bass solos over dimmed lights, he transitions to swirling, breakneck-speed vocals … and back. 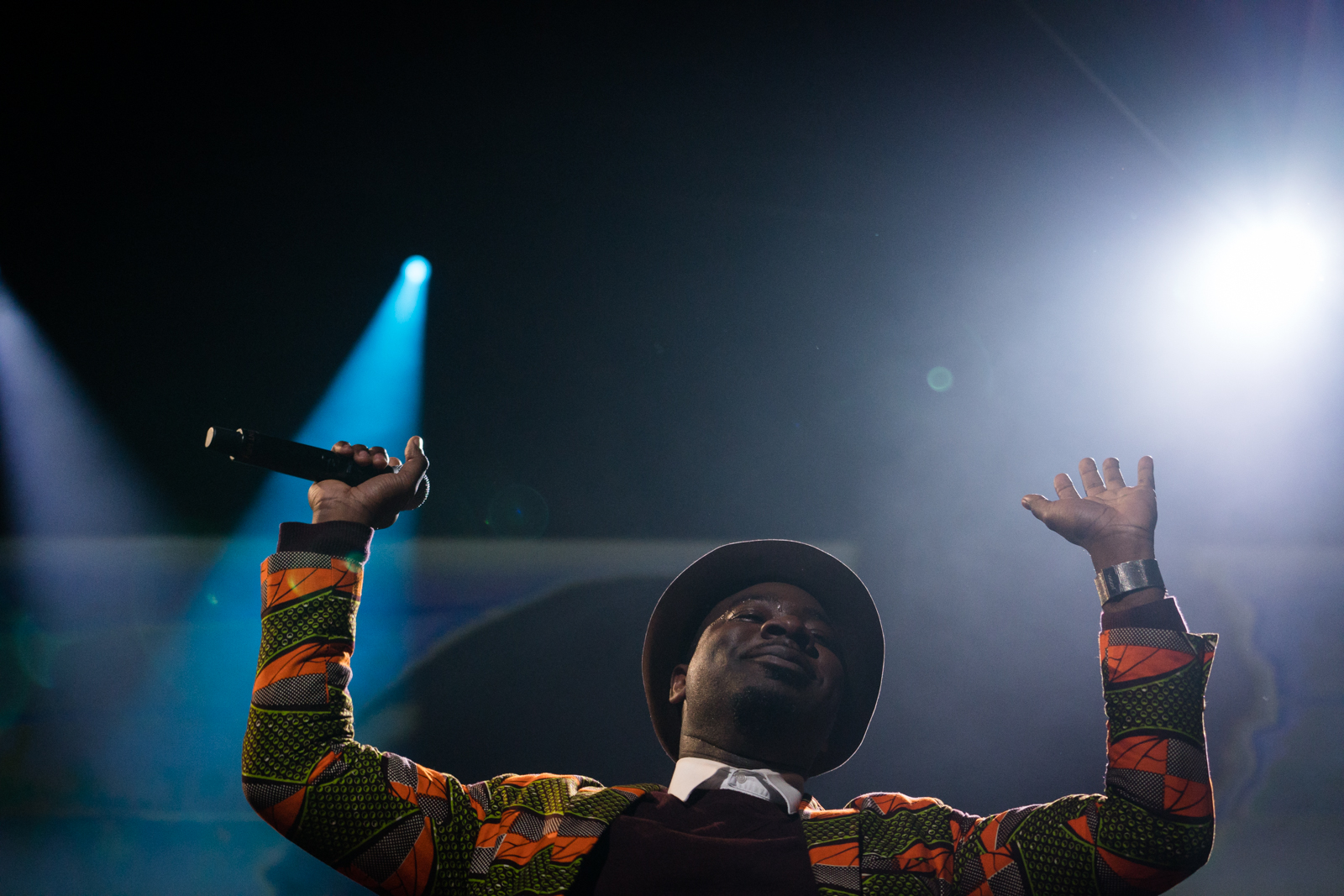