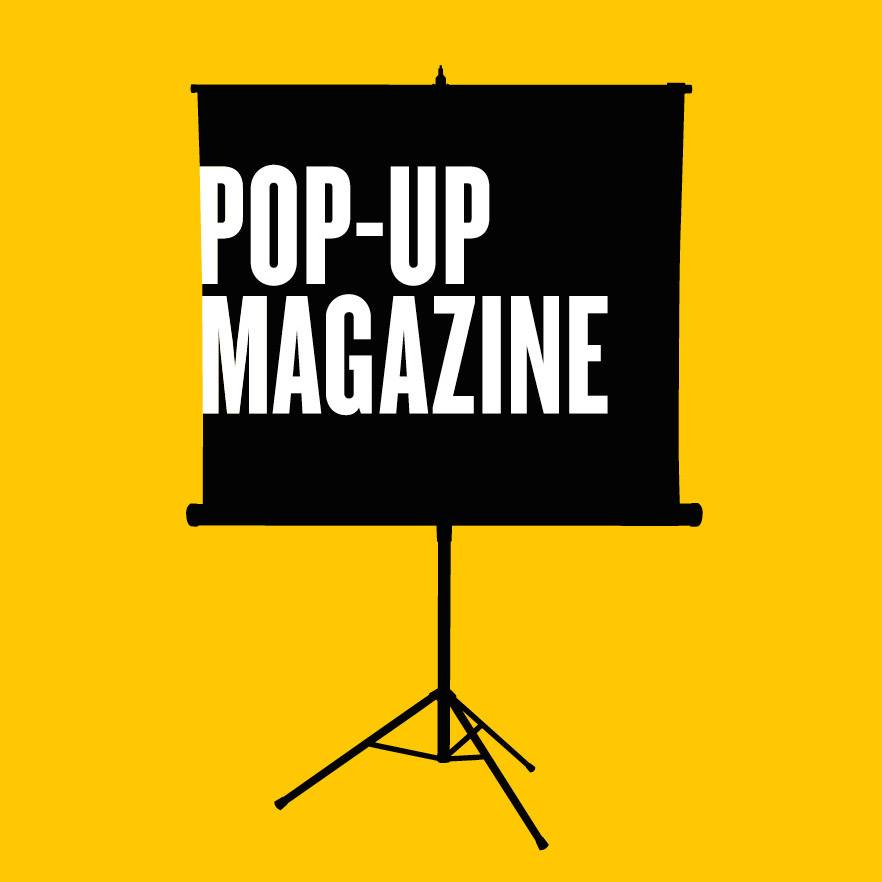 The glossy pages of magazines offer fascinating people, absorbing stories and photos that transport you to faraway places. During Session 8 of TED2015, a magazine will spring into three dimensions on the stage, thanks to Pop-Up Magazine.

See, every now and then, we hand over the reins to a guest curator. At TED2011, Bill Gates and Juan Enriquez curated sessions; at TED2012, Chee Pearlman and David Rockwell co-curated a session on design. This year at TED2015, Pop-Up Magazine — a live show that mixes journalism, documentary film, photography, music and more — is our guest.

We spoke to senior editor Pat Walters and editor-in-chief Douglas McGray to find out exactly what to expect.

How would you describe Pop-Up Magazine to those of us who have never experienced it before?

Pat Walters: We call it a live magazine. Our basic goal is to put a bunch of new, unpublished non-fiction stories in front of people in a live situation. We work with all different kinds of non–fiction storytellers — writers, photographers, documentary filmmakers, radio producers, musicians, artists of all sorts — to create a mix of great stories presented in all different kinds of ways. It takes inspiration from the classic idea of a general interest magazine, then uses that as a metaphor for a show.

Doug McGray: We try to find surprising, important narratives. There will be stuff that’s heavy, stuff that’s funny, and stuff that’s beautiful. We art direct the screen in the way a magazine does — so we might hear a really good story idea and connect that storyteller with an illustrator or a photographer, or think about how we can sound design that experience. We’re mixing all these different genres together.

How do you to curate a show? How long does it take?

Doug McGray: We make a lot of phone calls — talk to people we know, and put feelers out for ideas to people we don’t know yet. We want to find stories that are really striking, but that also fit together nicely. In most cases, that doesn’t mean that they directly relate, but that it’s a surprising spread of moods. We can work for quite a while on gathering ideas. We try and have an orderly editorial process of writing on the whiteboard, and trying to think about what else we need. Once we have the ideas, we go into a period of concentrated editing where we work with folks on scripts and think about what their stories are going to look like and sound like.

Pat Walters: The process usually takes three to six months. But I’m looking at the list of stories that we’re bringing to TED, and there are a few where I started talking with the contributors a year ago. Sometimes the conversation goes on for a long time, and then finally the timing works out. Other times, we’ll be at a dinner party with friends and they’ll say, ‘Oh, I just saw this amazing thing’ or, ‘Wouldn’t it be great if you found a way to cover this thing that’s in the news?’ And then we move on it quickly.

What are some of the stories we’ll see on stage at TED?

Pat Walters: I’m going to be purposefully vague, because we try not to let much out of the bag before everybody’s sitting in the theater.

We have some Pop-Up regulars. Sam Green is doing a piece. He’s an Oscar-nominated documentary filmmaker who spent a long time making films designed to be seen in a theater or on a television. Then several years ago, he made an interesting pivot and started creating live documentary films designed only to be seen in a theater. He’s done collaborations with the band Yo La Tengo, and most recently with some wonderful musicians from a sextet in Brooklyn called yMusic. It’s interesting — it’s kind of a concession for him to do a TED event, where it’s going to be filmed. This is now weirdly a fusion for him — a live documentary that will then be filmed.

Another pair that’s been in Pop-Up shows in San Francisco and Los Angeles several times: the Kitchen Sisters from NPR, who are just a legend in public radio and are really fun to have onstage live. They’re famous for these non-narrated documentaries that they put on the radio — but they’re wonderful, vibrant characters themselves. It’s fun to hear the radio that they make, but also have them there in the room. They’ll be premiering a new story.

Then there’s some brand-new people we’ve never worked with before. One of the people that I’ve been talking to for about a year is photographer Alec Soth. He is doing a project with his editor from The New York Times Magazine, Stacey Baker, who is a wonderful photo thinker in her own right. They’ll be presenting a project that’s a little bit personal, but also very outward-looking. Basically, we sent them on a trip together and they made this totally original piece that they’re presenting at TED.

I’m also excited for Dawn Landes. She is writing a musical based on a true story for the Public Theater in New York. She’s going to premiere one of the songs, and tell a bit of the true story that the musical is based on.

You touched on this with Sam Green: Pop-Up is about the ephemeral, live experience. I’m wondering how you reconcile that with the recording that TED requires?

Pat Walters: When we started the show, we were fascinated by this idea of presence and paying attention, and the way that you can bring people together around an experience that’s unique that won’t happen again. We’re still very, very excited by that idea. But we realize that the methodology of mixing stories from all different media is exciting in its own right. So we’ve been thinking ambitiously about what we can do with this.

We’ve been experimenting. We did a show that involved opening a restaurant for one night, where all of the stories were woven through this multi-course meal served by a great chef. We’ve been thinking about other experiences that we can design in the year ahead that are very different but share the common value of bringing people together, mixing different media and creating stories as live performance.

So when we were asked to curate a TED session, we thought it was a fantastic idea. We’ve done a couple of collaborations — we did a show that was all about music with McSweeney’s and Beck, and we partnered with ESPN to create a sports-themed show. TED cares about the live experience in a way that’s feels similar. It seemed like a great, fun opportunity.

What will be different from the usual Pop-Up experience about this TED session, and what will be the same?

Doug McGray: When we first started, Pop-Up Magazine was a format. We took direct inspiration from a table of contents of a magazine — we would have a front-of-book and a feature well. Pieces tended to be short, in a very tight range of one minute to five minutes. But we’ve started to stretch. This is an experiment with longer pieces for us. It’s the kind of stories that we tend to do, but thinking about the life of ideas too. We’re playing with some things that are more like the length of a longer TED Talk.

Pat Walters: In the next year or two, we want to start to move beyond the conventions of the theater. We’re interested in taking the show to different places — taking it outside, or inside different kinds of buildings. Considering: do people need to be sitting still the whole time, or do we have them moving around? Are they primarily listening and watching something, or are they also talking to each other and interacting with one another?

What have been the biggest challenges of getting ready for TED?

Pat Walters: It’s the normal challenge of creating a 100-minute show that has 12 or 13 different moving parts. We have several stories this time that are longer, so that’s made it a more complicated situation — though one that I’ve really enjoyed.

Historically, we’ve rehearsed stories individually. We do bits and pieces with people, and then it all comes together live. But as part of this period of experimenting, we’ll do a bit more sequential rehearsing for this. It’s also figuring out how these stories will look when they’re filmed. It’s been interesting talking to the TED staff about that, since it’s a challenge that all of you deal with every year — finding a way to balance the experience for the audience in the room with that of the audience who will be watching on the internet.

Of the stories that’ll be told in the TED session, which will make people see something differently?

Pat Walters: Steve Silberman, who’s a contributing editor at Wired and just a fantastic writer. He has been working on a book about autism for the past five years, and it comes out this summer. He’s going to premiere some of the big ideas from it. He’s spent a long time articulating a totally new way of thinking about autism.

A very different example: Anand Varma, a young National Geographic photographer whose career is taking off. He’s doing a story for National Geographic that’s coming out in May about bee decline. It’s a story that we all know a little bit about, but no one will ever have seen it the way that Anand is going to show it. I think it’s really fun when you can find a story that everyone thinks that they know, and present it in a way that is very different.

But honestly, I hope that all of these stories will make people see something differently. Looking through the list here, I feel good about that.