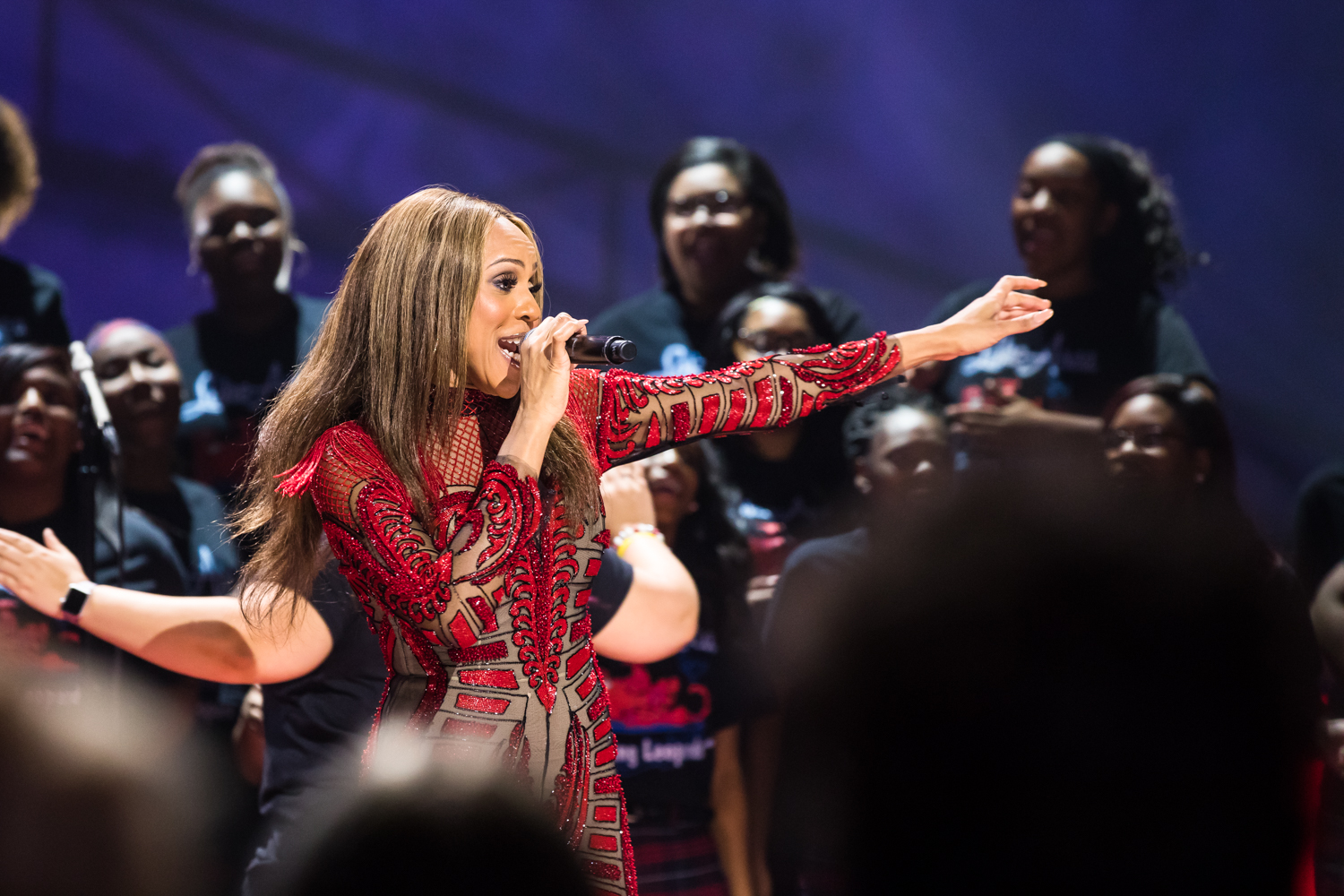 “We build them, we cross them, sometimes we burn them.” TED Content Director Kelly Stoetzel kicks off TEDWomen 2017 with an explanation of how she and conference curator Pat Mitchell developed this year’s rich conference theme, Bridges. “Over the next three days we’ll hear talks from artists and architects, entrepreneurs, scientists and activists,” she continues — the usual TED fare, in other words, given a special TEDWomen twist. In this session, “Build,” we find ideas of power, empathy, ingenuity and radical humanity, to name a few. So let’s get cracking. 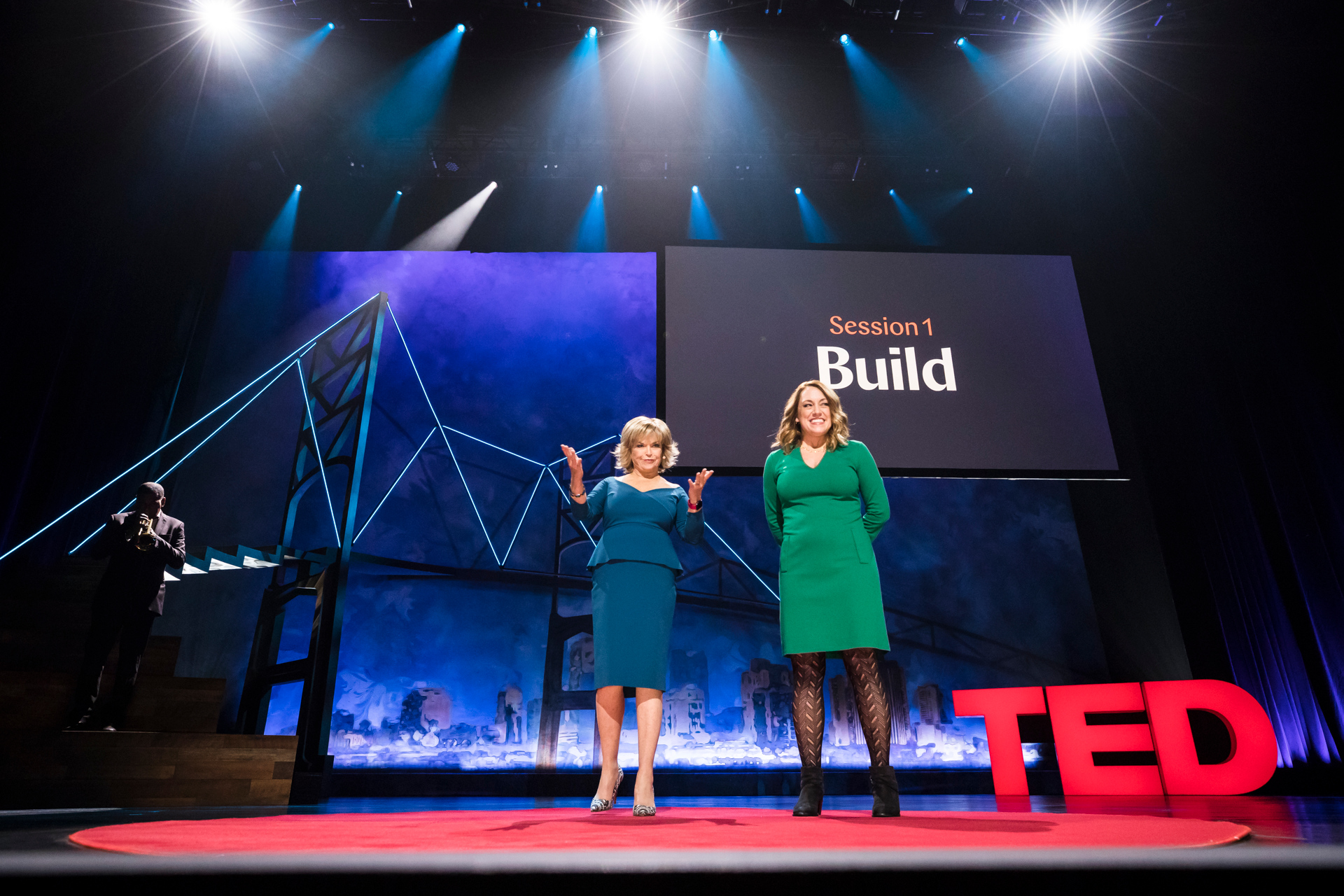 I’m every woman. This fall, the powerhouse vocalist Deborah Cox is starring in the national tour of The Bodyguard, a musical based on a movie starring the late great Whitney Houston, who sings a song first popularized by the great Chaka Khan that was co-written by the songwriting legend Valerie Simpson (of Ashford & Simpson)  … That chain of strong women’s voices just got 50 voices stronger, as Cox opens with a stunning take on “I’m Every Woman,” joined by the young women of the Lake Area Girls Choir. Their combined voices rock the audience right out of their seats, echoing up through the balconies of the historic Orpheum Theater.

Be the first domino. Self-proclaimed professional troublemaker Luvvie Ajayi tamed her fears by conquering them in the boldest ways possible — deep-sea diving, skydiving and ziplining across forests. In this, the first full talk of the conference, she encourages others to do the same, to be the first domino causing a chain reaction. “Being the first domino is doing or saying what is difficult, because that is usually when it’s needed,” she says. However, she adds, we can’t simply rely on those who have traditionally spoken up and out to ignite social change. Instead, she call for us all to fearlessly embrace who we are as a revolutionary act, to become fellow troublemakers and speak truth to power despite trepidation. 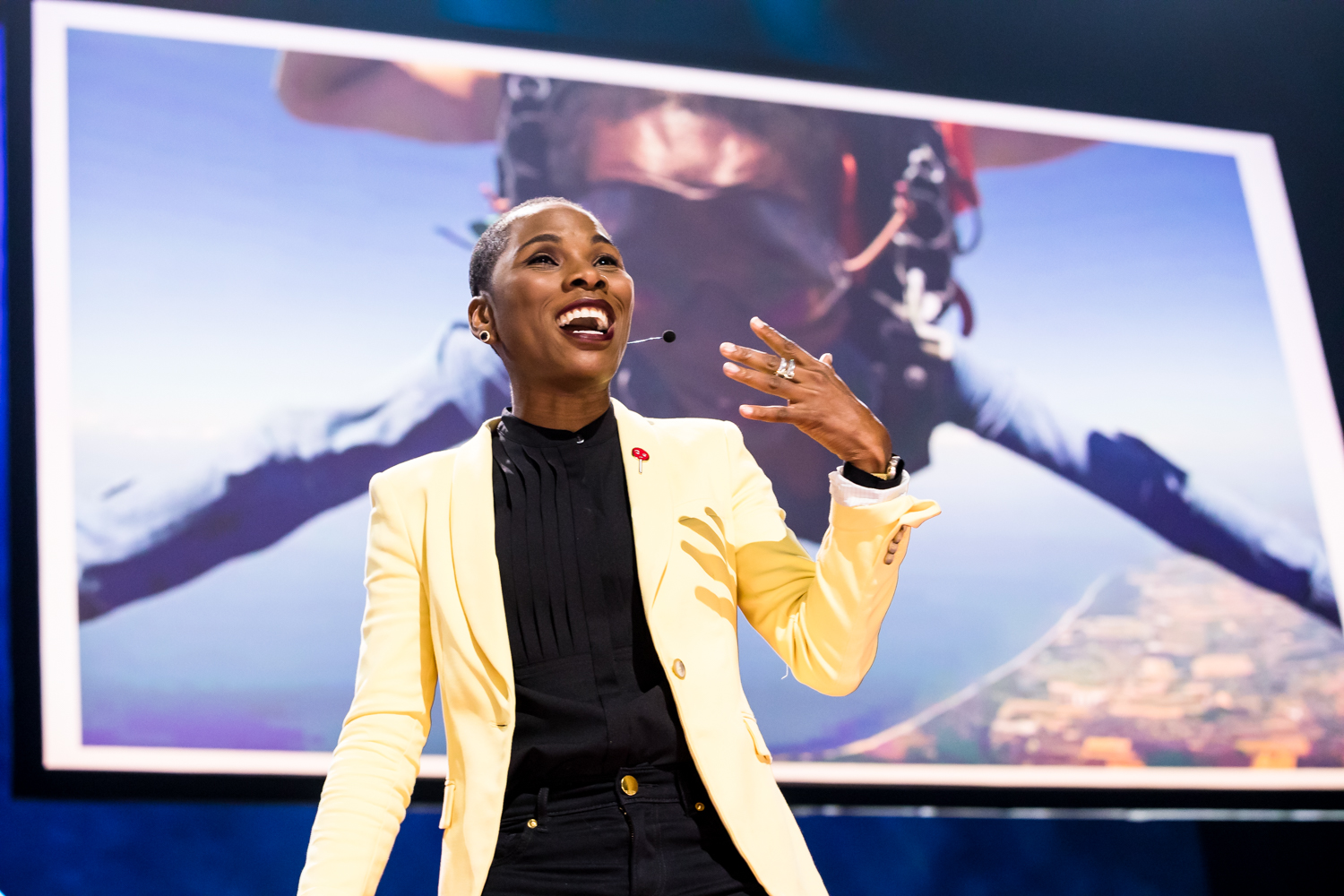 Why did Luvvie Ajayi jump out of a “perfectly good plane,” she asks? To face her fear in the boldest way possible. She speaks at TEDWomen 2017: Bridges, November 1-3, 2017, Orpheum Theatre, New Orleans, Louisiana. Photo: Ryan Lash / TED

Footbridges that connect people with opportunity. Avery Louise Bang found her calling when she traveled in Fiji as a college student and saw communities mired in isolation because of the rivers, canyons or peaks separating them from the rest of the world. Without an easy way to cross these expanses, people struggled to send their kids to school or reach medical care. Bang resolved to help, and studied engineering before joining the Denver-based nonprofit Bridges to Prosperity, which has now built 270 bridges in more than 20 countries, connecting nearly a million people. But their work, she emphasizes, is less about constructing spans of steel, stone and mortar and more about transforming lives by giving them access to a larger world. She calls on countries and philanthropists to prioritize connecting the estimated one billion people on the planet still stranded due to geography. As she says: “Poverty due to rural isolation is a crisis we can solve in our lifetime.” 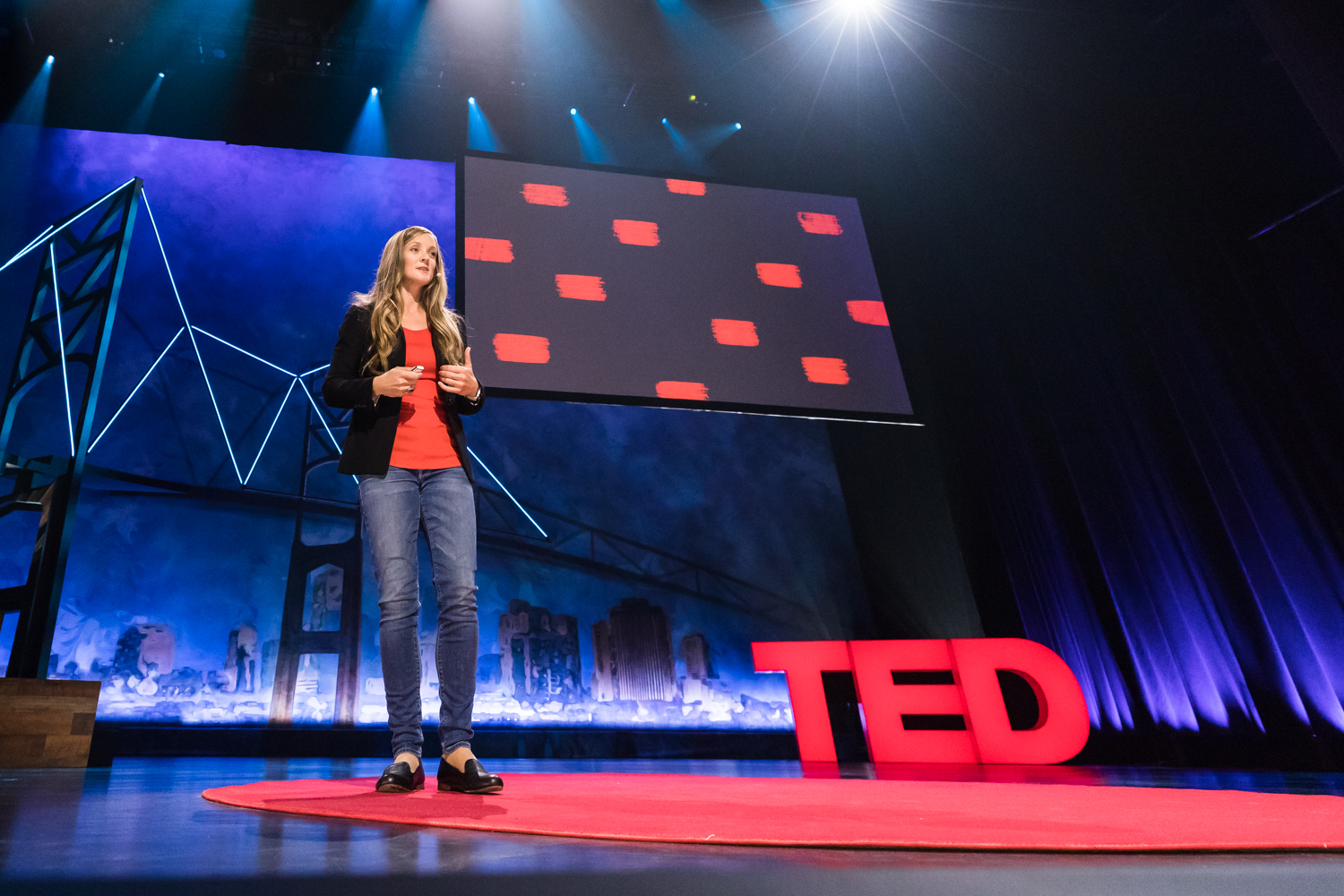 Justice has geography too. Liz Ogbu is a trained architect, but she likes to say she works in spatial justice. What’s that, you ask? Well, she says, it’s a way to remember that all too often justice is impacted by geography. That’s right, she’s talking about gentrification — from the perspective of those displaced by it, not those looking to “fix” it. Ogbu questions the troubling assumption that some people (traditionally the poor or disenfranchised) will inevitably be pushed out when development and progress come knocking. “Why is it we treat culture erasure and economic displacement as inevitable?” she asks feistily. Instead, developers, architects, designers and policy makers must think differently about development, to “make a commitment to build people’s capacity to stay … to stay in their homes, to stay in their communities, to stay where they feel whole.”

Can we heal the Gulf of Mexico? Tonight, ocean expert Nancy Rabelais is speaking onstage; by Friday she’ll be back at work, diving the Gulf of Mexico to track the ominously named Dead Zone — a zone without enough oxygen in the water to support life. The Gulf has the second largest Dead Zone in the world, the size of New Jersey (“not to brag,” says Nancy), and on top of killing fish and crustaceans, it’s killing the traditional fisheries in these waters. Here’s the troubling reality: the Dead Zone is caused mainly by excessive nitrogen and phosphorous, the Mississippi-borne runoff of corn and soybean farms hundreds of miles upstream. How to help US Midwestern farmers care about shrimp fisheries in the Gulf? By speaking out and showing the connection between algae-poisoned water in Toledo, Ohio and the dying life on the bottom of the Gulf. Nancy is working to build across-the-aisle support for cleaning up the Gulf’s waters and restoring one of America’s treasures. 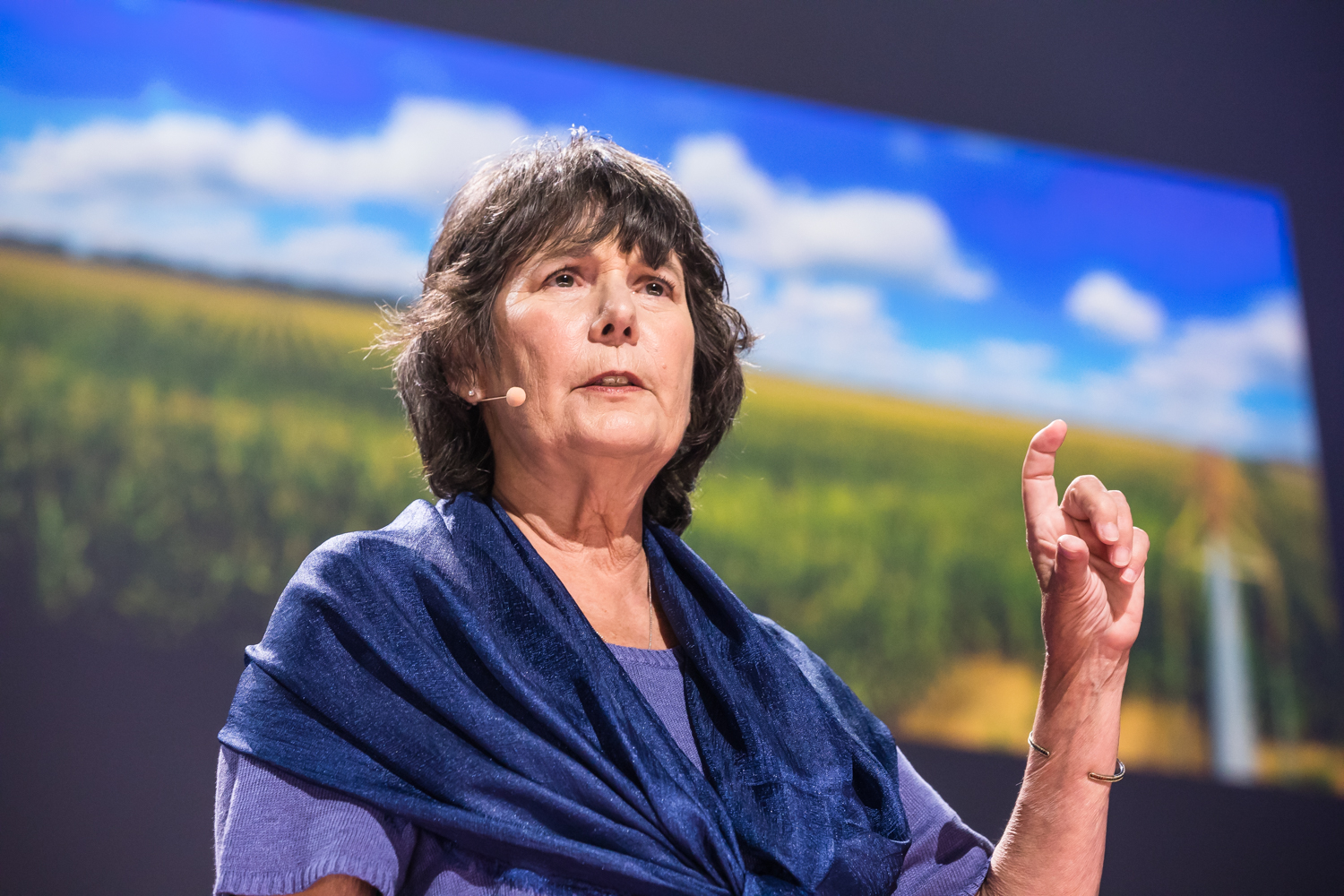 Justice is our responsibility. The United States incarcerates more people than any other country in the world, says Eve Abrams, producer of Unprisoned, a podcast about the prison system. However, between one and four percent of those in prison are likely innocent. That’s 87,000 brothers, sisters, mothers, and fathers — predominantly African American — unnecessarily separated from their families, their lives and dreams put on hold. Using audio footage from her interviews, Abrams shares the touching stories of those with incarcerated family members, and calls for us all to take a stand to ensure that the justice system ultimately works for everyone. “Justice is hard to come by,” she says. “If we don’t like what’s going on, it’s up to us to change it.”

Helping every mother have a healthy birth Christy Turlington Burns remembers the moment her just-born daughter was placed in her arms for the first time, a magical moment that was quickly shattered when her third stage of labor (when the placenta expels) did not go as planned. Surrounded by the best medical care, she lost almost a quart of blood as doctors and nurses worked to resolve her condition. She’s fine now — in fact, she was home with her baby within 24 hours. But as she found out, what happened to her is one of the leading causes of maternal death in the world. Burns resolved to help. Her nonprofit, Every Mother Counts, targets maternal health in a number of straightforward, practical ways. None of this is a mystery — we know how to help moms survive childbirth, and most of the interventions are low-cost and proven. Now we must find the will to do them, for every mother in the world.

Where to begin. Artist and poet Cleo Wade recites a moving poem about being an advocate for love and acceptance in a time when both seem in short supply. Interwoven with stories of individuals at the beginning or end of their lives, she shares the inherent truths that come with aging and reflects in the wisdom of a life well-lived. Wade leaves the stage with a simple yet enduring takeaway: be good to yourself, be good to others, be good to the Earth. “The world will say to you / ‘Be a better person’/ Don’t be afraid to say yes,” she says.

That’s it from TEDWomen for tonight. Up tomorrow, a whole host of more extraordinary stories and insightful ideas. Stay tuned, and night from New Orleans.