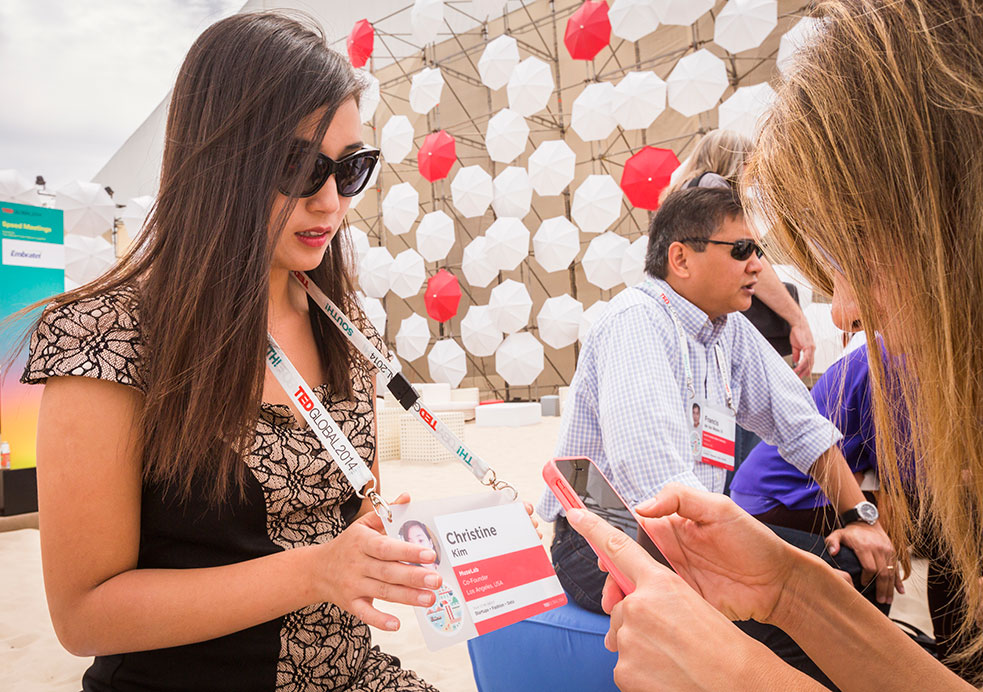 The goal of our conference app, TEDConnect? To get you to put down your phone and talk to people.

“The idea is to foster in-person connection — to allow attendees to find one another, to meet, to have interesting things to talk about,” says Will True, our product development manager who helped create the app, available for both iOS and Android. “TED is such a social experience. We wanted to add to that rather than distract from it. We wanted it to be a means of making contact and getting information, and then putting the phone away.”

The idea of creating an app for TED conference attendees has floated around our technology team for years. Since many other conferences were building apps already, the team at first hoped to use a third-party product. But most of these apps focused on linking attendees with the social media backchannel, helping attendees choose among multiple concurrent speakers and sessions, or prompting them to give feedback — all useful, but not quite right for us. So we brought the project in-house.

After prototyping the app with MetaLab and testing out ideas at conferences throughout 2011 and 2012, the official TEDConnect app debuted at TED2013. The first version contained the usual conference app features — schedules, maps, a list of speakers — but also bells and whistles around the idea of connection. The app included a list of all attendees, complete with photos and bios, and gave people the ability to message each other through it.

Each attendee also got a specially curated TED Top 10. True says of this popular feature, “We take an attendee’s profile information and put it into a secret algorithm that comes up with a list of other people that you have a lot of shared interests with. It’s an intimidating thing to come in and have 1,500 new people around, so we wanted to make it easy to identify potential friends.”

This fall at TEDGlobal 2014, the tech team added two new connection-focused features: Introductions and Badge Scanner. The Introductions feature lets one TED attendee to introduce two other people to one another. Says True, “It allows there to be a warm hand-off of, ‘Hey, you guys should talk about cognitive brain science. Why don’t you meet?’”

As for Badge Scanner, it’s intended for people who meet in real life and want to stay in touch. If two people strike up a conversation, they can scan each other’s badges to add the new friend to their TEDConnect network and easily exchange contact details.

For a seemingly simple feature, Badge Scanner came with some challenges. “It relies on character recognition, and the font libraries are mostly open-source for OCR,” says True. “So we had to make sure that the fonts we use for the badges themselves are recognized by the camera. Also, there have been some interesting discoveries — like that people with three-word names didn’t work at first. We’ve now corrected that.” 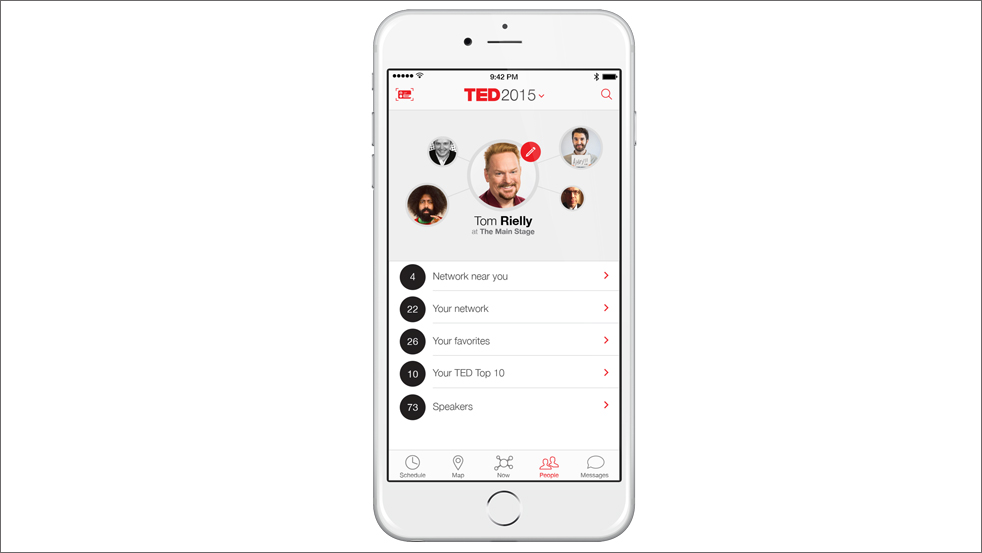 TEDConnect helps TED attendees build a network, which rolls over conference to conference. The app lets them know when people they know are nearby in the venue, and facilitates new friendships by offering a “TED Top 10” of people with similar interests.

At TED2015, the team will launch TEDConnect’s most ambitious feature to date: Whereabouts. As attendees look at a profile or message someone through the app, they will be able to see where in the conference venue they are at the moment. (If, of course, that attendee chooses to be located.)

It solves a problem we discovered when we moved to Vancouver: TED’s venue is laid out in a loop around the central theater, which means that when you are looking for someone, it’s easy to walk in circles trying to find them.

How does it work? At registration, each attendee will get a Whereabouts tag, a Bluetooth Low Energy beacon, along with their conference badge. In rooms around the venue, the team will use Intel Edison computers, akin to Raspberry Pi, that are custom-programmed to use Bluetooth radios to scan for these beacons. The room readers send information about which beacons are nearby and how strong the signal is to TED’s Event Management System, which then triangulates the attendee’s location. The Edisons are only located in the main conference areas — in other words, not in the bathrooms or the hotels.

Attendees can make their location known to all others at the conference, or just to people in their chosen network. And if an attendee has zero interest in using Whereabouts, they can opt out and disable the feature, or simply hand in their tag at the registration desk. “It’s made to be privacy-conscious. The beacons themselves send out a signal with a unique identifier that’s really only relevant to us — it has no personal information attached,” says True. “The room readers don’t know who’s who, they just pull up tag numbers.”

“Nobody’s really doing what we’re doing with this. We’re flipping the model,” he says. “Normally, people would place beacons around a venue and rely on users’ phones to ping when they’re near. But since we have this focused, small attendee base, we can use the beacons to make it more inclusive. The set-up allows attendees to participate regardless of how new their phone or operating system is, and doesn’t require users to leave Bluetooth on.”

“We have to make sure we’re not trampling on the wifi,” says True. “We played with a lot of different beacons from a lot of different manufacturers before we settled on the one that we did. It plays well with others … We build out a top-notch network, but still, we design everything to fail gracefully. Even if you don’t have an active connection, you can still retrieve information.”

The team has also been hard at work improving a feature they rolled out at TED2014 called simply Now. This feature lets attendees see all the things going on at the conference at that specific moment. “We really try to be respectful, and don’t want to be buzzing attendees’ phone constantly. This is a passive way of notifying them of what’s happening,” says True. “To make sure that they know about that discussion with a speaker nearby, or that buses are boarding for an event, or that photos have gone up on Flickr from a previous session.”

And they have also streamlined a feature that debuted at TEDGlobal 2014: the ability to Heart talks. If an attendee loves a talk she just heard, she can click on the little heart next to it in the session lineup; then, when the talk posts on TED.com later on, she’ll get an email notification.

At TED2013, its first time out of the gate, about 75% of attendees were active users of TEDConnect. At TEDGlobal 2014, that percentage increased to 84%. “Our attendees tend to be early adopters, so they’re quick to embrace something like this,” says True. “It just took a little while to convince people of the benefits.”

Like at both of those conferences, over the course of TED2015, attendees will send scores of messages to each other using the app. And True hopes to see again something that he noticed after TEDGlobal 2014: that people were sending messages through the app well after the conference ended. “We see quite a long tail of messages,” he says.

To him, this means that the app is achieving the goal — that it is helping attendees get to know people who will become friends and collaborators in the long run.