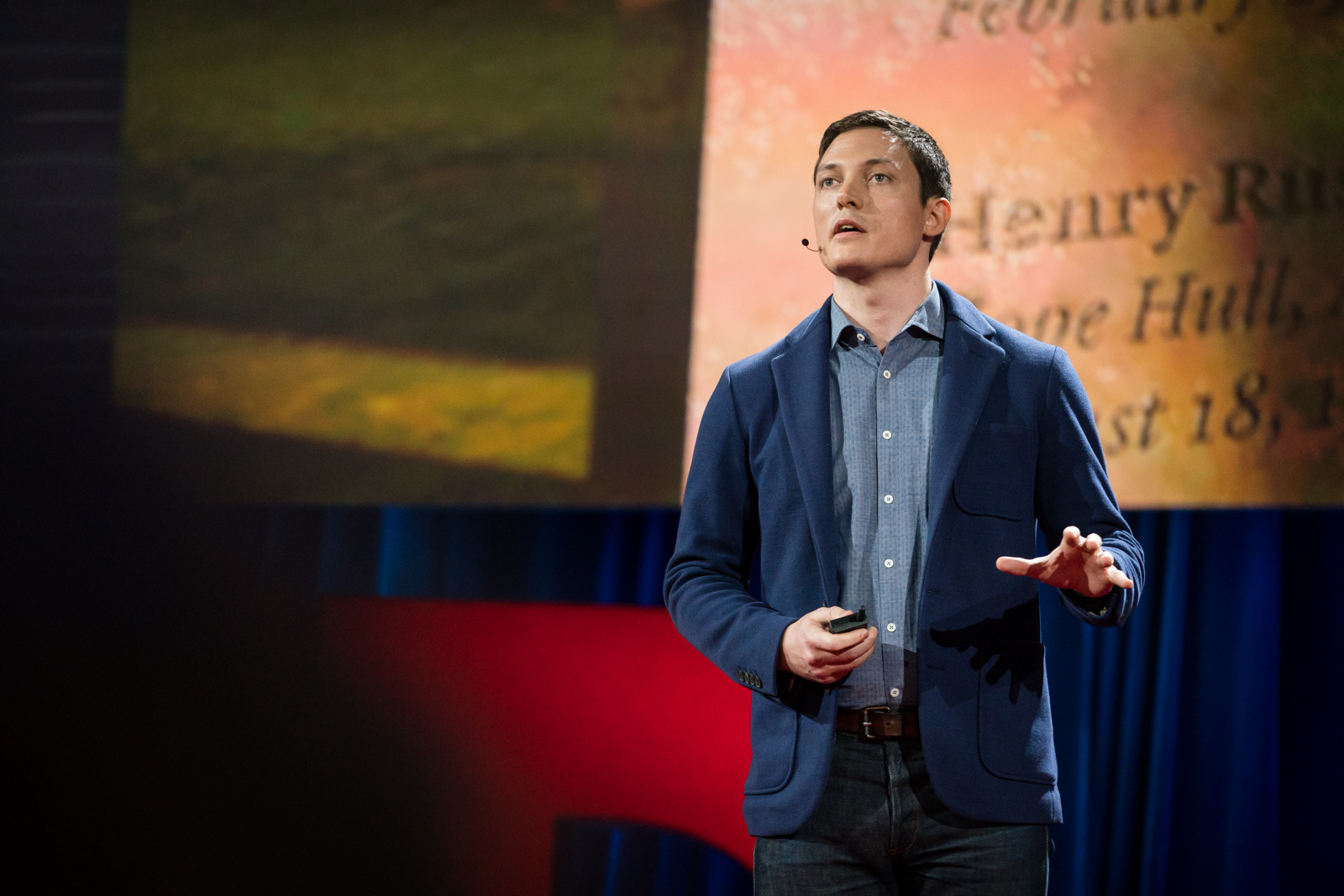 Architect Michael Murphy is working on a design for the first US memorial to racial injustice — an idea inspired by past TED speaker Bryan Stevenson. Murphy spoke onstage at TED2016 on Wednesday, February 17, 2016. Photo: Bret Hartman / TED

Not every dream is good. Sometimes dreams terrify you to your core, and you wake up in a cold sweat confused to find yourself safe in bed. In Session 8, we turn our attention to “Nightmare?,” from gun violence to the state of the climate. But it’s not all doom and gloom — the speakers in this session offer real ways forward.

Recaps of the talks in Session 8, in chronological order.

The will to act is in itself a renewable resource: Al Gore has three questions about climate change and our future. The first: Do we have to change? Each day, the accumulated amount of human-made global-warming pollution traps as much extra heat energy as would be released by 400,000 Hiroshima-class atomic bombs exploding. Almost all of that heat is absorbed by the oceans, leading to stronger storms and floods. “Every night on the TV news now is like a nature hike through the Book of Revelation,” Gore says as a video of massive flooding in southeast Spain plays behind him. Climate change also has geopolitical consequences, as droughts and failed crops lead to political instability; it’s even helping microbial diseases propagate. So, yes, we have to change. The second question: Can we change? We already have, Gore says. Wind, solar and battery power have exceeded projections by orders of magnitude. Renewables are overtaking fossil fuels, and the developing world is skipping over landline electricity in favor of business models such as pay-as-you-go solar. “Renewable energy is the biggest new business opportunity in the history of world,” Gore says. The last question is trickier: Will we change? Thanks to the Paris Agreement, a cap-and-trade commitment by China and the closure of coal power plants in the United States, signs point to yes. “When any great moral challenge is ultimately resolved into a binary choice between what is right and what is wrong, the outcome is foreordained because of who we are as human beings … That is why we’re going to win this.”

Why haven’t we ended extreme poverty? “The greatest failure of the human race is that we’ve left one billion of our members behind,” says social entrepreneur Andrew Youn. Even in an era of technological advance like ours, hunger and extreme poverty are still huge issues. The good news, though, is that we can solve these problems. Exactly half of the world’s poor are small farmers, who don’t have access to tools and research that would make their crops more productive: hybrid seeds for resilient crops, fertilizer to increase growth, and information on ideal crop spacing. “Humanity actually solved the problem of agricultural poverty a century ago,” says Youn, “We just haven’t delivered these things to everybody just yet.” That’s what his nonprofit, the One Acre Fund, aims to do. They buy seed and fertilizer in bulk, rent trucks to deliver them to farmers, allow farmers to pay for products slowly and surround it all with training. They serve 400,000 families using a system of local field officers. The model is scalable, he says, because sub-Saharan Africa’s farmers actually live in a highly concentrated area. “It’s like Amazon for rural farmers,” he says. “Wherever we deliver services, farmers use our tools to climb out of poverty.” 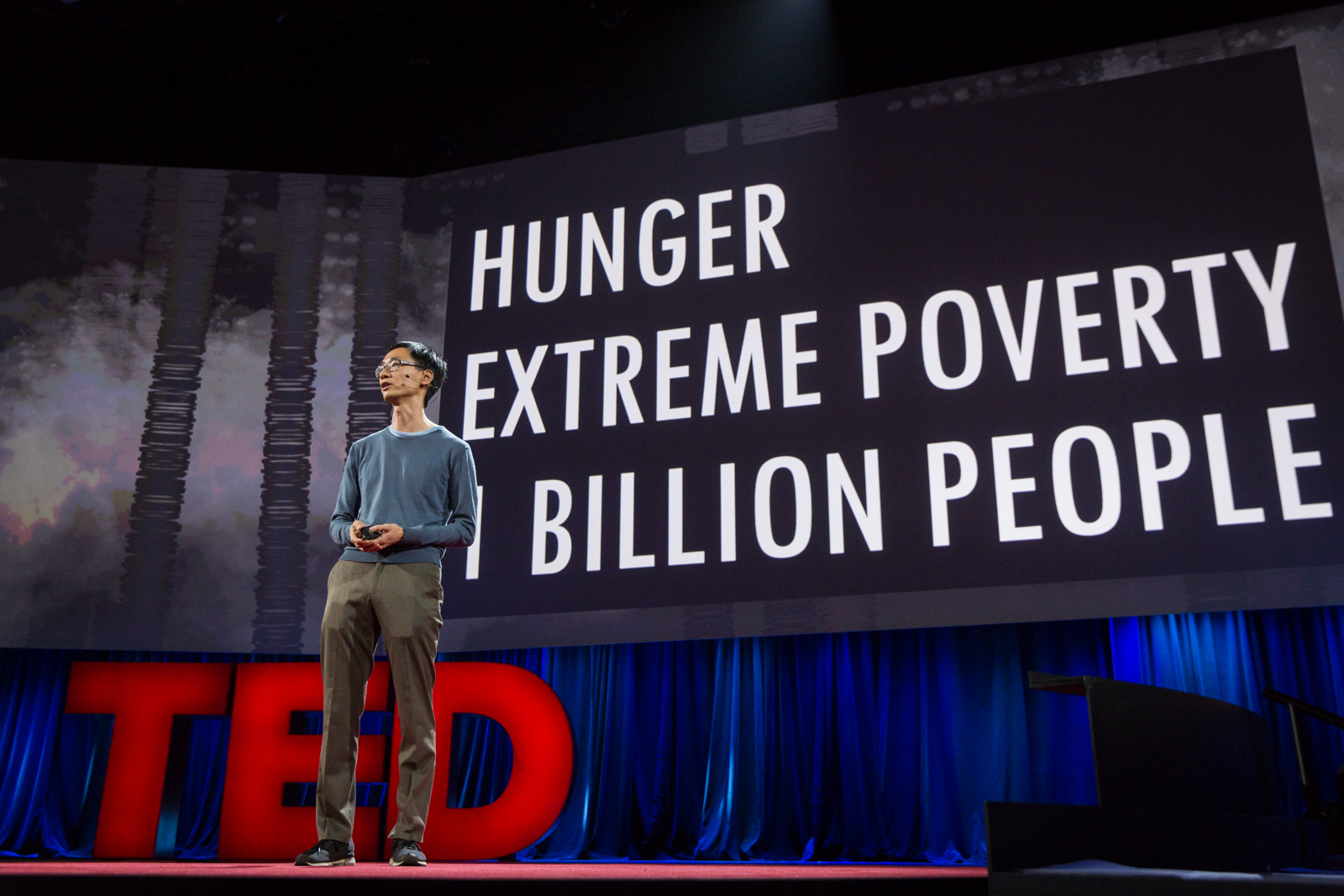 Are we gods now? CRISPR, which makes gene editing so cheap and easy a talented high schooler could do it, is the latest technology that promises to radically change the world. But what exactly can it do, and what are the potential dangers? Journalist Jennifer Kahn explains with an aptly amazed/terrified tone. Read the full recap.

Soul, history and song. Standing powerfully center stage, musician Rhiannon Giddens began with the song “Waterboy”: “Where are you hidin’? / If you don’t come right here / I’m gonna tell your pa on you.” Her resonant, soulful vocals mix with thunders of bass and drums, blending country blues and soul. Next, she shares a powerful song, underpinned by a spare plucked banjo line, whose lyrics are inspired by the narratives stories of slaves. Between songs, Giddens explains her style of bringing history to life through song, drawing inspiration from documents and diaries that bring to life the individual humans whose stories become part of our larger history. With that, she ended with “Up Above my Head,” a staple from the legendary guitar pioneer Sister Rosetta Tharpe. “And I really do believe / I really do believe / There’s a Heaven somewhere.”

The lie of the gun lobby. Advertising executive Dan Gross’ life changed in 1997 when his brother was shot in the head, in a random shooting at the Empire State Building. His brother survived, but he is still recovering to this day. “I often think of how much worse it could have been,” he says — which is why he feels such compassion for the 90 families a day who lose a loved one to gun violence. He wanted to do something, and he realized that the same thing that made him good at advertising — his ability to find common ground — could help him understand the common ground between people who love to hunt and anti-gun activists. Turns out, they both want to feel safe. But the gun lobby can capitalize on this to sell more of their products — and they don’t mind stretching the truth to make a sale. For instance, ten years ago, 42% of American said that guns make homes safer. Today that number is 63%, though statistics suggest that keeping a gun at home actually increases your danger. “If you tell a big enough lie enough times, eventually that lie becomes the truth,” says Gross. But Gross thinks the gun lobby’s power is starting to crumble. The president of the Brady Campaign, his goal is to cut the number of gun deaths in half in the US by 2025 and to get Congress to finally take stronger action. “Congress is almost always the last to wake up and realize it’s on the wrong side of history,” he says. “And when they do, it’s always because the American public shakes them.” 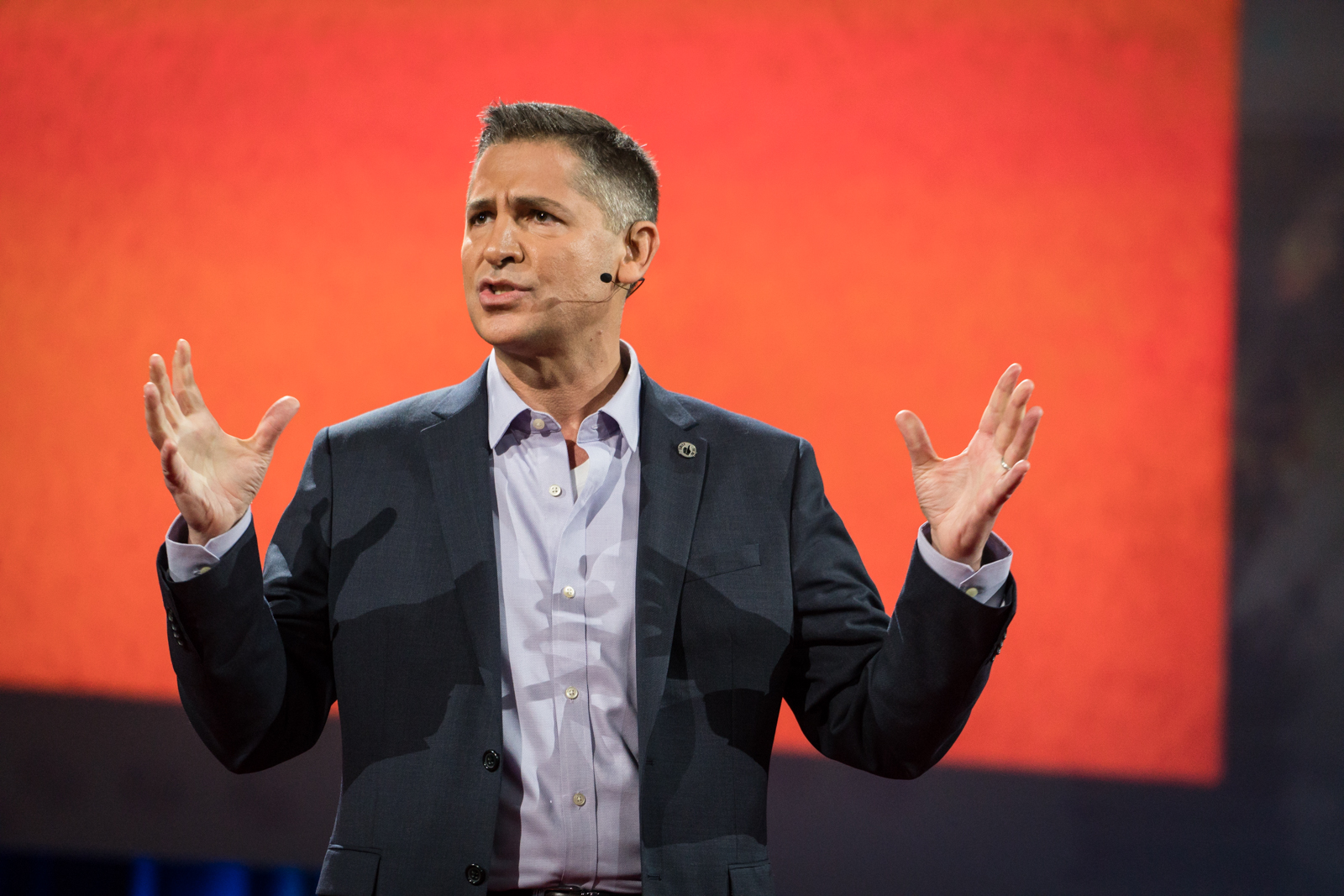 Dan Gross was an advertising executive — until his brother was shot in the head by a random gunman. Now he’s dedicated his career to ending gun violence. He spoke onstage at TED2016 on Wednesday, February 17, 2016. Photo: Bret Hartman / TED

Architecture as an engine for change. As part of MASS Architects, Michael Murphy designs buildings that help people to heal — hospitals, schools, clinics. But his latest project may be his most ambitious one yet. He’s teaming up with civil rights leader Bryan Stevenson to memorialize America’s history of racial injustice. “Countries like Germany, South Africa and Rwanda have found it necessary to build memorials to reflect on the atrocities of their past,” Murphy says. “We have yet to do this in the United States.” The memorial breaks ground in Montgomery, Alabama, later this year, and its design takes cues from classical architecture, like the Vatican’s colonnade — but upon entering, the ground drops and perception shifts as visitors realize that what appeared from afar to be columns holding the structure up are actually markers that hang from the ceiling. Just outside the memorial will be a field of identical columns, waiting in purgatory to be placed in the very counties where the killings they memorialize occurred. “Over the next few years, this site will bear witness.” Murphy says, “As each of these markers is claimed and visibly placed in those counties, our nation will begin to heal from over a century of silence.”

Toward a truly free United States. Bryan Stevenson of the Equal Justice Initiative makes a surprise appearance to show his support for Michael Murphy’s project. “I really believe that in America, we’re not free,” he says in a brief talk. The racial injustice that pervades our history is something we simply don’t talk about. Says Stevenson, “I don’t believe that slavery ended in 1865; it evolved.” Decades of segregation have evolved into what we have today, where black and brown kids are assumed to be dangerous and guilty. We need to address this history, says Stevenson, and that’s why we need projects like Murphy’s. “I believe if we create spaces like this, where we resurrect the truth, we will get to something that feels more like freedom.” 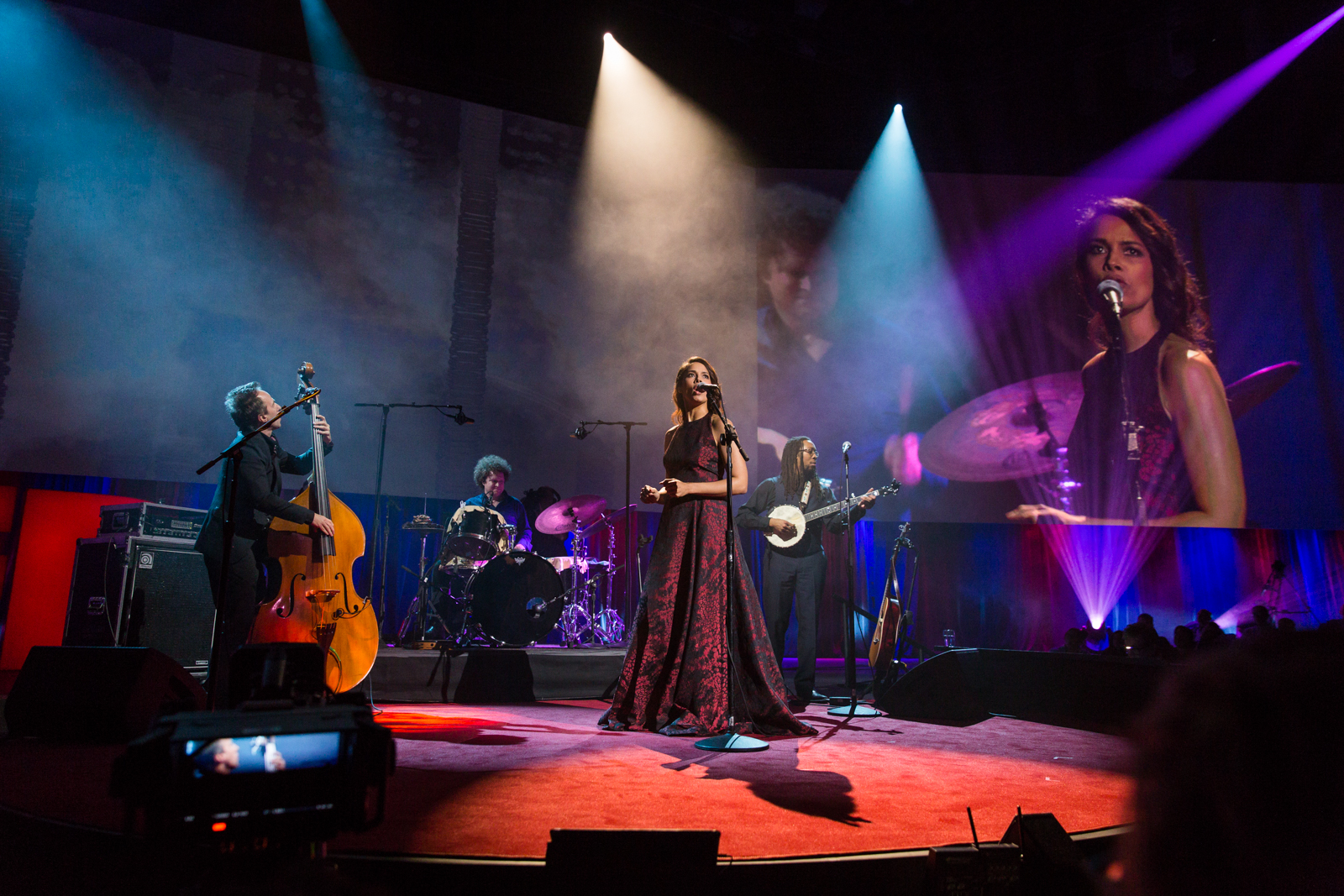