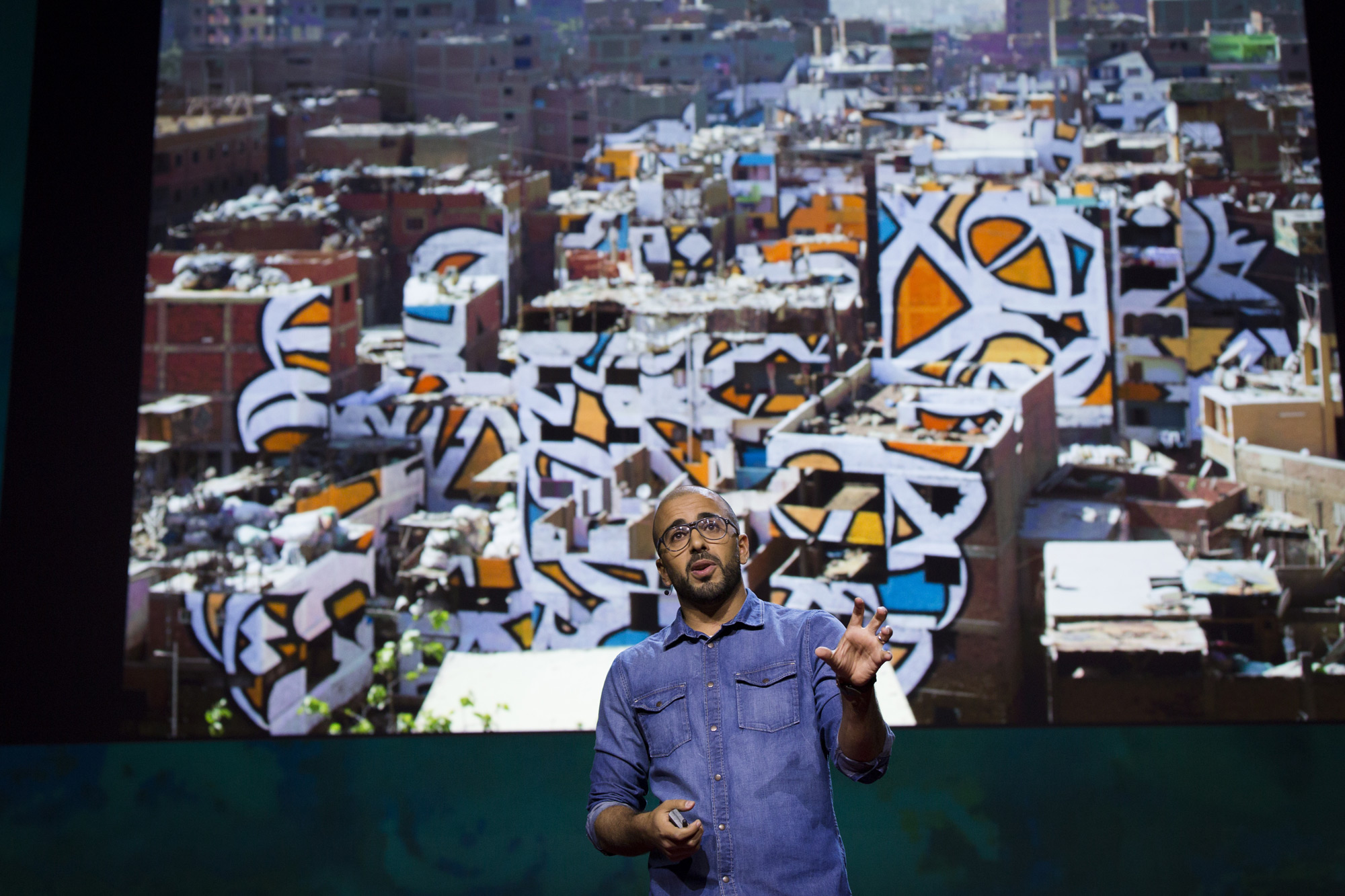 Asrtist eL Seed and his team choreographed an astonishing mural across 50 buildings in a Cairo suburb, viewable only from a nearby mountain. Photo by Ryan Lash/TED.

The TED Fellows program brings together young world-changers from many fields, from art to tech to activism, and encourages them to mix and combine and think big. On Monday morning we heard from a representative sample …

Graffiti’s unifying vantage point. Street artist eL Seed shares the story of his most ambitious project yet: a mural that incorporates 50 buildings in Manshiyat Naser, a district of Cairo, Egypt, which can only be seen from one location — a nearby mountain. Among the massive amounts of paint, lifts and hours needed to complete this colossal piece, Seed and his crew found themselves touched and their notions transformed by the community’s endless warmth and hospitality. For everyone involved in bringing this mural to life, perspectives shifted and new understandings were gained. “It was not about beautifying a place by bringing art to it,” eL Seed says. “It was about switching a perception and bringing dialogue.” Read more about this jaw-dropping mural. 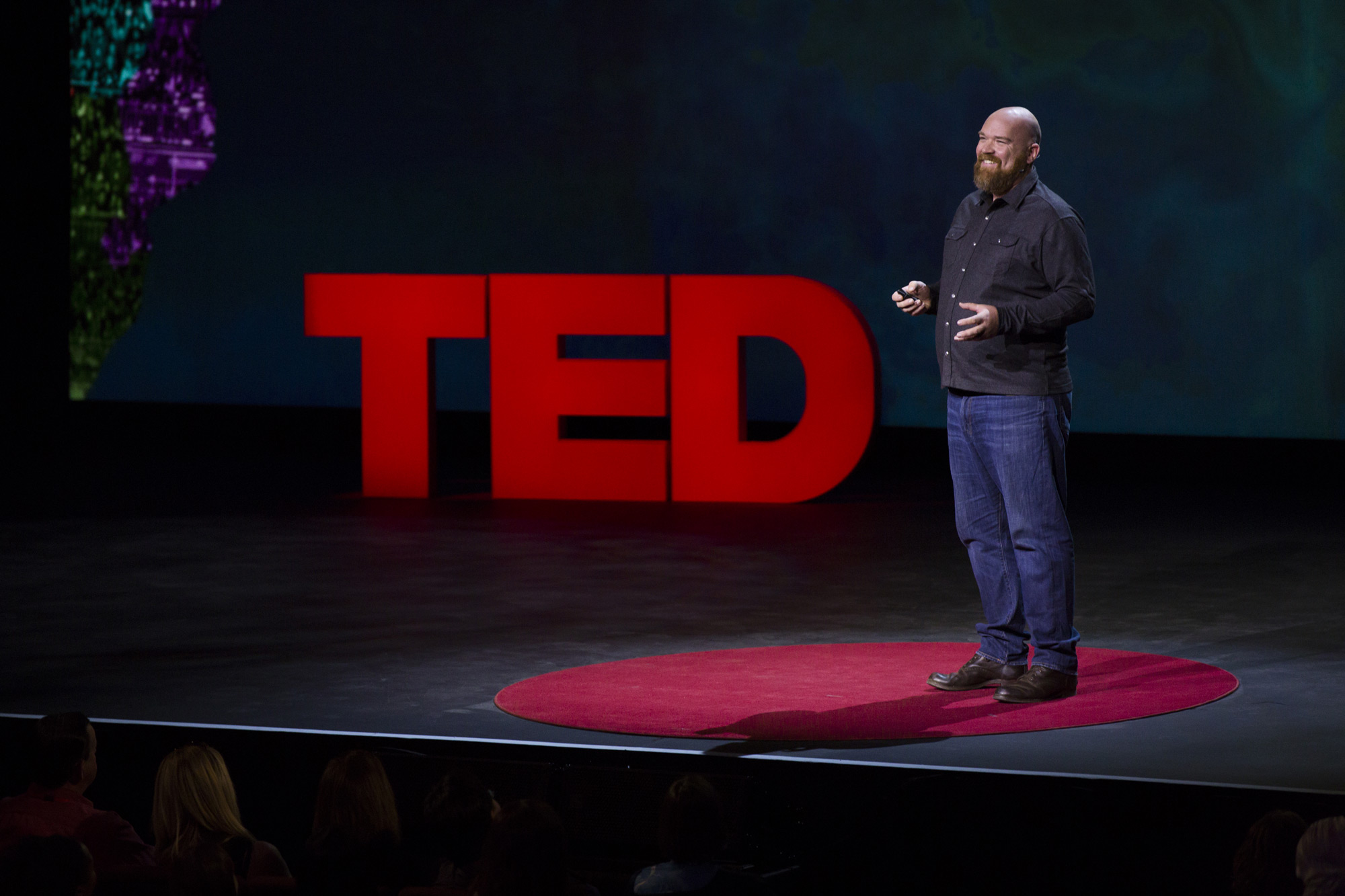 Erik Hersman works to bring free, open Internet to Africa — and asks us to reject half measures like limited-access “free” offerings. Why shouldn’t African nations get the same internet the west has? Photo by Ryan Lash/TED.

How to correctly bring Internet to Africa. The African continent is huge, with more than 50 countries and 2,000+ languages. Bringing widespread Internet connection won’t be as simple as plopping a metal bird — or a balloon, or a satellite — in the sky. Erik Hersman is a technologist who creates platforms for open Internet in Africa. The problem is, not only is Internet penetration very low, only about 30 percent, but often the services available, like Wikipedia Zero and Facebook Free Basics, are very limited “lite” versions, where users can only visit certain approved sites, and can’t share video or music files, for example. Although companies such as Google and Facebook do have growing initiatives to bring access to the world, lack of digital infrastructure for reliable, full Internet is inhibiting open acces … yet it’s what we should be asking for. “Africans want access to the internet just like everybody else in the world, and for the same reasons,” Hersman says — and because of this, innovative and affordable wi-fi solutions for a mobile society are the future.

The widespread damage of cluster bombs. After meeting a young Lebanese refugee named Mohammed, Laura Boushnak became intimately acquainted with the catastrophic consequences of cluster munitions. When released during flight, cluster bombs release hundreds of bomblets, incurring a range of destruction incapable of discriminating between target and civilian. Many of the small bombs fail to explode on impact and thus lay dormant, waiting to harm any unsuspecting farmer or child who happens to encounter the mine by chance. The victims who survive these encounters, like Mohammed, often suffer wounds leading to multiple amputations, which severely hinder their ability to provide for their families, and can also lead to extreme psychological consequences. Because a large portion of these victims live in extreme poverty, they are unable to afford proper care and prosthetics and are forced to rely on humanitarian aid. A number of countries have signed treaties vowing to stop the use of cluster bombs, but major producers, like the U.S., Russia, and China, have not. During the Vietnam War, it is estimated that the U.S. dropped 2 million tons of cluster munitions on Laos alone, of which 9-27 million bomblets may remain unexploded. Although 98% of those affected by these weapons are civilians, major financial institutions continue to invest in companies that make them. Until action is taken, there will continue to be untold numbers of people just like Mohammed, unable to find employment and desperate for any sort of change. 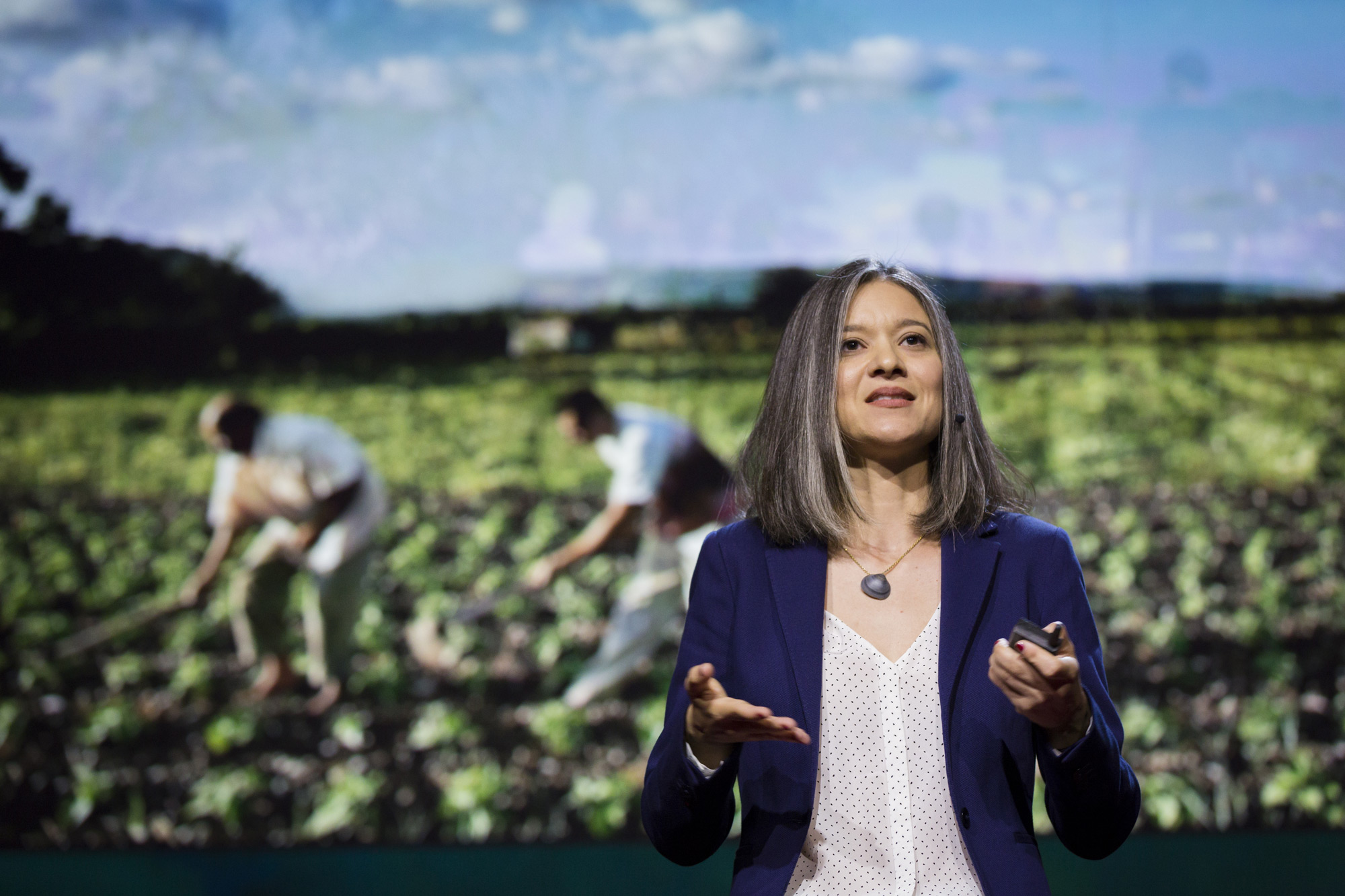 Laura Boushnak speaks on the tragic power of cluster bombs — and why many nations still drop them by the millions (hint: follow the money). Photo by Ryan Lash/TED.

What do you do when you are failed by medicine? Jennifer Brea can tell you. In 2014, while a grad student at Harvard, she came down with a puzzling constellation of symptoms: crippling exhaustion, hypersensitivity to sound, burning sensations — which she was told by doctor after doctor were “all in your mind.” Not buying that story and doing her own digging online, Brea found that millions of people around the world with similar symptoms had been diagnosed with chronic fatigue syndrome, a surprisingly widespread and bewilderingly under-researched phenomenon that (in Brea’s case) is also known as myalgic encephalomyelitis. Nothing has cured her and few treatments have helped — but she’s not taking it lying down, She is making a documentary about people living with the disease, Canary in a Coal Mine, due out in 2017. Just because medicine doesn’t have answers doesn’t mean she’s going to stop asking questions. Read more about her talk.

Invigorating, revitalizing, refreshing. Musician Daniela Candillari opened and closed the Fellows sessions with two spritely, yet grounding pieces on piano. Each arrangement complemented the other, as Candillari’s magnificent, powerful keyboard work intermixed with lighter, more playful notes to create sounds like the cycle of a storm — from the dappling rain and whipping wind of an oncoming tempest, to the reprieve of sunlight peeking through parting clouds.