In Session 2, our speakers debunked received wisdom, looked critically at common knowledge — and restarted conversations we thought were closed. Here, our report:

Antique lamps, new sound. Brothers Ryan and Hays Holladay opened Session 2 completely unseen. In near pitch-black darkness, broken antique lamps lit up one by one — each perfectly matched with an electronic musical pitch. As the melody and tempo changed, so did the rhythm of the light, changing color from white, to red, to purple. With the addition of synthesized claps, the ethereal sound took a slight hip hop beat. After the performance, TED’s Content Director Kelly Stoetzel asked them what their inspiration was, “Initially the idea was to create a small set up to play with color and light in addition to just sound. We fell in love with taking these objects and imbuing them with life, giving them a new functionality.”

African growth is a trend, not a fluke. When economist Ngozi Okonjo-Iweala spoke at the first TED in Africa, back in 2008, she drew our attention to Africa’s surprising growth. Now she returns to the stage to acknowledge that the continent’s rocketship growth of the late 2000s has slowed … and to make the case that growth can get back on track if African nations lean into what Africa as a continent has been doing well — and address eight challenges that might hold back a better future. 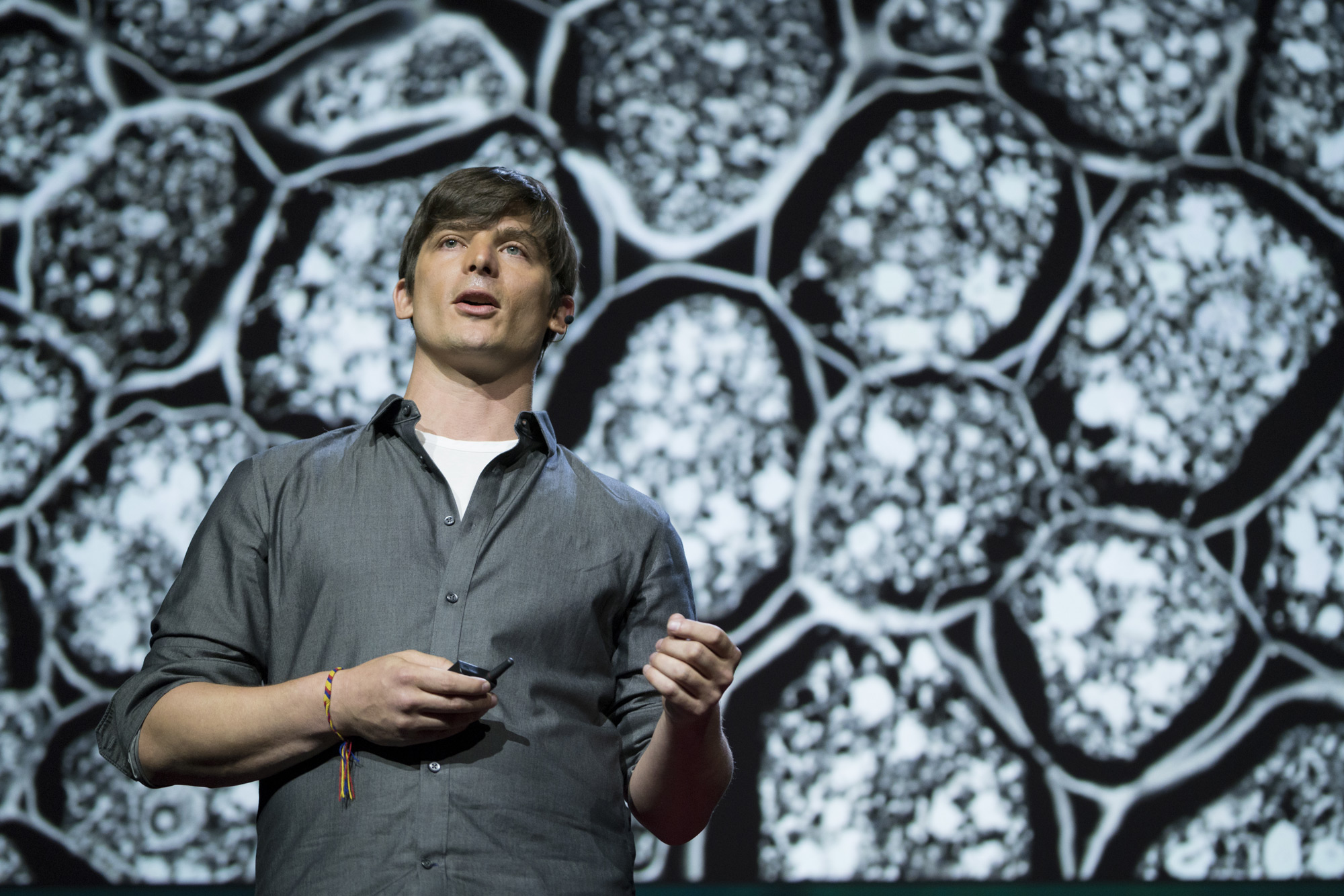 Josh Tetrick wants to reimagine the food system — breaking our addiction to corn, soy and wheat, and looking to exotic grains and plants for the proteins and micronutrients we need. Photo by Bret Hartman/TED.

Starting over in food. After a brush with death, Josh Tetrick woke up and rethought his life. What would you do if you had only 5 years to live? He decided to devote his life to working on issues of starvation, malnutrition and “crappy food” plaguing families and children across the world, to the design of a food system that believes to be “actually aligned with our values.” Tetrick and his colleagues have been working on a platform that allows consumers to search a database of edible plants and find a numerical assessment of their molecular qualities. These qualities then show what plants are well suited for certain tastes and consistencies, and what plants may be able to achieve these tastes and consistencies under the most sustainable and nutritious conditions. For example, the grain to make “a good cookie that uses less carbon, less sodium and less cholesterol” or a substitute for “scrambled eggs that use less water and less arable land.” Through his program, Tetrick hopes to revolutionize the industrial food system to creates food that is both better for our children and the environment. 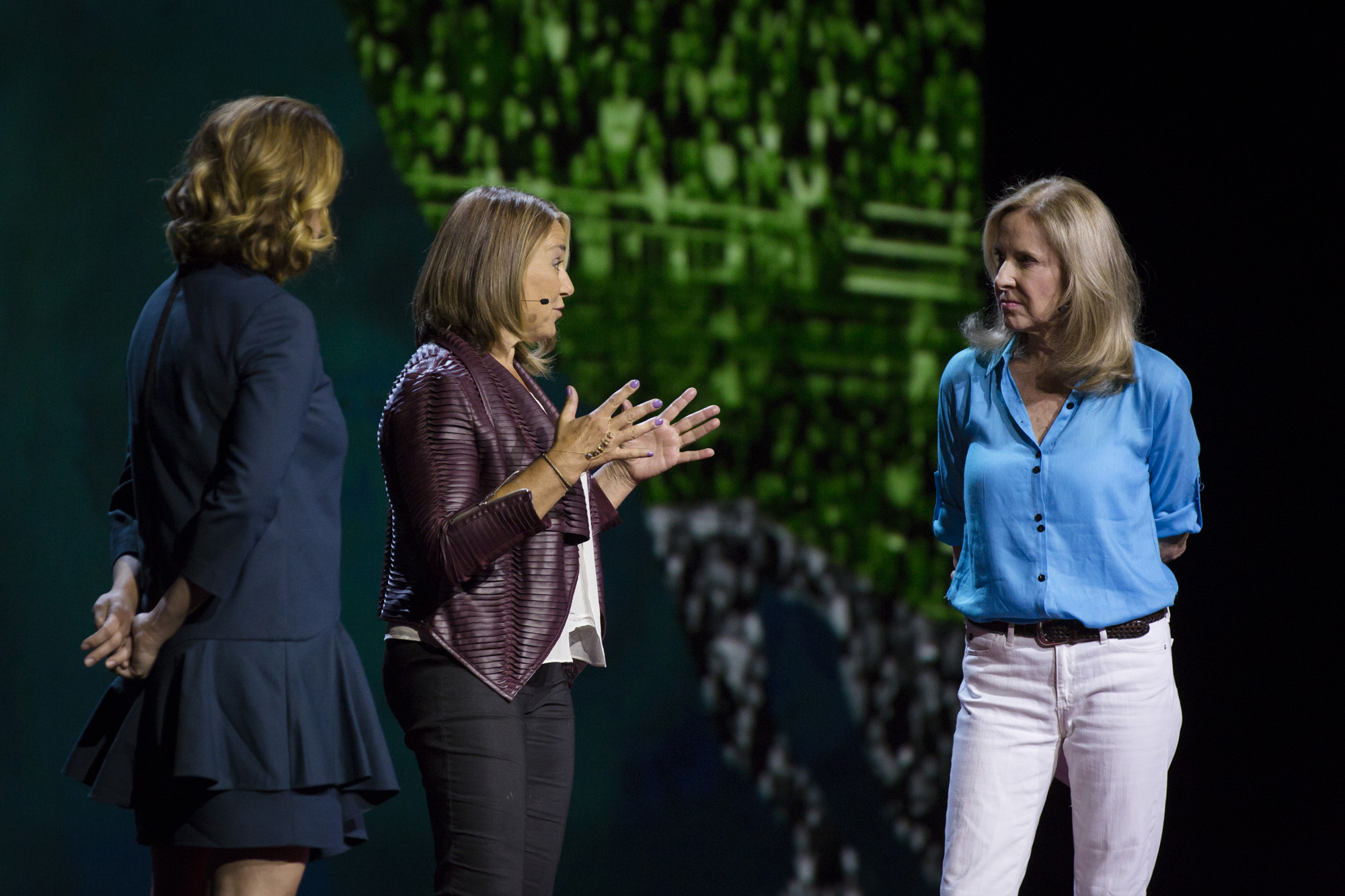 Anthropologist Helen Fisher, at right, studies whether romantic love is changing in the age of the Internet. Her conclusion: Not really. Relationship therapist Esther Perel, center, makes the case that tech does allow a new range of bad behavior, in an onstage Q&A hosted by Kelly Stoetzel (left). Photo by Marla Aufmuth/TED.

Our primordial drive to love. “We are built to love,” says anthropologist and romantic love expert Helen Fisher. The part of our brain that loves has evolved over thousands of years, and while technology may change how we court one another, it is not going to change who or how we love, ”the only real algorithm is your own human brain.” But there may be one change driven by technology: people are taking their time to love, extending the pre-commitment stage before marriage not because they’re scared of commitment but because they’re afraid of divorce. “We are right now in a marriage revolution,” suggests Fisher, driven not by technology but women piling into the job market, and that revolution is pushing us towards more egalitarian relationships between the sexes. At the end of a heart-warming affirmation of our drive to love, relationship therapist Esther Perel joined Fisher onstage to counter that while our need for love is universal, the way we love (and the way we keep our distance from love) is changing fundamentally.

Don’t buy the flashy CRISPR marketing. CRISPR — so easy to use and cheap to buy, you can edit your own genome in your kitchen sink!! Right? Not so fast, says Ellen Jorgensen. As a biologist and community science advocate, she knows that CRISPR’s hijack of nature’s surprisingly simple DNA repair system makes it easier for scientists to edit particular spots in the genome. But that doesn’t mean anyone can simply edit DNA beyond a cellular level, she warns. To impact an entire body, for example,  you’d have to use a virus, which requires more scientific expertise and a professional lab — at the very least. In other words, “It ain’t plug and play, not by a long shot.” The bigger picture is that the flashy do-it-yourself idea of CRISPR shouldn’t overshadow the remarkable strides scientists are making in their experiments with it. Paying close attention to the latter, she suggests, can ensure more positive outcomes for the environment and for ourselves. 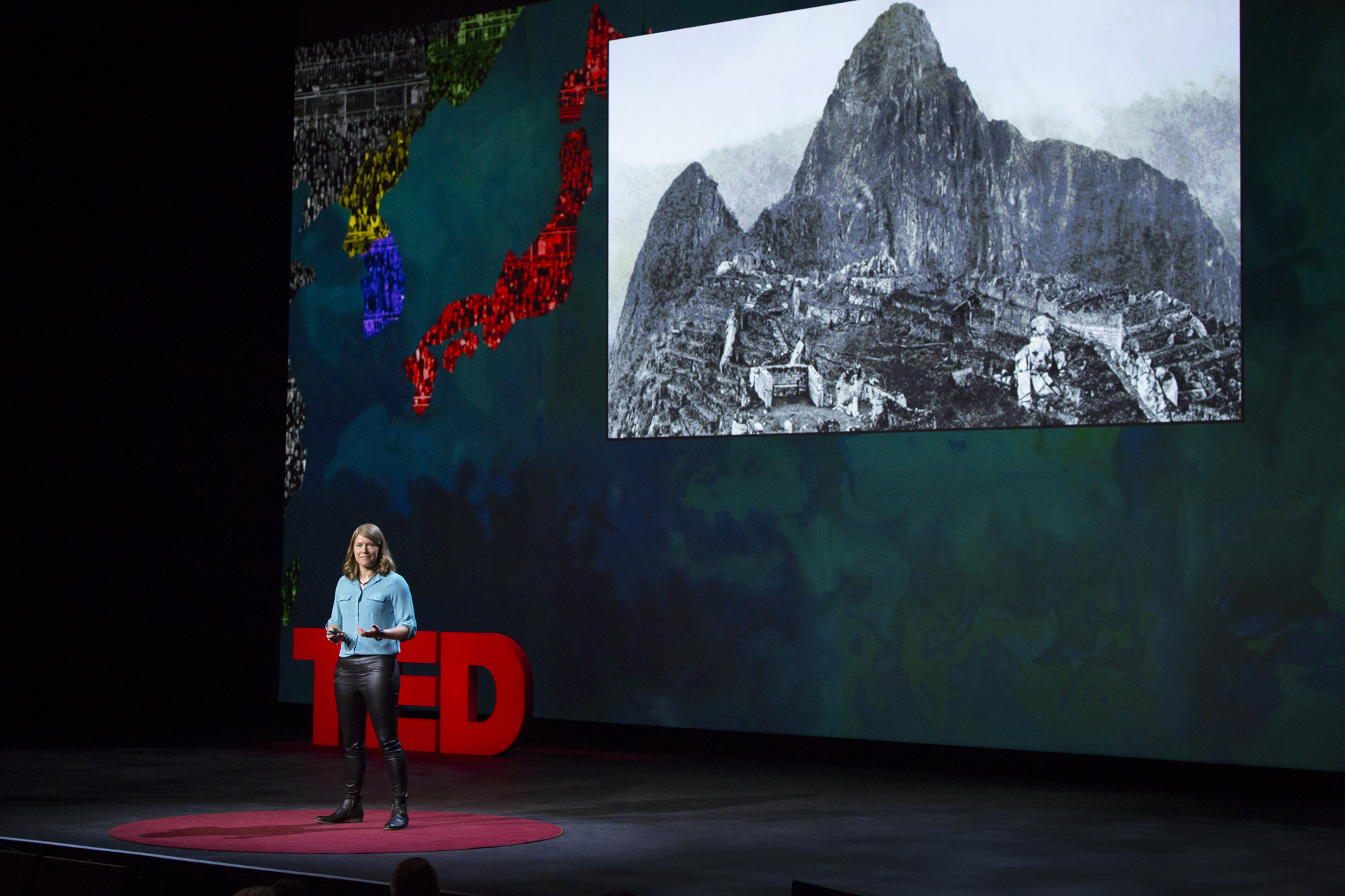 Crowd-sourcing the hunt for our history. If someone gave you a million dollars, how would you give it back to the world? Noted archaeologist Sarah Parcak announced tonight that she has used the money from winning the 2016 TED Prize to finance the building of GlobalXplorer, an internet-based citizen-scientist platform that will allow anyone with a computer to join Parcak in her groundbreaking (literally) work that involves carefully poring over satellite imagery to spot previously undiscovered ancient sites. Parcak also announced that the first place she would partner up with her online GlobalXplorer cohort to search would be Peru. Over the past few millennia, Peru was home to dozens of pre-Columbian cultures — the Incas are just the tip of the iceberg. In addition, the overgrown remoteness of much of the Peruvian landscape means much of it is still unexplored. However, the timing is crucial, as looting has become a serious problem at Peru’s ancient cultural sites. With the new initiative, Parcak hopes to help locate and preserve Peruvian cultural heritage for generations to come. Read more about what we hope to find.

Are we stealing nature from our kids? The short answer is — well, yes … but not in the way you’ve learned to expect. Environmental writer Emma Marris urges us to reconsider what we define as nature, when we talk about edens like Yellowstone and the Great Barrier Reef, to the wild, untended patches of grass and weeds growing in abandoned lots and around deserted buildings. What we define as “nature,” something generally understood as a place pure and devoid of human influence, is (by most definitions) not; even in some of the most isolated areas in the world, such as the Amazon, where people have lived for millennia. These new natures that spring up — such as that unkempt patch — must be not dismissed, and rather celebrated and cared for, in order to be protected by allowing our future generations into these truly wondrous places. How? Take kids to builds forts outside, to experience the natural world not just with their eyes, but their hands and entire beings. “We have to let children touch nature,” says Marris. “Because that which is untouched is unloved.”