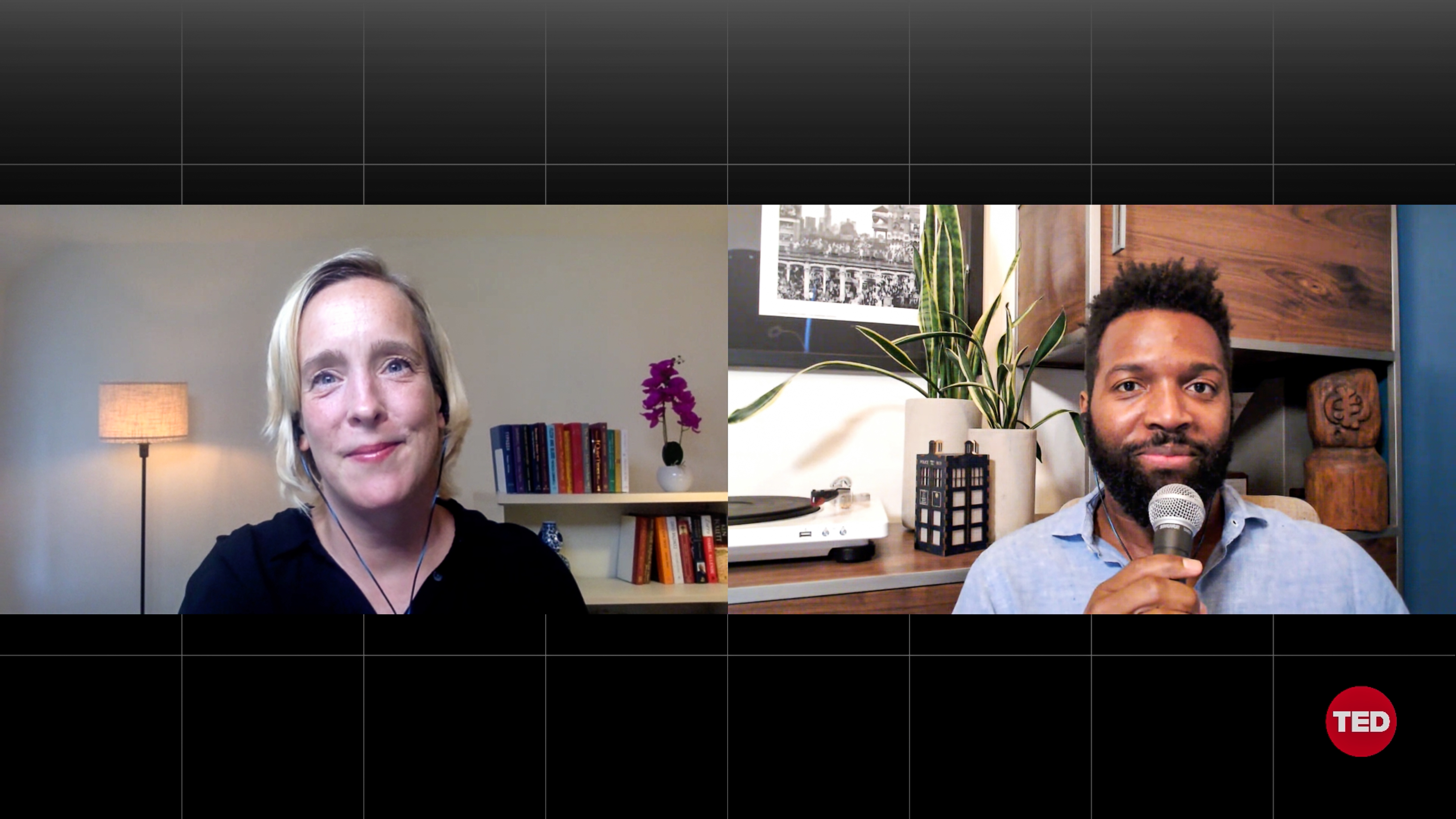 Session 3 of TED2020, hosted by TED’s head of curation Helen Walters and writer, activist and comedian Baratunde Thurston, was a night of something different — a night of camaraderie, cleverness and, as Baratunde put it, “a night of just some dope content.” Below, a recap of the night’s talks and performances.

In a heartfelt and candid moment to start the session, Tony- and Emmy-winner Cynthia Erivo performs “A Pledge to Rescue Our Youth,” an iconic 2006 poem by Maya Angelou. “You are the best we have. You are all we have. You are what we have become. We pledge you our whole hearts from this day forward,” Angelou writes.

“Drawing has taught me to create my own rules. It has taught me to open my eyes and see not only what is, but what can be. Where there are broken systems … we can create new ones that actually function and benefit all, instead of just a select few,” says Shantell Martin. She speaks at TED2020: Uncharted on June 4, 2020. (Photo courtesy of TED)

Big idea: Drawing is more than just a graphic art — it’s a medium of self-discovery that enables anyone to let their hands spin out freestyle lines independent of rules and preconceptions. If we let our minds follow our hands, we can reach mental spaces where new worlds are tangible and art is the property of all – regardless of ethnicity or class.

How? A half-Nigerian, half-English artist growing up in a council estate in southeast London, Martin has firsthand knowledge of the race and class barriers within England’s institutions. Drawing afforded her a way out, taking her first to Tokyo and then to New York, where her large-scale, freestyle black and white drawings (often created live in front of an audience) taught her the power of lines to build new worlds. By using our hands to draw lines that our hearts can follow, she says, we not only find solace, but also can imagine and build worlds where every voice is valued equally. “Drawing has taught me to create my own rules,” Martin says. “It has taught me to open my eyes and see not only what is, but what can be. Where there are broken systems … we can create new ones that actually function and benefit all, instead of just a select few.”

Big idea: Art is for everyone. Let’s make it that way.

Why? Creativity heals us — and everybody who harbors love for the arts deserves access to them, says Swizz Beatz. Interweaving a history of his path as a creative in the music industry, Beatz recounts his many successful pursuits in the art of giving back. In creating these spaces at the intersection of education, celebration, inclusion and support — such as The Dean Collection, No Commissions, The Dean’s Choice and Verzuz — he plans to outsmart lopsided industries that exploit creatives and give the power of art back to the people. “If we’re not protecting the arts, we’re not protecting our future, we’re not protecting this world,” he says.

“In this confusing world, we need to be the bridge between differences. You interrogate those differences, you hold them for as long as you can until something happens, something reveals itself,” says Jad Abumrad. He speaks at TED2020: Uncharted on June 4, 2020. (Photo courtesy of TED)

Big Idea: Storytellers and journalists are the bridge that spans conflict and difference to reveal a new meaning.

How: When journalist Jad Abumrad began storytelling in 2002, he crafted each story to culminate the same way: mind-blowing science discoveries, paired with ear-tickling auditory creations, resolved into “moments of wonder.” But after 10 years, he began to wonder himself: Is this the only way to tell a story? Seeking an answer, Abumrad turned to more complex, convoluted stories and used science to sniff out the facts. But these stories often ended without an answer or resolution, instead leading listeners to “moments of struggle,” where truth collided with truth. It wasn’t until Abumrad returned to his home of Tennessee where he met an unlikely teacher in the art of storytelling: Dolly Parton. In listening to the incredible insights she had into her own life, he realized that the best stories can’t be summarized neatly and instead should find revelation — or what he calls “the third.” A term rooted in psychotherapy, the third is the new entity created when two opposing forces meet and reconcile their differences. For Abumrad, Dolly had found resolution in her life, fostered it in her fanbase and showcased it in her music — and revealed to him his new purpose in telling stories. “In this confusing world, we need to be the bridge between differences,” Abumrad says. “You interrogate those differences, you hold them for as long as you can until something happens, something reveals itself.”

Backed by piano from Greg Phillinganes, singer, songwriter and producer Aloe Blacc provides balm for the soul with a gorgeous rendition of “Amazing Grace.”

Big idea: As a new generation of protesters takes to the streets to fight racial injustice, many have looked to the elders of the Civil Rights Movement — like John Lewis — to study how previous generations have struggled not just to change the world but also to maintain morale in the face of overwhelming opposition.

How? In order to truly effect change and move people into a better world, contemporary protestors must learn tactics that many have forgotten — especially nonviolent engagement and persistence. Fortunately, John Lewis sees an emerging generation of new leaders of conscience, and he urges them to have hope, to be loving and optimistic and, most of all, to keep going tirelessly even in the face of setbacks. As interviewer Bryan Stevenson puts it, “We cannot rest until justice comes.”