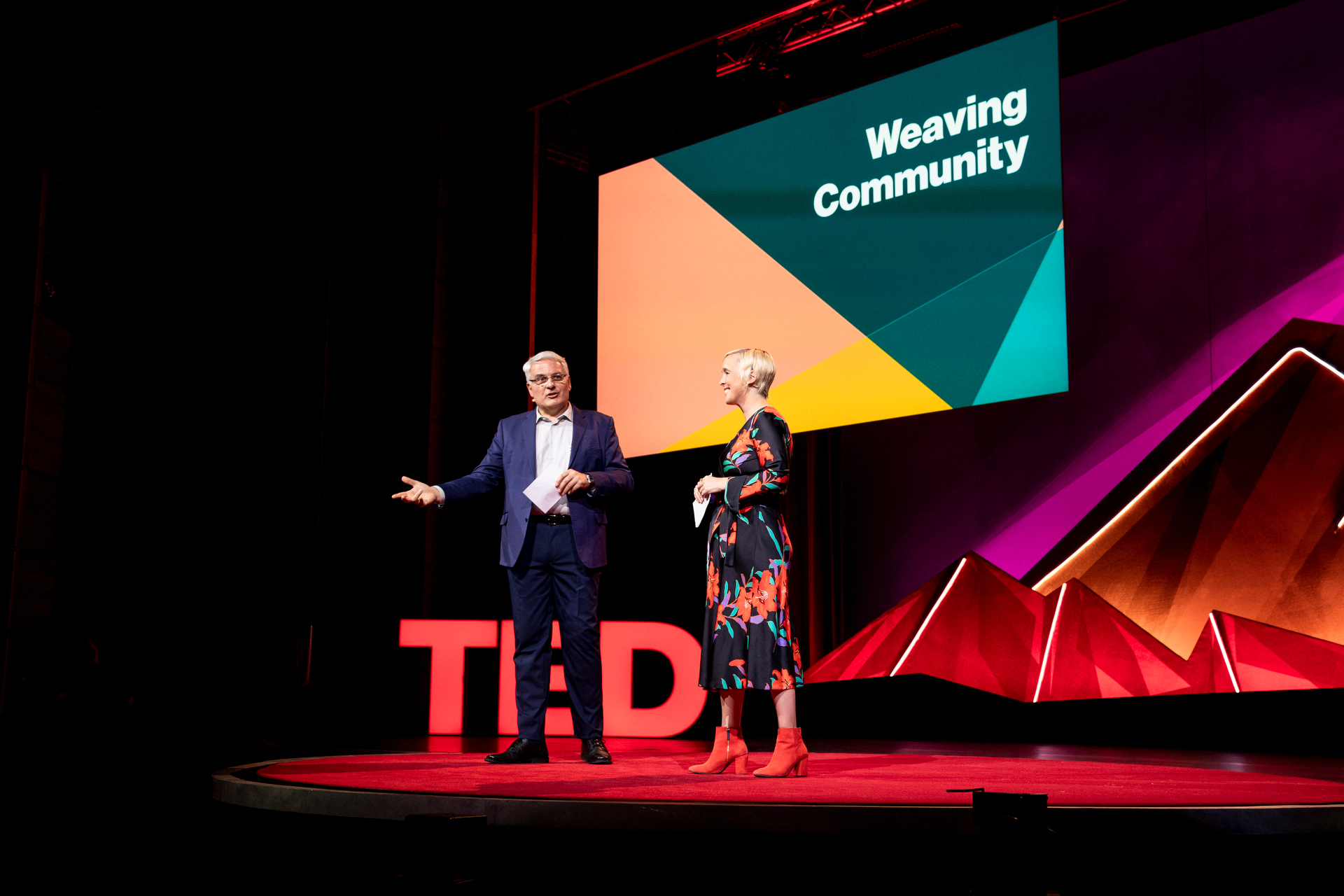 The stage is set for TEDSummit 2019: A Community Beyond Borders! During the opening session, speakers and performers explored themes of competition, political engagement and longing — and celebrated the TED communities (representing 84 countries) gathered in Edinburgh, Scotland to forge TED’s next chapter.

When and where: Sunday, July 21, 2019, 5pm BST, at the Edinburgh Convention Centre in Edinburgh, Scotland 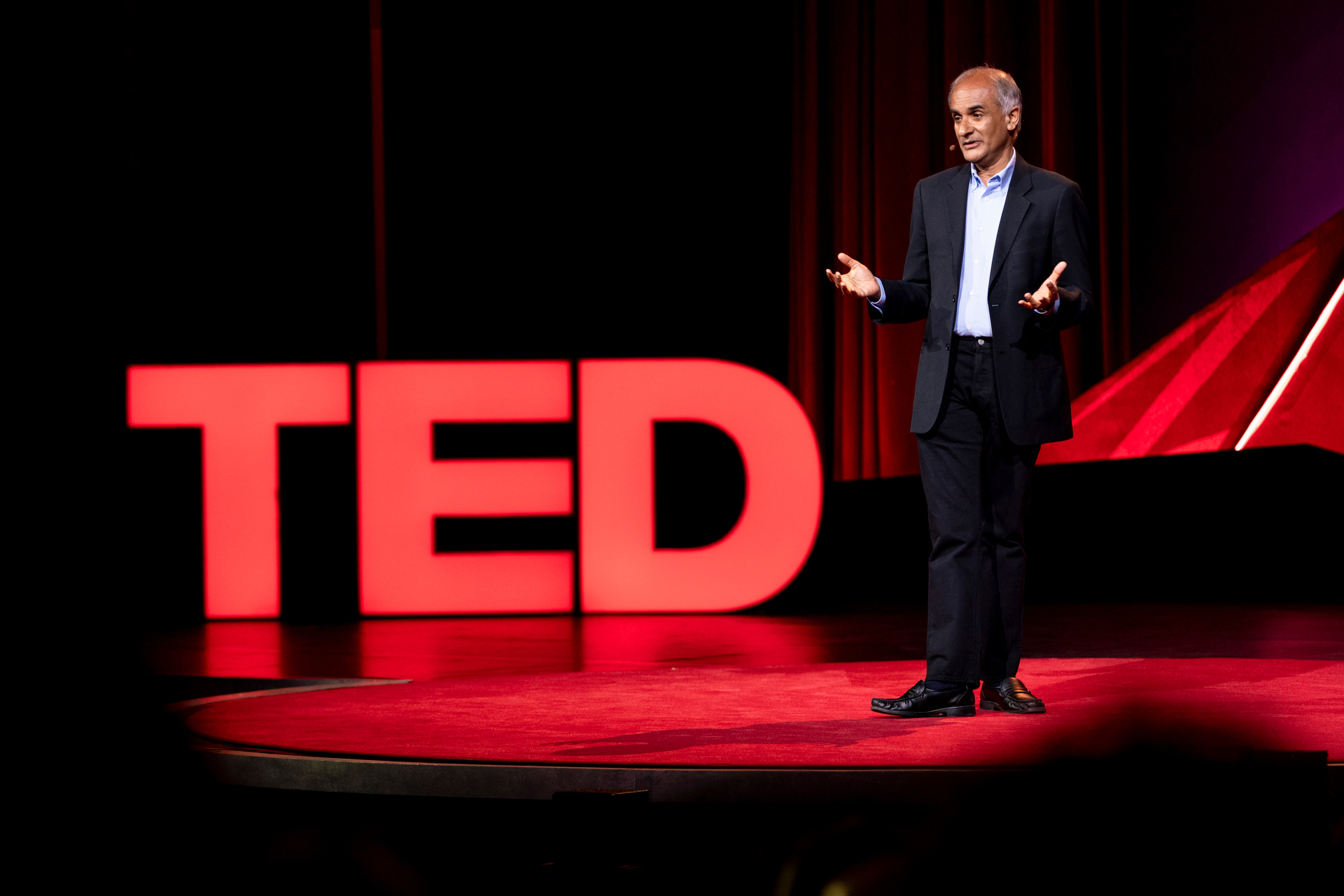 “Seeming happiness can stand in the way of true joy even more than misery does,” says writer Pico Iyer. (Photo: Ryan Lash / TED)

Big idea: The opposite of winning isn’t losing; it’s failing to see the larger picture.

Why? As a child in England, Iyer believed the point of competition was to win, to vanquish one’s opponent. Now, some 50 years later and a resident of Japan, he’s realized that competition can be “more like an act of love.” A few times a week, he plays ping-pong at his local health club. Games are played as doubles, and partners are changed every five minutes. As a result, nobody ends up winning — or losing — for long. Iyer has found liberation and wisdom in this approach. Just as in a choir, he says, “Your only job is to play your small part perfectly, to hit your notes with feeling and by so doing help to create a beautiful harmony that’s much greater than the sum of its parts.”

Quote of the talk: “Seeming happiness can stand in the way of true joy even more than misery does.”

Big idea: The spectrum of belief is as multifaceted as humanity itself. As social media segments us according to our interests, and as algorithms deliver us increasingly homogenous content that reinforces our beliefs, we become resistant to any ideas — or even facts — that contradict our worldview. The more we sequester ourselves, the more divided we become. How can we learn to bridge our differences?

How? Inspired by research showing that one-on-one conversations are a powerful tool for helping people learn to trust each other, Zeit Online built Germany Talks, a “Tinder for politics” that facilitates “political arguments” and face-to-face meetings between users in an attempt to bridge their points-of-view on issues ranging from immigration to same-sex marriage. With Germany Talks (and now My Country Talks and Europe Talks) Zeit has facilitated conversations between thousands of Europeans from 33 countries. 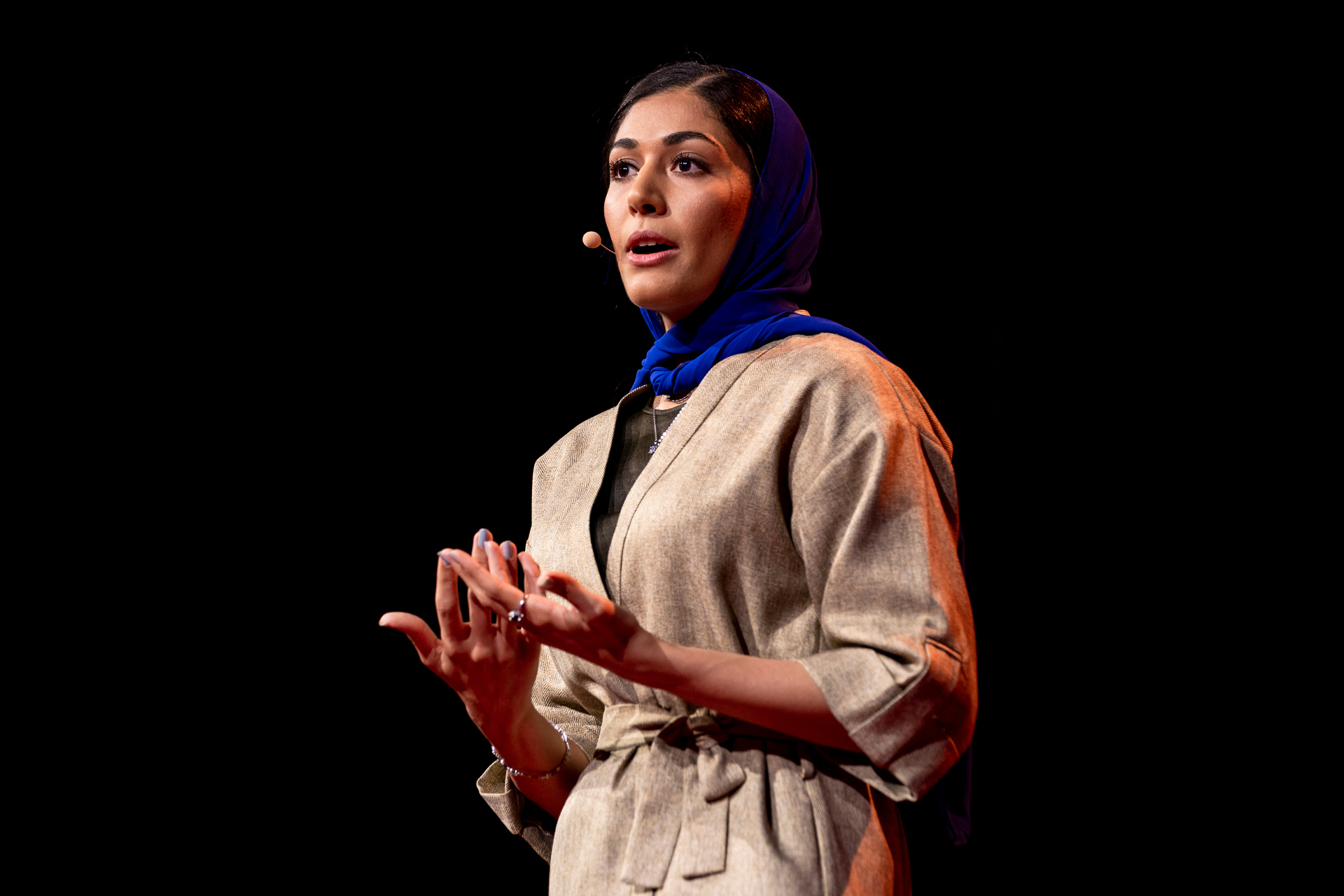 “The systems we have nowadays for political decision-making are not from the people for the people — they have been established by the few, for the few,” says activist Hajer Sharief. She speaks at TEDSummit: A Community Beyond Borders, July 21, 2019, in Edinburgh, Scotland. (Photo: Bret Hartman / TED)

Hajer Sharief, activist and cofounder of the Together We Build It Foundation

Big Idea: People of all genders, ages, races, beliefs and socioeconomic statuses should participate in politics.

Why? Hajer Sharief’s native Libya is recovering from 40 years of authoritarian rule and civil war. She sheds light on the way politics are involved in every aspect of life: “By not participating in it, you are literally allowing other people to decide what you can eat, wear, if you can have access to healthcare, free education, how much tax you pay, when can you retire, what is your pension,” she says. “Other people are also deciding whether your race is enough to consider you a criminal, or if your religion or nationality are enough to put you on a terrorist list.” When Sharief was growing up, her family held weekly meetings to discuss family issues, abiding by certain rules to ensured everyone was respectful and felt free to voice their thoughts. She recounts a meeting that went badly for her 10-year-old self, resulting in her boycotting them altogether for many years — until an issue came about which forced her to participate again. Rejoining the meetings was a political assertion, and it helped her realize an important lesson: you are never too young to use your voice — but you need to be present for it to work.

Quote of talk: “Politics is not only activism — it’s awareness, it’s keeping ourselves informed, it’s caring for facts. When it’s possible, it is casting a vote. Politics is the tool through which we structure ourselves as groups and societies.”

Why? Tech companies are going in two different directions when it comes to creating AI personas: they’re either building systems that are safe, flat, stripped of quirks and humor — or, worse, they’re building ones that are fully customizable, programmed to say just what you want to hear, just how you like to hear it. While this might sound nice at first, we’re losing part of what makes us human in the process: the friction and discomfort of relating with others, the hard work of building trusting relationships. Mariana Lin calls for tech companies to try harder to truly bring AI to life — in all its messy, complicated, uncomfortable glory. For starters, she says, companies can hire a diverse range of writers, creatives, artists and social thinkers to work on AI teams. If the people creating these personalities are as diverse as the people using it — from poets and philosophers to bankers and beekeepers — then the future of AI looks bright. 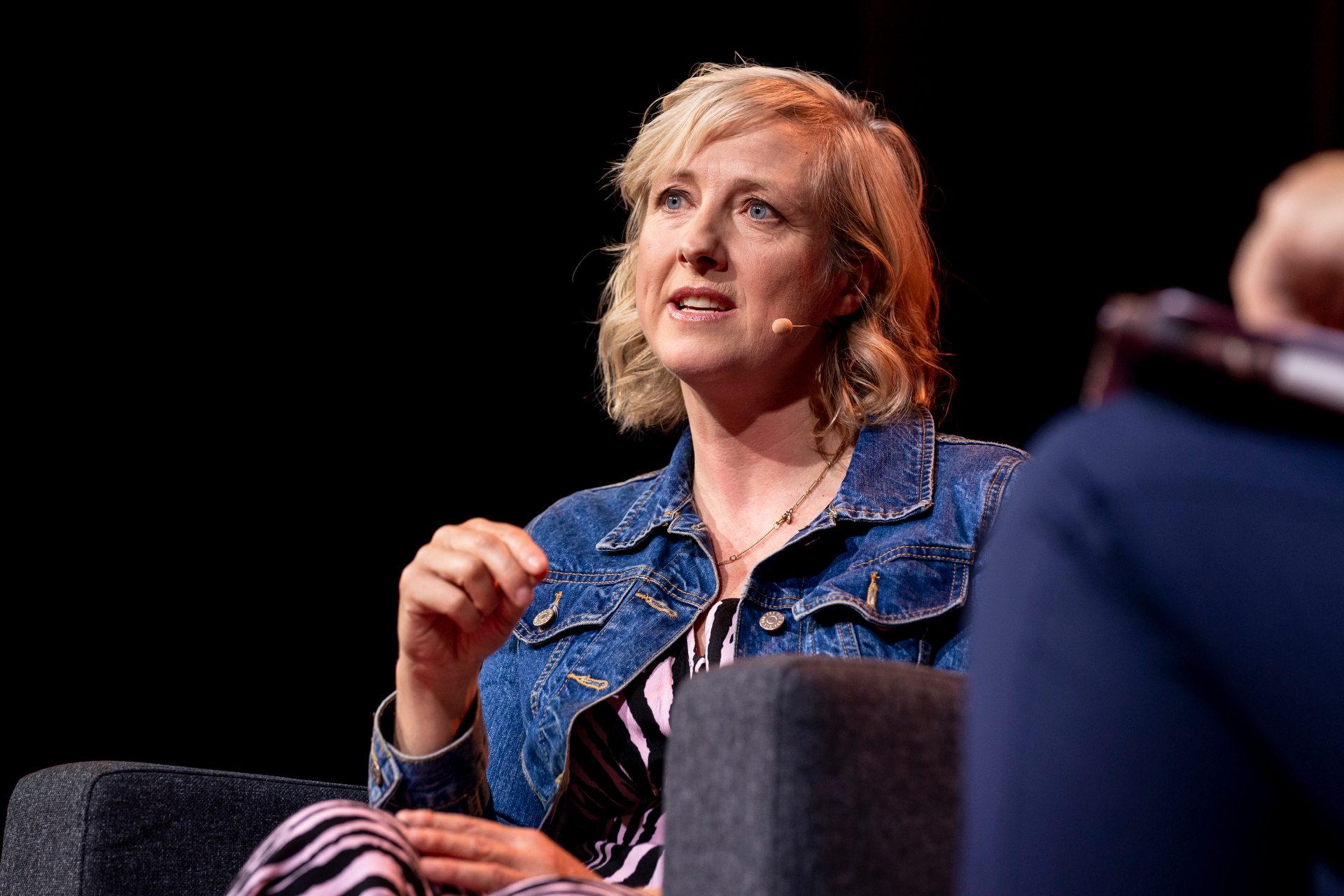 In 2018, Carole Cadwalladr exposed Cambridge Analytica’s attempt to influence the UK Brexit vote and the 2016 US presidential election via personal data on Facebook. She’s still working to sound the alarm. She speaks at TEDSummit: A Community Beyond Borders, July 21, 2019, in Edinburgh, Scotland. (Photo: Bret Hartman / TED)

Big idea: Companies that collect and hoard our information, like Facebook, have become unthinkably powerful global players — perhaps more powerful than governments. It’s time for the public hold them accountable.

How? Tech companies with offices in different countries must obey the laws of those nations. It’s up to leaders to make sure those laws are enforced — and it’s up to citizens to pressure lawmakers to further tighten protections. Despite legal and personal threats from her adversaries, Carole Cadwalladr continues to explore the ways in which corporations and politicians manipulate data to consolidate their power.

Quote to remember: “In Britain, Brexit is this thing which is reported on as this British phenomenon, that’s all about what’s happening in Westminster. The fact that actually we are part of something which is happening globally — this rise of populism and authoritarianism — that’s just completely overlooked. These transatlantic links between what is going on in Trump’s America are very, very closely linked to what is going on in Britain.” 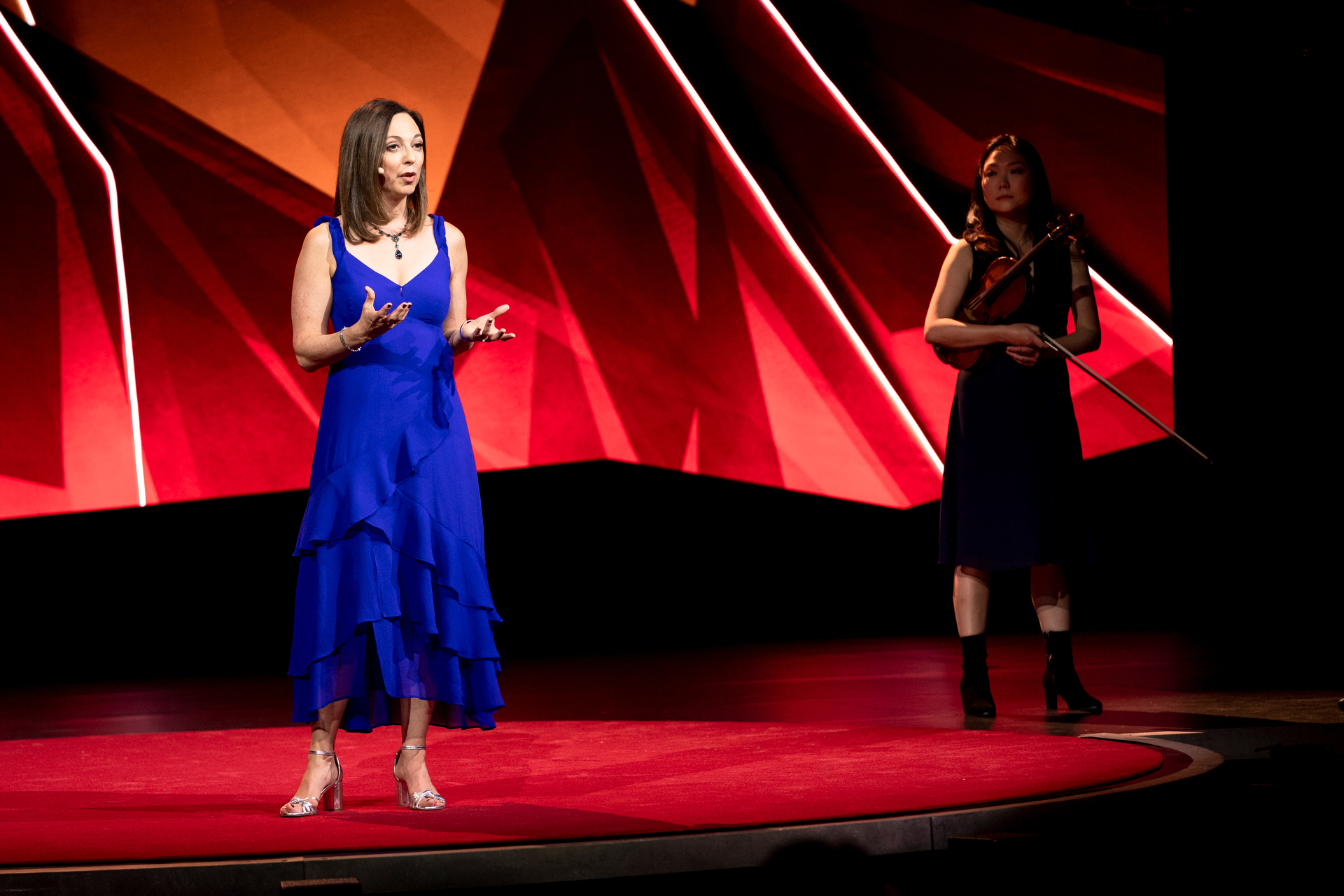 Susan Cain meditates on how the feeling of longing can guide us to a deeper understanding of ourselves, accompanied by Min Kym on violin, at TEDSummit: A Community Beyond Borders. July 21, 2019, Edinburgh, Scotland. (Photo: Ryan Lash / TED)

Big idea: Life is steeped in sublime magic that you can tap into, opening a whole world filled with passion and delight.

How? By forgoing constant positivity for a state of mind more exquisite and fleeting — a place where light (joy) and darkness (sorrow) meet, known to us all as longing. Susan Cain weaves her journey in search for the sublime with the splendid sounds of Min Kym on violin, sharing how the feeling of yearning connects us to each other and helps us to better understand what moves us deep down.

Quote of the talk: “Follow your longing where it’s telling you to go, and may it carry you straight to the beating heart of the perfect and beautiful world.”