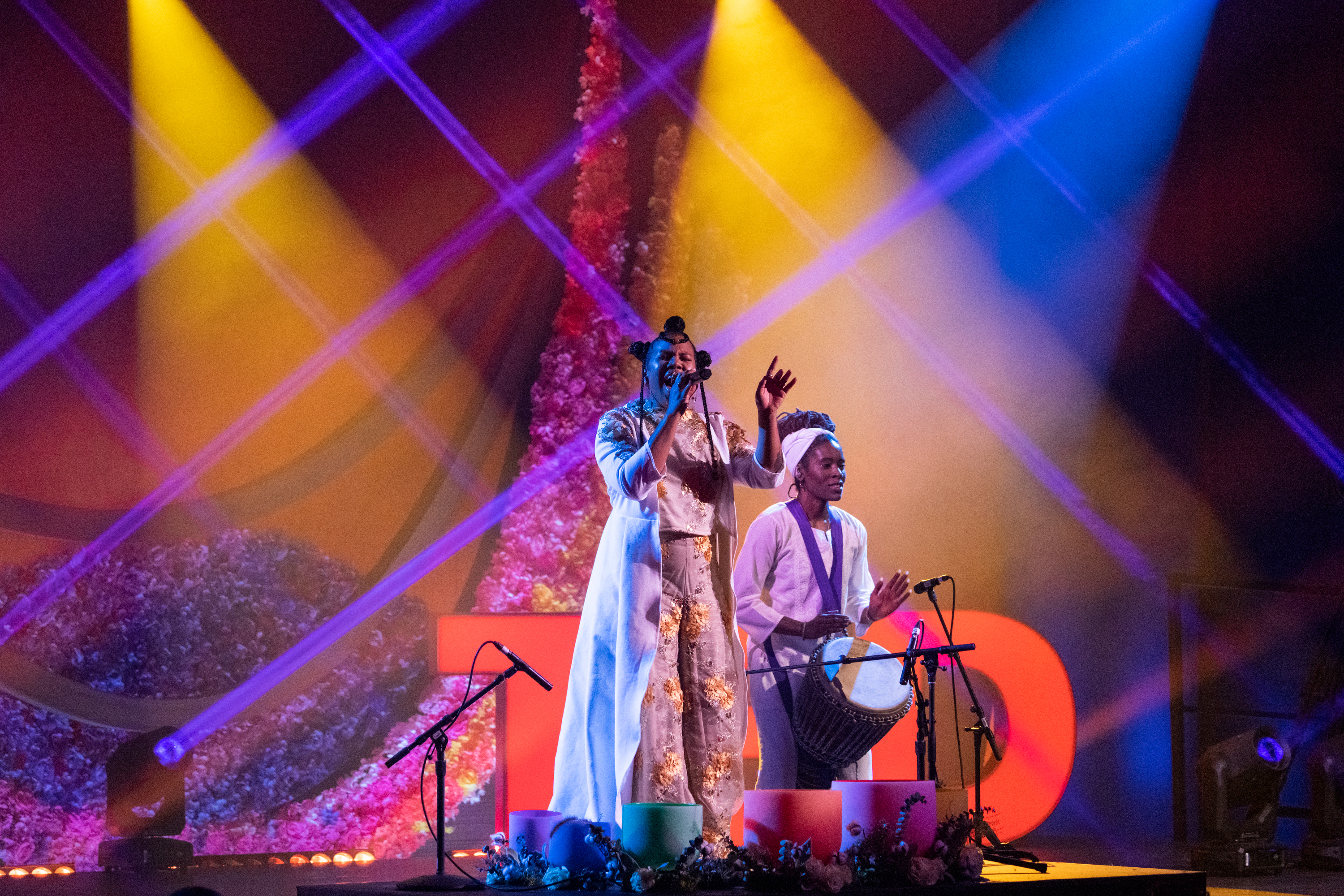 In Session 5, we turn to collective moments of joy. Seven speakers and a performer dove headfirst into creativity, helping us see the silver lining, embrace artistry and boldly chart out the world we want to live in.

Music: Singer, multi-instrumentalist, producer and healer Geminelle performs a hypnotic set, featuring “Everything I Need,” “Find Your Tribe” and “I Am Free” 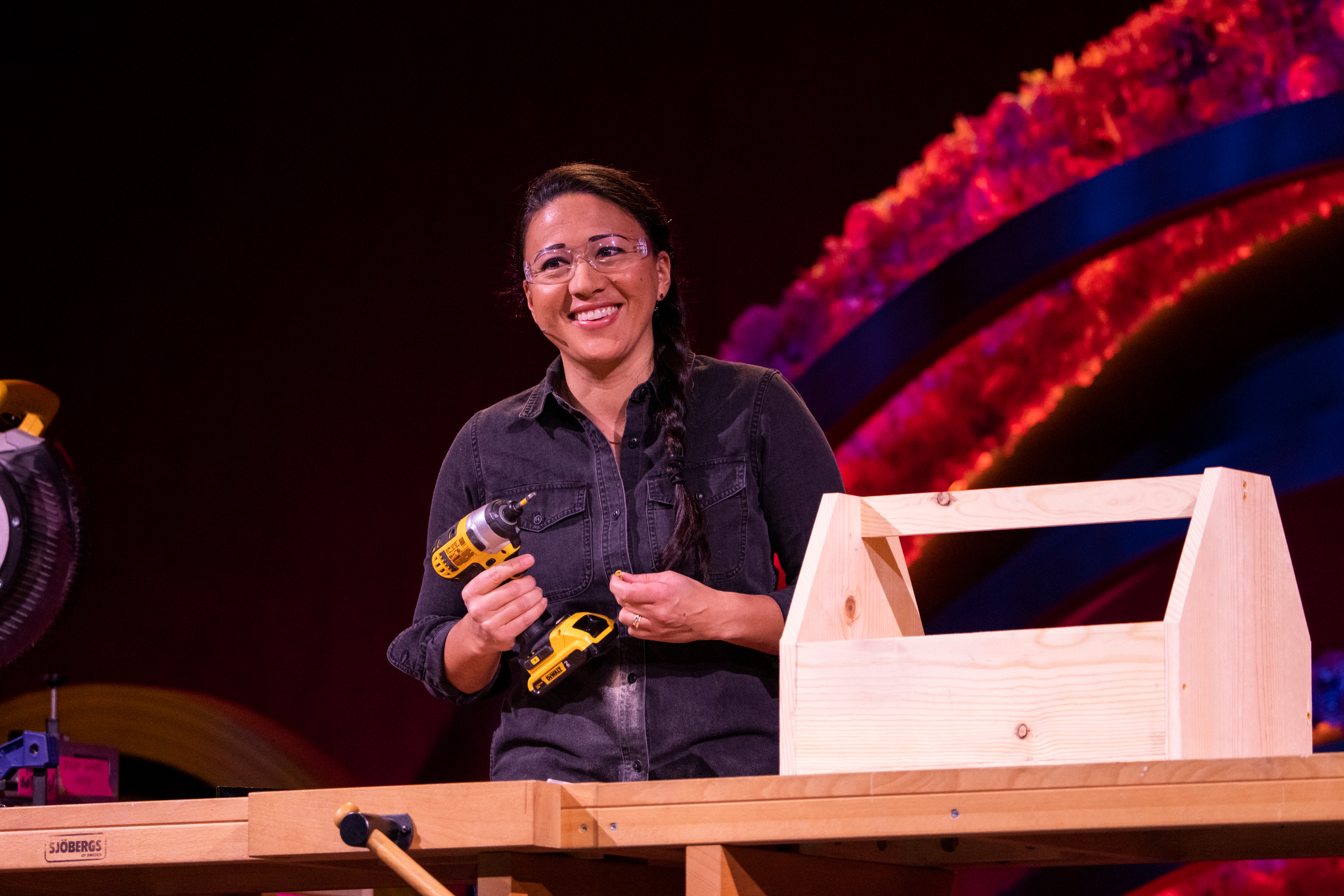 Big idea: Our image of construction workers is overwhelmingly male — and for good reason, as only four percent of workers on construction sites are women. Through her nonprofit Girls Garage, Emily Pilloton-Lam is teaching girls and non-binary kids (with a focus on people of color) the skills needed to take up this well-paid and satisfying vocation. What will it take to actualize a future built (literally) by women as well as men?

How? According to Pilloton-Lam, there are more than 300,000 unfilled jobs in construction, and the industry is struggling to fill them. But unlike other fields, the gender wage gap in construction is a mere 99 cents to the dollar. Considering these statistics, it’s a no-brainer that women represent a huge, untapped pool of labor resources. On top of the stereotype that women aren’t strong enough for the job (which, considering most of the work is done by power tools, is absurd), women and non-binary people face numerous other artificial barriers, including a work culture that is unwelcoming at best and hostile at worst. To fight this, Girls Garage provides mentorship and education to train and inspire girls and gender-expansive youth to take their places in this industry. And, in a first-of-its-kind TED demo, Pilloton-Lam uses power tools to build a wood toolbox onstage … while giving her talk.

Big idea: Fanfiction deserves a closer look for its creativity, criticism and community.

Why? When she was 10 years old, Cecilia Aragon fell in with the Lord of the Rings trilogy but was disappointed with the lack of female characters. So she rewrote the story to her liking with reimagined protagonists and new scenes that reflected what she wanted to see. Today, what Aragon wrote is known as fanfiction (or transformative fiction): a story based on characters or settings from another’s work. As an adult, she decided to do a deep data dive into the vast world of online fanfiction to study the impact creating these stories has on the writer and their craft. And what she and her research partner found surpassed her wildest imagination — over 60 billion words in more than 44 languages, written primarily by millions of young people over the past 20 years. An outpouring of creativity culminating in a kind, supportive community that’s generous with its feedback and constructive criticism in a way that encourages and emboldens. Aragon sees this organic network of writerly love as a blueprint for more formal learning tools to help develop students in schools and as an opportunity to foster connections across the country. 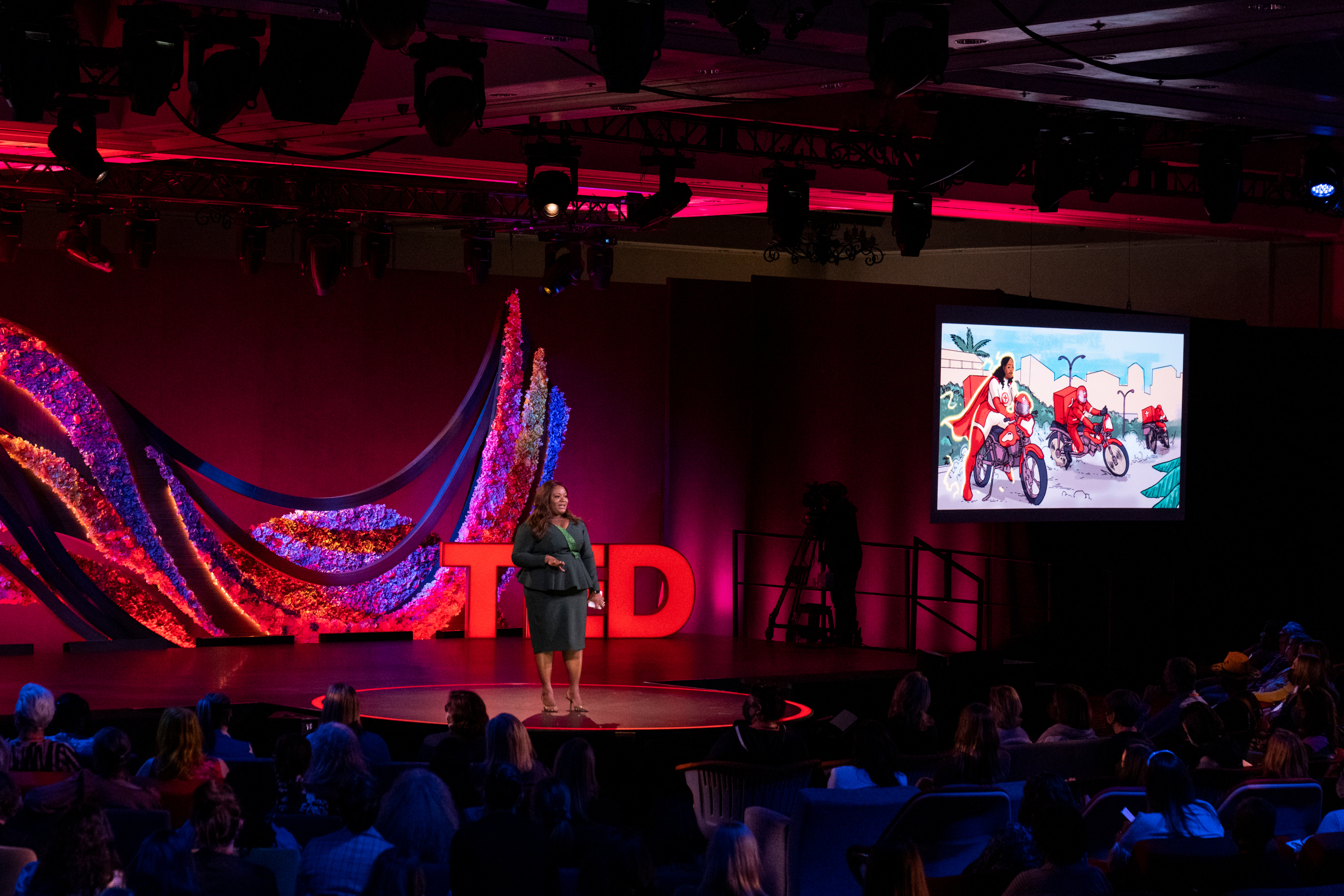 Entrepreneur Temie Giwa-Tubosun shares the hero’s journey she went on to start her company. She speaks at TEDWomen 2021: What Now? on December 2, 2021 in Palm Springs, California. (Photo: Gilberto Tadday / TED)

Big idea: Black women entrepreneurs are founding game-changing start-ups in Africa and across the globe. It’s time for investors to give them the funding and support they need to grow and scale.

How? Temie Giwa-Tubosun is the founder of LifeBank, a start-up that connects remote cities, towns and villages with life-saving medical supplies. Since 2016, they’ve saved more than 40,000 lives — yet it proved nearly impossible for Giwa-Tubosun to raise funds when she first set out to start her company. And she’s not alone: in 2020, less than six percent of venture capital funding for African startups went to companies with women cofounders, despite their proven track records. Giwa-Tubosun issues a challenge to investors to think harder when it comes to deciding which founders to back — and to close the funding gap for Black women-led startups and innovations.

Question: Who gets to decide what is and isn’t money?

Answer: Fariel Salahuddin’s favorite way to be introduced at social gatherings is as “the foremost goatherd in Pakistan,” a vocation she happened upon through a combination of fate and curiosity. She works with smallholder farmers in developing countries, enabling them to use their livestock as currency. After visiting a small town in Pakistan where people live without access to basic necessities like water, she took a chance and asked a village elder if they’d be willing to pay for a solar water pump (which are very expensive in Pakistan) with goats (which are abundant there). This idea blossomed into a now-booming trade, tokenizing goats as a form of currency and helping get desperately needed water to remote areas — and leading Salahuddin to question how money really works. Tracing the history of money from Sumerians trading in barley to paper money backed by central banks to the blockchain, she shows how value and the way it’s exchanged has changed over time — and that there’s great opportunity in leveraging the economic assets of varied communities. 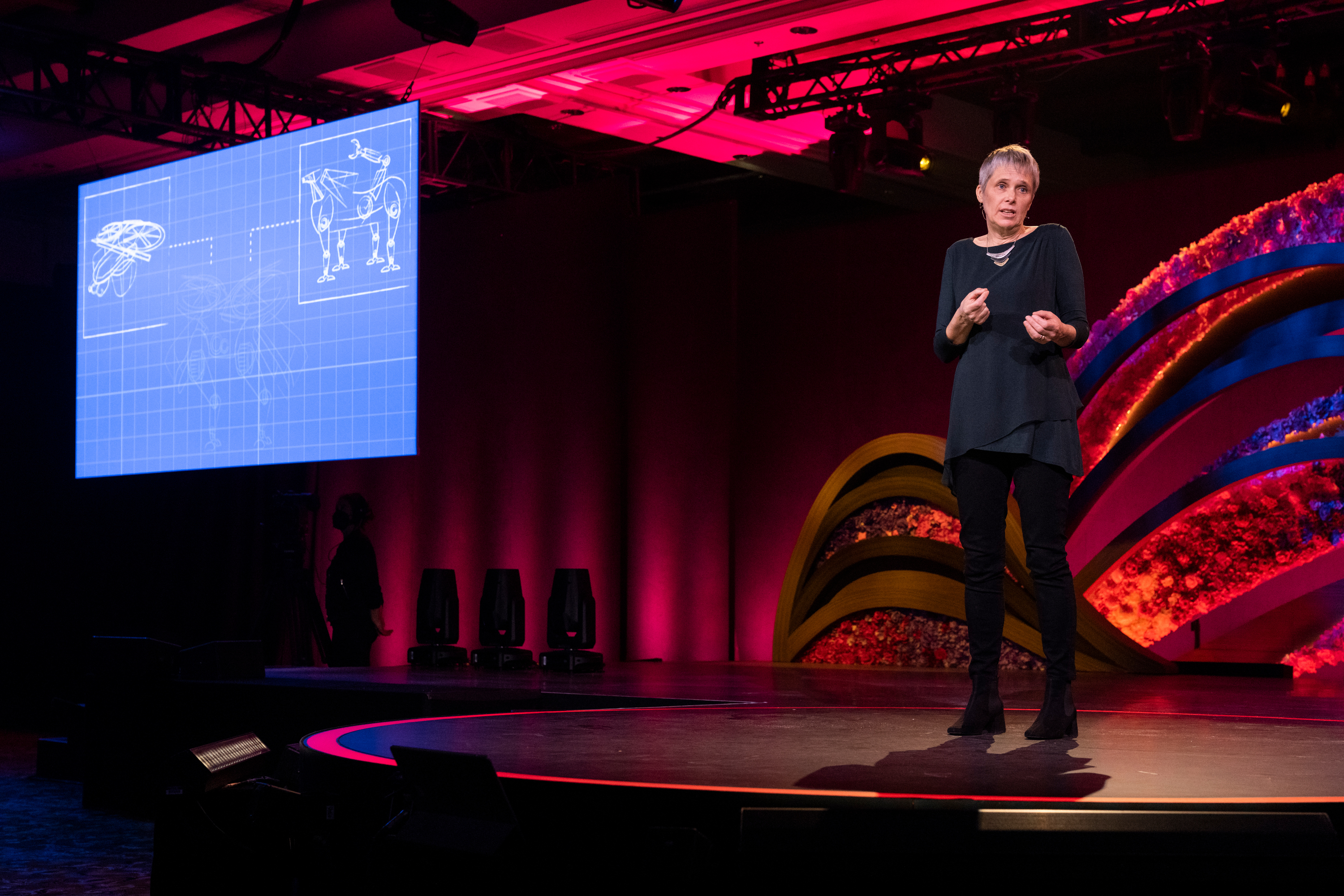 In a mind-blowing talk, computer scientist Emma Hart explains how robots could evolve like biological organisms, autonomously optimizing themselves over time. She speaks at TEDWomen 2021: What Now? on December 2, 2021 in Palm Springs, California. (Photo: Marla Aufmuth / TED)

Big idea: What if we could create robots that evolve like biological organisms, autonomously optimizing themselves over time?

How? Think of it as a robot building itself, says Emma Hart. She and her collaborators are working on a radical new technology that would enable robots to be created, “reproduce” and evolve in real-time, successively “breeding” more and more optimized versions of themselves. This would allow robots to design themselves on the fly when sent to far-off, unknown or dangerous places (think: an asteroid, the bottom of the ocean or a nuclear reactor meltdown), potentially saving years of wasted effort and creating machines uniquely adapted to the environment and task at hand. So how exactly does a robot self-evolve? Hart and her team are turning to nature for help, replicating the three essential ingredients of biological evolution: a population in which individuals exhibit physical variations; a method of reproduction in which offspring inherit traits from their parents (and sometimes acquire new ones via mutation); and natural selection. Using a mixture of software and hardware, they’re able to guide the evolution of robots. For instance, they develop digital versions of DNA that combine and mutate; use 3-D printers to create skeletons; and oversee a virtual version of the “survival of the fittest” whereby robot designs are scored and prioritized based on their ability to conduct tasks. By repeating this cycle over and over, scientists could produce successive generations of new robots that — just like in nature — get better than the last. Call it “digital evolution” — a groundbreaking new process that could unlock new designs freed from the constraints of our current understanding of engineering, science and design.

Big idea: With the advent of virtual and augmented reality, avatars are becoming more complex, demanding out-of-this-world couture that’s unchained from physical reality. Gala Marija Vrbanic is at the forefront of this brave new world.

How? Gamers have been dressing up their video game characters for years. The next logical step, Marija Vrbanic tells us, is the advent of virtual clothing for social media and VR spaces — and in fact, this latest step has already become a reality, with virtual Gucci bags now selling for more than their physical counterparts. As founder and CEO of the virtual fashion house Tribute Brand and YCY, Marija Vrbanic has put Croatia on the fashion map with her weird and wonderful AR and VR garments. 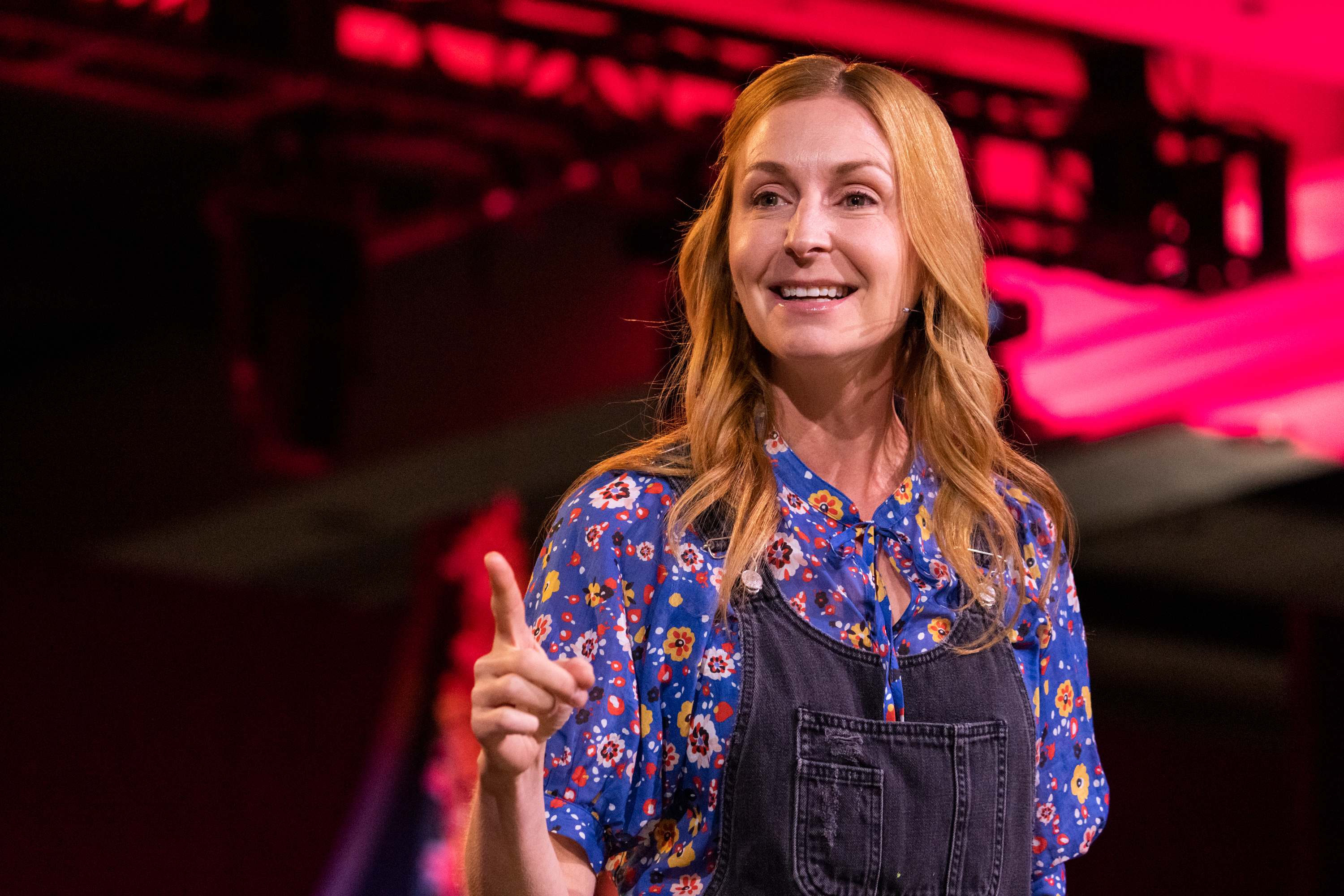 Christina Tosi shares the sugary jolt of her first food memory — and the vision behind Milk Bar. She speaks at TEDWomen 2021: What Now? on December 2, 2021 in Palm Springs, California. (Photo: Gilberto Tadday / TED)

Big idea: Break the rules to create some delicious magic.

How? Most people think of magic as a trick, says Christina Tosi — a seemingly impossible act put on for the sake of entertainment. But Tosi wants to challenge that belief: real magic, she says, is not an illusion but the feeling of experiencing life shift from ordinary to extraordinary. It can be found in the spark of a moment, the simple act of believing, belonging, understanding or being understood. And she has found that magic is often created by breaking some sort of rule: pushing boundaries, challenging norms, asking why or why not. Seeing people experience magic by eating baked goods, Tosi was inspired to recreate that feeling with her quirky, unexpected confectionery combinations. Simple, approachable, accessible and nostalgia-tinged flavors — rooted in known, safe and loved delights — form the basis of her desserts, almost as if “fancy was the enemy of delicious.” With rebelling against convention baked into both her business and creative ethos, Tosi has developed a brand recognized for its ingenuity, invention and generosity of spirit. “That’s what you do when you benefit from what came before you and plan on passing it along long after you — when you know you’re here to give and not take, and leave this place better than you found it,” she says. And it all starts with a decision to act: to see the magic, capture it before it can disappear and share it … perhaps one bite at a time.