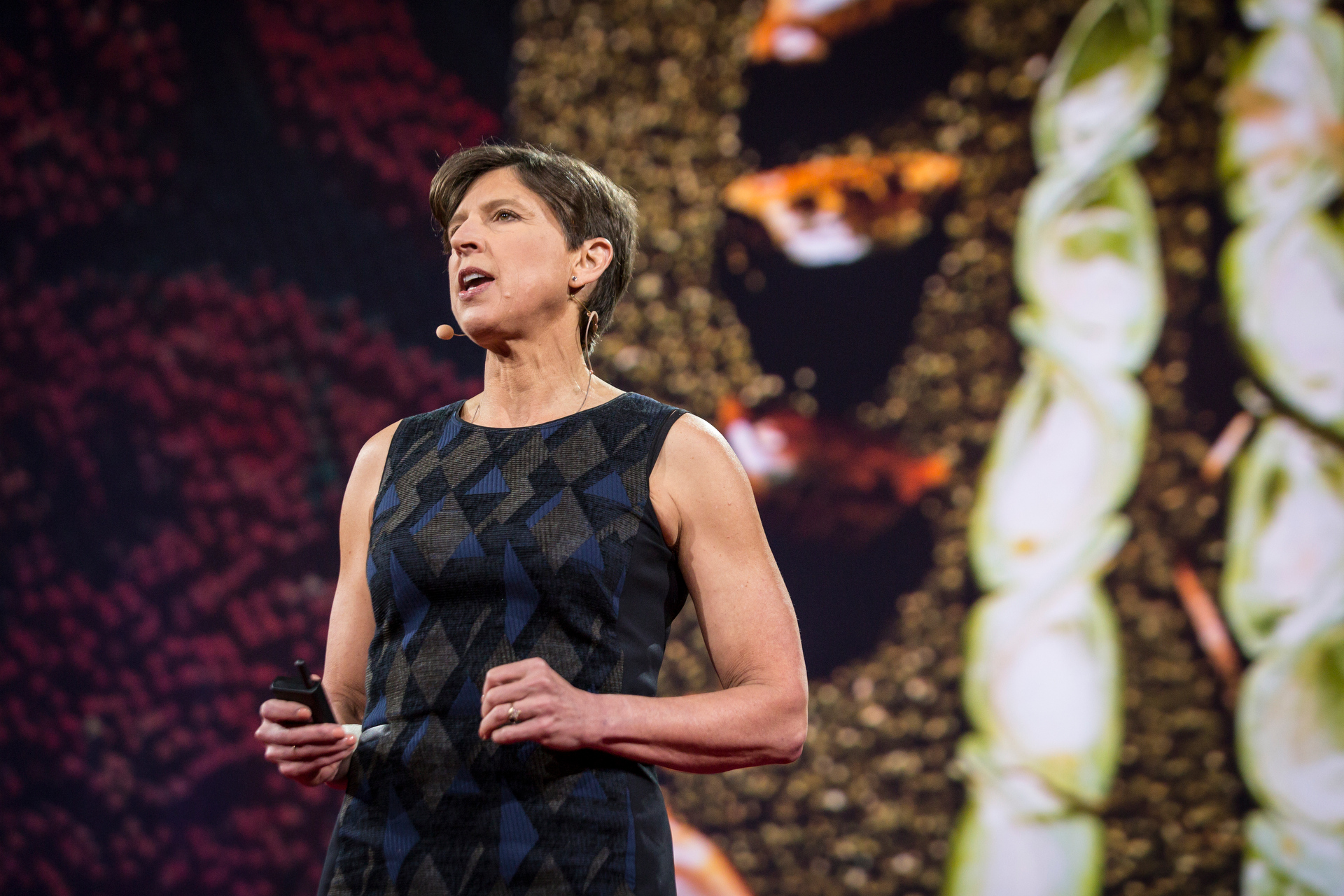 Pamela Ronald is a plant scientist, married to an organic farmer. Her talk shows how their goals are the same: to grow good food. Photo: Bret Hartman/TED

Pamela Ronald is here to talk about her work as a plant geneticist, about her work “studying genes that make plants resistant to disease and tolerant of stress.”

But first, she’d like to introduce us to her husband. “This is Raoul. He’s an organic farmer,” she says. “People say, ‘Really? An organic farmer and a plant geneticist? Can you agree on anything?’ Well, we can. Because we both have the same goal: we want to help nourish the growing population without further destroying the environment.”

Genetic improvement of plants isn’t new, she says. Ancient corn had a case so hard that it couldn’t be chewed; the ancient banana was full of large seeds; ancient brussels sprouts weren’t actually individual objects. “To create these crops, breeders used many kinds of genetic techniques,” says Ronald. “Today breeders have even more the options choose from. Some of them are extraordinarily precise.”

She moves on to her own work on rice, “the staple food for more than half the world’s population.” Every year, 40% of the rice harvest is lost to pests and disease. “Farmers rely on varieties that carry genes for resistance.”

When Ronald started her work, no one knew exactly what those genes were. Her lab helped isolated a gene called “XA21” that makes rice resistant to bacterial infection, and engineered it into plants. After the publication of this work, Ronald was approached by a colleague, Dave Mackill, who was working on how to make rice more resilient in the face of flooding.

“Although rice grows well in standing water, most varieties will die if they’re submerged for more than three days. Flooding increasingly problematic as climate changes,” says Ronald. “[Mackill] said, ’70 million rice farmers are having trouble growing rice because their fields are flooded. They’re living on less than $2 a day.”

The two launched a decade-long quest, with graduate student Kenong Xu, to identify and isolate a gene that might help. Eventually, they succeeded with the discovery of the gene Sub1. In a greenhouse test, rice engineered with Sub1 survived 18 days of flooding, while the standard rice died. Ronald shows a time lapse of what happened when breeders at the International Rice Research Institute developed new varieties carrying this gene using precision breeding. Both the IRRI variety and the conventional variety grow well at first. But after 17 days of submergence, the conventional rice has withered while the Sub1 rice thrives. “And they produce three-fold more grain than the conventional variety,” says Ronald.

“A lot of people don’t mind genetic modification when it involves moving rice genes around,” says Ronald, “but when it comes to taking genes from viruses and bacteria and putting them into plants, people say ‘Yuck! Why would scientists do that?'”

Ronald’s answer: “Because sometimes it is the safest, cheapest and most effective technology to advance sustainable agriculture and enhance food security.”

She walks us through a few examples. In the 1990s, the papaya crop on the island of Oahu in Hawaii was threatened by a ringspot virus. “Many people thought the Hawaiian papaya was doomed,” says Ronald.

A local Hawaiian plant pathologist named Dennis Gonsalves had an idea. He spliced a snippet of the DNA of the virus into the papaya genome — and it worked. It made the papaya resistant to the virus. “His pioneering work is credited with rescuing the papaya industry,” says Ronald. “Twenty years later, no other method is as effective.” 80% of all Hawaiian papaya is now engineered in this way.

Next, she brings us to Bangladesh, where a caterpillar pest is ravaging the eggplant crop. “To control this pest, farmers spray insecticides 2 to 3 times a week, sometimes even twice a day,” says Ronald. Of course, this threatens their own health. “It’s estimated that 300,000 people die every year because of exposure and misuse of insecticides.”

Organic farmers like Ronald’s husband use a spray called Bt, which is highly specific to caterpillars while being safe for humans, birds and other animals — it’s less toxic than table salt, says Ronald. But this approach does not work for farmers in Bangladesh because it is expensive and hard to find. “In the genetic approach, scientists cut the gene for Bt out of the bacteria and insert it directly into the eggplant genome,” says Ronald. This was used last season and it helped farmers take insecticide use down to zero.

And one final example has to do with malnutrition. “In less developed countries, Vitamin A deficiency causes nearly 500,000 children to go blind every year. More than half die,” says Ronald.

To try to help, scientists created genetically engineered “golden rice,” that has B-carotene, a precursor of Vitamin A. “Scientists predict that just one cup of golden rice per day will reduce blindness and the deaths of thousands of young children each year,” says Ronald. “But Golden Rice has been virulently opposed by activists who are against genetic modification.”

Genetic engineering has been used commercially for 40 years in wines, cheeses and much more. And in that time, there hasn’t been a case of harm to human health or the environment, she points out. “Look, I’m not asking you to believe me. Science is not a belief system. My opinion does not matter.  Let’s look at the evidence. After 20 years of careful study and rigorous peer review by thousands of independent scientists, every major scientific organization in the world has concluded that the process of genetic engineering is as safe or safer as older methods of genetic modification.”

She ends: “What scares me most about the loud arguments and misinformation about plant genetics is that the poorest people, the people who most need the technology, may be denied access because of the fears and prejudices of those who have enough to eat.”