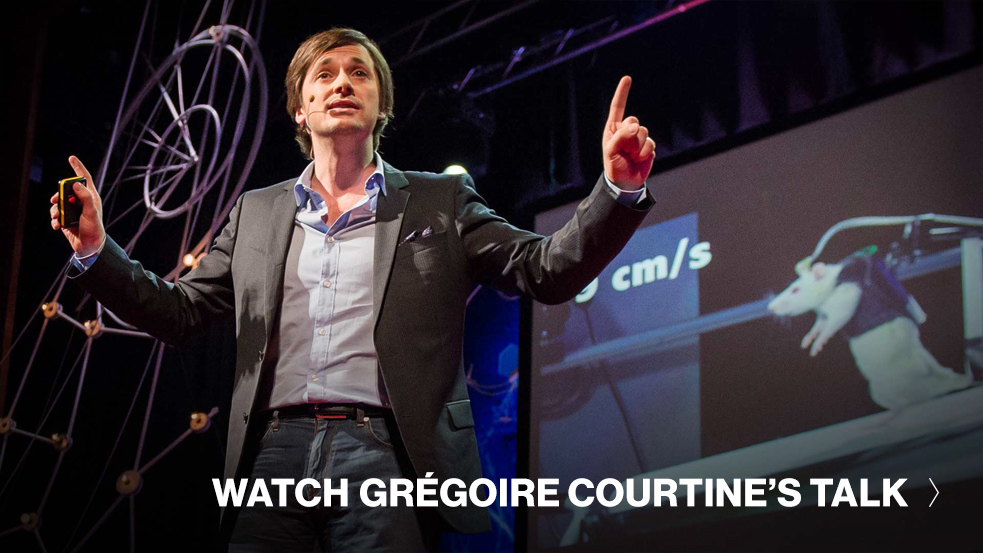 Advances in treating spinal cord damage. In Nature, Grégoire Courtine and a team of scientists announced that they had successfully used a wireless brain-spine interface to help monkeys with spinal cord damage paralyzing one leg regain the ability to walk. Compared to other similar systems, the wireless component is unique, allowing the monkeys to move around freely without being tethered to electronics. Speaking with The New York Times, Courtine emphasized that the goal of the system is not to fix paralysis, but rather to have better rehabilitation for patients. (Watch Grégoire’s TED Talk)

A new instrument to shed light on distant planets. A team of scientists and engineers, including TEDster Jeremy Kasdin, have used a new instrument to isolate and analyze the light emitted by planets orbiting nearby stars. The instrument, CHARIS, was designed and built by Kasdin’s team. By analyzing the light emitted by the planets, researchers are able to determine more details about their age, size and atmospheric composition. This operation was a test run, and is part of a larger scientific effort to find and analyze exoplanets. (Watch Jeremy’s TED Talk)

Bendable, morphing wings for aircraft. In Soft Robotics, Neil Gershenfeld and a team of researchers describe a new bendable, morphing wing that could create more agile, fuel-efficient aircraft — as well as simplify the manufacturing process. A long time goal of researchers, previous attempts used mechanical control structures within the wing to deform it, but these structures were heavy, canceling out any fuel-efficiency gains, and they added complexity. The new method makes the entire wing the mechanism and its shape can be changed along its entire length by activating two small motors that apply a twisting pressure to each wingtip. (Watch Neil’s TED Talk)

A deadly Ebola mutation. New research suggests that a mutation in the Ebola virus may be responsible for the scale of the epidemic that began in 2013 in West Africa. The research, conducted by a team of researchers that included TEDster Pardis Sabeti, showed that roughly 3 months after the initial outbreak, and about the time the epidemic was detected, the virus had mutated. The mutation made the virus better suited for humans than its natural host, the fruit bat, which may have allowed the virus to spread more aggressively. Working independently, another team of researchers came to a similar conclusion, but the role of the mutation in Ebola’s virulence and transmissibility still needs to be clarified. (Watch Pardis’ TED Talk)

The future of transportation. Bjarke Ingels’ firm (BIG) released its design plans for a hyperloop system that would connect Dubai and Abu Dhabi in just a 12 minutes, a journey that now takes more than two hours by car. With a system of autonomous pods, the group hopes to eliminate waiting time; their design reveal includes conceptual images and video showing from start to finish what the passenger experience would be like. BIG made the designs for Hyperloop  One, one of the companies racing to make Elon Musk’s concept a reality. (Watch Bjarke’s TED Talk)

The world’s tallest tropical trees. Greg Asner has identified the world’s tallest tropical tree using laser scanning, along with 50 other record-breakers. The tree, located in Sabah, Malaysian Borneo, stands at 94.1 meters tall or, as Asner said for comparison, about the height of five sperm whales stacked snout-to-fluke. He measured the tree using a laser scanning technology called LIDAR (for Light Detection and Ranging), and since the measurement was taken remotely, they are unsure of the exact species of the tree, but think it is likely in the genus Shorea. Discoveries aside, Asner is still analyzing this new data about the forests, which he hopes to make publicly available so that policymakers can make more informed conservation plans. (Watch Greg’s TED Talk)