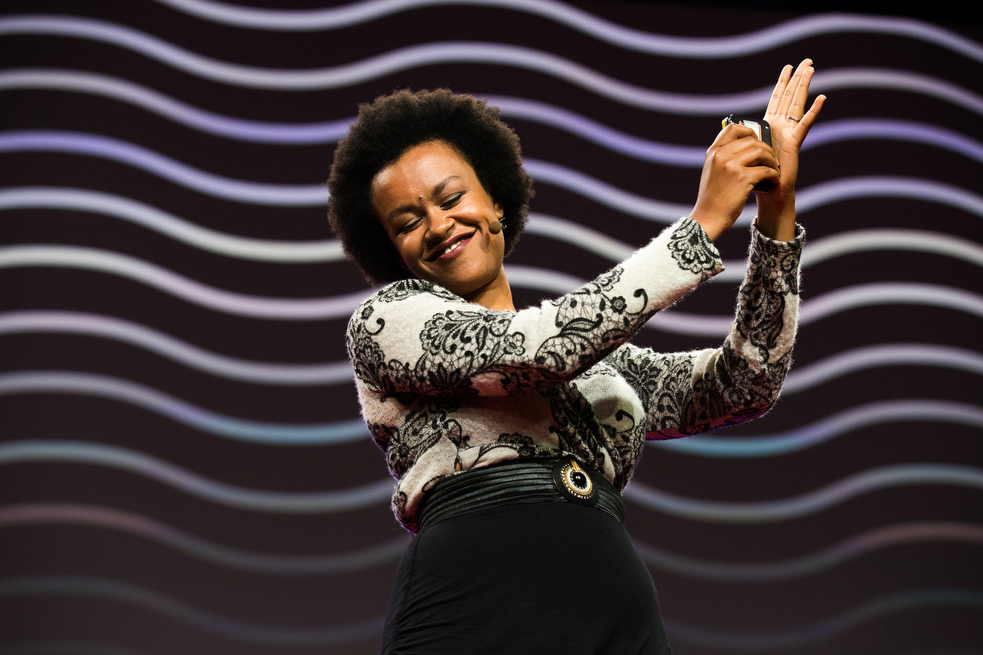 Meklit Hadero finds inspiration for her music all around her — as she listens to the calls of birds, and to the way human voices rise and fall in pitch. She showed how she shapes these influences into songs in Session 1 of the TED Fellows Retreat. Photo: Ryan Lash/TED

Tides are strong. They move swiftly, sweeping all toward the shore. But TED Fellows refuse to simply drift with the water. They are innovators, advocates and artists who challenge the status quo and work in the spaces between disciplines.

At the second TED Fellows Retreat — held from August 25-28, 2015, and themed “Swimming Against the Tide” — about 300 of these change-makers gathered at the Asilomar Conference Grounds in Pacific Grove, California, for a week of workshops and bonding. The highlight: three sessions of talks, hosted by Tom Rielly, in which Fellows shared their ideas. The scope ranged from how medical tests can be done at the kitchen table to how a series of experimental prisons illuminates the way we think of prisoners as ghosts.

Tap dancer Andrew Nemr started the program with a performance by his dance company, Cats Paying Dues. As a video showed a wave crashing on a beach, they created a ripple effect of rhythm with their feet.

Then, on to the talks in Session 1:

— Meklit Hadero on how the song of woodlarks, the pitch of language and even the little noises we hear in silence can teach us a lot about musicality

“I have dedicated the past 20 years of my life to the research and conservation of tapirs in Brazil. At the moment, I’ve been thinking really hard about the impact of my work. … Am I being effective in safeguarding their survival? Or am I just documenting their extinction?”
— Patricia Medici on how a misunderstood mammal in her country actually fuels biodiversity 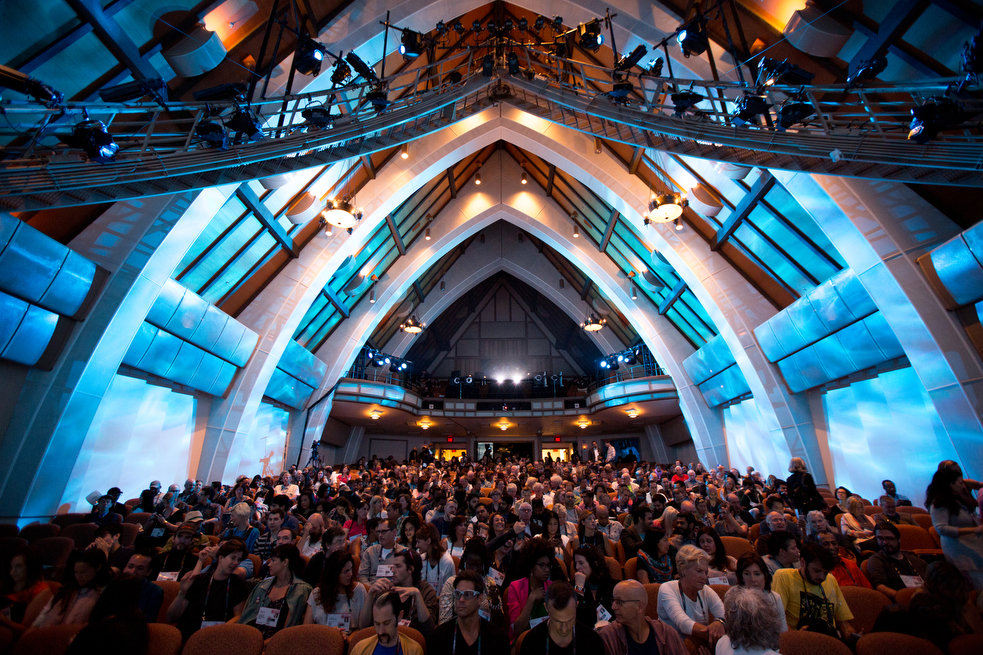 TED Fellows Retreat sessions took place at the Sunset Center Theater, a space that gave a sense of sacredness to the talks. Between sessions, Fellows conspired about potential collaborations. Photo: Ryan Lash/TED

“When I was younger the sound of my voice / Always seemed to catch me off-guard / So I trained my teeth to become barricade to keep words out.”
— Lee Mokobe on how slam poetry helped him overcome selective mutism

“We cannot be the most excellent expression of our collective genius without the full measure of humanity brought to bear.”
— Astrophysicist Jedidah Isler on how women of color in STEM are uniquely positioned to explore unasked questions

“Shapes are an interface for thinking. They affect and influence the very questions we ask. … Shapes help us see hidden patterns which are normally invisible.”
— Kaustuv De Biswas as he demos how his platform, Mappr, visualizes data on TED Fellow collaborations

“The further away we look, the further into the universe’s past we’re looking.”
— Renée Hlozek on how the Large Synoptic Survey Telescope will give a closer look at the cosmic history of the universe

“It’s about time that everybody have faith in their own medical ingenuity.”
— José Gómez-Márquez introduces Ampli, a Lego set of diagnostic modules that will let the DIY community build medical tests at home 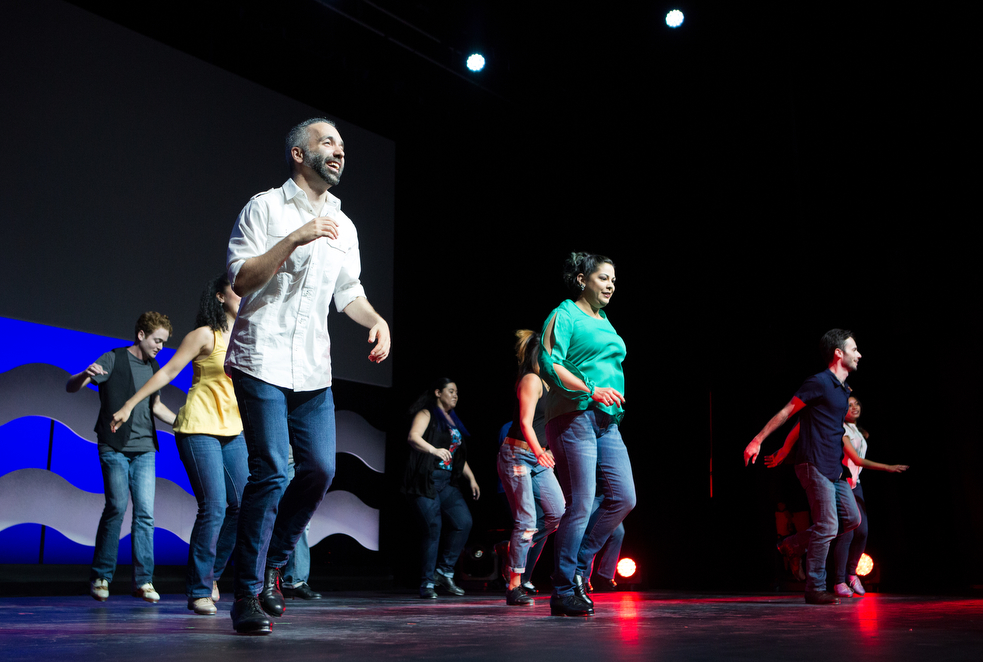 Andrew Nemr invited special guests from the area to join his dance company and tap out Session 1 of the TED Fellows Retreat. Their faces lit up with delight as they did the Shim Sham. Photo: Bret Hartman/TED

The talks in Session 2:

“The cello is an European instrument and it’s generally considered a European tradition. I’m an American. Happily, America has its own growing and diverse tradition of music.”
— Cellist Joshua Roman as he plays pieces by Johann Sebastian Bach and modern composers Mark O’Connor and Mark Summer

“Your goal is not to be charismatic or entertaining, or to tell stories about your life, or your organization, or any of that. Your real goal is to seed an idea in your audience’s mind.”
— Chris Anderson on what makes a great talk, in a preview of his book, Talk This Way!: The Official TED Guide to Public Speaking, out in May 2016

“The Bureau of Prisons describes CMUs as ‘self-contained housing units.’ But I think that’s an Orwellian way of describing black holes.”
— Will Potter on a series of experimental prisons in the US where communication is shockingly limited for prisoners

“I was born deaf and I was taught to believe sound wasn’t a part of my life. Yet I realize now sound was always a part of my life, really on my mind every day. … How is it that I understand sound? Well, I watch how people behave and respond to sound. You people are like my loudspeakers.”
— Christine Sun Kim on how she uses American Sign Language in her art to explore our relationship to art and language

“There are only 32 geometric signs. Only 32 signs across a 30,000-year timespan, in the entire continent of Europe. That is a very small number. If these were random doodles and decorations, we’d expect to see a lot more variation. But instead, what we find are the same signs repeating across both space and time.”
— Genevieve von Petzinger on studying the earliest cave art, and discovering that graphic communication might be much older than we think 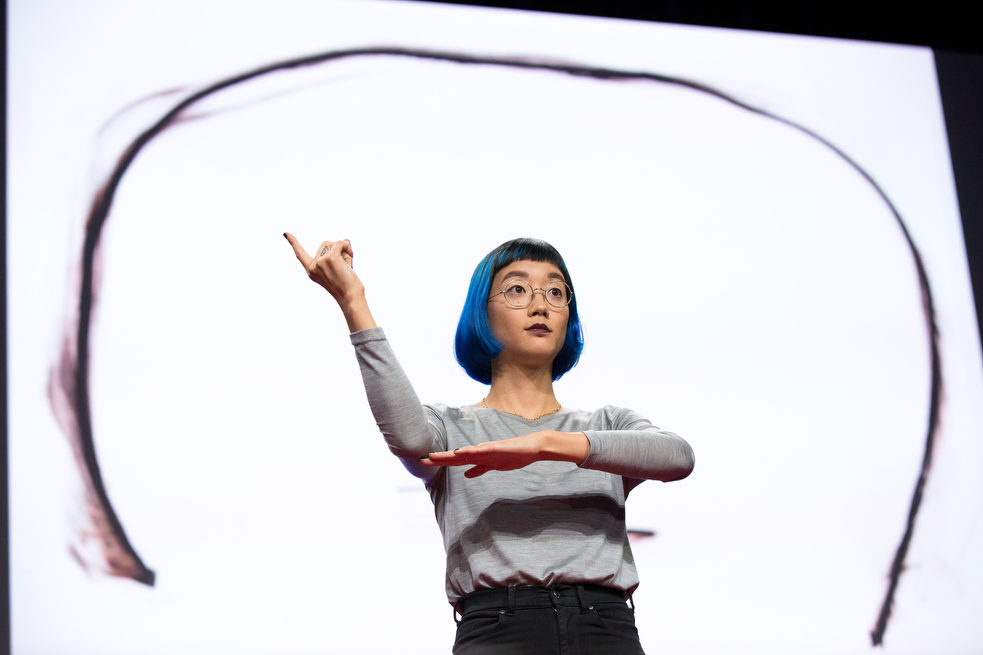 Christine Sun Kim is deaf, but makes sound and language the center of her art. In Session 2 of the TED Fellows Retreat, she asked the audience to sign words and concepts to show them the lyrical qualities of sign language. Photo: Ryan Lash/TED

Session 3 opened with Iyeoka Okoawo singing “Every Second Every Hour.” Then:

“As a human being, it’s not uncommon to feel detached from the real time, when you’re jet-lagged and can’t fall asleep in the night or when you’re daydreaming and miss your stop. … There’s no tool available to us to measure the personal perceptions of different times.”
— Designer E Roon Kang on a personalized clock that rejects the idea of a 24-hour clock for everyone

“What else are we allowing as a society that would shame us in 30 years? … We rationalize the unspeakable, forgetting that foundations that might seem unshakably strong today might crumble in our sleep.”
— Yana Buhrer Tavanier on why she moved from writing articles on the inhumane treatment she saw in mental health facilities in Bulgaria to creating art to make people feel it

“Plastic, oil and radioactivity are horrible legacies. But the very worst legacy we can leave children are lies. We can no longer afford to shield kids from the ugly truth, because we need their imaginations to invent solutions. ”
— Cesar Harada on how, at Maker Bay, kids think about environmental and social problems too

“Fire takes a thing that’s gone solid / a thing that is sleeping, settled in form / and breaks it apart, frees up its element / released to the sky in a storm of delight.”
— Ben Burke performs his poem “Old Friend,” a reflection on fire

“We accept things in our religious lives that we do not accept in our secular lives. … Religion doesn’t just create the roots of morality, it creates the seeds of normality.”
— Chelsea Shields on why she fights for gender equality in the Mormon church

“We have all the things needed to build universal Turing machines out of little droplets of water.”
— Manu Prakash on how an observation about the movement of water drops led to the creation of a fluid-based computer

The day closed with a final performance from Meklit Hadero and her band. And the audience left the auditorium with something TED Curator Chris Anderson said hanging in the air: “If you were to take all of the ideas in the world that matter, a shockingly high number of them are represented in this room — right here, right now. The reason you’re a TED Fellow is because we thought that you were doing work and creating an idea that deserved to be more widely shared.” 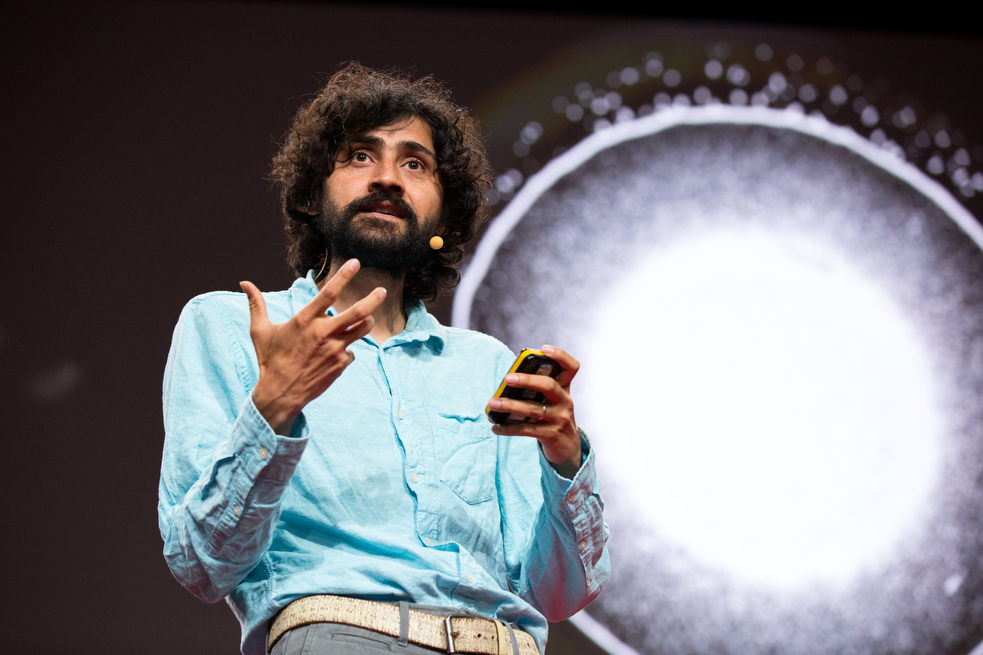 Manu Prakash invents ways to make scientific equipment affordable for all. In Session 3 of the TED Fellows Retreat, he spoke on the decade of thinking behind his water computer, and gave the audience a kit to test the concepts at home. Photo: Ryan Lash/TED